Bunuba man Jandamarra grew up at a time when British pastoralists were moving into the Kimberley. Schooled in the traditions of Bunuba culture, he worked in the new settlers' world before leading a war of resistance.

Explore how his life and death still resonate today.

This history teaches us that no matter how much we lost ... we were not defeated. When a stand is made that was as strong as the Bunuba’s, it is never final. Their call for justice, freedom and equality sings out across time. 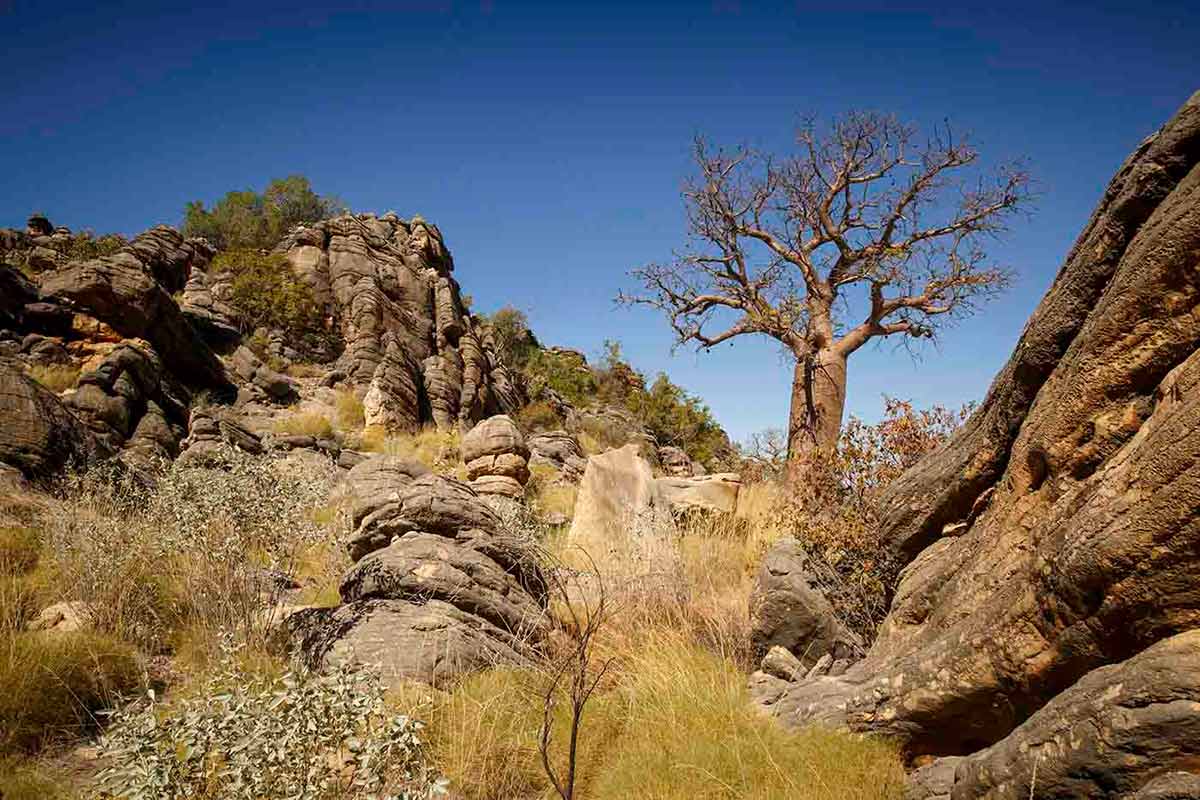 The Kimberley region of Western Australian attracted the attention of colonists keen to exploit the natural resources of the region. Early European explorers reported vast tracts of good pastoral land, which led to the introduction of livestock. Violence between the Bunuba people and the British colonists erupted soon after, in the 1890s.

Jandamarra was born and brought up in Bunuba country as a Bunuba man. But as he grew he also experienced life with the colonists. He worked as a stockman and later, with a policeman called Richardson, he helped to track down Aboriginal people.

One day Jandamarra helped capture a group of his own people, including his uncle, who reminded him of his cultural obligations. That night Jandamarra killed Richardson, set his relatives free, and began a campaign of resistance against the settlers. 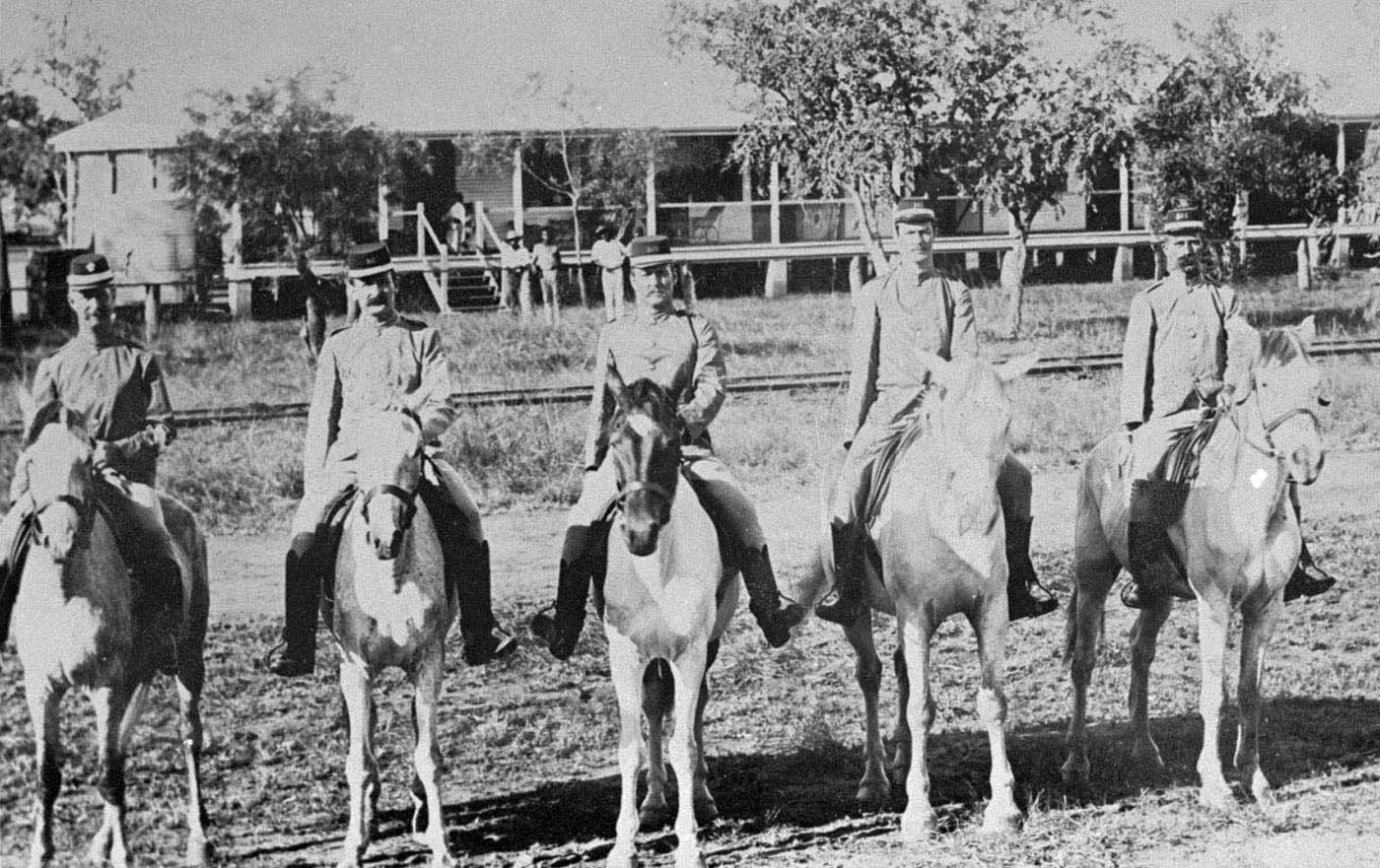 Police Sub-Inspector Craven Harry Ord, who was in charge of the police at Derby during the 1890s, was sent to hunt down Jandamarra.

Pigeon [Jandamarra] and party must be got rid of forthwith. The fact of his being at large is a disgrace to the police. Head the party and let us hear no more of Pigeon.

A former police tracker, equipped with British weapons and Bunuba knowledge of country, Jandamarra baffled and terrified the colonists in a two-year campaign of resistance.

It would not matter if the whole British army were sent here, [Jandamarra] would still laugh at them from the top of the range.

In 1899 he sent it to the British Museum with this note:

I  had managed to accumulate a quantity of native weapons and thought they might be of value or interest to the museum … In any case, the weapons are genuine native weapons of the type taken by police from native camps. 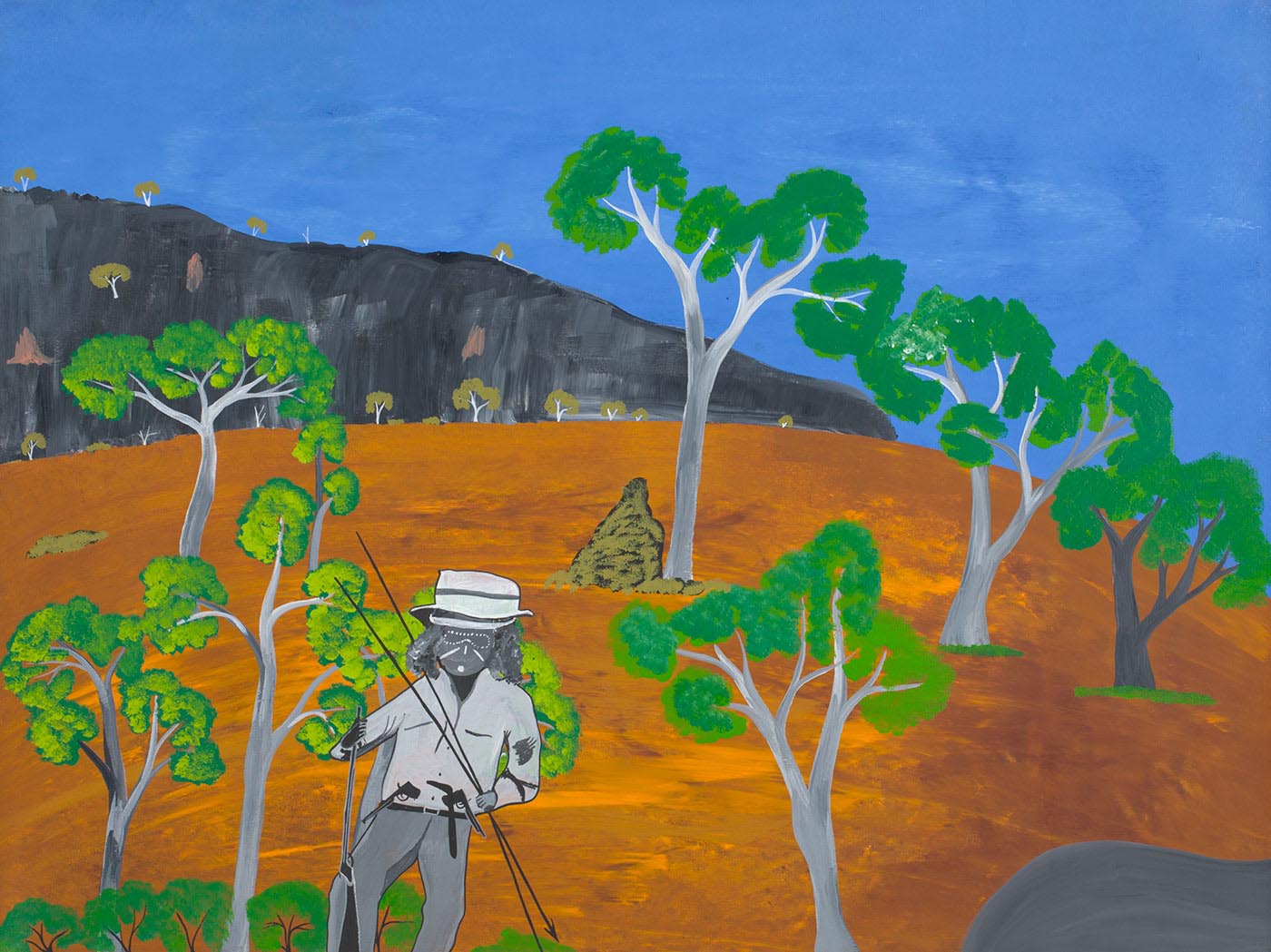 Preparation for Battle at 6 Mile Creek by Jack Macale

Eventually, the police brought in an Aboriginal tracker called Micki, from the Pilbara. Jandamarra’s fight ended at Tunnel Creek on 1 April 1897, when he was shot dead by Micki. The police then beheaded the body.

Today, Jandamarra is remembered as a heroic figure in the Bunuba resistance.

As far as we’re concerned, Jandamarra lives on. His spirit lives on, his people still live on. His spirit is carried in this country by people who speak the same language as he did.

Like Bunuba objects made of wood and iron, Jack Macale’s painting of Jandamarra references the entangled worlds people like Jandamarra inhabited. Macale shows Jandamarra wearing British clothes with his face painted before his final battle with the police. He carries a boomerang and spears, pistols and a rifle.

As a boy, Niyikina elder Larry Kunamarra fought alongside Jandamarra, and was shot in the leg by the police. His granddaughter Eileen Benning recalls, ‘He used to show us where he got shot — the scar’. After recovering, he joined the police as a tracker.

In 1954 the Derby township raised funds to send Larry Kunamarra, ‘Tracker Larry’, to Perth to receive a Coronation Medal from Queen Elizabeth II, recognising his long service as a police tracker. In exchange, he presented the Queen with a boomerang made by fellow Kimberley man Yumagora.

The Queen accepted the gift with pleasure ‘as a token of the loyalty and affection of the tribe’ and she asked that Kunamarra convey her thanks.

I remember — when he came back he never stopped talking about the Queen ... ‘A very nice woman’. He was very proud to go down there.

The memory of Larry Kunamarra is kept alive by his granddaughters, all Niyikina elders.

See a performance of 'Jandamarra — Sing for the Country'

Watch this video of the Sydney Symphony Orchestra performing Jandamarra — Sing for the Country (Ngalanybarra Muwayi).

Activity: Take notes to record what you see and hear in these categories:

What message do you think this performance is trying to communicate?

What do you know about the west Kimberley?

Look closely at the painting Preparation for Battle at 6 Mile Creek by Jack Macale, pictured above. It has clues that Jandamarra inhabited an Indigenous world and a British world. What are these clues?

Have a class discussion about why you think Jandamarra is remembered as a leader of his people.