Explore the impact these encounters had on the Gudang people and their responses today. 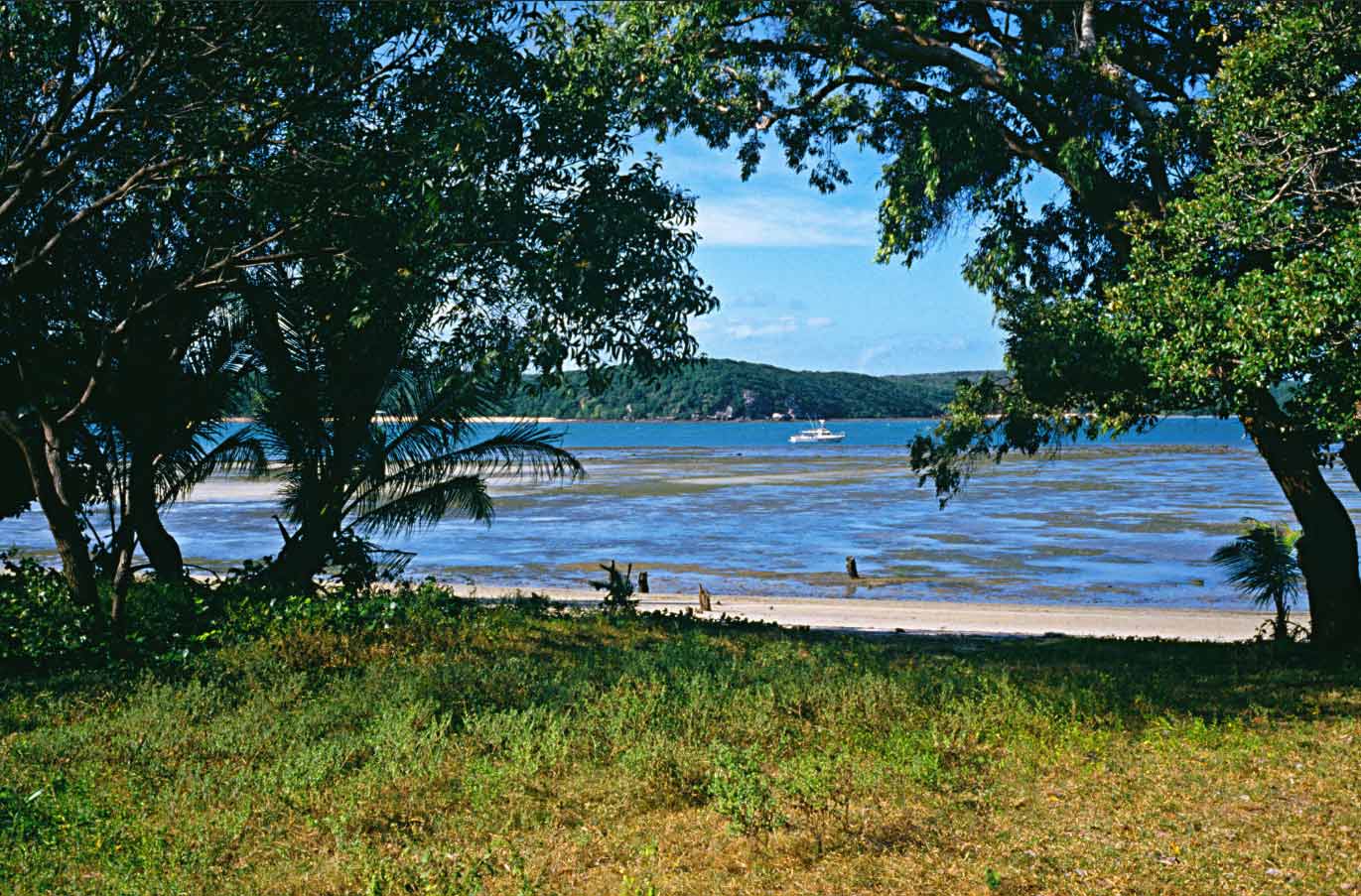 Colonial authorities established Somerset on Gudang country in 1864. At the tip of Cape York Peninsula, it was planned to be a port and administrative centre for the Torres Strait region, but this remote colony became a violent place presided over by the infamous Jardine family. A missionary report noted that ‘Jardine ruled with a Terry rifle with 47 notches on its stock’.

William Kennett, an Englishman who was one of two staff at the short-lived ‘Society for the Propagation of the Gospel in Foreign Parts’ mission at Somerset, attempted to mediate the violence between the Aboriginal and Torres Strait Islander people and the colonists. He took great interest in local culture, collecting objects, taking photographs and learning the languages.

Despite Kennett’s work, people today only remember the ‘Jardine time’.

Not so many dingos in this area anymore. This is interesting, I never would have thought they put a tail on their heads. Maybe [a] necklace?

I collected [the objects] during a two years residence [1867–68] amongst the natives near Cape York. The collection is I believe complete, comprising every weapon, article of dress, or ornament etc. used or manufactured by those natives.

On his return to England, Kennett displayed these objects and photographs at the Manchester Missionary Exhibition of 1869–70. It was from here that Franks acquired material, including this headband, for the British Museum. 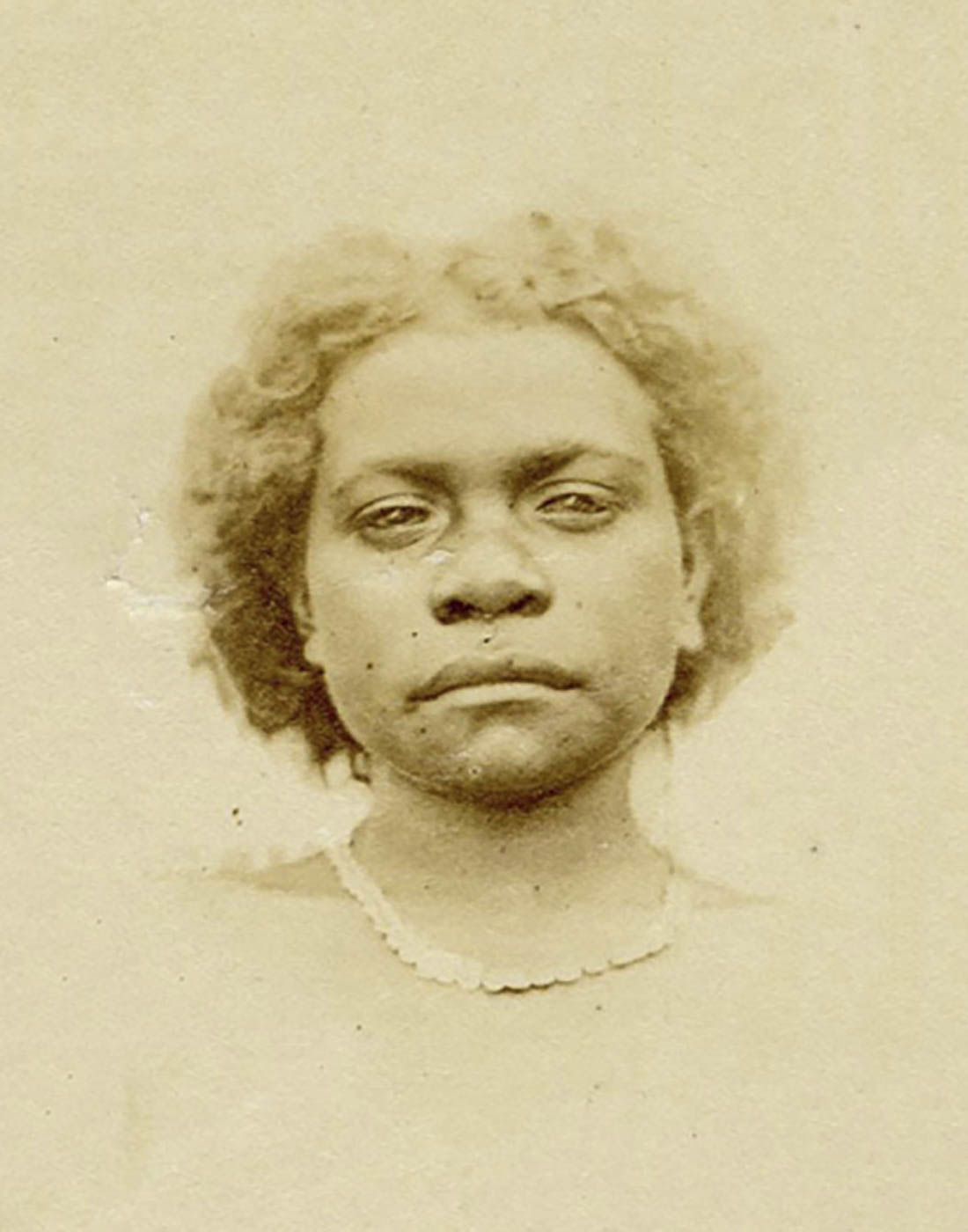 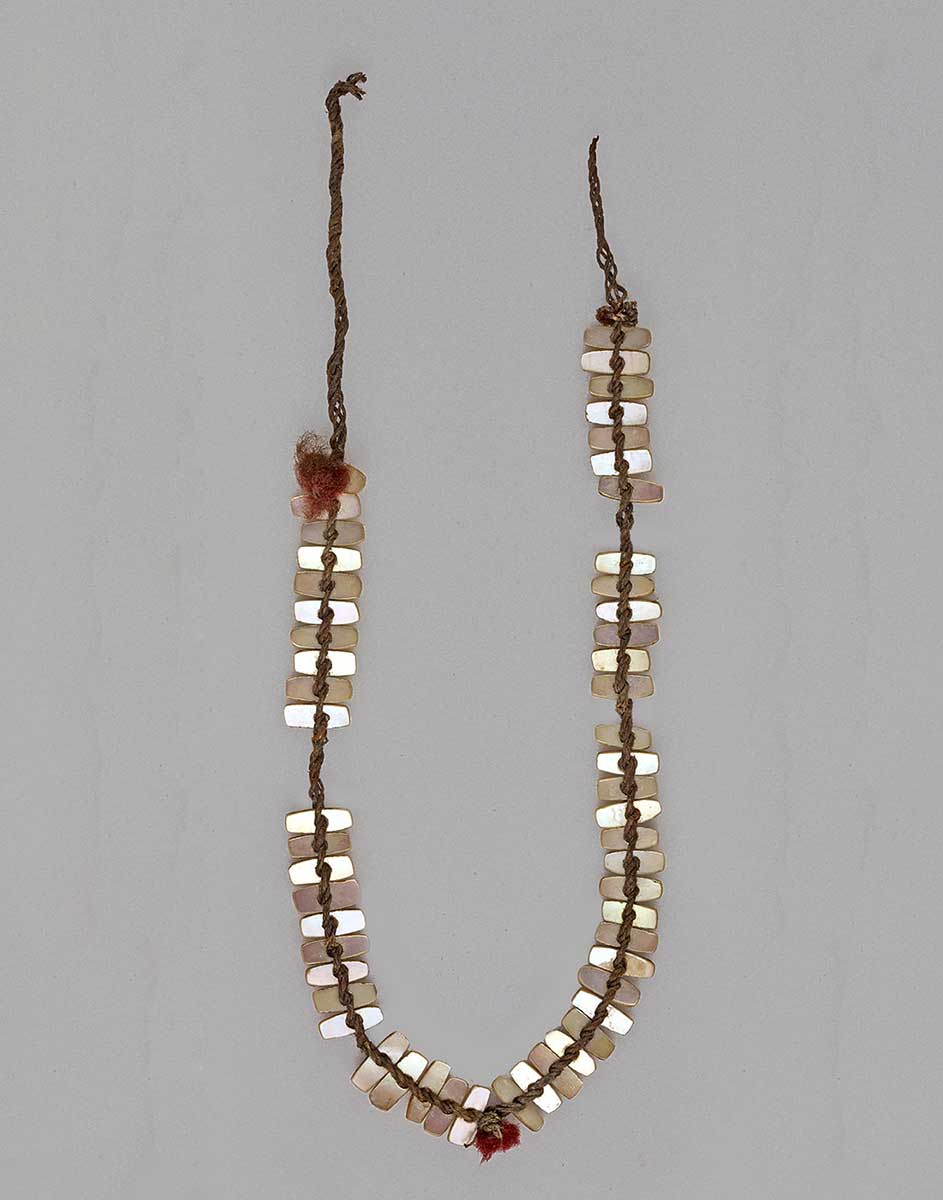 Portrait of a woman from Cape York

There is a local story in Symondsbury, England, that when Kennett left Cape York, he took a young Gudang woman back with him — along with a wallaby — to the Dorset village where he was headmaster. This photograph of a Cape York woman also appears in a 19th-century Symondsbury School photo album with the caption:

So sad and far from home …

This looks like the necklace the lady is wearing in the old photo. We don’t see this kind anymore. We do the necklaces differently now.

One hundred years before Jardine and Kennett were residents of Somerset, James Cook sailed around the tip of Cape York, ‘claiming’ the east coast of Australia by hoisting the British flag on Possession Island.

The story that my dad told me is when Cook sailed through the Torres Strait he put a flag on Possession Island. The Gudang are seafaring people and they often travel to the island and saw the ‘cloth on a stick’ stuck in the sand on the beach.

In their innocence, my people’s innocence, they grabbed that and used it as a blanket and covering. ‘Flag’ was not a concept they knew of.

I painted the traditional Gudang woman as she covered herself and her baby in that cloth because they didn’t know what that cloth was or what it meant or [has] come to mean centuries later. 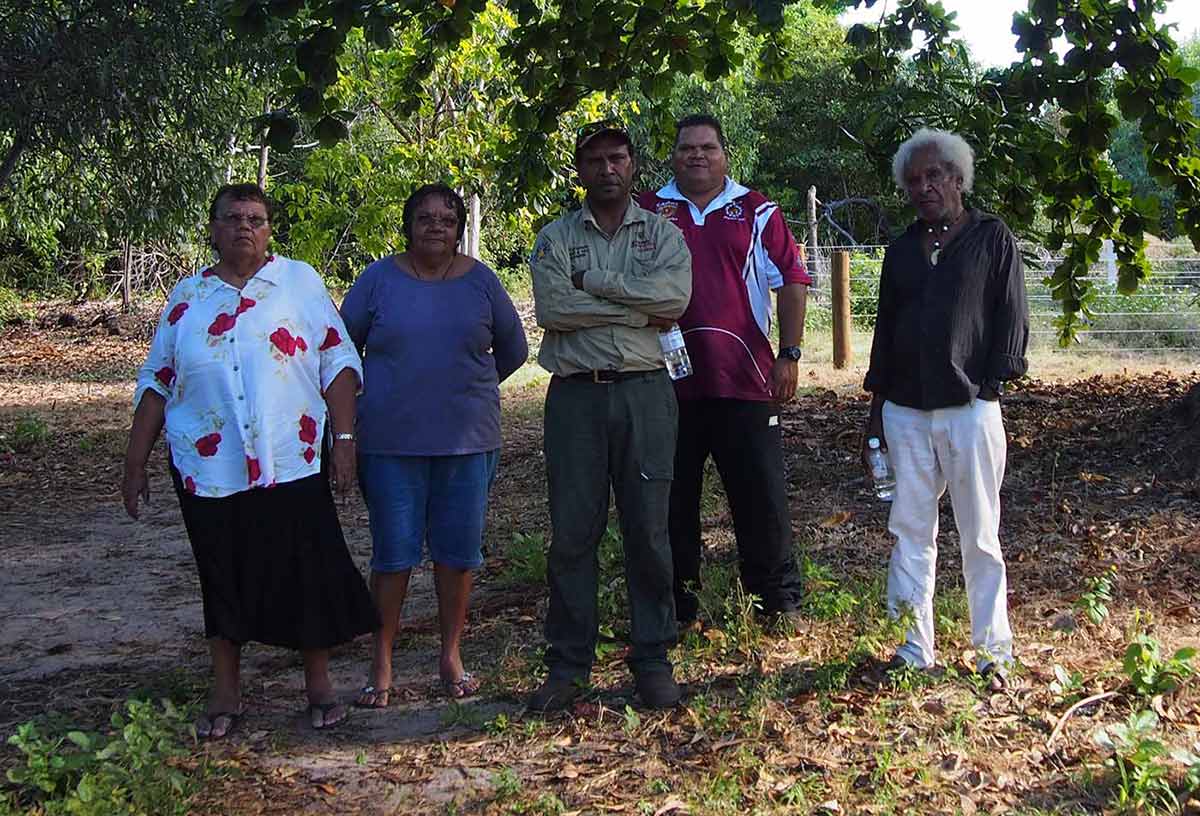 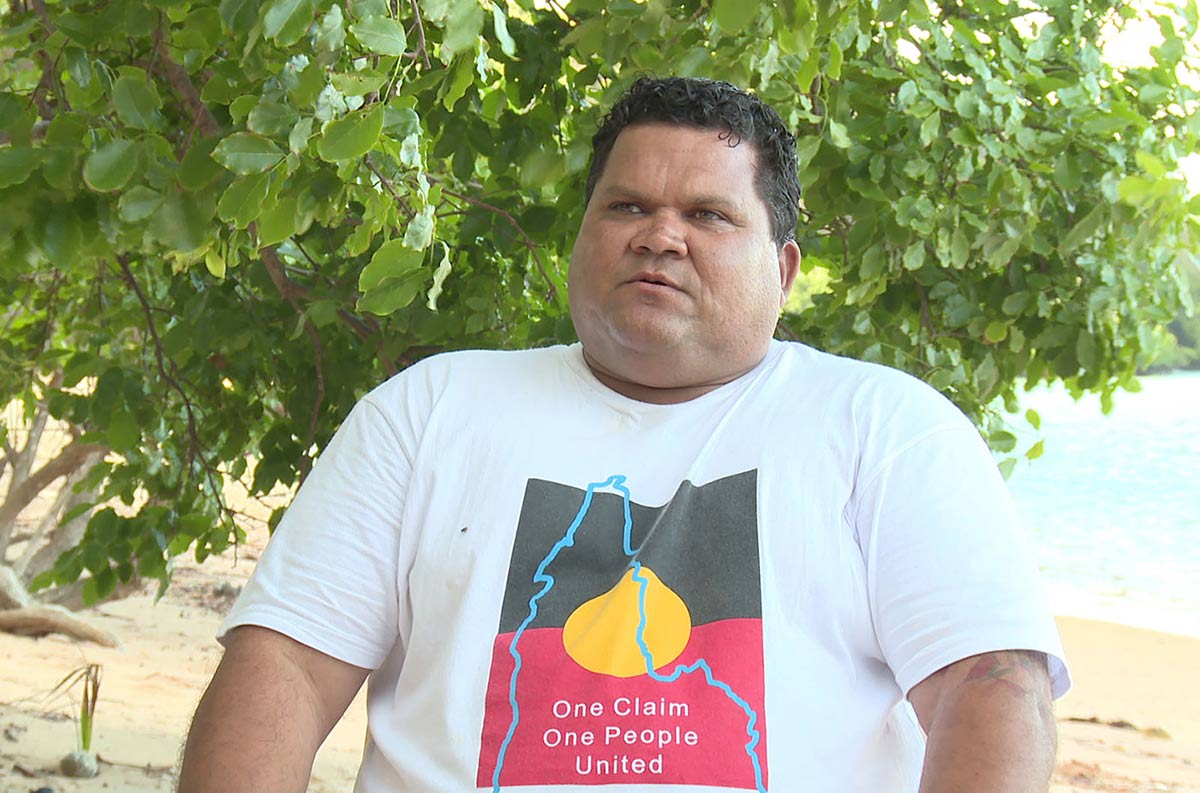 Learn about the meaning of of objects

Watch this video where Gudang-Yadjaykenu traditional owner Nicholas Thompson-Wymarra talks about the history of Somerset and the meaning of objects.

Activity: Objects can carry different meanings, for different people at different times. Choose one of the objects from Gudang country shown above and examine what it might mean to:

How much do you know about Somerset?

Examine the images and text above, especially ‘Setting the scene’ and read this quote by Aunty Maryann Mayor, a Gudang elder, in 2014:

What history is Aunty Maryann referring to, and why do you think it prevents people living in an otherwise beautiful place? Jot down words or phrases that come to mind. After a couple of minutes, share your perspectives, then work in pairs or small groups to identify common themes or surprising responses.

This activity has been drawn from the class ‘wraparound’ discussion outlined on the Facing History and Ourselves website.