The rainforest peoples of coastal far north Queensland fought a guerrilla war in the 1860s against colonists attracted by opportunities for agriculture and goldmining.

Explore how, despite the violence of these encounters in which whole families and clans were lost, the cultures of this area flourish through rich art making traditions and connections to country.

People who come to live here — they think this is paradise. They see the scenery but they don’t see the blood. 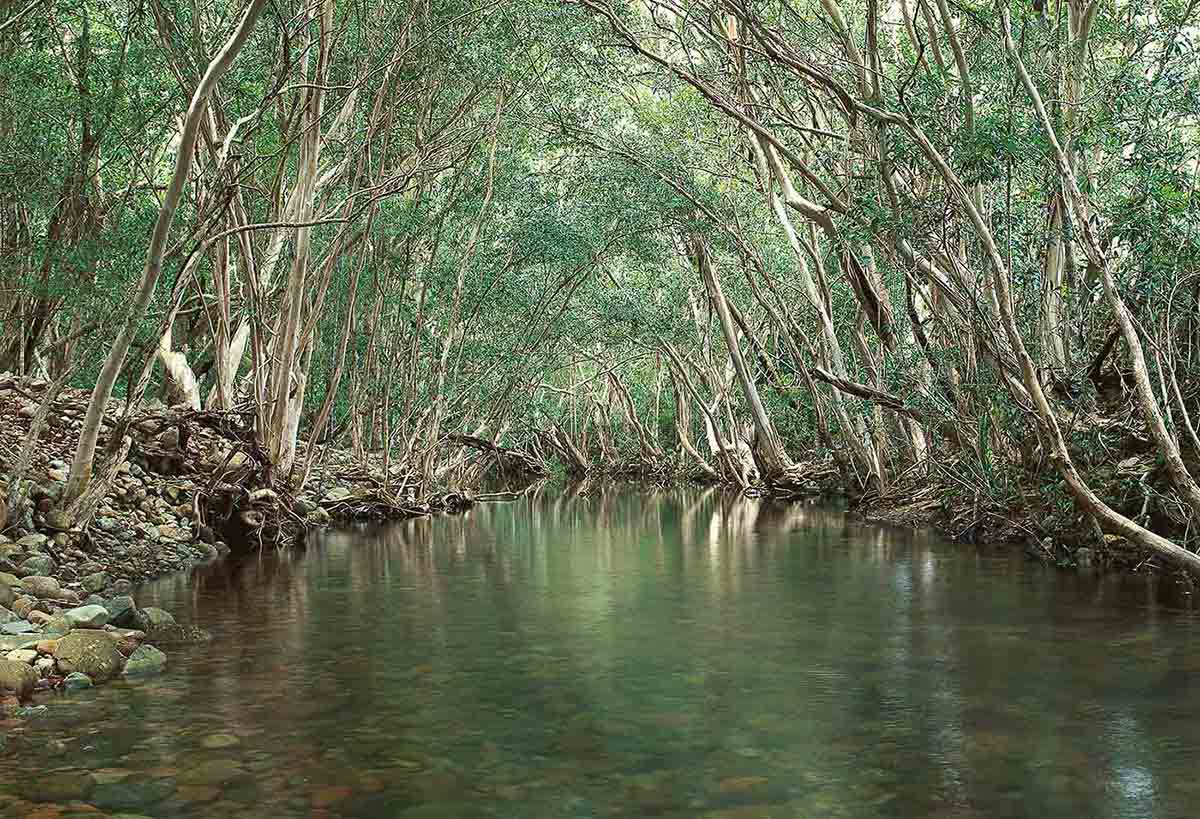 The rainforest peoples of far north coastal Queensland fought a guerrilla war against colonists in the 1860s. Lives and cultures were violently disrupted, in an episode of history that continues to reverberate among local communities.

John Ewen Davidson came to Rockingham Bay in 1866 and for two years tried to establish a sugar plantation. He collected objects at Rockingham Bay, including a shield and basket. Davidson began as a shocked observer of the violence of the occupation, yet within six months he was part of it.

Aboriginal people living in the area today have ancestors who died in these conflicts and they continue to struggle with a history in which whole families and clans perished. For people today, these objects remain tied to that painful moment in their history.

I could never understand how a person with Christian values could do that type of thing. Bring that fella back. I would like to have a talk with him.

There was a patch of ground where the cattle would go and lick it. It was because there had been bodies buried there and they were licking the salts that come out of the ground. 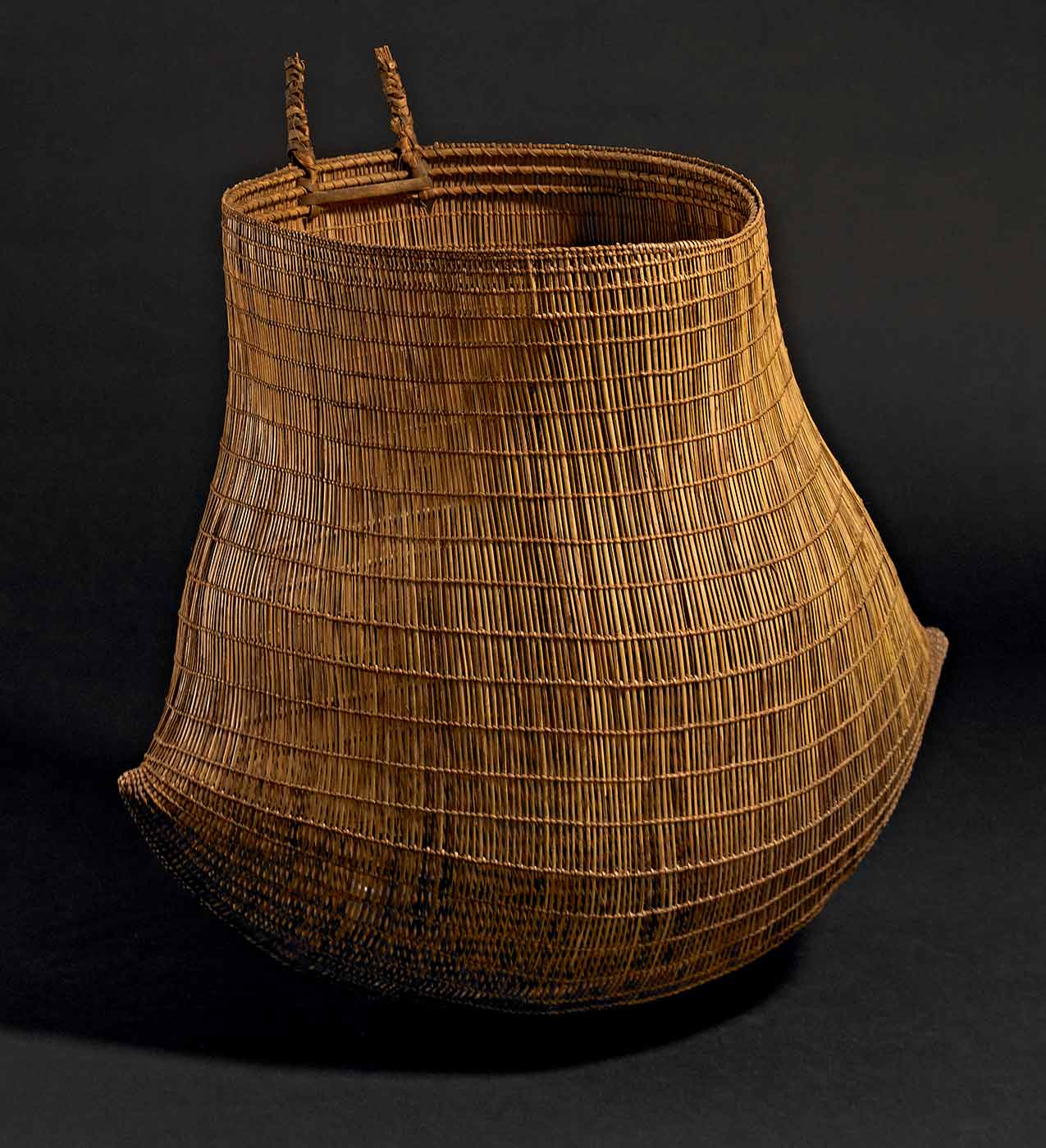 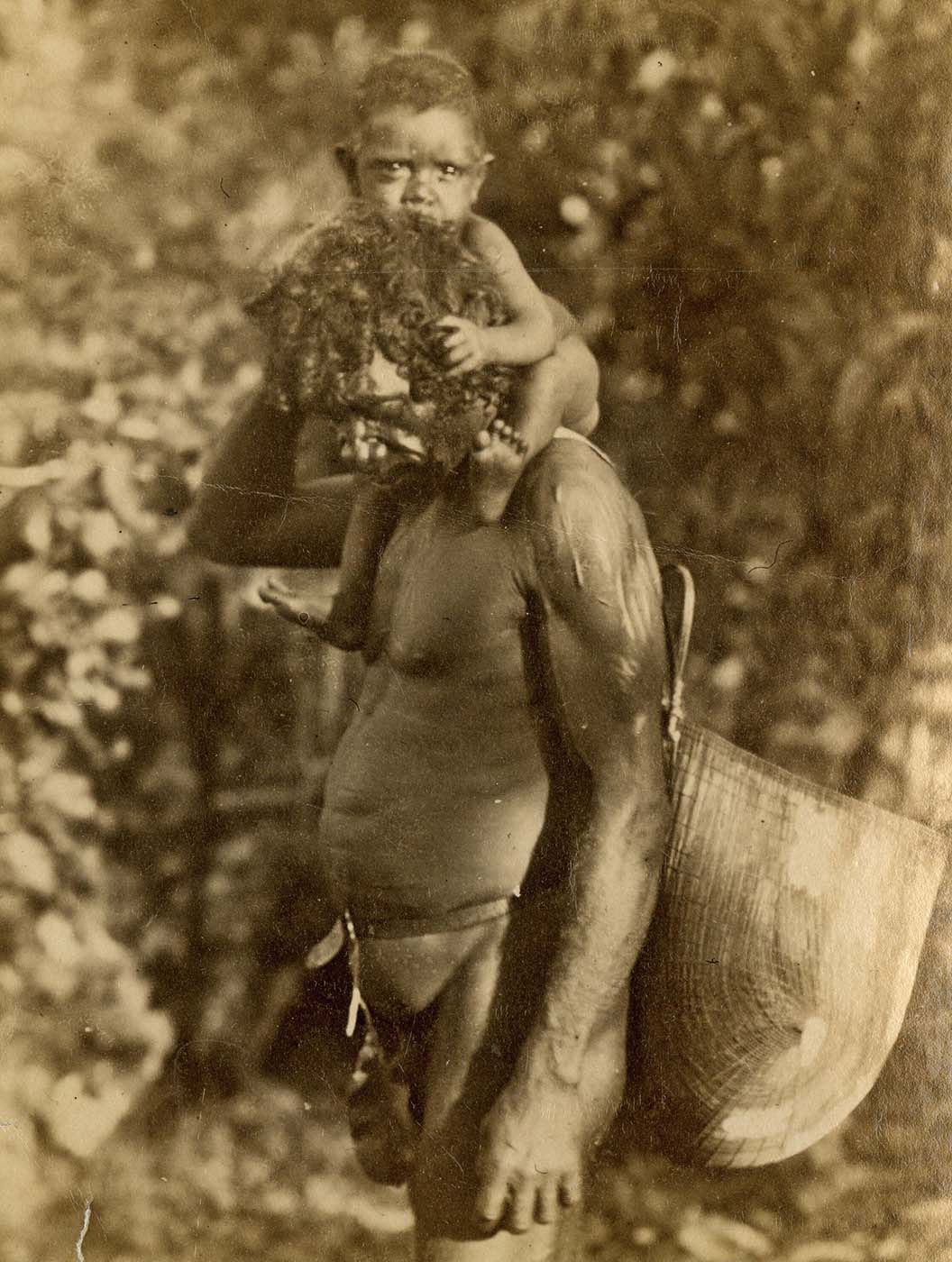 These baskets are unique to rainforest peoples of the Rockingham Bay region. They were woven from lawyer cane and used to carry food. People placed them, filled with rainforest fruits, in running streams to leach poisons out of the fruit. Larger baskets were also used to carry children.

The old people used to make a ... big basket just to carry their babies in the back when they go digging scrub. And they’ll hang ’em up on the side on a tree ... then they’ll dig whatever they’re looking for ...

Man and child with a jawun (basket). Handley and Atkinson Studio, Cairns, Queensland. © The Trustees of the British Museum

This postcard recalls violent times. The message on its reverse, from an unknown sender to an unknown recipient, states:

This is a photo of an old Snider carbine used in early years by native police — The marks on the stock are the ‘tally’.

The 1860s was a time of escalating conflict between settlers — aided by the Queensland Native Police force — and Aboriginal people.

John Ewen Davidson’s detailed diary of his time at Rockingham Bay reveals his involvement in the violence of the Queensland frontier.

The blacks … made their appearance yelling & screaming in a large mob of about 40: they halted at the garden fence about 50 yards from the humpy … we gave them a volley when they … retreated; but [they] did not run or throw away their swords & shields. We followed them up into the scrub firing at them as they went. Some were wounded, but I saw some killed …

My [Calisher and] ‘Terry’ [rifle] acted well but the cartridges jammed in Thomas’s ‘Wilson’ which was therefore worse than useless. 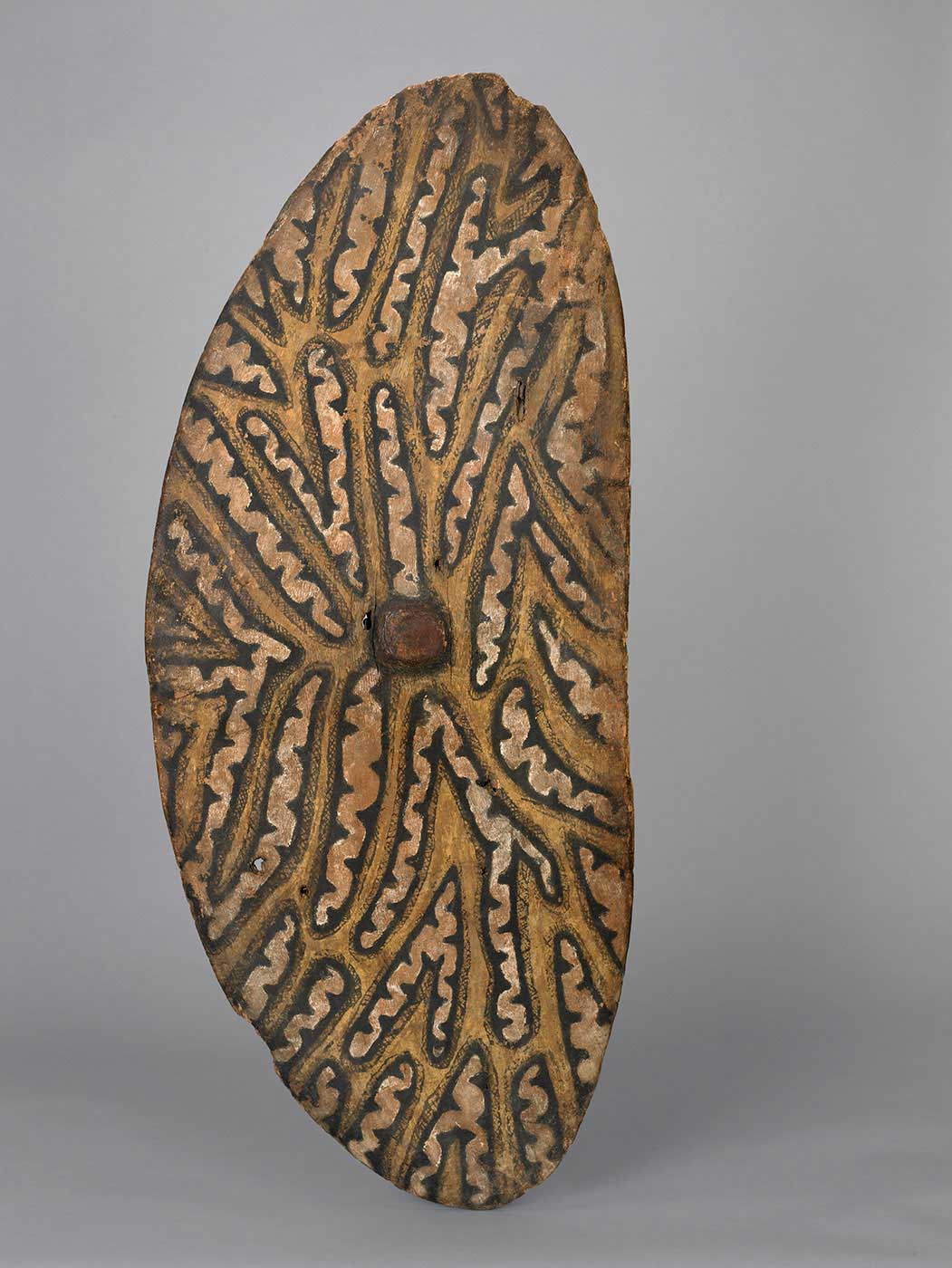 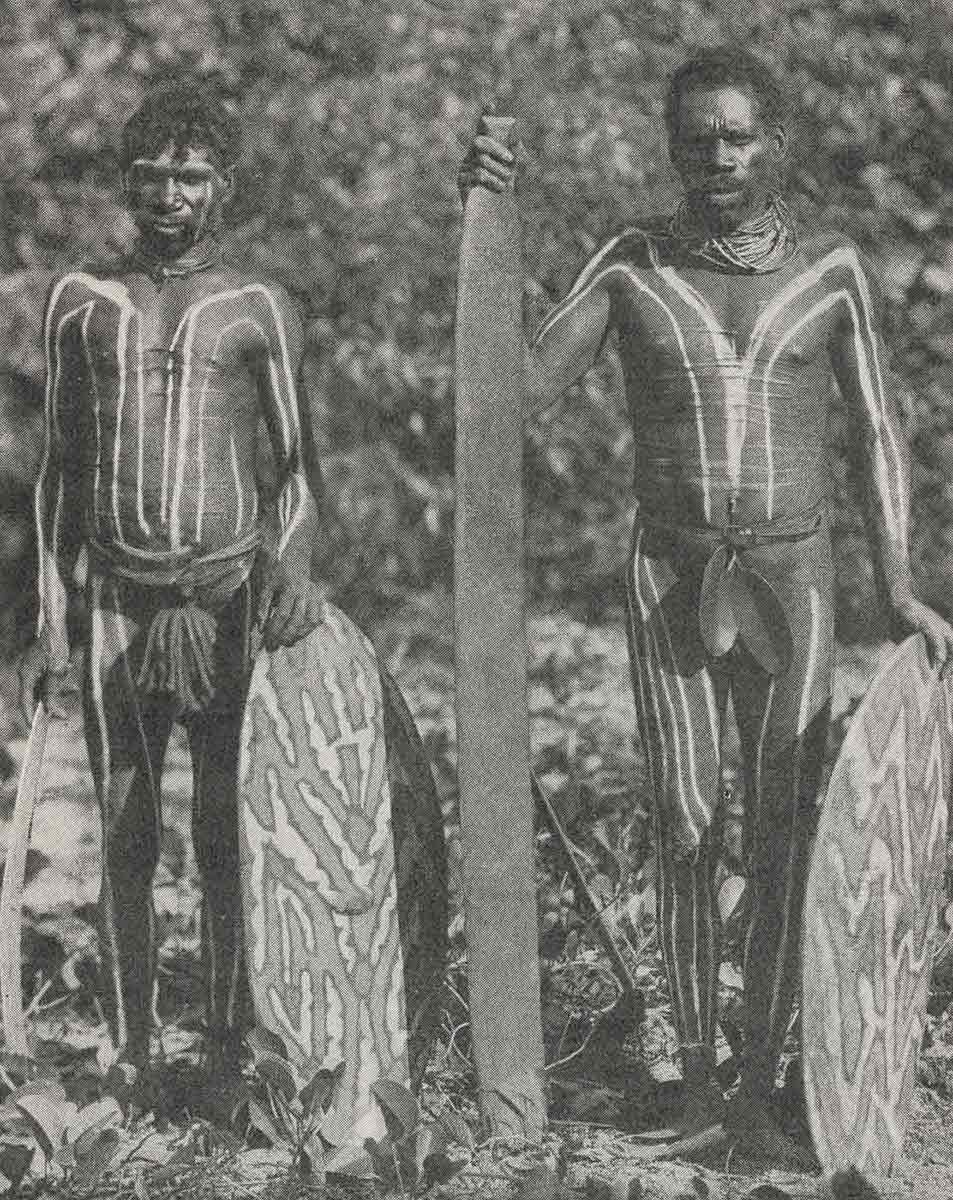 Aboriginal people living in the area today have ancestors who died in the violence of the 1860s and they continue to struggle with a history in which whole families and clans perished. For people today, these objects remain tied to that painful moment in their history.

You’d never give away your shield or sword, they’d have to kill you to get it. They wouldn’t be just left lying around in their camp. To pick up stuff in a camp you’d have to have no-one in the camp. So you’d wonder where the people were — either hiding or they’d been killed.

That looks very much like a Gulnay shield from the Tully River, where Davidson said he raided that camp — that’s the shield design from there, that area. That’s a mark of that area ... It’s interesting these shields haven’t been used in a fight, because they’ve got no marks on them. They might have made it and hadn’t had time to use it. Don’t forget, it would have been hard to have a corroboree there with native police riding around shooting anything they saw that moves.

Shields like these are unique to the rainforest cultures of coastal far north Queensland. One observer described how they were used.

Each held the shield aloft horizontally and twirled the sword rapidly round his head with the right hand … Their movements were done with the rapidity of lightning. 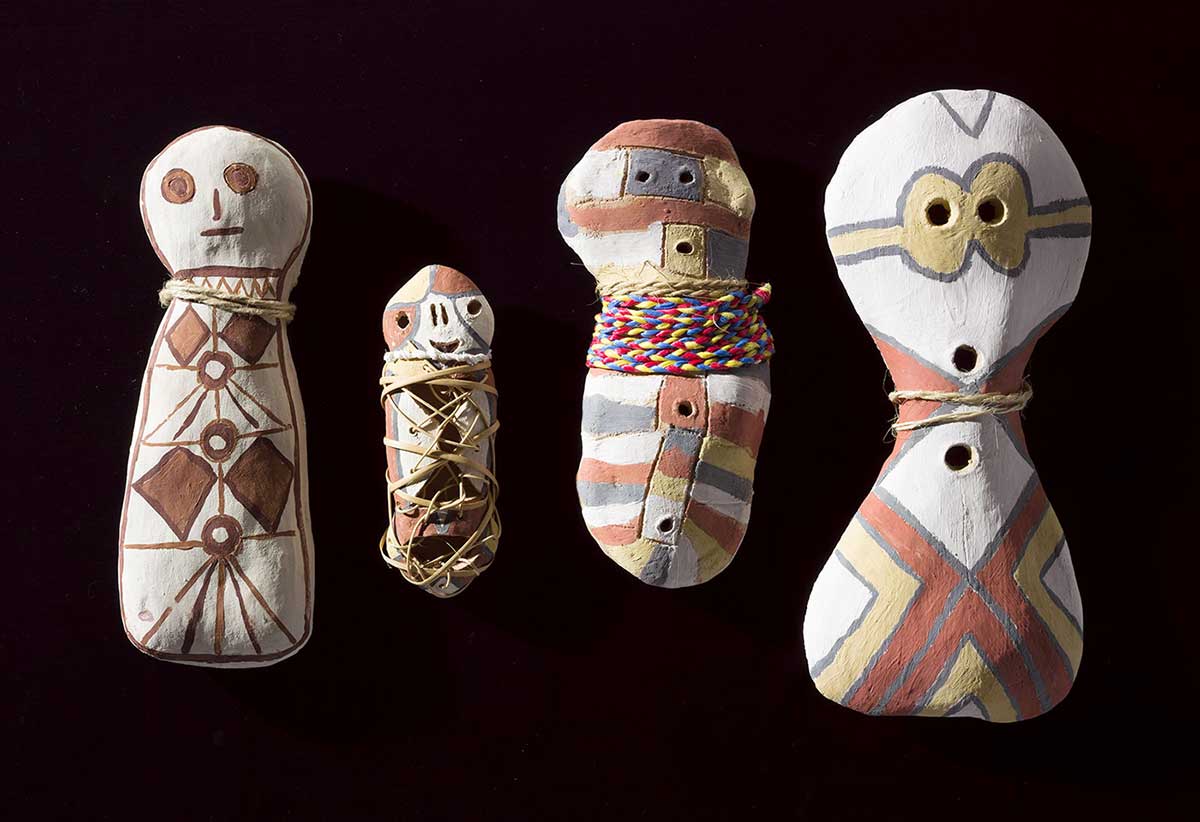 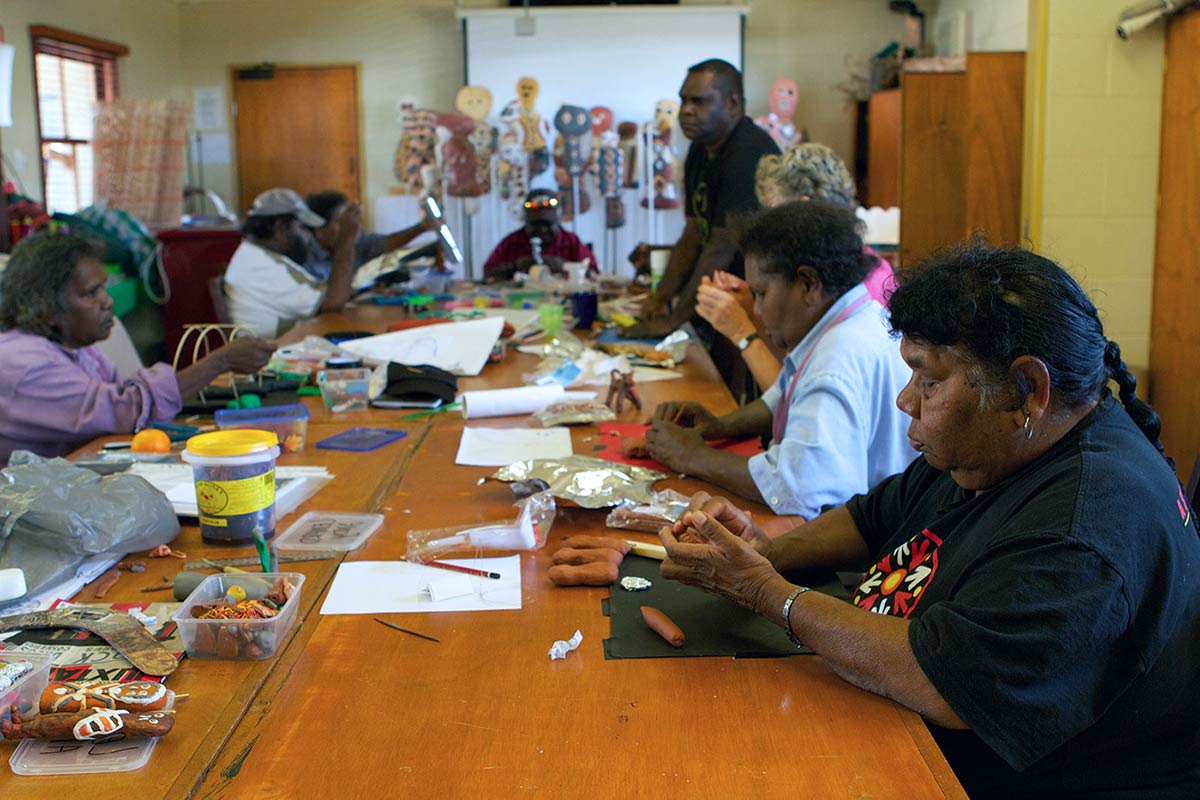 Aboriginal people in Cardwell continue to connect with their heritage in new ways. The bagu figures on show in the Encounters exhibition were made by artists from the Girringun Aboriginal Art Centre in Cardwell, which represents artists from nine groups: the Bandjin, Djiru, Girramay, Gugu Badhun, Gulnay, Jirrbal, Nywaigi, Warrgamay, and Warungnu peoples.

Learn about the ancient craft of basket weaving

Watch this video of Girramay traditional owner Abe Muriata talking about reviving the ancient weaving techniques of his ancestors.

Activity: In groups, discuss where and how Abe learned to weave baskets, what the baskets are made of, why he wants to learn this skill and how long it takes to make a basket.

Learn about making bagu in the rainforest

Watch Jirrbal and Girramay traditional owner Theresa Beeron talk about the meaning behind her bagu.

What do you know about Rockingham Bay?

Have a class discussion about what you think is meant by the opening quote from Djiru Traditional Owner Leonard Andy:

People who come to live here — they think this is paradise. They see the scenery but they don’t see the blood.

Consider how this quote relates to the message on the postcard pictured above, especially the term ‘tally’.