Aboriginal people from the Shoalhaven region on the south coast of New South Wales marked their country with hand stencils and tree carvings.


Just up the river here, up around that cave near Longreach, there’s numerous hand stencils there. Some are high, some are children’s hand stencils.

Aboriginal people from the Shoalhaven, on the south coast of New South Wales, have a long tradition of marking the landscape. Hand stencils line the walls of a cave along the Shoalhaven River, and the trunks of trees were once patterned with carvings.

Marks of identity are also found on shields.

James Backhouse, Narrative of a Visit to the Australian Colonies, 1843:

The figure of a hand is occasionally depicted, by means of a white powder, thrown on before the black is dry, or the whole is dotted with white. 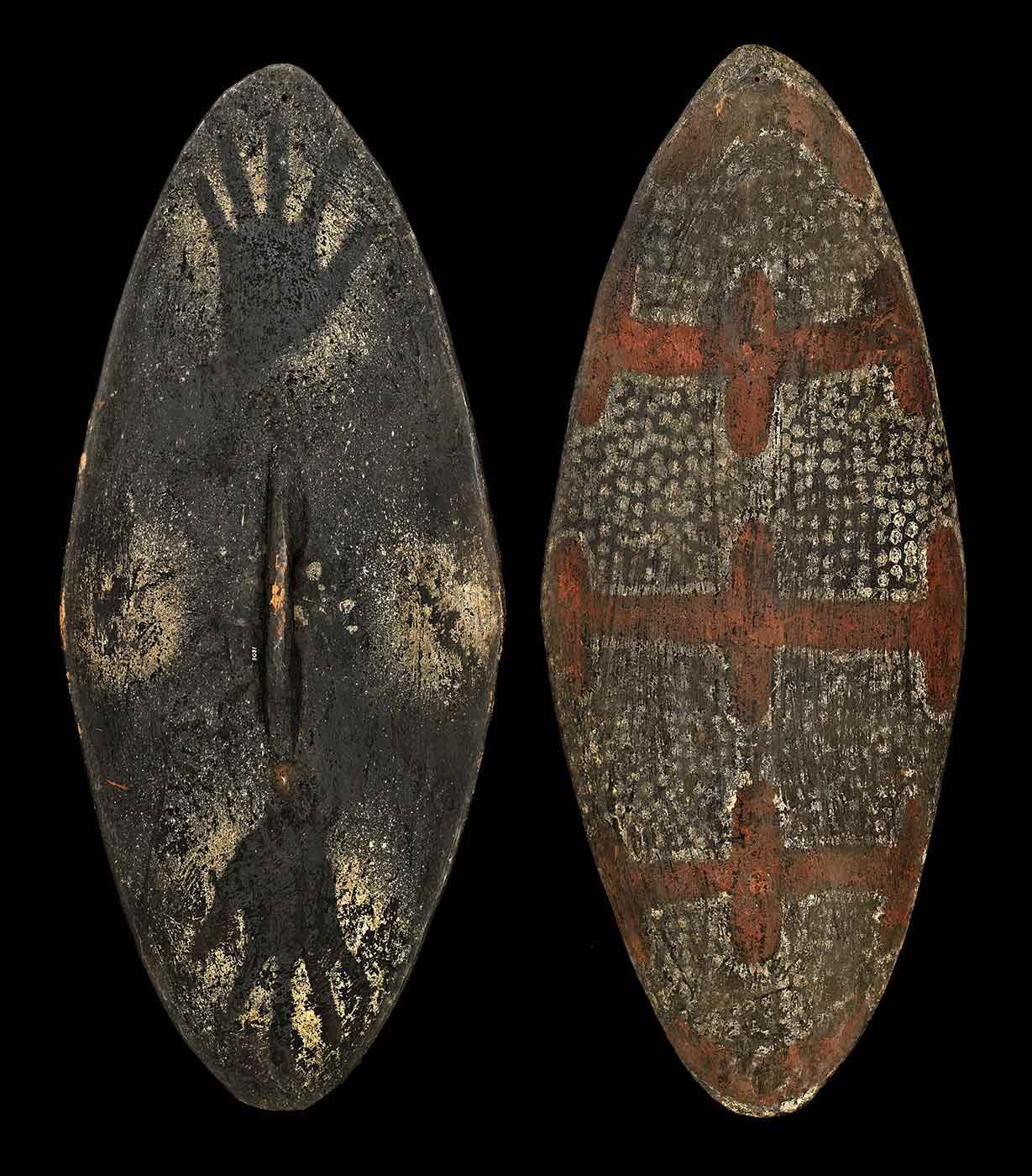 Shield (front and back)

The way a lot of our people done the hand stencils … it’s like looking up at the stars.

This hand-stencilled shield is one of a pair shown at the 1862 International Exhibition in London. It was collected by Henry Moss, who displayed Aboriginal objects from the Shoalhaven at exhibitions in Australia and overseas. They were later acquired by the British Museum.

Shields were used in warfare with neighbouring tribes, as well as for food gathering and digging, and storing and carrying coals to their camp sites.

I think it’s good for us coastal people to talk about ... this particular artefact. They were a very important part of our lifestyle, the shield … used predominately in warfare … often to fight for women ... women from other tribes, ’cos you couldn’t colour that bloodline.

Noel Wellington, a contemporary Jerrinja artist, continues the tradition of carved markings. He created this pole to depict the main foods that Jerrinja people have always relied upon, and the continued significance of the Shoalhaven River and its riches.

I’m expressing my identity … we’re South Coast people, and I feel like we’re salt water, our ancestors ... Up until now, we’ve basically lived off sea life ... Listening to me grandfather, he was telling them how his father made a canoe. Well, I’m going to do that on a log, with fish around it. That sort of stuff — it comes from our old people. I try to reflect all that within me art.

Learn about marking the landscape

Activity: Have a class discussion about the ways people have marked the landscape where you live.

What do you know about the Shoalhaven?

What symbols would you use to represent yourself? Create an artwork that incorporates some of these symbols. Make sure you also include a place in your artwork that is significant to you — it could be your school, your home or a place you have visited.

The Shoalhaven shield, pictured above, was displayed at an international exhibition in London in 1862. Learn more about this exhibition by looking at the images on the Science and Society website. You can even see the entire exhibition catalogue on the Grace's Guide to British Industrial History website.

Every day now develops new wonders and rarities arrived or expected for this great display. Goods of every kind and from every country are now pouring in from morning till night … All parts of Australia will, of course, send fine collections.

Imagine you were a person living in London at this time. Write a letter to a friend describing your visit to the exhibition and what you thought when you saw the shield.