Swimming and the beach 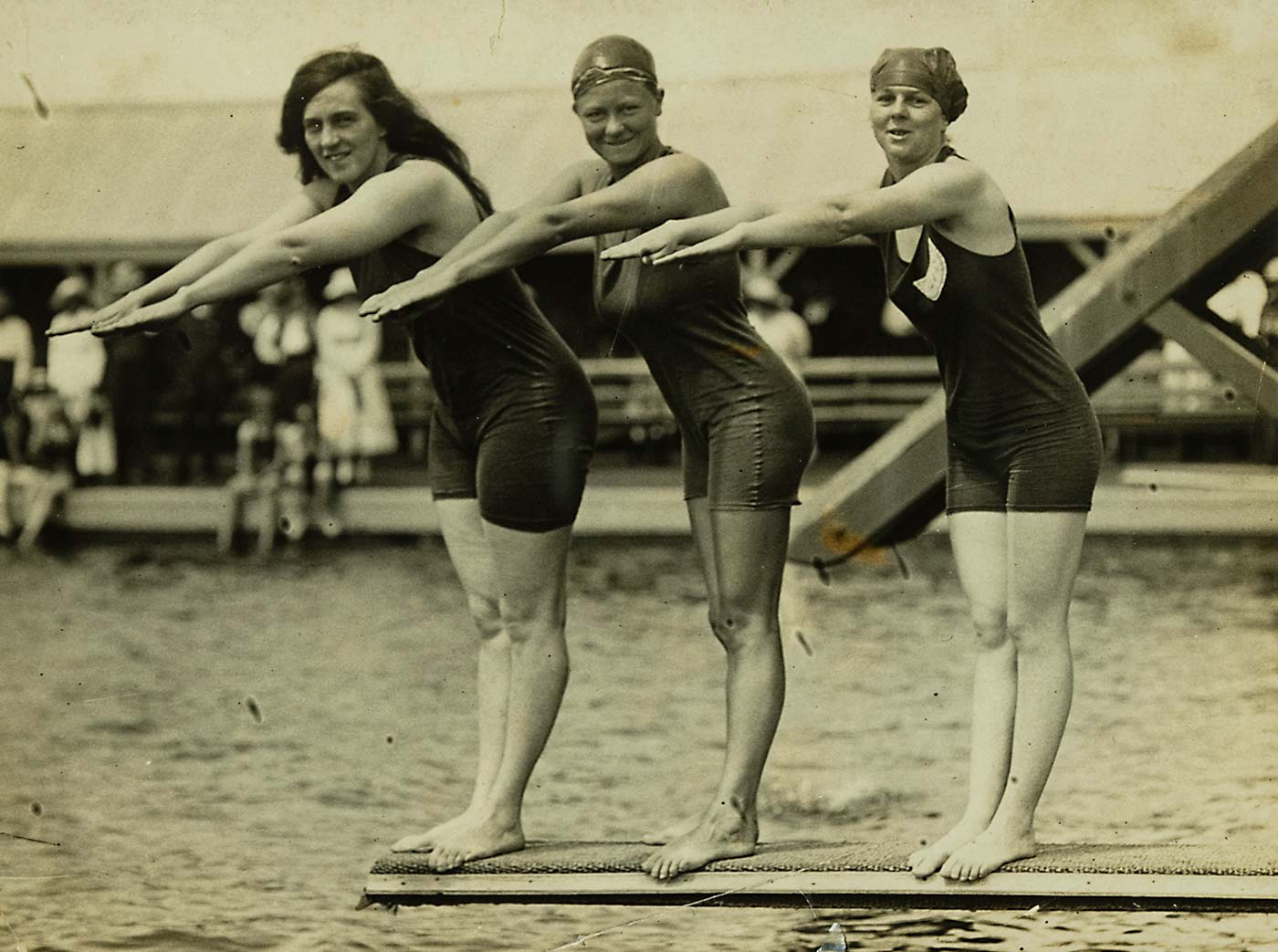 The two greatest swimming women in the world are now undoubtedly the Australians, Fanny Durack and Annette Kellerman. Fanny has proved herself at Stockholm to be the Naiad of All Nations. She is no beauty like Annette, but she can swim like a duck; the Kellerman’s style is more like a swan’s.

Arms outstretched, muscles flexed and costumes clinging to their curves, these women face the camera with confidence. They are the medal winners from the 100-metres women’s freestyle event at the Stockholm Olympic Games in 1912: Australians Sarah ‘Fanny’ Durack and Wilhelmina ‘Mina’ Wylie, and England’s Jennie Fletcher. This photograph conveys the athleticism and determination of these women, and hints at broader histories.

Durack and Wylie were Australia’s champion women swimmers. In the early years of the 20th century, competitive swimming was becoming increasingly popular with spectators and competitors, male and female, and swimming was encouraged as a graceful, healthy recreation.

Women soon became involved in competitive speed swimming. Wylie’s father, Henry, himself a long distance and underwater swimming champion, established Wylie’s Baths at Coogee in 1907. As a child, Wylie competed in carnivals and gave exhibitions of ‘fancy diving’. Durack learned to swim at Coogee and, by 1912, had broken world records. The Sydney sports newspaper, the Referee, described the swimmers as ‘veritable water nymphs, absolute amphibians’.

Undeniably talented, the two women had to contend with prejudice from male and female swimming organisations. The New South Wales Ladies Amateur Swimming Association banned female swimmers from competing in front of men, but, in March 1912, the Sydney Ladies Swimming Club voted that Durack and Wylie should represent Australia in Stockholm.

Despite being granted permission to compete, Durack and Wylie had to raise funds privately to pay for their travel. Stockholm was the first Olympic Games to include women’s swimming. On Friday 12 July 1912 they swam in the 100-metres freestyle final, in a pool without lanes. Durack collided with the side of the pool, but still won the race. Wylie won the silver medal, and Fletcher, bronze.

Durack and Wylie were Australia’s first Olympic sporting heroines and, without their medals, there would have been little for Australia to crow about at the 1912 games. Wylie later recalled, ‘When the Australian flag went up for 1 and 2 in Stockholm, of course Australia sort of took the credit’. The press hailed their wins as ‘An Australian Victory’.

The photograph suggests other struggles. The swimmers stand before the camera and spectators scantily clad yet unabashed. For several years, swimmer and vaudeville performer Annette Kellerman had been championing rational swimwear for women. But wet woollen costumes were see-through and mixed bathing remained the subject of debate in Australia. On returning from Stockholm, Durack spoke against public attitudes to mixed bathing, meeting a tepid reception.

Durack’s and Wylie’s achievements in 1912 marked the beginning of a new phase for Australian sportswomen in general, and Australian women swimmers in particular. TheWorker asked, in August 1913, ‘There are champions of all sorts in sport and skilled performance; why not more championesses, such as Annette Kellerman and Fanny Durack in swimming?’

Women’s swimming was breaking ground and establishing a place for the female competitive spirit, but not without tensions and the renegotiation of social boundaries.