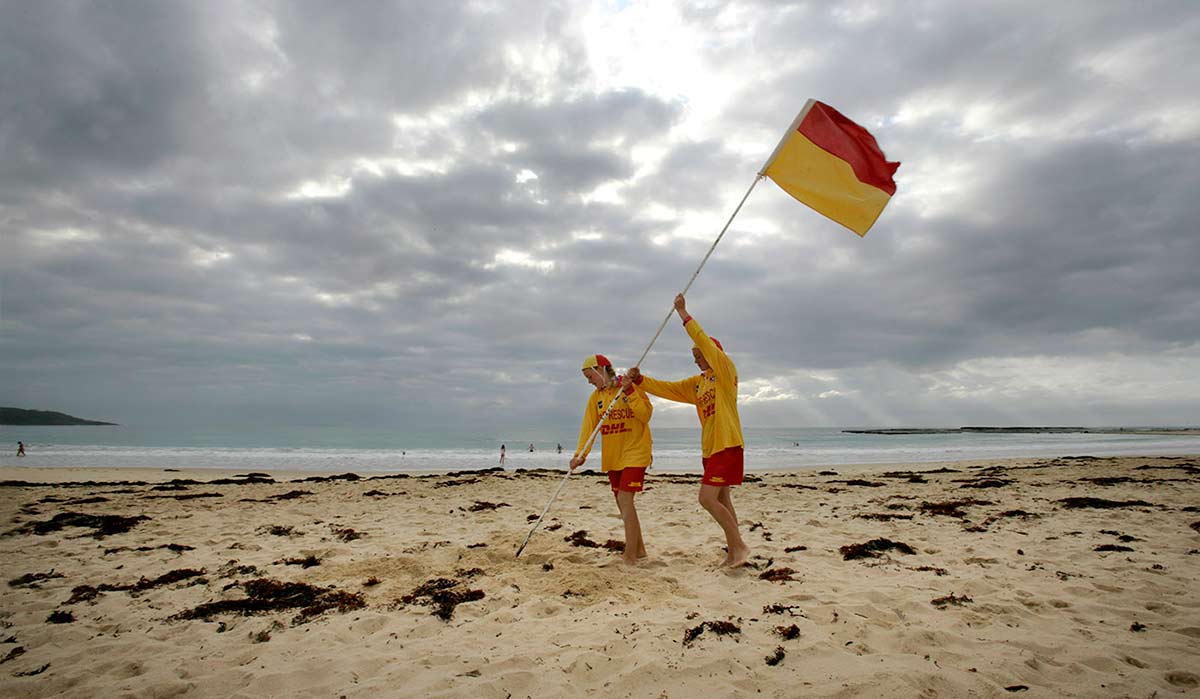 The first surf lifesaving club was founded at Bondi in February 1907 and several others were established soon after.

On 18 October 1907, these clubs formed the Surf Bathing Association of New South Wales to regulate surf bathing and raise funds.

Surf lifesaving clubs soon spread around the country and the surf lifesavers themselves became an Australian icon.

The lifesavers represent the very highest class. They are the Samurais, the oligarchs, the elite. They strut the beaches with superiority that is insolent, yet at the same time, tolerant ... of lesser breeds – a gladiator class, envied by all the men, adored by all the women.

The Australian coastline stretches more than 36,000 kilometres. Aboriginal people used the beach as a source of food and enjoyment but the first British settlers were less enthusiastic. They saw the ocean as a reminder of the long and dangerous voyage that separated them from home.

However, as cities grew, and became more congested and polluted, doctors prescribed sea air and salt water for good health. Seaside resorts appeared around the country and, by the early 20th century, Australians had discovered the joys of the beach. 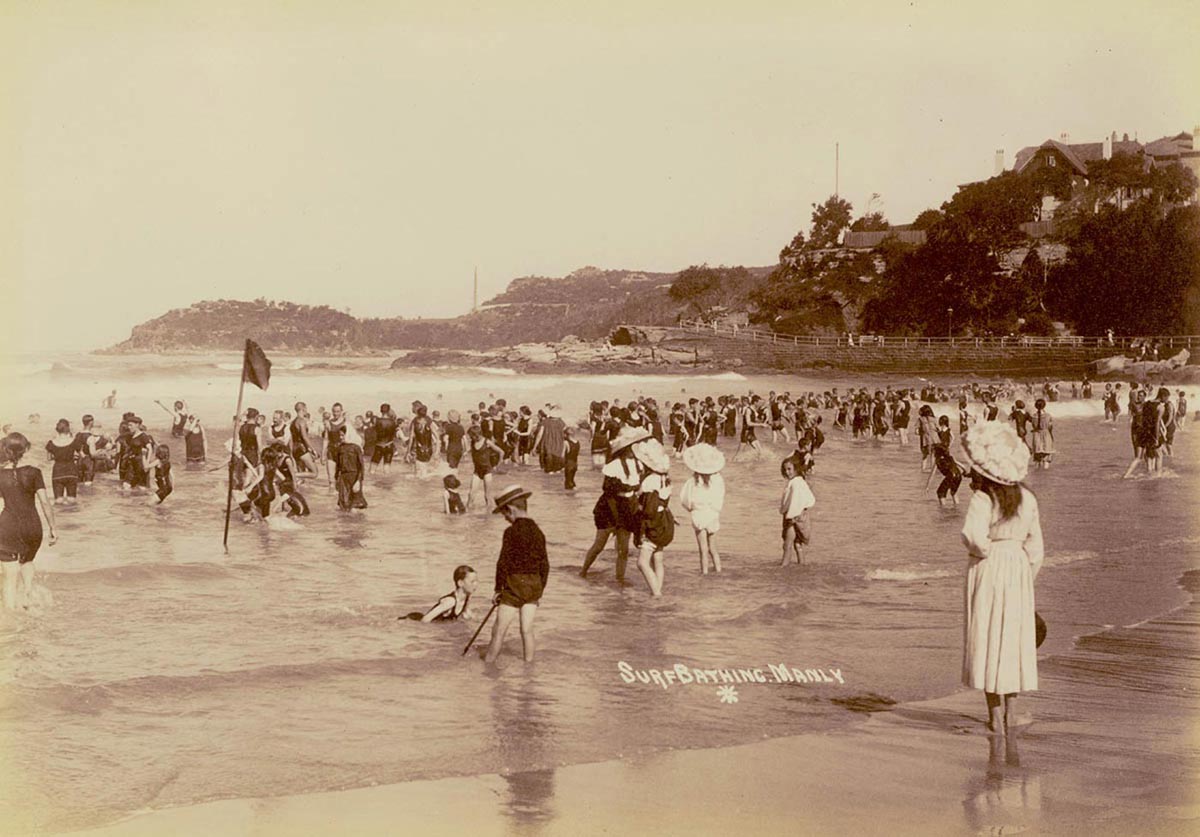 There was little need for surf lifesaving clubs during the 19th century as it was illegal to swim in the surf during daylight hours. It was seen as immoral, and men and women could only 'bathe' in the early morning and late evening, and never at the same time.

In 1902 the artist William Gocher advertised that he would swim at Sydney’s Manly Beach at noon in protest against the law. Gocher was arrested but not charged. Similar protests occurred at other beaches but police were reluctant to arrest the bathers as long as they were decently clothed. The laws were repealed within the next three years.

Improved public transport made beaches more accessible while reduced working hours meant people had more leisure time. Anyone with the fare could spend the day at St Kilda, Bondi, Redcliffe, Glenelg, or Cottesloe. A day at the beach became a popular activity.

However, as the number of beachgoers entering the surf increased, so did the number of drownings and attempted rescues. This was largely due to the fact that many bathers simply couldn’t swim.

The Royal Life Saving Society, which originated in Britain, placed lifelines on beaches and held lifesaving classes that covered resuscitation and rescue techniques. Manly Council was among the first to protect surf bathers, employing two fishermen, the Sly brothers, to patrol offshore and, in 1905, a lifeguard, Edward ‘Happy’ Eyre.

Mostly, surf bathers had to look after themselves, though some organised informal training sessions to improve their lifesaving skills. Local businessmen and councillors, often surf bathers themselves, saw the economic benefits of providing safe beaches.

The first surf lifesaving club was founded at Bondi in February 1907 and several others followed soon after. On 18 October 1907, representatives from Sydney surf lifesaving clubs, together with members of other interested groups, met to form the Surf Bathing Association of New South Wales.

The purpose of the organisation, now known as Surf Life Saving Australia, was to regulate and promote surf bathing and raise funds from local councils and the NSW government.

Surf lifesaving spread around the country, beginning with Western Australia and Queensland. 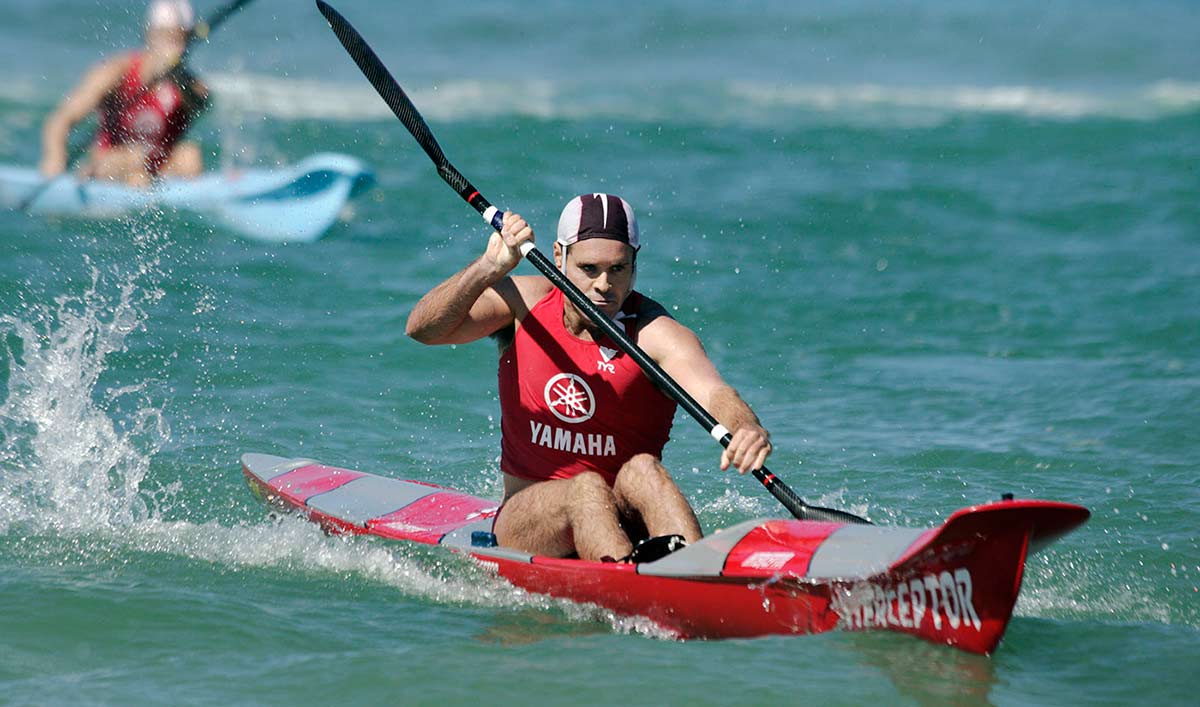 The clubs proved their value on ‘Black Sunday’ – 6 February 1938 – when a series of freak waves hit Bondi Beach and hundreds of people were swept out to sea.

Fortunately, a surf club race was about to start and there were plenty of lifesavers on the beach. However, many of the lifesavers had to be saved themselves, as desperate swimmers grabbed onto rescue lines and dragged them underwater. Five people drowned that day, but between 200 and 300 people were rescued.

Surf lifesaving consists of two main activities – saving lives and holding competitions. Since the 1920s Surf Life Saving Australia has emphasised the humanitarian aspect of its work but many lifesavers also join for the social and sporting benefits.

Soon after surf lifesaving clubs were established, they held carnivals in which lifesavers would test their skills. Surf carnivals also reassured the public of the lifesavers' discipline and competence.

Tens of thousands of people attended carnivals in the 1920s and 1930s, and they have been staged to commemorate royal visits, the 1938 Sesquicentenary and the opening of the Sydney Harbour Bridge.

Early carnivals included novelty events such as pillow fights, chariot races and a tug of war but these were phased out due to concerns they would undermine the serious nature of surf lifesaving.

The sport of surf lifesaving combines tradition with modern sporting practice. The surfboat race, belt race, rescue and resuscitation, and the march-past are still contested. Although no longer part of current practice, they honour the traditions of surf lifesaving.

The inclusion of individual events and the acceptance of professional athletes reflect broader cultural changes.

Hayden Kenny won the first Australian Ironman title at Coolangatta in 1966. Adapted from an American event, the Ironman includes a surf ski leg, board paddle and swim, along with beach sprints. In the 1980s the Ironman event provided a much-needed boost to surf lifesaving, attracting corporate, media and public interest.

A 42-kilometre ironman event staged for the filming of The Coolangatta Gold movie in 1984 attracted more than 100,000 spectators. Guy Leech won the actual event while the reigning Australian Ironman champion, Grant Kenny, starred in the film.

The Ironwoman event was introduced in 1992 and women also compete in the recently revived Coolangatta Gold event.

In the 1920s the surf lifesaver replaced the bushman and the digger as the idealised Australian.

Like his predecessors, the surf lifesaver was masculine, tanned, fit, strong and selfless. He was bound by mateship and subjected to, but not tamed by, military-style discipline. He was also modern and urban, a reflection of the nation, or the nation as it wanted to be.

Surf lifesavers have featured in advertisements for a range of products. They have promoted tourism and migration and have become as identifiably Australian as kangaroos and the Sydney Harbour Bridge.

Today anyone over the age of 15 can qualify as a surf lifesaver. To do so, you must pass a series of tests including a first aid exam and a simulated rescue. You must also complete a 200-metre run, a 200-metre swim, then another 200-metre run in less than eight minutes.

Volunteer surf lifesavers patrol the beach on weekends and public holidays. Lifeguards are employed by local councils to patrol the busier beaches.

Over the past century, advances in medicine and technology have changed the way lives are saved. The buoy and box line were replaced by the surf-reel and line, which in turn were replaced by the rescue board and tube. Surfboats have been overtaken by jet skis and inflatable rescue boats. Helicopters search for swimmers from the air.

Once a five-man crew was required to perform a rescue with the reel, line and belt. Now one surf lifesaver with a rescue board can do the job.

According to Surf Life Saving Australia, the organisation rescues more than 12,000 people a year.