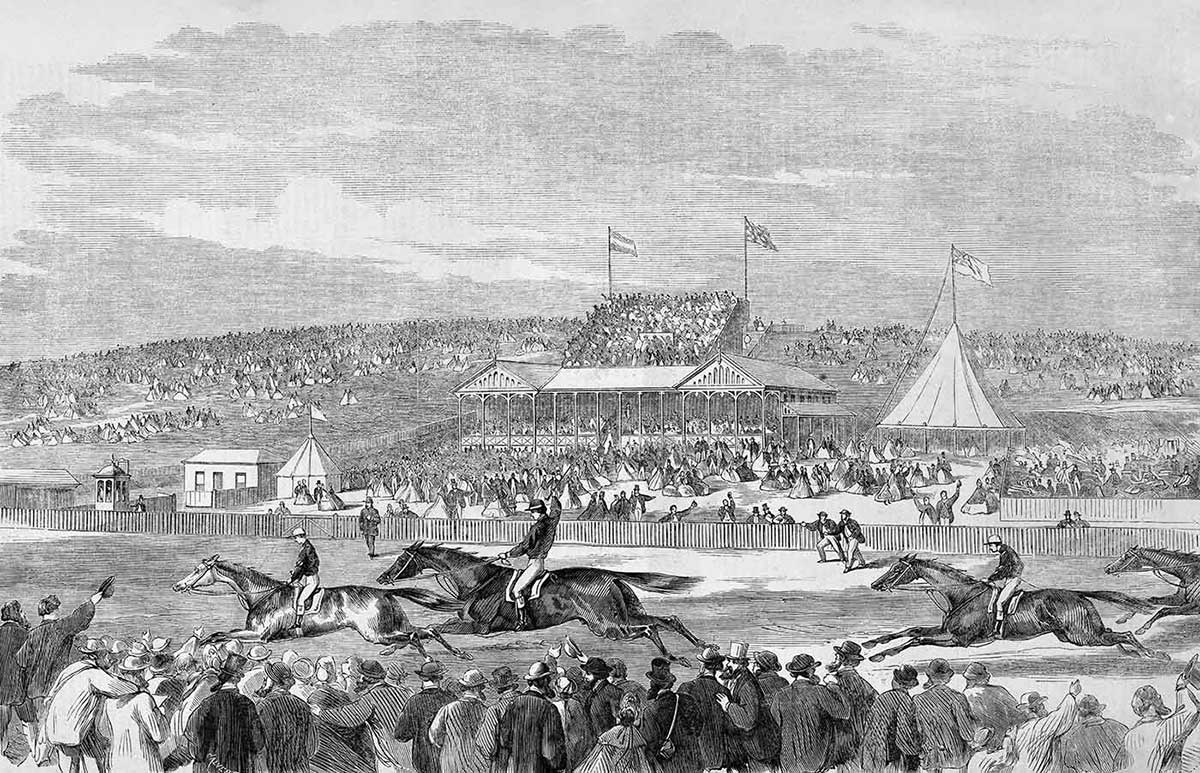 On 7 November 1861 about 4000 people gathered at Flemington Racecourse in Melbourne to watch a horserace that would become one of Australia’s most important sporting events.

Fifty-seven horses were slated to take part in the race, though only 17 actually started. Sydney horse, Archer, trained by Etienne de Mestre, was the winner by a staggering six lengths.

Today, the Melbourne Cup is known as ‘the race that stops a nation’, drawing crowds of thousands on the first Tuesday in November every year.

Nowhere in the world have I encountered a festival of people that has such a magnificent appeal to the whole nation. The Cup astonishes me.

Origins of the Cup

Horseracing has been an important and widespread part of Australian sporting culture since soon after European settlement of the continent.

By the mid-19th century, various racing clubs had been set up and rules were being laid down to organise the industry.

The first studbook for New South Wales was produced in 1859, demonstrating the interest in thoroughbred breeding.

Horsemanship and horses were worked into 19th-century Australian culture as a key aspect of national identity. Authors such as Adam Lindsay Gordon and Banjo Paterson incorporated horses into their writing, celebrating the relationship between horse and rider.

It was from this ’horse culture’, and the rapid growth in Victoria’s population and wealth, that the Melbourne Cup developed.

The Melbourne Cup is one of the world’s few major handicap horseraces. A handicap race is one in which each horse is allocated a different weight depending on its age and previous form. This presents punters with the challenge of guessing which horse will overcome its handicap.

The Turf Club hoped that this greater level of speculation would attract more entries to the Melbourne Cup, and therefore higher prize money. In this they were successful. The two competing organisations merged in 1864 to form the Victoria Racing Club, which has controlled racing in Victoria, including the Melbourne Cup, ever since.

The first Melbourne Cup was held on Thursday 7 November, as the practice of running the event on the first Tuesday of November wasn’t introduced until 1875.

While the recent news of Burke and Wills’ death had put Melbourne in a sombre mood, fine weather and the novelty of a handicap race drew a decent crowd to Flemington. As continues to be the case, people from all walks of life ventured to the track to try their luck.

'[T]he Grand Stand was tolerably well filled, and with a more than usual attendance of ladies; whilst on 'the Hill' (the price of admission having been reduced to 1 shilling for each day) the public crowded in large numbers' – The Age (Melbourne), 8 November 1861

Fifty-seven horses were initially listed for the first Melbourne Cup, but for a variety of reasons only 17 started. The favourite was a local horse, Morman. The pace was slow, as in some places the grass was still three feet high, and a serious fall involving a number of horses marred the occasion.

Furthermore, it was not to be the favourite’s day. Archer, from Sydney and trained by Etienne de Mestre, streaked to the lead in the last straight winning by six lengths. His time of 3 minutes 52 seconds remains the slowest on record.

Despite the drama and the winner being from interstate, the first Melbourne Cup proved a success.

The uncertainty of the handicap, along with the prestige of the race, continues to foster higher stakes, ‘rags to riches’ stories and adulation for a favourite when it wins.

The National Museum of Australia holds some important objects related to the Cup including Phar Lap’s heart, the 1866 and 1867 trophies, and Peter Pan’s 1934 Melbourne Cup.

'Phar Lap: From racecourse to reliquary', in the Museum's reCollections journal, vol. 8, no. 1