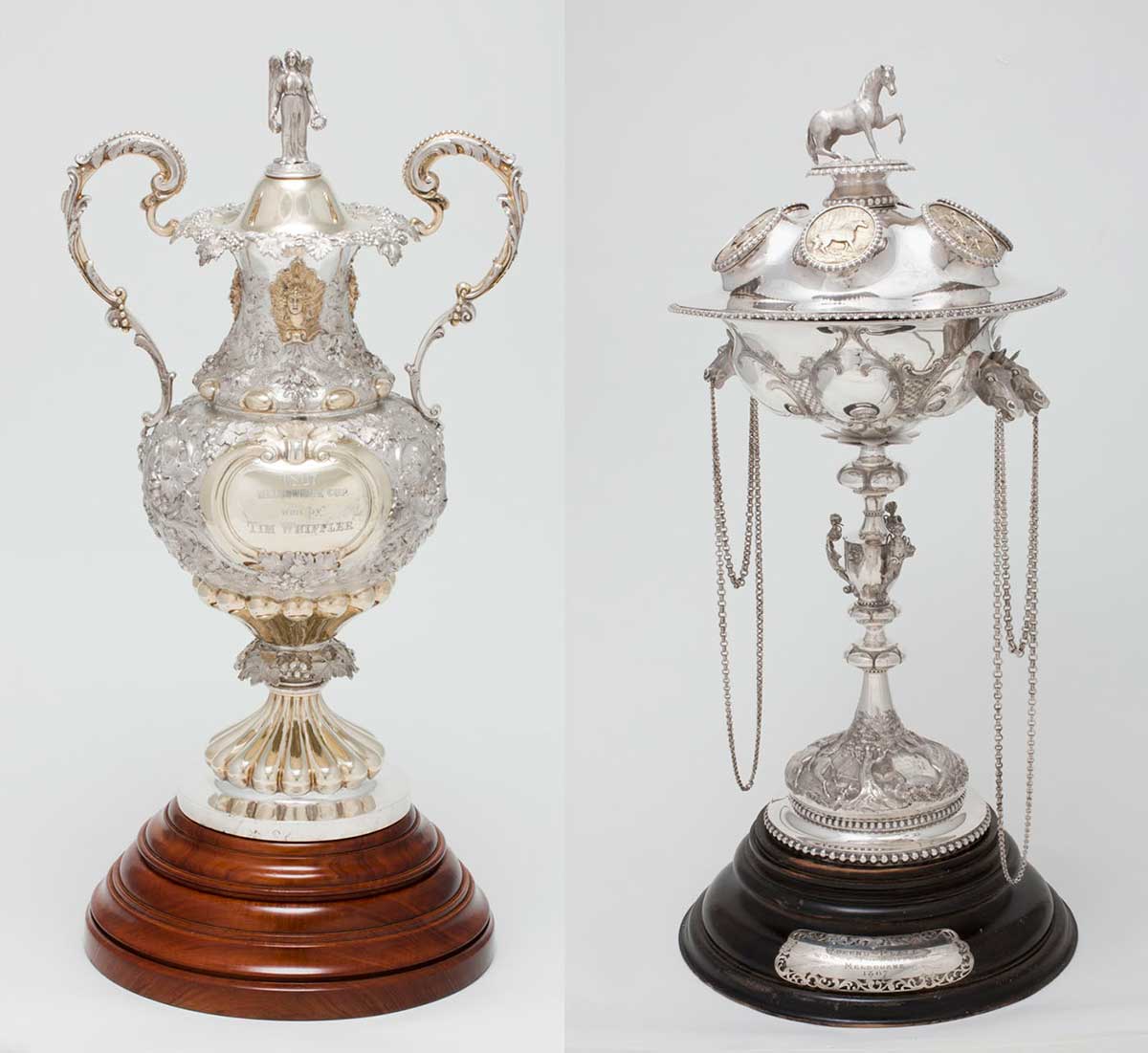 The 1867 Melbourne Cup featured two horses by the name of Tim Whiffler, the 5 to 2 favourite and eventual winner from New South Wales, and a local horse owned by Mr Walter Craig, a well-known Ballarat hotelier.

To avoid confusion, the bookmakers referred to them as 'Sydney Tim' and 'Melbourne Tim'. Tim Whiffler was a common name for racehorses in the late 1800s.

Not only were two Tim Whifflers competing in the 1867 Melbourne Cup, but one of the sons of 'Sydney Tim' was also named Tim Whiffler, as was an English thoroughbred imported for breeding.

'English Tim Whiffler', as he was known in Australia, was a very successful stallion, siring two Melbourne Cup winners (Briseis and Darriwell) and making a significant contribution to Australian bloodstock especially through his daughters. 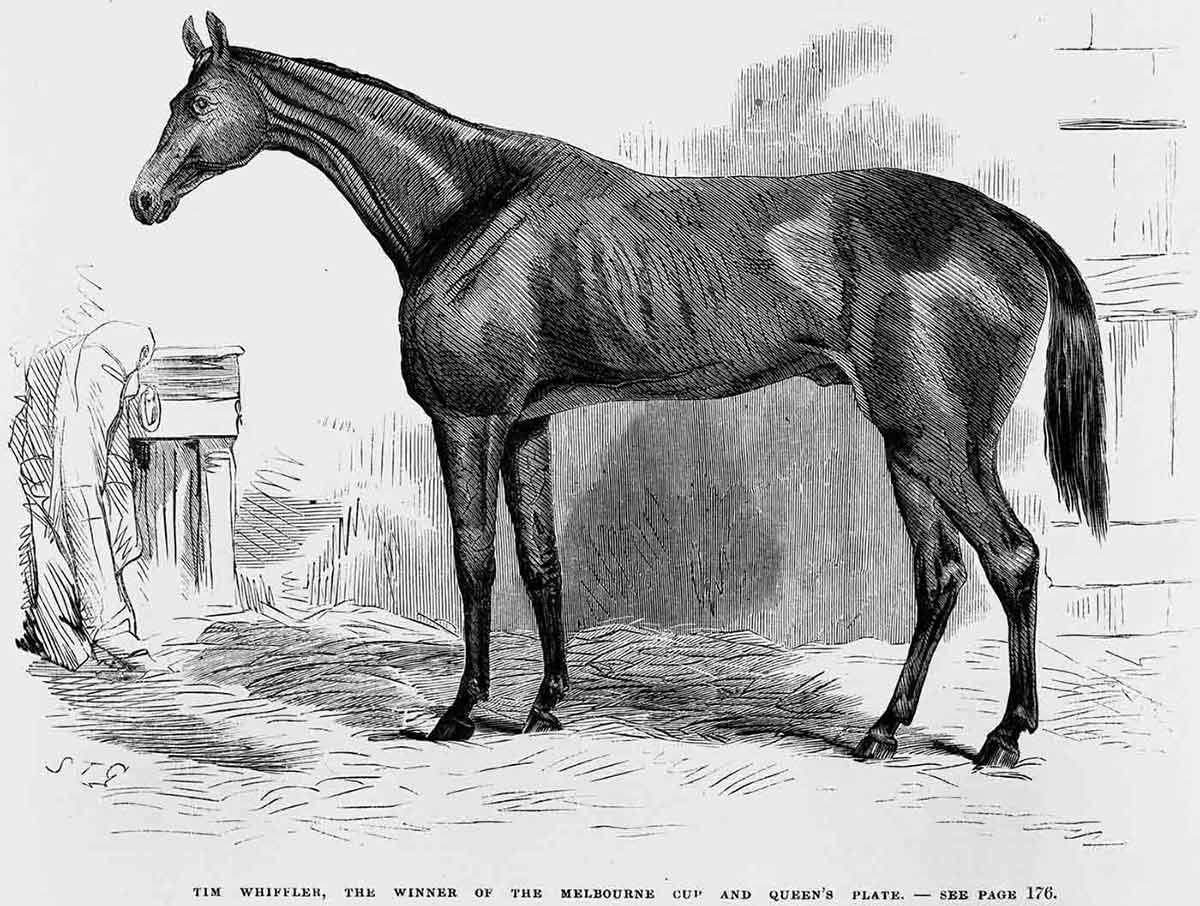 The 1867 Melbourne Cup winning horse, Tim Whiffler, was trained by Etienne de Mestre. He was born and went to school in Sydney before settling with his merchant father and his family in the Shoalhaven region of New South Wales. A good friend of horse breeder Thomas John Roberts, de Mestre developed into one of the greatest trainers of his generation.

He won the first two Melbourne Cups in 1861 and 1862 with Archer, the 1867 Cup with Tim Whiffler, the 1877 Cup with Chester and, finally, the 1878 Cup with Calamia. With five Melbourne Cup wins as a trainer, de Mestre held the record as the most successful trainer of the race for almost 100 years.

He was overtaken in 1977 when Bart Cummings won the sixth of his eventual twelve Melbourne Cups. In 2002 de Mestre was inducted into the Australian Racing Hall of Fame.

With Etienne de Mestre winning five Melbourne Cups in the early years of the race and John Tait, also a New South Welshmen, winning four in the same period, practically half of the Melbourne Cup winners of the first two decades of the race's history came from interstate. Perhaps this was one of the reasons the Melbourne Cup so quickly became a passion for all Australians, rather than just Melburnians.

Today the race remains the best known of all Australian races, and has become an international affair, with foreign entrants and winners increasingly common each year.

The trophy for the Melbourne Cup today is a 'loving cup' with three gold handles. This basic design has been the same for the past 90 years.

Before the trophy became standardised in 1919, however, a range of different trophies were awarded for the Melbourne Cup, and in some years no trophy at all.

For the first three years the Melbourne Cup was a 'Cup' in name only, with no trophy awarded to the winner.

Instead, the winner of the first race in 1861 received a gold watch, and for the next two years a cash purse was the major prize. In 1865 and 1866 English-made trophies were awarded. These now reside in private collections.

The Melbourne Cup presented in 1867 was made in England by Thomas Smily of London firm WR Smily & Company.

Victorian jewellers complained to the Victorian Racing Club (VRC) that the trophy should have been made locally; believing the work of Melburnian William Edwards to be superior in both design and workmanship to the English made trophy.

However, the VRC presented a William Edwards-designed cup that he hoped would be the Melbourne Cup trophy, to the winner of the 1867 Queen's Plate, which was run at Flemington two days after the Melbourne Cup and won by Tim Whiffler.

Both the English-made and locally made trophies, won by Tom Whiffler in 1867, have remained in the same collection for the best part of a century and a half, and are now part of the Museum's collection.

1867 Queen's Plate trophy won by (Sydney) Tim WhifflerSilver trophy decorated with chains, lions, scenes of races and a lid on which a horse figure stands. The base has the inscription 'QUEENS PLATE / WON BY "TIM WHIFFLER" / MELBOURNE / 1867'. The circular silver cup features two horse's heads together on the left and right of the cup, equalling four horses heads. The inside of th...

Where does the Melbourne Cup belong in Australian culture – and why has it endured?

Louise Douglas talks about Phar Lap’s heart and many other objects associated with the Melbourne Cup in the Museum’s National Historical Collection.
Open player in a new tab
Presenters: Carol Cooper and Louise Douglas
Tags:
00:00 / 8:56