The horse Phar Lap is a legend of Australian sporting history. His sensational rise from humble beginnings captured the public's imagination during the difficult years of the 1930s Depression.

Phar Lap won 37 races from 51 starts, including the 1930 Melbourne Cup. His death in 1932 prompted an outpouring of anger and grief. 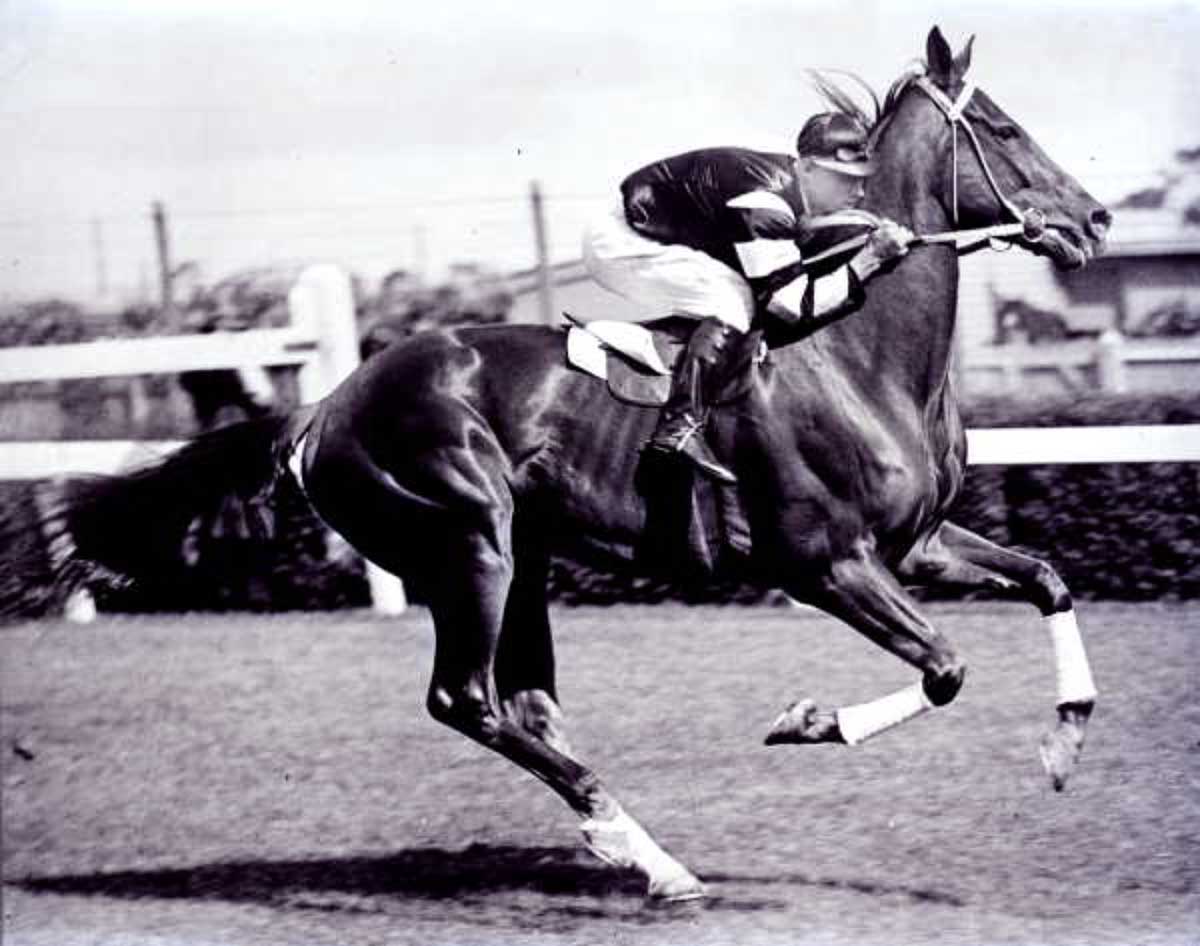 Heart as big as Phar Lap's

Phar Lap's heart is one of the icons of the National Museum's collection. It weighs 6.35 kgs. This is more than 1.5 times the weight of an average thoroughbred racehorse heart, which weighs 3–4 kgs.

Phar Lap's heart was returned to Australia for testing after his sudden death in the United States in 1932. It was found to be of an unusually large size, and was donated to the Australian Institute of Anatomy, where it was on show for many years.

The saying 'a heart as big as Phar Lap's' alludes to the horse's strength and staying power, as well as the weight of his heart. It is used to indicate great courage, generosity or power.

Phar Lap's heart is on show in the Landmarks gallery and is consistently the object visitors most request to see at the Museum.

Phar Lap's popularity was not just due to the fact he won, but due to his humble origins. In the blighted years of the Depression, Phar Lap's spectacular rise from humble beginnings spoke strongly to the hopes and dreams of ordinary Australians. He had neither looks nor obvious racing potential and was leased cheaply by a relatively unknown trainer, Harry Telford.

Phar Lap was born in Timaru, New Zealand, on 4 October 1926, a rich red chestnut gelding who stood 17 hands high. The yearling was one of six sent by Seadown Stud owner Alec Roberts, to the thoroughbred sale at Trentham, New Zealand, in 1928.

Sydney-based Australian trainer Harry Telford received a copy of the catalogue for the sale, and was impressed by the colt’s breeding. Telford did not have money to finance the purchase and approached American businessman David J Davis.

Davis was initially reluctant to commit to the unseen horse, but eventually Telford’s brother inspected the horse and Davis contacted Jack Sullings, a business associate in New Zealand, to bid for him.

The auctioneer’s copy of the New Zealand Thoroughbred Yearling Sale Catalogue for 24 January 1928, bought by the Museum on the eve of the 2015 Melbourne Cup, includes handwritten notes that show ‘Davis of Sydney’ was the buyer, with the direction ‘Telford to take delivery’ and the price of £160.

Phar Lap often won by several lengths and finished at half pace. He was the only horse in Australian racing history to have been favourite for the Melbourne Cup three years running.

In 1931 Telford and David became co-owners of Phar Lap. Davis suggested sending the horse to America to contest the 1932 Agua Caliente handicap in Tijuana, Mexico, the richest race in the world at the time.

Tommy Woodcock, the devoted strapper who had seen the horse through all of his races, was heartbroken.

In Australia, Phar Lap's death was seen as a great tragedy, and rumours spread that the horse may have been poisoned.

Davis arranged for Phar Lap's heart to be sent to the University of Sydney for examination by Dr Stewart McKay, an authority on thoroughbreds, and pathology expert Professor Welsh.

It was then that part of the wall of the left ventricle was removed, to inspect the muscle thickness of the heart walls. Noting the unusually large size of Phar Lap's heart, Dr McKay suggested to Telford that it be donated to the Australian Institute of Anatomy in Canberra.

Debate continues today as to whether Phar Lap died of an acute infection or from arsenic poisoning.

Phar Lap's remains were dispersed across the globe.

His mounted hide went to the Museum of Victoria in Melbourne, the skeleton to the National Museum of New Zealand in Wellington and the heart to the Australian Institute of Anatomy.

For many years Phar Lap's heart was on show in Canberra beside the much smaller heart of an army horse.

The Institute of Anatomy collection of wet biological specimens, including Phar Lap's heart, became one of the key collections of the National Museum of Australia in 1980.

Other successful racehorses have also been found to have abnormally large hearts. Research has uncovered a genetic anomaly, named 'the X-Factor', which is passed down through the female line, and originates in the daughters of a racehorse named Eclipse.

Eclipse was foaled in England in 1764, and began racing as a four-year-old. He won all 18 starts, and was retired to stud, where he sired hundreds of winners. When he died in 1789 his heart was removed for burial, and was weighed. Eclipse's heart weighed 14 lbs, or 6.35 kgs, the same as Phar Lap's.

The Museum's Phar Lap collection includes the personal photograph album of Phar Lap's owner, David Davis. The album has 36 black and white photographs, documenting each of Phar Lap's race wins in Australia, with race details inscribed on the mounts. There are 18 pages in all.

This is the only photo album known that features each of Phar Lap's Australian wins. Davis died in 1959 and this album was discovered by his descendants in the attic of the family home in California in the 1990s.