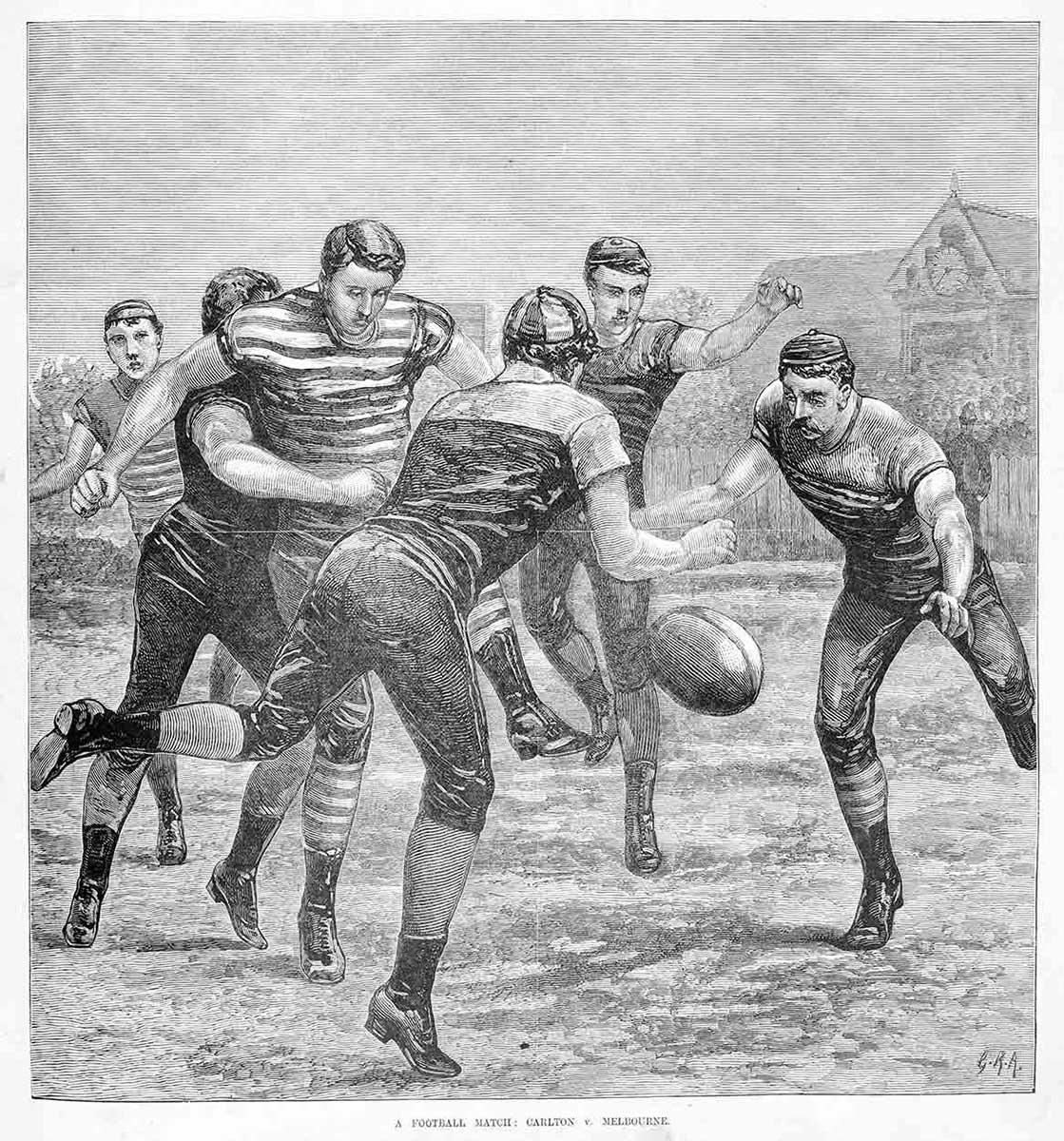 In the winter of 1858 students from Scotch College and Melbourne Grammar competed against each other in several games of football. These matches are credited as the first organised games of Australian Rules football.

The following year a set of rules was drawn up and regular games became a feature in the parks around Melbourne. By the 1870s crowds of 10,000 people were attending games at the Melbourne Cricket Ground to watch this uniquely Australian game.

Now that cricket has been put aside for some few months to come, and cricketers have assumed some-what of the chrysalis nature (for a time only 'tis true), but at length will again burst forth in all their varied hues, rather than allow this state of torpor to creep over them, and stifle their new supple limbs, why can they not, I say, form a foot-ball club, and form a committee of three or more to draw up a code of laws.

Australian Rules football evolved in Melbourne in the mid-19th century. Both Gaelic football and an Aboriginal game (commonly referred to as ‘marngrook’) have been cited as inspiration, but the game really emerged from the football played in English public (that is, private) schools. Transported to the parklands of Melbourne, the game was shaped by the vast open spaces and the men who played it.

In England, the rules of football differed from one school to the next and when playing outside of their school, teams had to agree on which rules to follow. At Cambridge University in 1848, a common set of rules was established that drew from five schools – Harrow, Eton, Rugby, Winchester and Shrewsbury.

In colonial Melbourne, the same issues arose. Football games were chaotic and often lengthy negotiations over rules were required before play could begin. It became apparent that some formal rules were necessary. 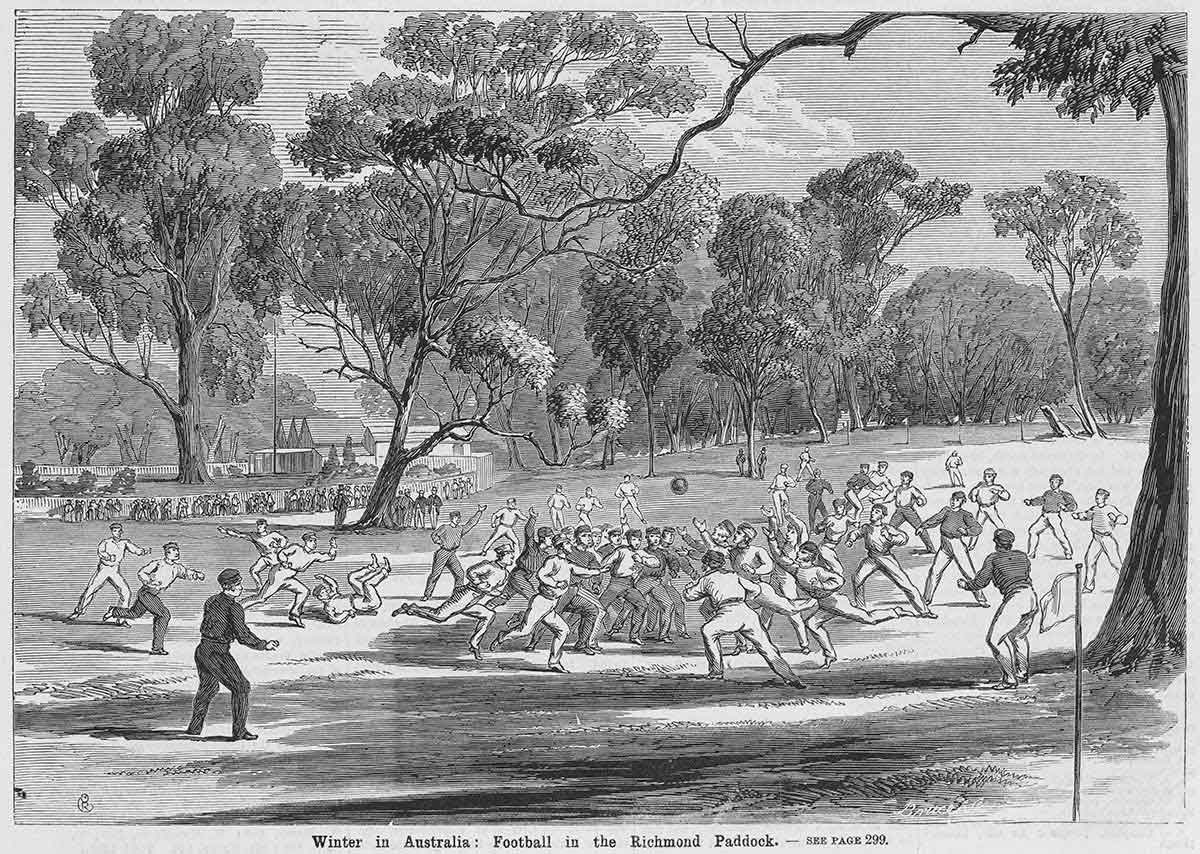 Winter in Australia: Football in the Richmond Paddock

In May 1859, Thomas Wentworth Wills, a renowned cricketer and the greatest proponent of the new game, was one of seven members of the Melbourne Cricket Club who established a set of rules.

Several of the group had studied at Cambridge so they likely had experience of playing a hybrid form of football. They were willing to compromise and, as a result, the game that emerged was not bound by tradition. In many ways, the new sport reflected the aspirations of colonial Melbourne where class mattered less than skill, pluck and endeavour.

In the following decade, several amendments were made so that:

There are no more popular out-door gatherings in winter time than those which take place on Saturday afternoons in Richmond-paddock to witness the football strife … These contests attract an attendance which includes all classes, and sometimes numbers as many as 10,000 persons.

By the 1870s football was well established in Melbourne. Clubs formed around suburbs, hotels, churches, schools and workplaces, and in a society of recently-arrived immigrants, provided a sense of belonging and community.

Games began to be played regularly and an unofficial system of senior and junior clubs emerged. The starting time for senior games was soon fixed at 3pm on a Saturday afternoon, enabling some manual labourers to play.

Players and spectators represented the full gamut of Melbourne society. The games were still played on open parkland, there were no admission fees and crowds of 2000 to 3000 spectators regularly gathered to watch. Women too were regular attendees, parading in their finery around the playing area.

However, the rising popularity of the game was making it increasingly chaotic. Enthusiastic spectators encroached onto the field and disrupted the game, sometimes intentionally.

Cricket clubs had refused regular requests to allow footballers onto their grounds on the basis that the unruly players and spectators would ruin the turf. Unfortunately, those first games at the MCG did nothing to convince them otherwise. Football was again banished to the parks.

In Carlton in 1876 the football club fenced off a new ground and smoothed it out. An admission fee was introduced to cover costs and, although it was largely resented by spectators, 5000 paid to watch Carlton play Melbourne.

It became clear to cricket clubs that money could be made this way. Around the city, and particularly in country towns, football moved onto cricket grounds and the game evolved from being played on a roughly rectangular field, to being played on an oval.

The Victorian Football Association (VFA) formed in May 1877 comprising delegates from all levels of the game – senior, junior and country clubs. Its brief was to supervise all matters relating to football including revising the rules, resolving disputes, and providing umpires for the bigger games. It was also responsible for the promotion of the game and the organisation of intercolonial matches.

However, the disparity between weak and powerful clubs caused conflict within the Association, especially over the distribution of gate-takings. The more successful teams drew larger crowds and felt that they were entitled to a greater share of the funds.

Clubs put much of the money raised into improving the ground and facilities for both spectators and players, but by the 1880s money was also being offered to lure players from one club to another. The VFA promoted the amateur ideal of sport, where the game is played for its own benefits rather than financial reward. Meanwhile, the clubs were moving towards professionalism.

The evolution of the game continued, with new rules introduced to speed up play and reduce the likelihood of a draw. Richmond and University joined the league in 1908, although the latter left after the 1914 season; and Footscray (now the Western Bulldogs), Hawthorn and North Melbourne joined in 1925.

From the 1880s the game that came to be known as Australian Rules football spread from Victoria, west to South Australia and Western Australia, and south to Tasmania.

Rugby union and league prevailed in New South Wales and Queensland but, a century later in 1982, financially troubled South Melbourne relocated to Sydney. The VFL's desire to build a national league began to be realised when Brisbane and West Coast were admitted to the competition in 1987.

The League further acknowledged the national expansion of Australian Rules when it changed its name to the Australian Football League (AFL) in 1990. Since then, Adelaide (1991), Fremantle (1995) and Port Adelaide (1997) have joined and foundation club Fitzroy merged with the Brisbane Bears to form the Brisbane Lions after the 1996 season.

Recent additions to the AFL are Gold Coast (2011) and Greater Western Sydney (2012), broadening the competition to an 18-team league.

Evolution, not an invention

In trying to understand the origins of the present game of Australian football we forget that it was moulded by many people and influences, decade after decade … We all still hope to find an original landmark or great founder in the belief that the game was a once-only invention or derivation rather than a long chain of inventions and adaptations that still continue.

Each year, new players, new tactics, new rules and new technologies contribute to the evolution of this distinctly Australian sport.

The AFL explained: Past and present, Australian Football League

Geoffrey Blainey, A Game of Our Own: The Origins of Australian Football, Information Australia, Melbourne, 1990.