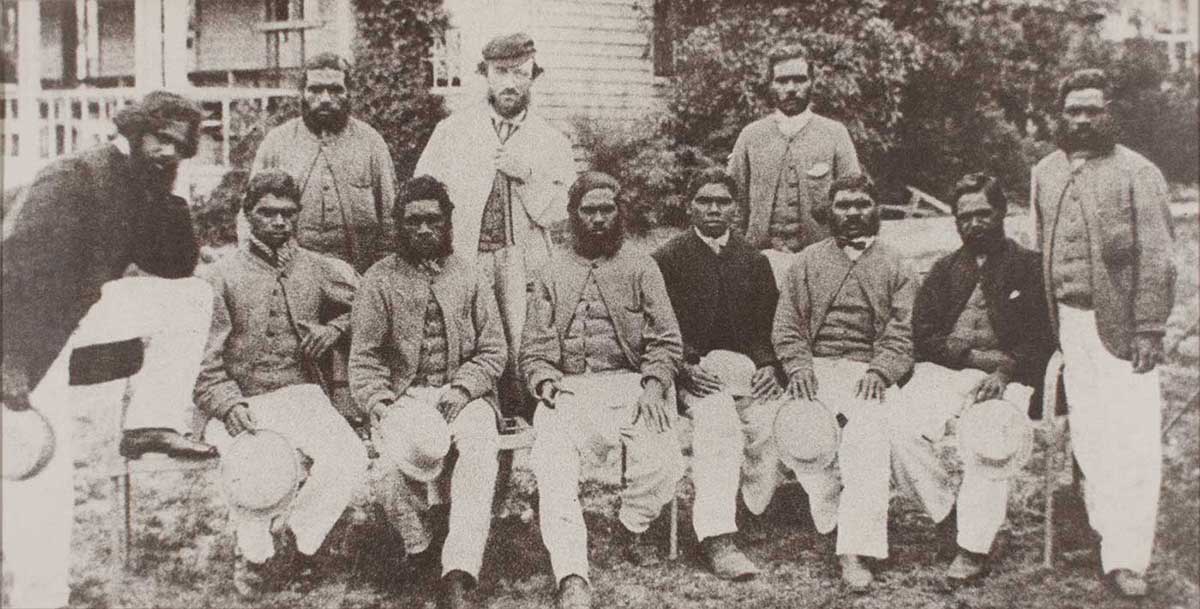 In May 1868 the first Australian cricket team arrived in England for a series of matches.

The team consisted of 13 Aboriginal men from the western district of Victoria. The Jardwadjali, Gunditjmara and Wotjobaluk men were coached and captained by an ex all-England cricketer, Charles Lawrence. The team played 47 matches against intermediate-level English amateur teams between May and October 1868.

The tour made headlines in England and Australia and continues to be a significant moment in Australia’s cricketing history, racial relations and national identity.

They are the first native Australians to have visited this country on such a novel expedition, but it must not be inferred that they are savages; on the contrary … They are perfectly civilized, having been brought up in the bush to agricultural pursuits … With respect to their prowess as cricketers – that will be conclusively determined by their first public match.

Social cricket was an important aspect of early 19th-century colonial society. During the 1850s ‘first-class’ cricket developed as a result of cricket clubs being established in various cities. In 1851 the first intercolonial match was played at Launceston between the Gentlemen of Port Phillip and the Gentlemen of Van Diemen’s Land.

The team had its beginnings in the western district of Victoria, where cricket was played on many stations. The Aboriginal station hands and stockmen employed on those stations began to take part in the game.

With the assistance of Tom Wills, who coached and played for the team, Hayman arranged a match in Melbourne to take place on Boxing Day 1866. While the team was thoroughly beaten by the Melbourne Cricket Club, the match was watched by a crowd of about 8,000 spectators.

A trip to Sydney and more matches were arranged as a result of this success and the idea to tour England was born. However, while in Sydney the team’s funds were embezzled and they were stranded. Charles Lawrence, an ex-all England player who remained in Australia after the 1861–62 tour, took over coaching the team and raised enough funds for the players to return to Victoria.

With new financial backers attracted by the money-making aspects of the scheme, the idea of sending the team to England was pursued and, under the guidance of Hayman and the coaching of Lawrence, the team left Sydney in February 1868. This was the first time an organised sporting group had travelled to England as representatives of Australia.

After arriving in May the team was subjected to a gruelling schedule, playing 47 matches against intermediate-level English amateur teams between May and October 1868. The Australians surprised their competitors with their sporting prowess, winning 14, losing 14 and drawing 19 of their 47 matches.

Unaarrimin, a Wotjobaluk man also known as Johnny Mullagh, was the standout performer. An all-rounder, he scored 1698 runs, bowled 1877 overs – 831 of which were maidens, and took 245 wickets. He also achieved four stumpings while playing as wicketkeeper.

The team also performed a range of ‘traditional’ sports and displayed skills such as boomerang and spear throwing. One member of the team, Jungunjinanuke, also known as ‘Dick a Dick’, used a club and shield to deflect and dodge cricket balls hurled at him by volunteers. These ‘Aboriginal sports’ often drew large crowds due to their novelty and the players’ skill.

The tour provoked mixed reactions from the English public and media. The Times described the tourists as ‘the conquered natives of a convict colony’ and a ‘travestie upon cricketing at Lords’. Questions about the civilising aspects of cricket, the intentions of the organisers and the skill of the players were raised.

Yet, the matches were well attended by a curious public, with the first event at Surrey’s home ground, the Oval, drawing 20,000 spectators.

On their return to Australia, most of the cricketers returned to station life.

In 1869, the introduction of the Aboriginal Protection Act in Victoria, which corralled Aboriginal people onto reserves and required signed permission from the Protector of Aborigines for them to leave, made it difficult for Indigenous cricket players to continue playing competitive cricket.

Unaarrimin, however, continued to play cricket and represented Victoria against a touring England side in 1879, top scoring with 36 in the second innings. The Johnny Mullagh memorial trophy is named in his honour and the Johnny Mullagh Cricket Centre has been established in Harrow, Victoria.

Poster of the Aboriginal cricket team

A poster was produced as part of the promotion of the 1868 tour that depicted each of the players and managers. The photographs were taken by Patrick Dawson at his studio in Warrnambool and assembled into a composite picture that he issued in a slip-case as a souvenir.

The composite photograph was lithographed and the resulting poster, Australian Aboriginal Cricketers, is embellished with decorative scrolls, a coat of arms, boomerangs, spears, a bat and stumps.

Each of the Aboriginal players is identified and is shown either in a traditional cricket stance or holding an Indigenous weapon, such as a boomerang or a spear. This depiction hints at the dual sport and entertainment purposes of the tour. It also suggests the cultural cross-over between the players’ Indigenous heritage and the learned skills of cricket.

CricketerA black and white photograph of a man wearing a cricket uniform holding a bat with fern trees and cricket stumps in the background. The photograph is under glass has a white mat and a wooden frame with a gold inner edge.