Historic first game of the AFLW

On 3 February 2017 the Collingwood Magpies and the Carlton Blues played the first premiership game of the Australian Football League Women’s (AFLW) competition at Ikon Park in Melbourne, Victoria. 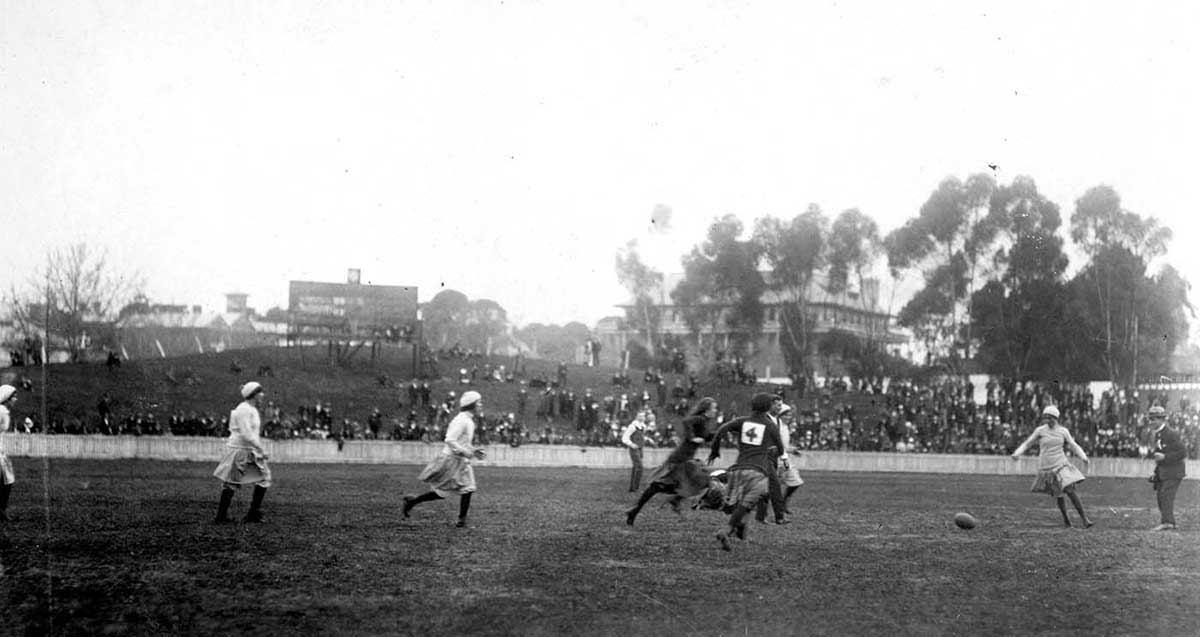 Since the creation of Australian Rules football in the mid-19th century, women have been playing the game and taking part in their own local competitions. Yet it took over 150 years to develop a professional female league.

In 2010 the AFL commissioned a review of women’s football in Australia. The report that followed recommended the development of a professional national women’s competition. This was initially slated to begin in 2020. However, increasing support for the idea brought the start date forward to 2017.

Instead of creating separate female clubs it was decided that existing AFL clubs should have the opportunity to develop a second professional team. Of the 18 AFL clubs, 13 put in bids for AFLW licences.

The league distributed the teams according to existing patterns of support across the country. Four teams represented Victoria, with one each for New South Wales, Western Australia, South Australia and Queensland.

In 2017 the AFLW played a 28-match competition across Australia, in every state and territory except the Northern Territory. All of the matches were free.

The play was slightly modified from the existing AFL format. Each team consisted of 16 rather than 18 players, quarters lasted for 15 rather than 20 minutes and the ball was smaller.

Each AFLW team designed a new uniform whose guernsey and shorts were very similar to the standard AFL ones.

The first match of the new competition was played on 3 February 2017 between the Collingwood Magpies and the Carlton Blues, both representing longstanding Victorian AFL clubs.

It was initially planned as a free event at the Olympic Park Oval in Melbourne, the traditional home ground for Collingwood, which had a maximum capacity of 7,000 spectators. The AFL expected to attract a crowd of between 5,000 and 10,000 people.

However, a series of unadvertised practice matches held across Australia in the lead-up to the official season launch were consistently attracting large crowds. Concerned that demand would outstrip seating capacity, the AFL transferred the first game to Ikon Park stadium, the Carlton Blues’ traditional home ground. It seated up to 22,000 people.

View from the stands

On the night, more than 24,500 people attended the opening match. Many spectators had to sit in the aisles or on fences, and thousands more waited outside the gates. It was the largest crowd that season, and a record for a women-only sporting event in Australia – excluding the Olympic or Commonwealth Games.

The atmosphere was described as hot, noisy and electric. People had been pouring into the stadium since the late afternoon, and emotions were running high. Those present remember feelings of excitement, joy and pride, and many shed tears.

While many spectators recall the diverse make-up of the crowd, even more were struck by the sight of so many women gathered together in one space. 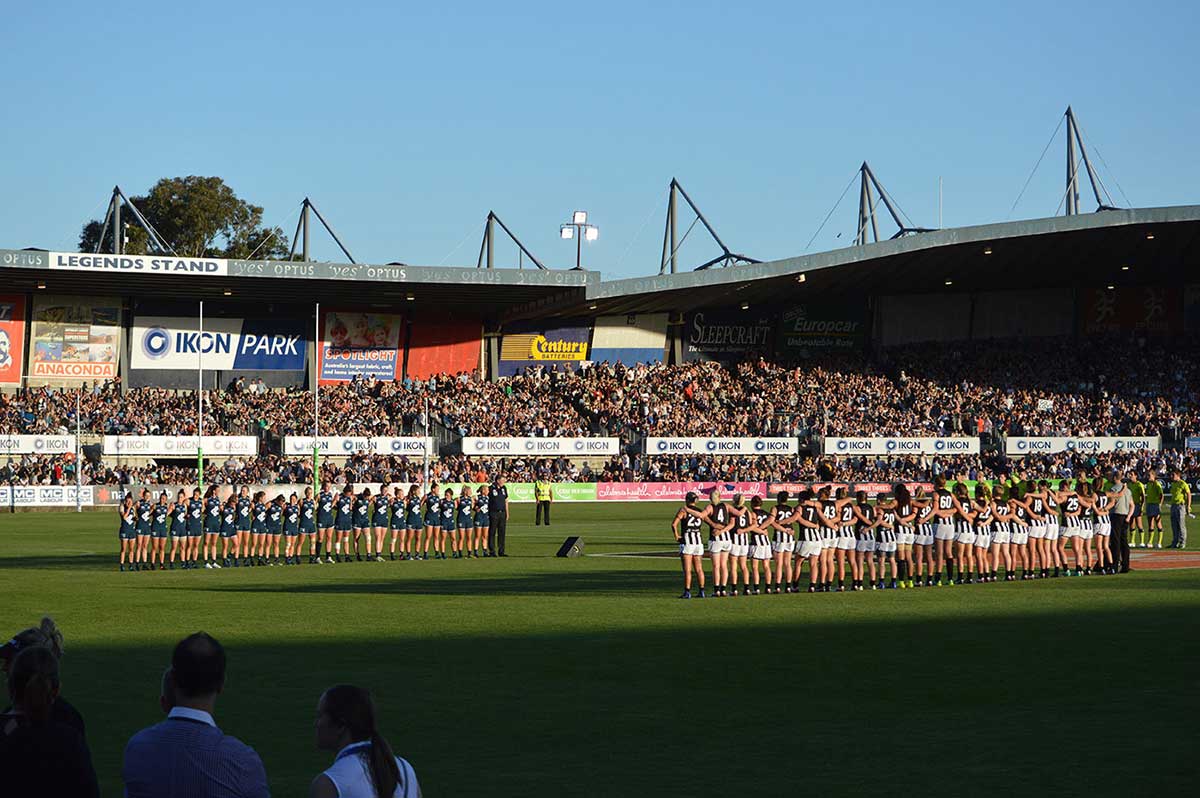 Both teams played ferociously. Sally Tanner, President of the RMIT Women’s Football Academy, said that ‘the hits were bone crunching’.

Kate O’Halloran, a researcher in the field of women’s sport, described the game as ‘really contested, hard football, played with great physicality and intent. These women were out there playing the game of their lives and weren’t going to leave anything out on the field’.

Collingwood’s Jasmine Garner kicked the first goal, but Darcy Vescio, a Carlton forward, was the most outstanding player on the night. She kicked four goals and scored 24 points. The final score saw Carlton defeat Collingwood 46 to 11.

The Magpies vs Blues match launched the first, highly anticipated AFLW season. But the ultimate victors of the 2017 AFLW premiership were the Adelaide Crows, fielding players from South Australia and the Northern Territory. In the grand final on 25 March the Adelaide Crows defeated the Brisbane Lions 35 to 29.

Two new teams, Geelong and North Melbourne, have since been added to the league. North Melbourne’s inclusion led to some games being played in Tasmania.

The AFLW season is still comparatively short, just two months long with only seven rounds. By contrast, the AFL’s season is spread over six months and 23 rounds. The pay gap between AFLW and AFL players continues to be striking.

Overall, the new league has been very well received in Australia. Entry to the matches is still free, television ratings are high and crowd attendance remains strong. The AFLW 2019 grand final attracted 53,034 spectators.

Erin Phillips' 2017 Adelaide Crows away guernseyA short sleeved, Adelaide Crows Australian Rules Football guernsey. It is white with a picture of a blue crow in the centre with red and yellow dots forming a circle behind it. Above the crow is the 'AFL' logo on the left and a 'Workskil' logo on the right. The back of the shirt has a large blue 13 printed on it. There is a sign...

Rob Hess and Brunette Lenkić, ‘Growth of women’s football has been a 100-year revolution – it didn’t happen overnight’, February 2017, The Conversation

Brunette Lenkić, ‘Women in sport: The physical is feminine’, May 2017, The Lifted Brow