The story of women's suffrage in live-sketch animation, as told by historian David Hunt

The legislation was the result of a decade-long struggle to include women in the electoral process. It not only granted women in the colony the right to vote but allowed them to stand for parliament.

This meant that South Australia was the first electorate in the world to give equal political rights to both men and women.

It follows that it is an arbitrary and unjust Government which compels its support from those whose will in relation to it is never consulted. That as women assist in maintaining the Government they have a right to say how and by whom they shall be governed, in other words – to the vote.

In the 19th century Australian women had very few legal rights. Once married, these rights were further limited as they were transferred to her husband. Married women surrendered all property to their husbands and any wages earned.

Husbands were the sole legal guardian of any children from a marriage and could remove them from a mother’s care at any time, even bequeathing their care to other people in their will.

Before the 1870s women were not able to file for a divorce. Even after legislation was changed in the 1880s it was still difficult. Rates of abandonment were high and deserted women were usually forced to find paid work that paid up to two thirds less than a man for doing the same job.

Without the support of a trade union they often suffered unsafe and unregulated working environments in the sweated clothing trades. Trade unions resisted women’s involvement in the workforce, believing it would drive down rates of pay for men. 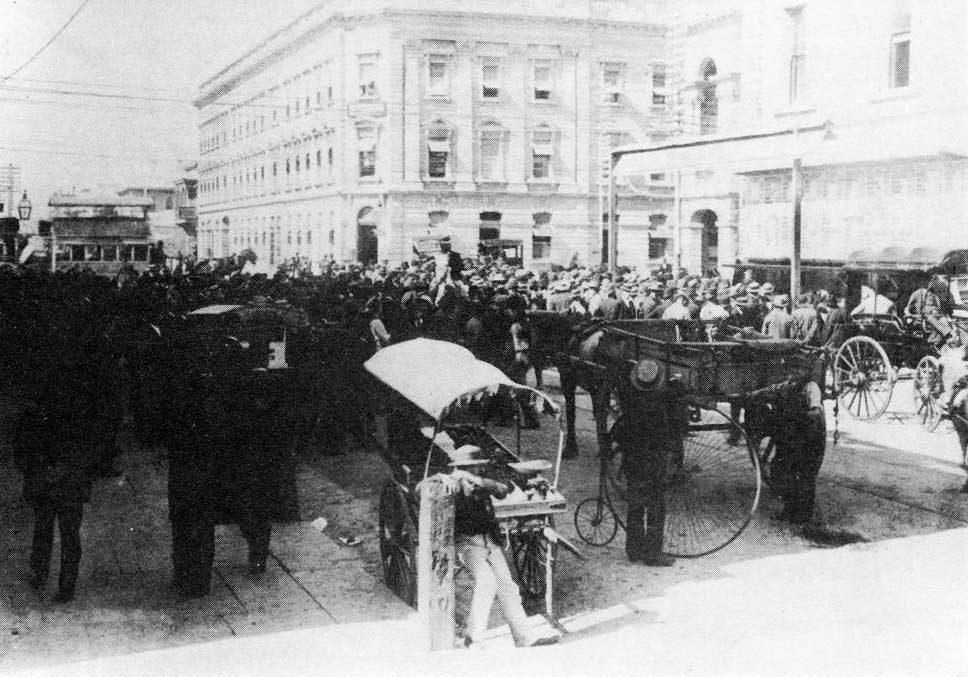 Election day in Adelaide, 25 April 1896 – the first Australian election and referendum in which women could vote

However, social attitudes were slowly changing. Australians prided themselves as forward thinking, and not subject to the more traditional social restrictions of the United Kingdom.

In South Australia women who were property owners could vote in local elections from 1861 and Indigenous men were enfranchised when all males gained the vote in the colony in 1856.

Education for women was expanding out of the home and into schools and universities. Women were gaining paid work in a wider range of employment sectors, although terrible conditions persisted. Women began to speak out against gender inequality in reports and journals.

Women believed that if they could vote they could elect candidates who would legislate to improve society generally and strengthen the position of women and children in particular.

A number of organisations threw their support behind the female suffrage movement including the Christian Women’s Temperance Union and the Social Purity Society.

Female suffragists struggled against prejudicial traditional views of women that were embedded in society and the law.

Groups agitated for change in many ways. Letters were written to newspapers and magazines, public speeches were made and rallies and marches were held. Groups of women visited parliament and held discussions with important political figures including the state’s premier. Signatures were collected from across the colony for the longest petition that has ever been presented to the South Australian Parliament.

With more than 11,600 signatures and measuring around 400 feet in length with its pages glued end to end, the petition was used to show the government that both men and women supported women’s right to vote.

Before the 1894 Bill there had been three unsuccessful attempts to gain equal voting rights for women in South Australia.

Many parliamentarians felt that women were not emotionally or intellectually capable of properly participating in politics. Others also felt that women were stepping outside their traditional roles and that giving them the vote would undermine a husband’s position in the family.

However, following an election in early 1894, the Labour Party, which was sympathetic to the women’s cause, formed government.

The Constitutional Amendment (Adult Suffrage) Bill was presented to the Legislative Council on 23 August 1894.

A conservative effort to derail the Bill by introducing a woman’s right to stand for parliament as well as the right to vote did not stop the Bill narrowly passing. It was then sent to the Legislative Assembly where three months elapsed during which a slight amendment was made allowing women to postal vote as well.

After much debate, the Bill was finally passed 31 votes to 14 in front of a crowd of around 200 women. The Bill was officially made law in 1895 when signed by Queen Victoria. South Australian women then became the first in the world who could not only vote but also stand for parliament.

Equal enfranchisement therefore applied to all citizens of South Australia, including the Indigenous men and women of the colony.

The first South Australian election in which women could participate was held in 1896. The female presence was remarked upon by many newspapers, including the Adelaide Observer, which said:

Women were everywhere, and their presence … no doubt had a refining influence. Never have we had a more decorous gathering together of the multitude than that which distinguished the first exercise of the female franchise on Saturday April 25 1896.

Key figures in the Australian Dictionary of Biography: