1856: Secret ballot introduced and all adult men given the vote 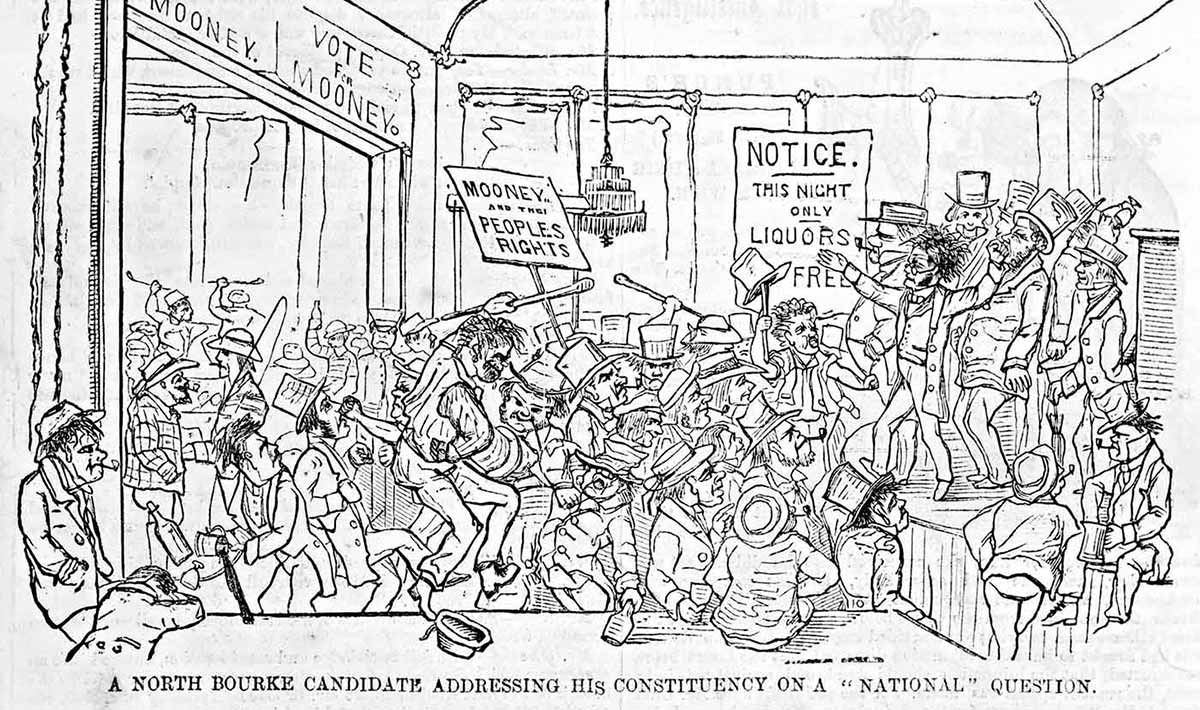 'Electioneering in the pub' by Edgar Ray and Frederick Sinnett

Demands for electoral reform were a major political issue in Australia from the 1840s and increased in intensity with the arrival of large numbers of men during the 1850s gold rush.

Reform became a reality in 1856 with the passing into law of universal male suffrage in South Australia and the secret ballot in Victoria, Tasmania and South Australia.

Other Australian states followed suit soon afterwards, and the ‘Australian ballot’ became an international precedent affecting political reform in Britain and the United States in the 1870s and 1880s.

A man came here to benefit himself and his family and the fact that a large family prevented a man from acquiring property is no reason why he should be disenfranchised.

The introduction of the secret ballot in live-sketch animation, as told by historian David Hunt.

When convict transportation to New South Wales ceased in 1840 many residents believed the colony was ready for self-rule, and demands for a new political system increased. In 1842, the British Parliament passed the New South Wales Constitution Act, which for the first time required some members of the Legislative Council to be elected.

The 1843 Legislative Council election in New South Wales was the first of its kind in Australia. Elections were rough and tumble exercises run along similar lines to those in England – where ballots were cast in full view of the assembled crowds.

The only people allowed to vote were men who owned land worth £200 or more or who rented a dwelling for £20 or more a year.

Alcohol, bribery, coercion and violence were intrinsic to the process, and elections at this time often ended in riots resulting in many injuries. In 1843 two men were shot – one in Sydney and another in Melbourne. As the Irish journalist William Kelly said of the early Victorian polls, they were, ‘nothing more or less than pantomime in a frenzy’.

The passing in London of the Australian Colonies Government Act in 1850 led to, ‘the separation of Port Phillip from New South Wales and the extension of representative institutions to Van Diemen’s Land and South Australia’.

It was a huge step towards self-rule and accelerated deliberations in the new colony of Victoria (established in July 1851), as well as the other colonies, about what form governments would take and how they would be elected.

Eligibility to vote was extended to men who owned land worth at least £100 or rented or leased property for £10 or more a year.

This was to ensure that squatters on pastoral leases could vote and that free settler tradesmen didn't have less voting rights than successful ex-convicts.

The 1850s gold rushes in New South Wales and Victoria brought a flood of immigration to Australia. Among the migrants were many opposed to the awkward attempts by government to impose order and tax incomes on the goldfields.

The Chartist movement, which had promoted more working class representation in British politics, gained traction in Australia. Its People’s Charter argued for the elimination of property requirements to vote, use of the secret ballot, the right of all males to stand for election, and salaries for Members of Parliament.

Public feeling in Australia in support of these measures was strong. The Eureka Stockade rebellion led to the election in 1855 of eight Victorian goldfields members, all of whom supported the secret ballot and adult male suffrage.

Across the border, South Australia, with its history as a settler colony with little convict history, saw itself as a model democratic society and started debating the form of its new government as soon as the Australian Colonies Government Act was passed.

In the drafting of the colony’s Constitution Act of 1855 and Electoral Act of 1856 there was heated deliberation between conservative and liberal members over male suffrage, which was eventually included in the Electoral Act.

South Australia therefore became known as the most liberal electorate in the world. Victoria and New South Wales followed suit in 1857 and 1859 respectively.

The British parliament passed the Victorian Constitution Act in October 1855. In Victoria itself, lobbying began almost immediately over what form the colony’s first fully responsible government would take.

In December of that year, an electoral Bill was submitted to the Victorian Cabinet by a member of the Legislative Council, William Nicholson, the former Mayor of Melbourne.

It stated, ‘That in the opinion of the House any new electoral act should provide for electors recording their votes by secret ballot.'

In Victoria opposition to the Bill was fierce, especially from the wealthier sections of the Legislative Council. The Attorney-General, WF Stawell, denounced the system as ‘un-English and unconstitutional’.

Debate moved back and forth over the next few weeks and caused the downfall of WC Haines’s caretaker government. Nicholson was called on to form a government but was unable to, and Haines was recalled.

At this point, advocates of the secret ballot had little idea about how such a system could be implemented. The challenge was taken up by Henry Samuel Chapman, one of the legislature members, who had been a reform activist in Britain, Canada, New Zealand and Tasmania before arriving in Melbourne to practice law in 1854.

Chapman devised a system where government printed ballot papers with the names of all nominees and distributed them through its election officials. The voter would then delete the names of candidates he did not support.

Reluctantly, Haines agreed to let the re-worded electoral Bill be brought before the legislature. It was passed and the new law took effect 19 March 1856. The election of the first Victorian parliament by this system was held between August and October 1856.

Tasmania and South Australia were also debating the implementation of the secret ballot in 1856. In Tasmania, the ballot was included in the Electoral Act 1856 which took effect 24 September 1856.

South Australia passed secret ballot legislation only a month after Victoria with New South Wales following suit in 1858. However, South Australia made a change to the voting mechanism whereby instead of deleting the names of unwanted candidates, voters marked an X beside the name of the candidates they wanted.

This is the system that went on to be implemented in Britain in 1872 and across the United States after the presidential elections of 1884. The ‘Australian ballot’ became an important part of American reformers’ attempts to clean up politics and by 1910 it had been adopted by almost all US states.