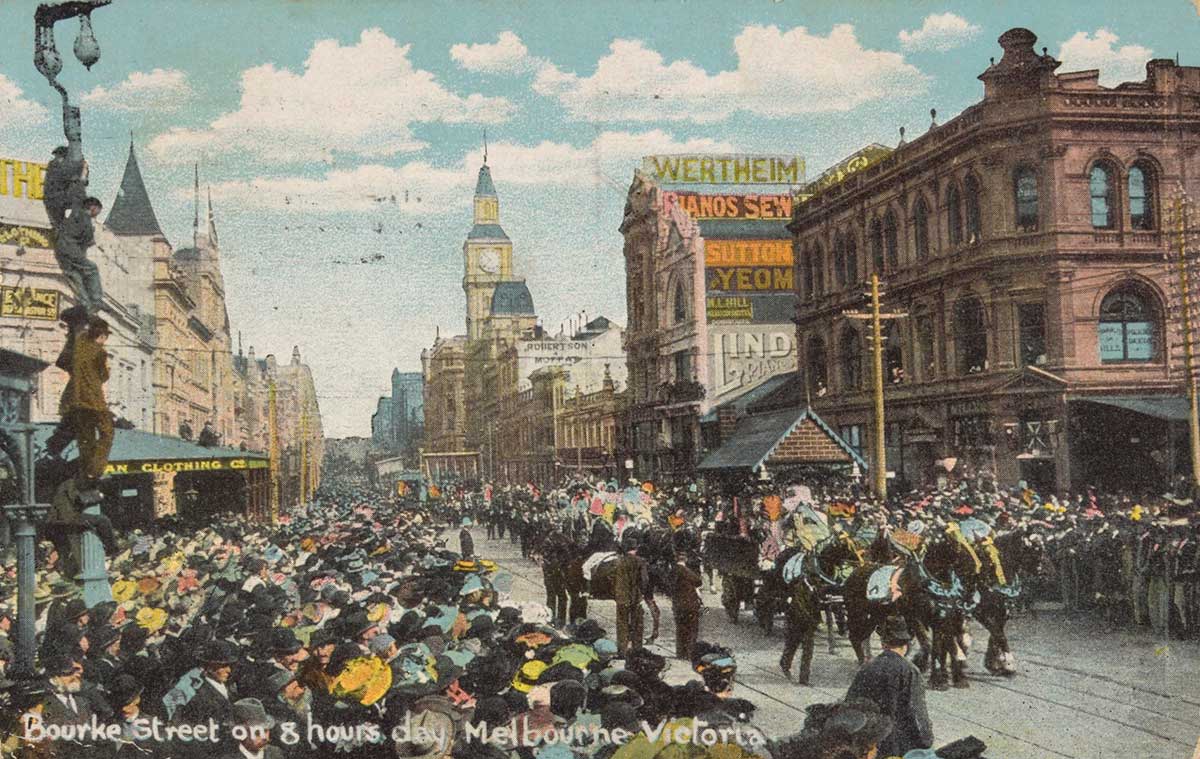 On 21 April 1856 stonemasons in Melbourne downed tools and walked off the job in protest over their employers’ refusal to accept their demands for reduced working hours.

This brought the employers to the negotiating table and led to an agreement whereby stonemasons worked no more than an eight-hour day.

It was the first of a long, hard-fought series of victories that led to Australia having one of the most progressive labour environments in the world by the early 20th century. 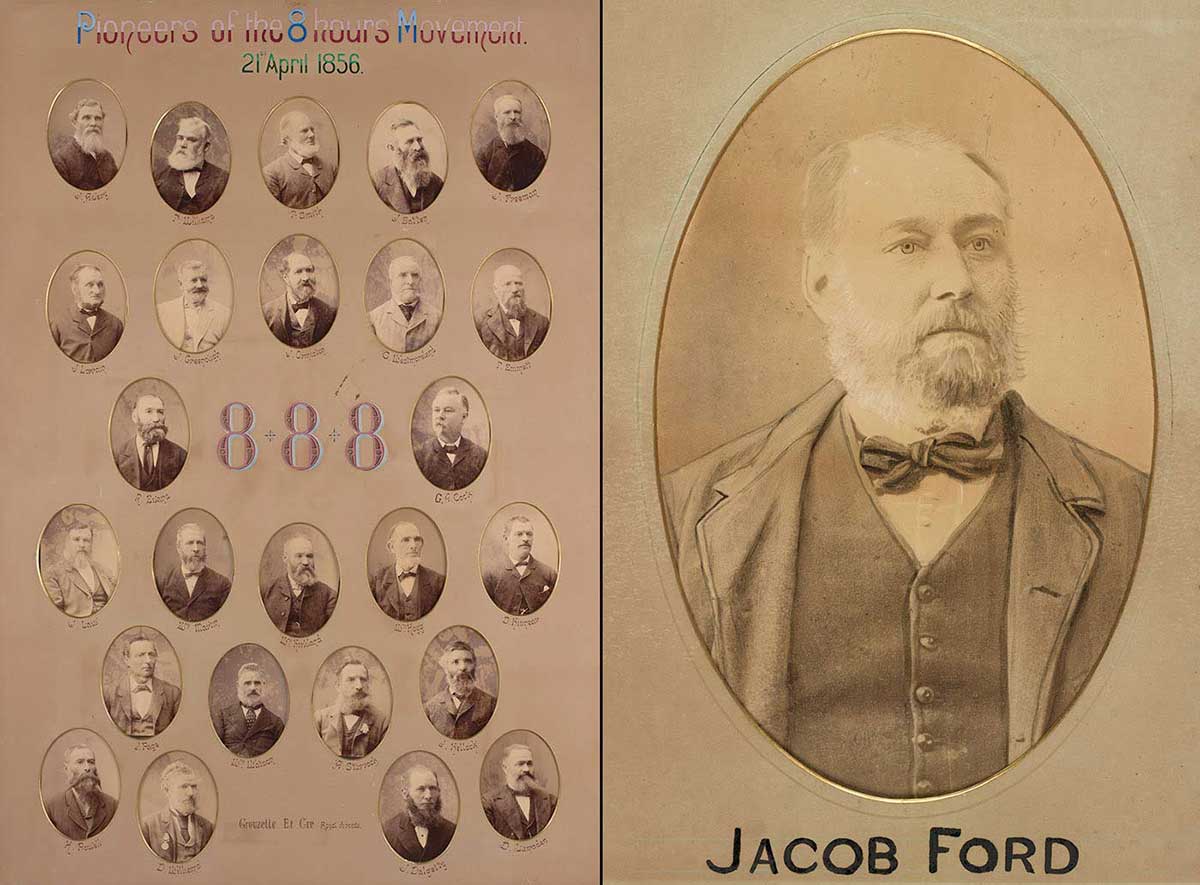 When the first convicts arrived in Australia in 1788, there was little protection for them around their working conditions. Typically convict labourers worked from sunrise to sunset with a part day on Saturday. Sunday was a day of rest but they had to attend church.

Labouring in the colony was part of a convict’s punishment and free settlers came to see convicts as a ‘free’ labour force. The first industrial action in Australia was in 1791 when convicts went on strike demanding daily rather than weekly food rations.

In the early years of the colony, the relationship between employers and employees was governed by the British Masters and Servants Acts (and after 1828 the equivalent New South Wales legislation), which were weighted heavily in the interests of employers. Employees could be prosecuted for a range of contraventions including drunkenness, absence without leave and inattention to duty.

Penalties could include deduction of wages or imprisonment. These were only enforceable through the courts, but since magistrates were of the same class as the employers most cases were found in the employers’ favour.

In 1822 the convict shepherd James Straighter was sentenced to 500 lashes, one month’s solitary confinement and five years penal servitude for ‘inciting his Master’s servants to combine for the purposes of obliging him to raise the wages and increase the rations’.

Between 1830 and 1833 the first Australian unions were formed by associations of skilled workers such as shipwrights, printing compositors and cabinet-makers.

However, these early trade unions faced stiff opposition from employers and government. In 1840 the government used convict compositors to help break a strike by the Society of Compositors.

As the colony started to grow in the early part of the 19th century, new businesses, including many shops, started up. With the advent of street lighting in 1841, shop employees had to work later and later until they were typically working 14 hours a day.

Such long hours led to the formation of the Early Closing Movement, which in 1844 sought to have working hours reduced from 14 to 12 hours a day.

Convict transportation to New South Wales ceased in 1840. From then, all new felons were diverted to Tasmania, which led to the formation in 1847 of the Anti-Transportation League in that colony. The league succeeded in stopping transportation to the east coast by 1852.

The end of transportation created a shortage of workers that increased dramatically through the 1850s as a great many working men moved to the goldfields. Unions were now in a much better position to campaign for better working conditions.

On 4 February 1853 the Operative Masons’ Society was re-formed at a meeting in Clark’s Hotel, Collingwood, Melbourne. The union had suspended operations because so many members had moved to the goldfields.

One of the organisers was James Stephens, a mason recently arrived from Britain where he had been a member of the Chartist movement, which advocated for a more representative parliamentary system. He had participated in the 1839 Newport Rising riot where police killed 20 Chartist protesters.

The union put forward three main arguments for a shorter working day. The first was that Australia’s harsh climate demanded reduced hours. The second was that labourers needed time to develop their ‘social and moral condition’ through education. The third was that workers would be better fathers, husbands and citizens if they were allowed adequate leisure time.

On 26 March 1856 workers called a public meeting at the Queen’s Theatre to make a stand on improving working conditions. At the meeting it was announced that ‘the time has arrived when the system of 8 hours should be introduced into the building trades and that after the 21st of this month we promise to work 8 hours and no longer’.

Negotiations between the union and the building companies broke down and on 21 April stonemasons, led by Stephens, downed tools at the construction site of the law faculty buildings at Melbourne University and walked off the job.

As Stephens said, ‘It was a burning hot day and I thought the occasion a good one, so I called upon the men to follow me, to which they immediately consented, when I marched them … to Parliament House.'

Stonemasons from other construction sites along the way joined the march until they eventually reached the Belvedere Hotel where a banquet was organised to mark the event.

In the months to come, negotiations with employers and the government continued until an agreement was reached whereby stonemasons would work an eight-hour day but collect the same wage they had previously been paid for 10 hours.

Initially only a minority of workers, mainly in the building trades, won the eight-hour day. Most workers, including women and children, generally worked longer hours for less pay.

The fight for working conditions continued throughout the 19th century. It was not until 1916 that the Eight Hours Act was passed in Victoria and New South Wales.

It would not be until January 1948 that the Commonwealth Arbitration Court approved a 40-hour, five-day working week for all Australians.

Waterside Workers Federation of Australia Sydney Branch, In memory of our fallen members at the frontThis banner was used in May Day rallies from 1901-1950s and was painted by Edgar Whitbread.

Julie Kimber and Peter Love, The Time of their Lives: The Eight Hour Day and Working Life, Australian Society for the Study of Labour History, Melbourne, 2007.