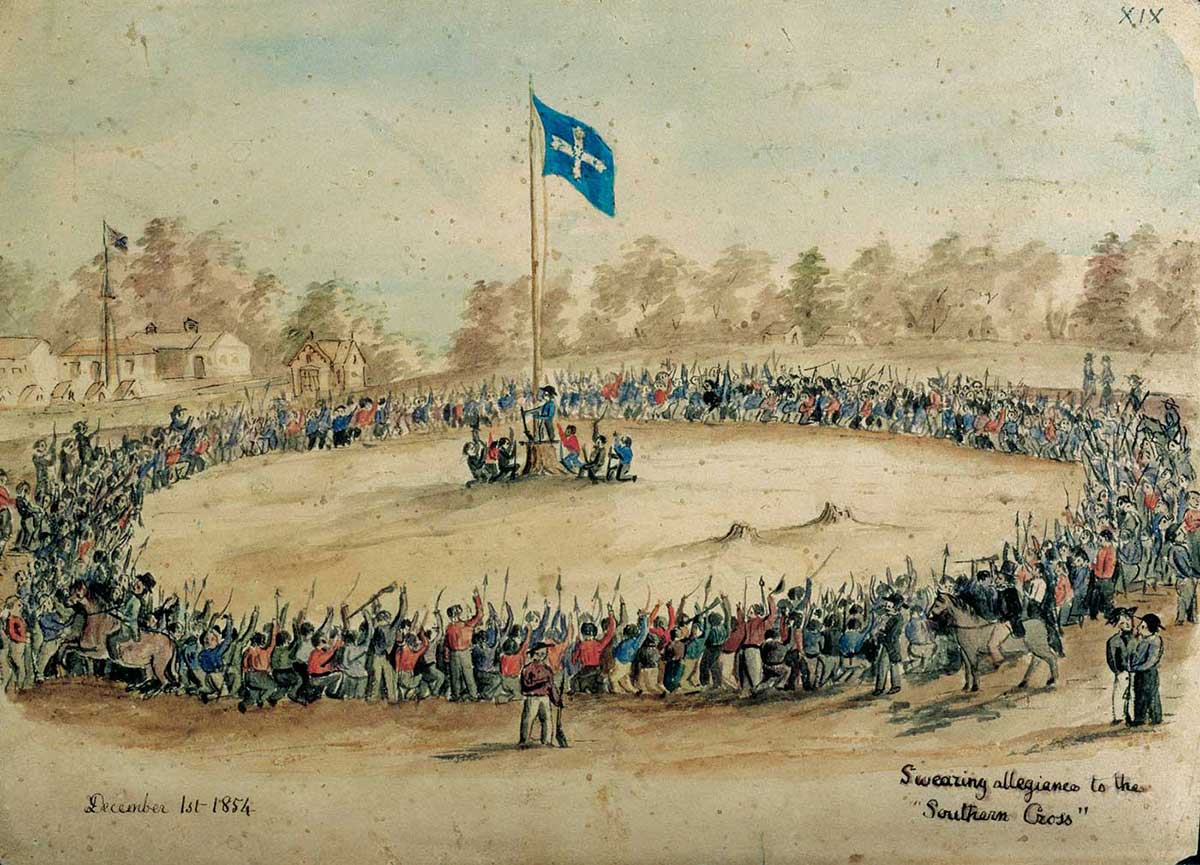 Swearing Allegiance to the Southern Cross by Charles A Doudiet

On 30 November 1854 miners from the Victorian town of Ballarat, disgruntled with the way the colonial government had been administering the goldfields, swore allegiance to the Southern Cross flag at Bakery Hill and built a stockade at the nearby Eureka diggings.

Early on the morning of Sunday 3 December 1854, when the stockade was only lightly guarded, government troops attacked. At least 22 diggers and six soldiers were killed.

The rebellion of miners at Eureka Stockade is a key event in the development of Australia’s representational structures and attitudes towards democracy and egalitarianism.

It is my duty now to swear you in, and to take with you the oath to be faithful to the Southern Cross. Now hear me with attention. The man who, after this solemn oath does not stand by our standard, is a coward at heart … We swear by the Southern Cross to stand truly by each other, and fight to defend our rights and liberties.

The rebellion at Eureka Stockade in live-sketch animation, as told by historian David Hunt

In early 1851 the government announced that gold had been discovered in Australia by Edward Hargreaves, John Lister and William, James and Henry Tom, near Bathurst, New South Wales. Gold was also discovered in Victoria in June of that year.

Gold was the catalyst for great change in Australia. The belief that you could dig your own fortune attracted people from across the country and around the world. Melbourne lost half its men to the goldfields, crews abandoned their ships in port, shepherds deserted their flocks; the call in London, California, Germany and Italy was, ‘off to the diggings’.

This massive influx of people was a serious challenge for the government. There were limited finances to provide services and the colonial budget was already in deficit.

To raise funds, but also to discourage a flood of people moving to the diggings, New South Wales Governor Charles Fitzroy and Lieutenant-Governor Charles La Trobe of Victoria, imposed a 30-shilling a month licence fee on miners.

This was a substantial sum for most diggers and when the easily obtainable surface gold began to run out in 1852 the licence fee became a point of contention.

In that year the 35,000 miners in the Victorian goldfields were producing about five ounces of gold per head. By 1854 that population had almost tripled while production had decreased to 1½ ounces per head.

Conflict in the goldfields

Starting in 1853, miners began to gather in ‘monster’ meetings to voice their complaints. Delegations presented their concerns to Governor La Trobe, but he was unreceptive to the requests.

Many of the diggers were politically engaged – some had participated in the Chartist movement for political reform in Britain during the 1830s and 1840s while others had been involved in the anti-authoritarian revolutions that spread across Europe in 1848.

The situation on the goldfields was tense as police regularly ran ‘licence hunts’ to track down diggers who hadn’t paid their fees. The miners claimed the police were extorting money, accepting bribes and imprisoning people without due process.

On 6 October 1854 the Scottish miner James Scobie was killed in an altercation at the Eureka Hotel in Ballarat. The proprietor, JF Bentley, was accused of the killing.

A court of inquiry was held and Bentley was quickly exonerated. The diggers sensed a miscarriage of justice; not a difficult conclusion since one of the court members, John D’Ewes, was a police magistrate well known to have taken bribes from Bentley.

On the 17 October 1854 about 5,000 men and women gathered to discuss the case. They decided to appeal the decision, but after the dispersal of the crowd, a small group decided to set fire to the Eureka Hotel. Having done so, they were arrested by police.

Over the next weeks the miners met and elected delegates who, on 27 November 1854, approached the new Victorian Governor, Charles Hotham.

They demanded the release of the men who burned down Bentley’s hotel but the governor took offence to having demands made of him and dismissed their grievances. He then despatched 150 British soldiers of the 40th Regiment of Foot to Ballarat to reinforce the police and soldiers already stationed there.

Sensing a change in atmosphere, the diggers held another mass meeting on 29 November 1854 at Bakery Hill, there the newly created Eureka flag was unfurled.

The police were unsettled by the hostility building among the diggers and decided to implement a licence hunt the next day. That morning, as the police moved through the miners’ tents, the diggers decided they had had enough, they gathered and marched to Bakery Hill.

At this meeting the charismatic Irishman Peter Lalor became the leader of the protest. Lalor led the miners to the Eureka diggings, where the men and women joined him in an oath: ‘We swear by the Southern Cross, to stand truly by each other, and fight to defend our rights and liberties’.

Then the company gathered timber from the nearby mineshafts and created a stockade. 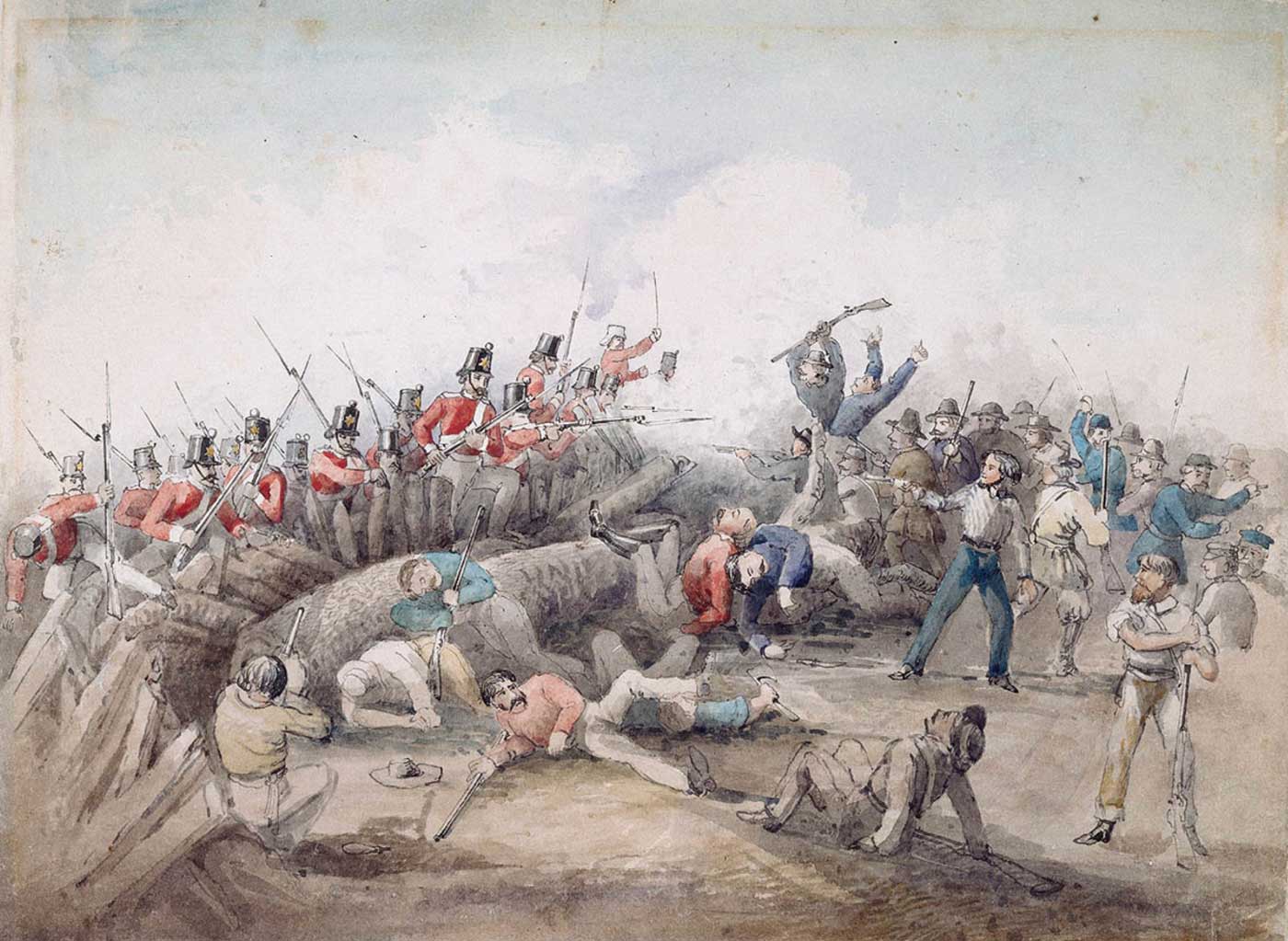 Over the next two days, the men and women remained in and around the stockade, many performing military drills in preparation for possible conflict. This was too much for the Commissioner of the Ballarat goldfields, Robert Rede. He called for the police and army to destroy the stockade at first light on Sunday 3 December 1854.

That morning almost 300 mounted and foot troopers, and police attacked the stockade. The assault was over in 15 minutes, with at least 22 diggers (including one woman) and six soldiers losing their lives.

The police arrested and detained 113 of the miners. Eventually 13 were taken to Melbourne to stand trial. Governor Hotham called for a Goldfields Commission of Enquiry on 7 December 1854, but the citizens of Victoria were opposed to what the government had done in Ballarat and one by one the 13 leaders of the rebellion were tried by jury and released.

In March 1855 the Commission of Enquiry released its recommendations. The licence fee was removed, replaced by an export duty and a nominal £1 per year miner's right. Half the police on the goldfields were sacked and one warden replaced the multitude of gold commissioners (who had issued the licences), many of whom were corrupt.

Twelve new members were added to the Victorian Legislative Council, four appointed by the Queen and eight elected by those diggers who held a miner’s right. One of these members was Peter Lalor who had survived the Eureka clash but had been wounded in the left arm, which was later amputated.

Victorian three month gold license [sic] issued to J. Hedger on 5 October 1854A damaged and discoloured piece of paper, printed and annotated with dark ink on one side only. Text reads in part: '£2 / GOLD LICENSE [sic] THREE MONTHS / No. 138 / Fifth October 1854 / J. Hedger'.

Electronic Encyclopaedia of gold in Australia