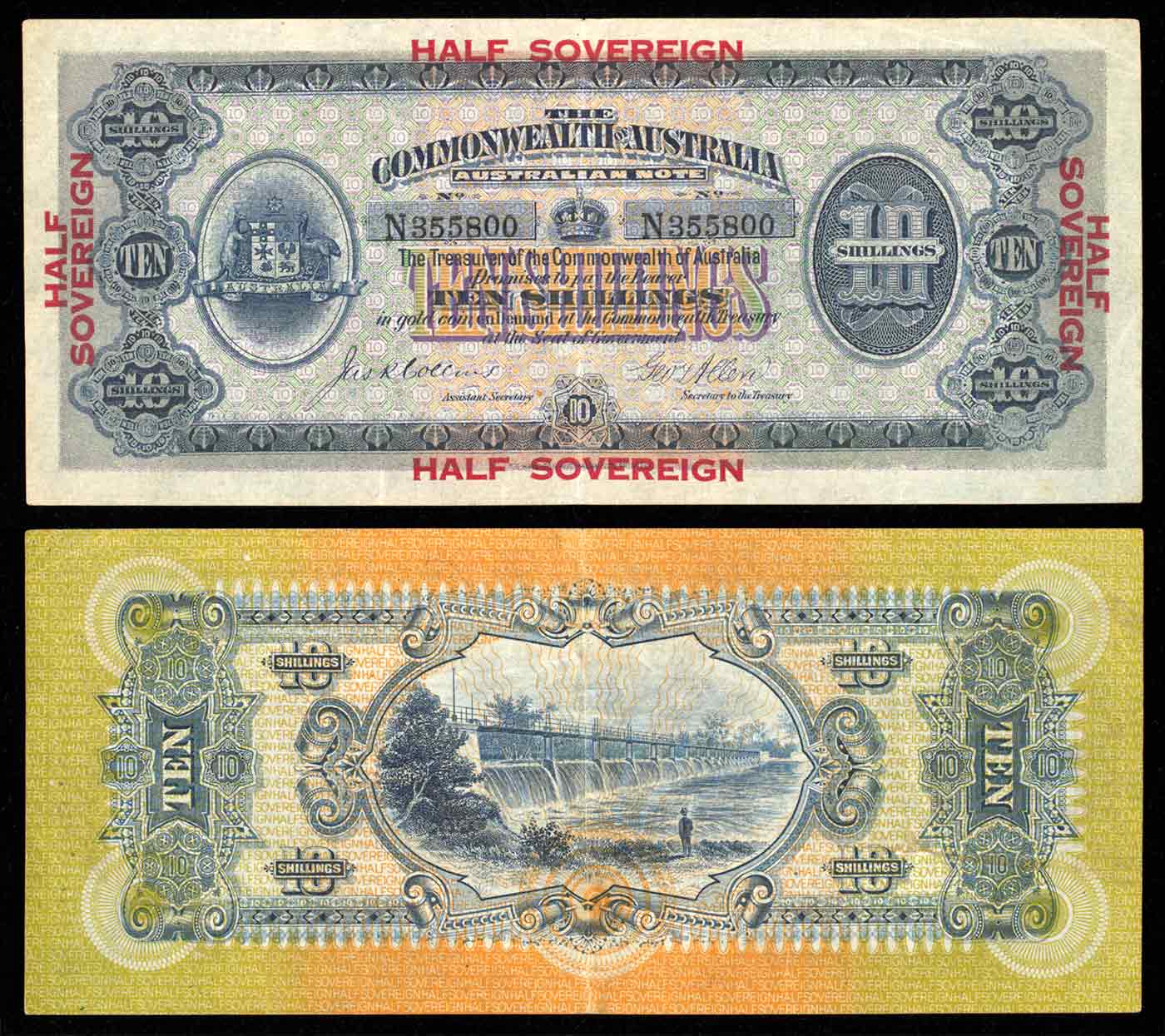 ‘Next month I hope to see the new Australian Note Issue printed in the Commonwealth. When the ten-shilling note is issued I believe it will be very popular, and probably will add about £1.000.000 to the circulation, and it will also be a great convenience to the public. They are beautiful notes of Australian design, and I feel sure that when the people see them they will appreciate them from an artistic, as well as a currency, point of view.’

Australia’s first banknote was stamped with its serial number at a ceremony on 1 May 1913 – one of several nation-building events at which Prime Minister Andrew Fisher officiated in the lead-up to the election on 31 May. Fisher presented the first 3 10-shilling notes to the Governor-General, Lord Denman, his daughter Judith, who numbered the first note, and son Thomas. The notes, bearing a design of the Australian coat of arms on the front and an image of Goulburn Weir on the back, were the first government-issued 10-shilling notes printed in the world, and were intended to replace the half-sovereign gold coin.

At Federation, nearly 90 per cent of currency in circulation in Australia comprised British coins. In 1910 Prime Minister Alfred Deakin had four denominations of silver coins struck by the Royal Mint to replace the British coins. The remaining 10 per cent of circulating currency was in the form of banknotes issued by private banks. As long as the issuing bank’s assets were believed to be sufficient to cover the value of the notes it printed, the notes would be honoured. When there was a panic, banks would fail and take the assets of their depositors with them. There were bank collapses in most decades of the 19th century; the most serious occurring in 1893 in Victoria when, in the space of 6 weeks, 12 banks – accounting for two-thirds of all banking assets in Australia – closed their doors.

The Australian Notes Act of 1910 transferred the authority to print paper money to the Australian Government, which, from 1911 to 1913, circulated the old private banknotes overprinted by Treasury with the words ‘Australian Note’. These repurposed notes, dubbed ‘Fisher’s Flimsies’, initially raised fears about the value of paper currency. The 31 December 1911 issue of Perth’s Sunday Times newspaper carried the headline, ‘Will “Fisher’s Flimsies” depreciate?’

Between 1913 and 1915 other denominations of currency notes, ranging from £1 to £1000, were printed. With the Australian economy heavily reliant on mining and rural production – gold and wool accounting for 60 per cent of all exports – each of the new notes featured designs of the industries and infrastructure that would build the nation’s wealth. The notes also carried the words: ‘The Treasurer of the Commonwealth of Australia promises to pay the Bearer in gold coin on Demand at the Commonwealth Treasury at the Seat of Government’, words intended to still fears of depreciation.

The 10-shilling notes of 1913 represent both a significant stage in the establishment of Australia’s financial security and a symbol of the promotion of a sense of national identity.