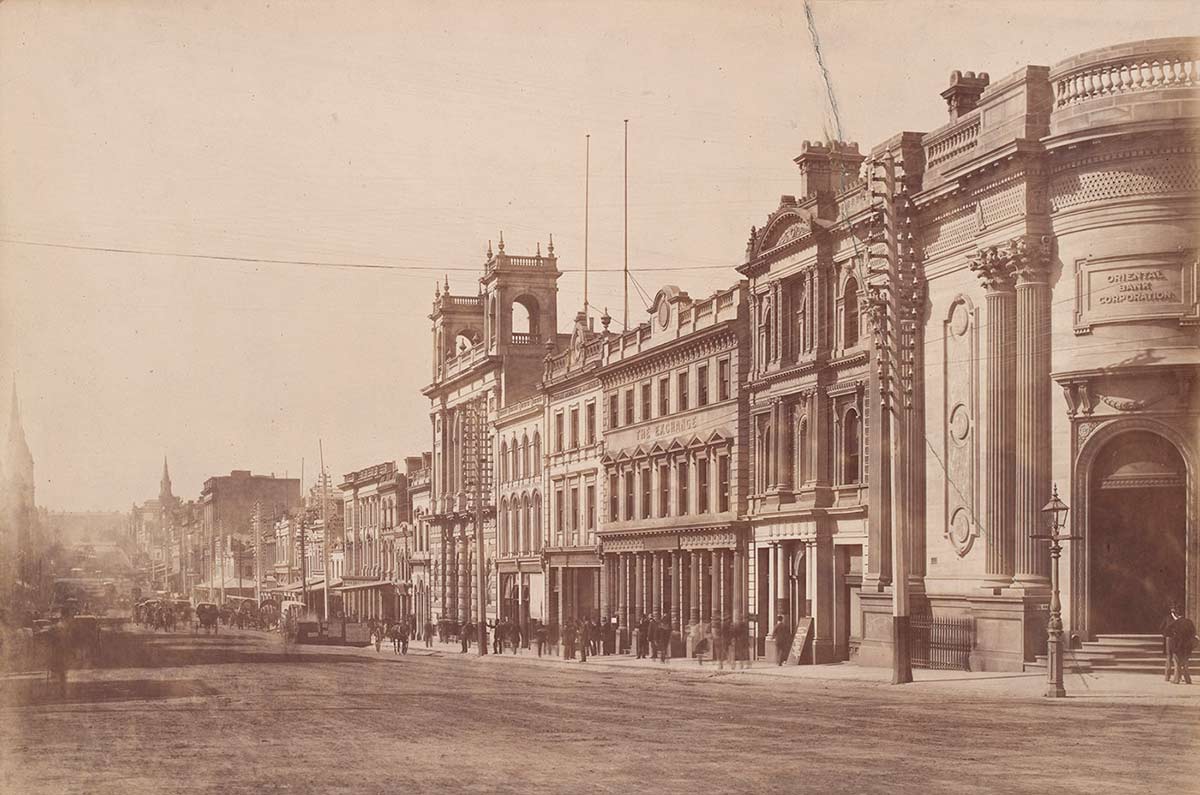 In the 18 October 1852 issue of the Argus, Edward Khull listed 14 companies in which investors could buy shares.

This was the first stock listing in Australia and led to the formation of the Melbourne Brokers Association, which traded from rented space in the Hall of Commerce on Collins Street from 1859.

It was Australia’s first stock exchange.

It has been the subject of constant and increasing complaint that while there are recognised marts and markets for every kind of produce, imported and otherwise, there is none for a larger and more important item in the wealth of the colony … there is no recognised Stock and Share Exchange, where quotations of stocks and shares could be made to show a real market value …

A stock exchange enables people to buy shares in companies listed with that exchange. For the companies, these investments raise capital, which enables the company to grow. For investors, there is the expectation that the shares they buy will increase in value.

In 1531, the bourse opened in the Belgian city of Antwerp, providing a place where traders could exchange promissory notes and commodities.

As word spread of the success of the bourse, a similar exchange was opened in London in 1571 by Queen Elizabeth I.

The Royal Exchange grew and brokers began to offer shares in speculative trading expeditions that British merchants were undertaking around the globe.

The Dutch East India Company or VOC, trading through the Amsterdam stock exchange, is the first instance of a company offering shares in itself.

The VOC was created in 1602 to better manage the burgeoning spice trade with the Dutch East Indies, present-day Indonesia.

The VOC was granted a monopoly on this trade, and sale of shares in the company increased. Shareholders were amply rewarded for their investment, with the company paying an average dividend of 16 per cent per year for almost 40 years after its formation.

Meanwhile, stock-brokering through the London Royal Exchange was encouraged during the economic restructuring undertaken in the 1690s by King William III to raise funds to pay for the many wars in which England had engaged in over the previous two decades.

The stockbrokers, however, were accused of being disorderly and boisterous and were banished from the exchange. These traders moved to the coffee houses along Exchange Alley and continued their business from there.

John Castaing, a broker, began posting a regular list of stock prices in 1698 and these listings mark the beginning of what became the rival London Stock Exchange.

The early economy of New South Wales was constrained by the small size of the colony, the lack of ready cash, and the British Government’s desire to spend as little on the colony’s maintenance as possible.

The prohibition on trade demanded by the British East India Company had continued for some years and the colony’s few resources were largely controlled by a small number of business people. There was little need for companies to attract shareholders.

This situation changed with the gold rushes of 1851. In that one year, the population of the new colony of Victoria doubled and between seven and eight million pounds worth of gold was taken from the diggings.

This incredible economic and social transformation led to investment opportunities in banking, and rail and road transport from Melbourne to the goldfields.

These investment prospects led Edward Khull, who described himself as a ‘Stock and Share Broker’, to publish the first Melbourne stock and share list in the Commercial Intelligence section of the Argus newspaper on 18 October 1852. Fourteen companies were listed, including:

This list grew slowly and continued in circulation until 1859 when it was replaced by a list issued by the Melbourne Brokers Association. The brokers traded in Australia’s first stock exchange a rented space in the Hall of Commerce on Collins Street, remaining there until 1880.

The Melbourne Brokers Association Exchange then moved to several different locations around the city until the official Stock Exchange of Melbourne (established 1884) moved into its own purpose-built premises at 380 Collins Street in 1891.

Growth of the markets

The Stock Exchange of Melbourne grew out of and flourished in the economically tumultuous 1870s and 1880s when a huge influx of British capital flooded into ‘Marvellous Melbourne’.

It codified the behaviour of brokers, company listing requirements and trading processes. These practices remained unchanged for almost a century.

The market contracted during the 1890s depression but grew again with the incredible success of mining in Broken Hill.

This pattern of boom and bust drove the stock exchange through the first half of the 20th century but the stock market grew exponentially with the steady growth and diversification of the Australian economy after the Second World War.

In 2017 the ASX had an average daily turnover of nearly $5 billion. It is the 14th largest stock exchange in the world.

Stock Exchange and Collins Street, MelbourneAn unused postcard featuring a coloured photograph of a busy street scene. The street is lined with multi storey buildigns, and have pedestrians, trams, horses and carriages on it. There are poles, wires and associated equipment in the photograph as well. The text in the top right corner reads "Stock Exchange and / Collins Str...