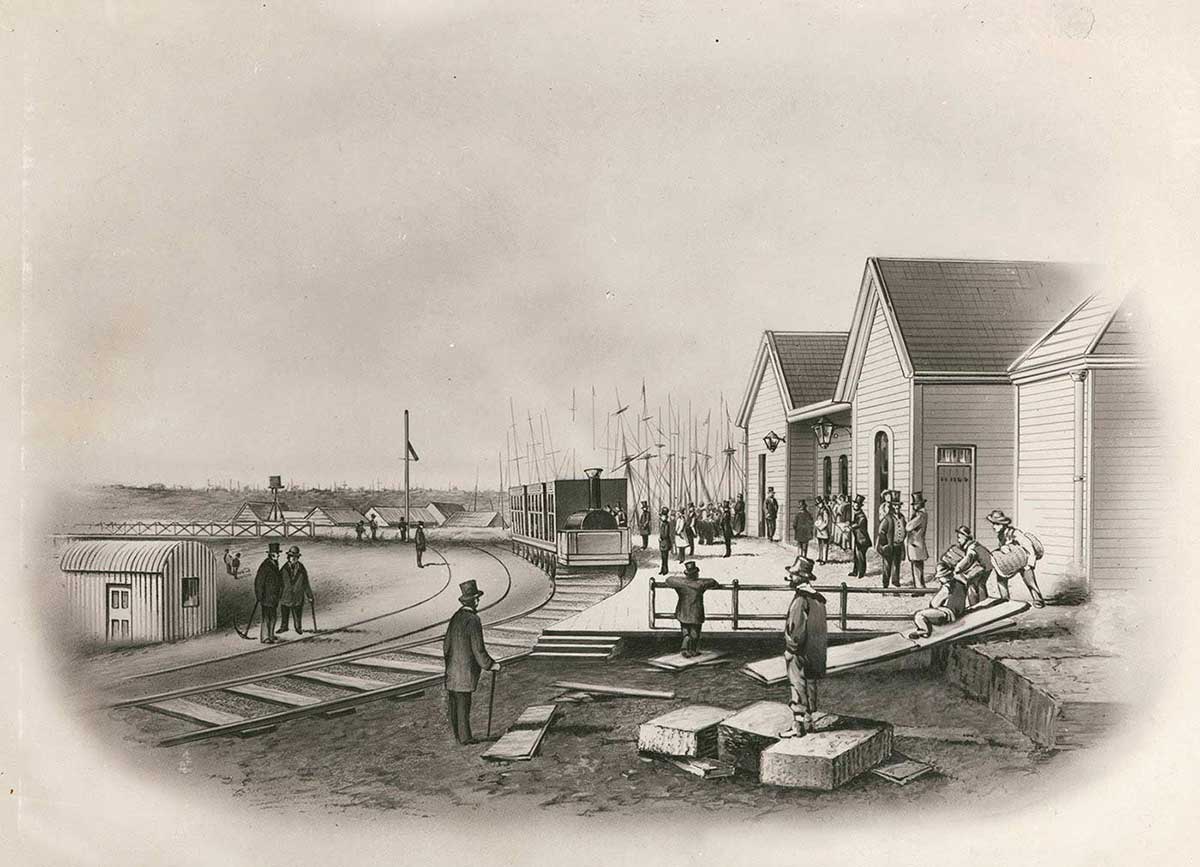 Photograph of an ST Gill drawing of Flinders Street in 1854

Built especially for the opening of the track, a steam engine made by Melbourne’s Robertson, Martin and Smith Engineering Works was the first to be produced in the Southern Hemisphere.

The line is still in use today, having been converted to light rail for Melbourne tram services.

Yesterday was memorable in the annals of Victoria and of Australia, for the opening of the first Australian railway … The first train on the new railway started at twenty minutes past twelve, amid the music of the band and the cheering and waving of hats of the innumerable spectators. 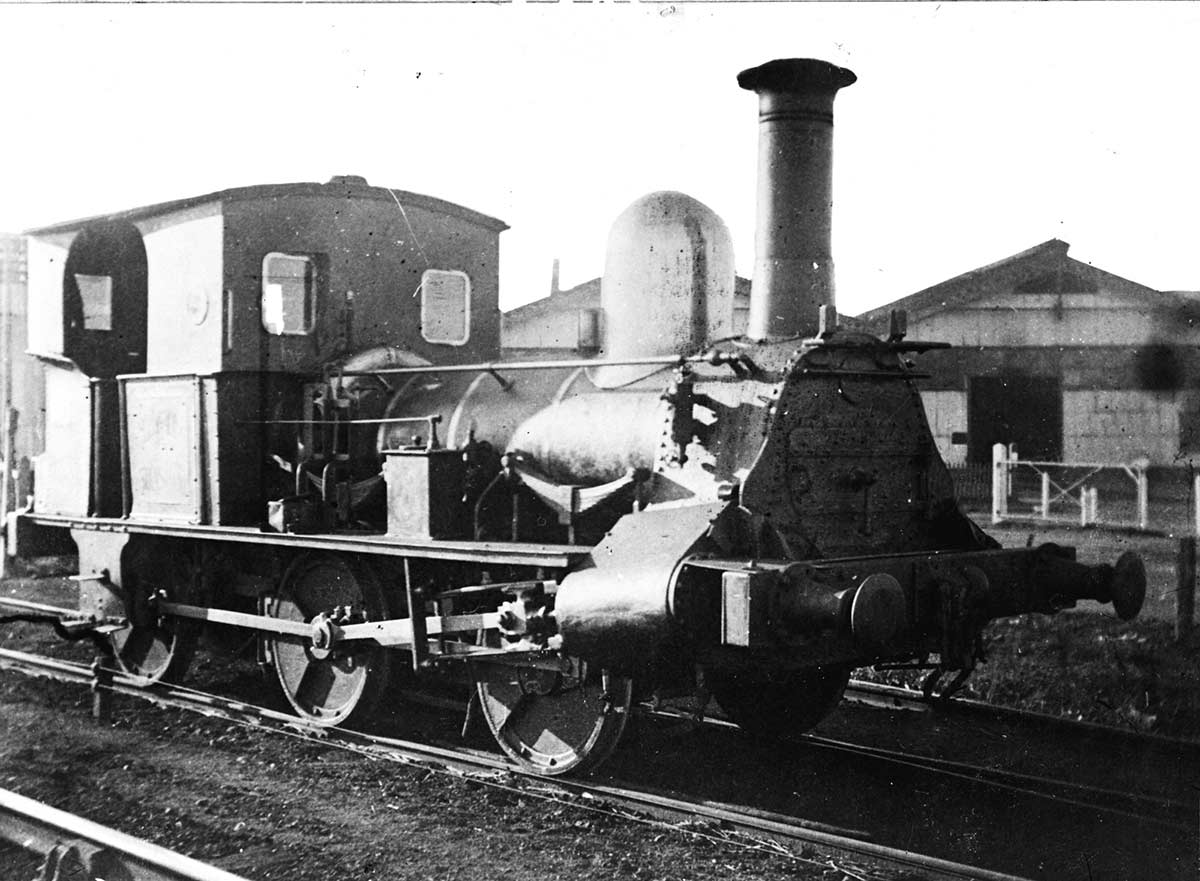 The opening of Australia's first steam rail line was founded at a public meeting convened by Melbourne’s mayor in 1853, with shares initially costing £50. The company was formed specifically to build a rail line between Flinders Street Station and Sandridge to ease the problem of moving people and goods between the port and the city.

Construction of the line began in the same year, with work progressing rapidly on both the stations and the track.

The line’s original engineer and designer, Englishman William Snell Chauncy, was forced to resign in March 1854 after producing substandard work on the railway pier at Sandridge. He was replaced by another Englishman, James Moore, who completed the line in time for the 12 September opening.

The track itself was broad gauge (around 1600mm) and ran from Flinders Street Station to its terminal stop at Sandridge pier, crossing the Yarra River over the original Sandridge bridge.

Originally, steam engines for the service had been ordered from English manufacturers Robert Stephenson and Company. However, work on the line progressed so quickly that the trains were not ready in time for the opening.

Instead, Robertson, Martin and Smith Engineering Works of Melbourne was commissioned to build the first steam engine produced in the Southern Hemisphere.

The locomotive was rapidly manufactured in ten weeks for about £2700. The four English engines originally ordered (named Melbourne, Sandridge, Yarra and Victoria) were all in use by 1855.

The journey originally took about 10 minutes and two trains ran every half hour.

Opening of the line

The opening of Australia’s first rail line was an occasion of much pomp and circumstance, with hundreds of people attending the event. Crowds of people began arriving at Flinders Street Station hours before the 12pm scheduled departure.

About 300 people were issued with invitations to ride on the train and attend the celebratory banquet held in the engine shed in Sandridge. The banquet is noted to have been ‘a very handsome one’ with many well-known Melburnians in attendance, including the mayor and the Lieutenant-Governor of Victoria, Sir Charles Hotham.

In 1878 this company was taken over by the Victorian Government, becoming part of Victorian Railways. The line from Flinders Street Station to Sandridge was in use until the late 20th century when it was modified to service the Melbourne tram network.

In the decade immediately after the Flinders Street to Sandridge line opened, many other rail companies emerged that built lines in Melbourne and surrounds, running services around the city and into the booming goldfields.

However, it is interesting to note that, unlike the Melbourne and Hobson’s Bay Railway Company, many of these were financial disasters. Eventually, the Victorian Government acquired most of these privately owned rail lines, creating Victorian Railways and operating an ever-expanding service network across the state.

At around the same time, in other states, rail travel also proliferated as a more effective means of transport than horse-drawn vehicles, with Sydney only one year behind Melbourne in opening the first line in New South Wales.

Rail networks soon sprang up across the country. This allowed the freer movement of people and goods across the nation despite issues with track gauge conformity between states that were only resolved after federation.

This led to expanding settlement along major railways and encouraged economic growth in Australia. Not only was it easier to move resources across the country, but increased investment in rail transport created jobs and provided capital for investment in both city centres and newly established towns. 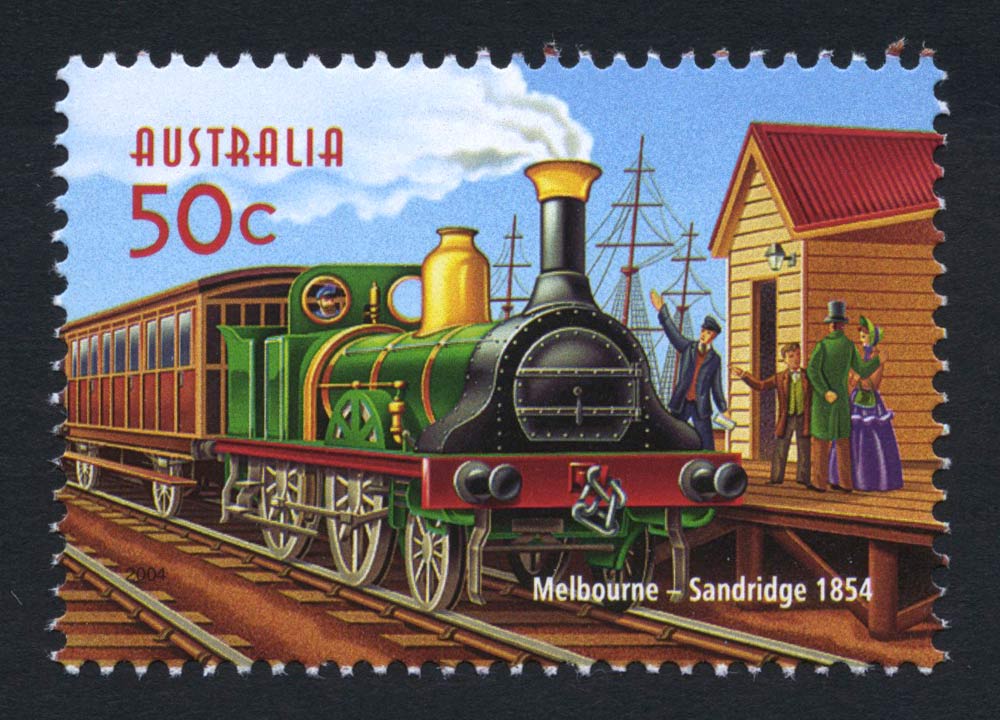 Although the Flinders Street to Sandridge line was the first steam railway in Australia, the Goolwa to Pt. Elliot railway in South Australia was the first passenger line in the country when it opened on 1 May 1854, however it was a horse-drawn service.

Railway pendulum wall clockPendulum wall clock consisting of various components including a clock dial, a wooden box that houses the clock mechanism, four wooden pegs, a brass pendulum and a clock key. The clock dial has a hinged glass cover with a brass rim and a circular wooden frame, and black Roman numerals on an off-white background. "J.M. Wendt Adel...

Article in the Argus, Trove, National Library of Australia

Monthly ticket on the Museum Victoria