Balarinji is a leading Australian design company, established by John and Ros Moriarty in 1983. Balarinji has received commissions from government, corporate and celebrity clients across the globe.

The company's distinctive Indigenous designs have appeared on objects ranging from posters to Qantas planes.

Balarinji is part of the Indigenous art and communications company, Jumbana Group. Jumbana was the Aboriginal name given to John Moriarty at birth into the Yanyuwa community at Borroloola in the Northern Territory.

Inspiration for the founding of Balarinji Design followed the birth of the Moriarty’s first child, Tim. In 1983, John drew turtle designs and Ros printed them on Tim's doona cover. From this initial collaboration came Balarinji, which is also Tim’s skin name from the Yanyuwa people.

From its early textile designs, Balarinji has expanded and diversified into building brand strategies and corporate identities. At the heart of the business is a philosophy of ‘the spirituality behind the design’. As John says, ‘This is something that all Australians … can relate to, so they can understand this country and feel more part of it’.

The National Museum of Australia purchased the Balarinji Art Collection of more than 300 gouache paintings from different design projects, and the Moriarty family gifted the accompanying Balarinji archive through the Cultural Gifts Program.

John Moriarty describes the inspiration for the founding of the Balarinji company in his autobiography, Saltwater Fella.

John had no design experience, but knew turtles very well from hunting them. After Ros transferred John's turtle drawing to Tim's doona cover, the designs continued. The Moriartys used their kitchen table as their first 'studio'.

They first established the company 'Jumbana', John's Aboriginal name given to him at birth, with Balarinji, Tim's skin name being later given to the design label of the company. They aimed to combine Aboriginal designs with Australian wool, cotton and silk, and to produce quality products. At the heart of the business is a philosophy of 'the spirituality behind the design'.

In her book, Listening to Country, Ros Moriarty gives additional insights into the challenges of establishing the design business. She juggled motherhood and John working at high level government appointments in Aboriginal affairs, while both worked late nights to progress Balarinji Design.

By the 1990s their dedication was starting to bring results. Budget Rent-a-Car commissioned uniform fabrics and Sheridan used Balarinji to create an 'Outback' collection of bed linen.

Balarinji designs were promoted in Japan and Europe, and the Moriartys started building on their successes. They began to move from the production of products for sale, to undertaking design commissions.

Their strong and innovative symbols were part of a new visual language which could be used to create brand and corporate identities for Australian and international businesses.

Qantas and the Dreaming series

In 1993 the Moriartys conceived the idea of painting a Qantas jumbo jet with their designs. They thought that this would be a very effective way of spreading their message about Indigenous culture across Australia and the world.

Their dream was realised in 1994 when Wunala (Kangaroo) Dreaming, the newest, state of the art 747-400 airliner in the Qantas fleet, was painted just like the model they had prepared. This was the world's largest moveable piece of Aboriginal art.

The model had been computerised and magnified a hundred times to produce two kilometres of tracing paper that was wrapped around the fuselage.

Painters and technicians at a Sydney's airport hangar 245 worked secretly and around the clock to paint the aircraft. Wunala Dreaming was rolled out on 4 September 1994.

As Ros describes, 'Kangaroos leapt across songlines and campsites that wrapped around the aircraft's belly in the way that we wanted their meaning to wrap around the nation'.

Balarinji continues to work with Qantas. Nalanji Dreaming was launched in 1995, and Yananyi Dreaming in 2002. In 2013 the fourth aircraft in Qantas' Indigenous Flying Art series was launched.

Balarinji worked with Qantas and the estate of West Australian artist Paddy Bedford to transfer the Mendoowoorrji design on to a new 737-800 aircraft.

Balarinji's best-known works are its series of Dreaming aircraft for Qantas, but the Studio has also designed for the Australian Ballet, the band U2, IBM, Renault France, Coca Cola Atlanta, Bank of America, British Airways, Mitsubishi and other international corporations and brands.

Balarinji's quest to promote a new sense of Australian identity has resulted in standout design collections of fashion, furnishings, accessories, gifts and homewares in Australia, Asia, Europe and the USA. The Studio's twenty-year retrospective showed at the Powerhouse Museum, Sydney in 2004, and then travelled to Osaka and Tokyo in Japan.

Balarinji designs have also signatured major national events and campaigns, including the inaugural Reconciliation Australia Sydney Harbour Bridge Walk and the poster commission for the opening of the Sydney Olympics Stadium. Balarinji also designed the Humanitarian Overseas Service Medal and Centenary Medal for the Australian Government.

Balarinji and the National Museum

The idea of gifting the Balarinji Art and Business and Design Archive collections to the National Museum of Australia was raised in 2008 by the Moriarty family. The Moriartys believed that they had reached a watershed moment with the archive, and needed to take a new direction.

The Balarinji archive mirrored design activities in a pre-digital age. After 25 years of operation, the studio had now become digital with all design work being carried out by computer, rather than by hand drawn and painted design processes.

It was time to draw together the artworks and the large body of associated archival material used in their creation, and ensure that this history of innovation in Australian design was recorded, preserved and made publically available.

The Balarinji art and design collection extends the Museum’s holdings of important Indigenous art and cultural artefacts. They help to balance the heavy bias towards 19th and early 20th century ethnographic objects that are unfortunately often without the personal stories of their makers.

The Balarinji Art collection consists of 316 individual art works, predominantly gouache on paper, created by the Balarinji design studio. The works were created by John and Ros Moriarty and various artists, both Indigenous and non-Indigenous, who were part of the Balarinji team.

Gouache is a type of watercolour paint modified to make it opaque or impenetrable to light. The ratio of paint to water is higher in gouache paintings and chalk or other inert white pigment is added to make the paint thicker. It is mostly used by commercial artists for posters, illustrations and other design work. Its quick coverage and total hiding power give it an advantage as a direct painting technique. 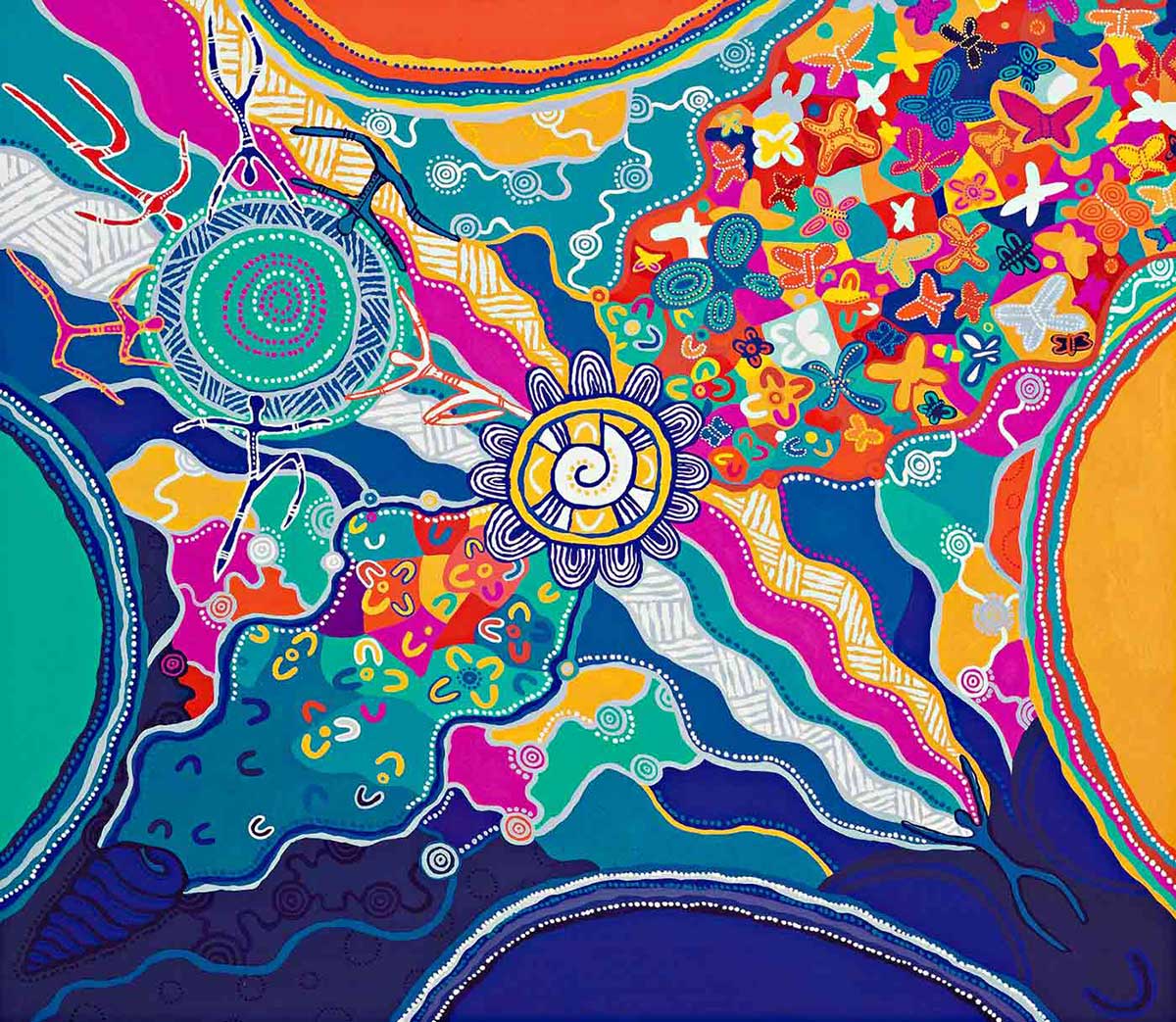 Joy of Sound by Balarinji

Most of the art works in the collection are finished art pieces, which could be framed for display purposes. Some show evidence of their working lives, of tape or tape marks, scuffing or the addition of pieces of collage, all part of the distinctive design processes that went into their final production and use for commercial applications.

In general these art works were not for display or exhibition, but for use as the central elegant pitch for a particular design project in the public and private sectors. The artworks in this collection form the prototypes of almost all of the designs used in the company's extended commercial applications.

The Balarinji Art collection was purchased by the National Museum of Australia in 2009.

This collection consists of business and licensing records, including the Balarinji Design Manual and records for all corporate and public art commissions, including plans and proposals, correspondence, work diaries, colour palettes, and other working drawings and design concepts.

The collection also includes three scale model aircraft from the Qantas Dreaming series, and finished designs such as sample uniforms, a large collection of fashion clothing and accessories, banners and posters, bags, home furnishings, stationery and souvenirs. Company discs, videos, photographs and press clippings from 1983 to 2008 are included.

The archival collection includes an estimated 30,000 plus individual items, sometimes catalogued at the group level and resulting in 1500 database records.

The material arrived at the National Museum in 2010, and has been receipted and catalogued over a three-year period by the registration and curatorial teams. Most of the work, apart from the copying of some audiovisual material, was finished in 2013.

The Balarinji Business and Design Archive collection was gifted to the National Museum of Australia through the Federal Government’s Cultural Gift Program, and was approved for donation in 2009.

Three JabirusA gouache painting on paper. The design features three Jabirus with colourful shapes and dots against a patterned background of dots, circles, and wavy and diagonal lines. The colours used are aqua, orange, purple, yellow, black and white. Handwritten on the back are the words 'JABIRU 3' and 'Balarinji'.