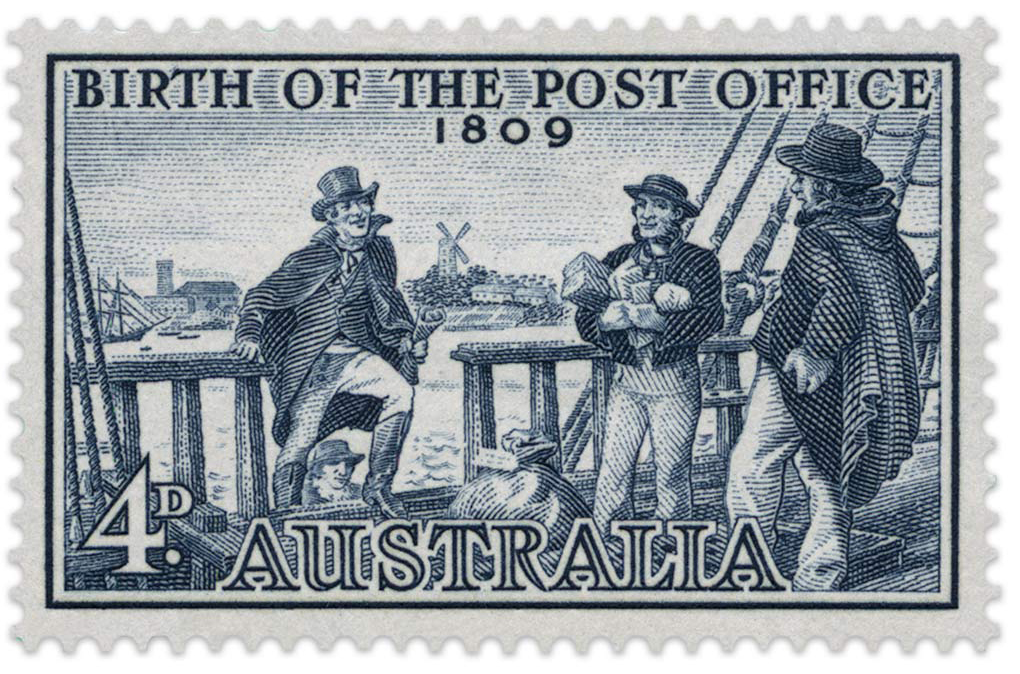 For the convicts, settlers and officials arriving in the early colony of New South Wales, letters were the only way to maintain a connection with Britain. Ships arriving in Sydney were mobbed by people looking for mail. Fraud, theft and extortion were rife.

On 25 April 1809 the government appointed Isaac Nichols to the position of Postmaster. Nichols, a former convict, took control of the distribution of mail within the colony and set up the first post office in his home.

Complaints having been made to the Lieutenant Governor, that numerous Frauds have been committed by Individuals repairing on board Ships, on their arrival at this Port, and personating others, by which they have obtained possession of Letters and Parcels to the great injury of those for whom they were intended.

In late January 1788 the First Fleet arrived in Botany Bay. For those establishing the colony, the sense of isolation would have been immense.

In June 1790 the Second Fleet sailed into Sydney Cove, bringing with it precious cargo: letters from home. In describing the arrival, Marine officer Watkin Tench wrote, '"Letters, letters!" was the cry. They were produced, and torn open in trembling agitation. News burst upon us like meridian splendour on a blind man.'

In Britain a centralised postal service was established in 1512. King Henry VIII knighted the first ‘Master of the Posts’ in 1516, a position responsible for establishing postal services in towns across Britain.

By the late 18th century the postal system was a public and unified service, with letters being delivered in mail coaches by staff in uniform.

The arrival and distribution of mail in the early years of the colony was chaotic.

The earliest recorded evidence of mail delivery appears in the Sydney Gazette on 10 July 1803. The announcement authorised boatmen travelling between Sydney and Parramatta to charge for the delivery of ‘Letters, exclusive of Government Service, each two pence’.

Like Britain at the time, there was no system of prepayment. The recipient of the letter was obliged to pay for its delivery. It was a haphazard process.

Sending a letter overseas required a mixture of luck and resolve. The sender would need to wait for a departing ship and entrust the letter with the ship’s captain. There were no guarantees that it would be delivered.

As the population of the colony grew, so did the volume of incoming mail. When ships arrived in Sydney Cove they were mobbed by people searching for letters and parcels.

By 1809 there were escalating complaints to the Lieutenant-Governor of fraud, theft and extortion at the docks. The New South Wales Corps, which had deposed Governor Bligh in 1808, moved to rein in the chaos by appointing an official postmaster.

On 25 April 1809 Nichols, an emancipated convict, was appointed as Postmaster, a position that authorised him to board ships and receive letters and parcels addressed to people within the colony.

He was ordered to establish an office at his home in George Street, where letters could be picked up and the collection prices would be fixed.

On 26 June 1809 Isaac Nichols boarded the brig Experiment and collected the first bag of mail from Britain. This is recognised as the birth of the postal system in Australia.

Isaac Nichols was born on 29 July 1770 at Calne, Wiltshire, England. At the age of 21 he was found guilty of stealing and sentenced to seven years transportation. Nichols arrived in Port Jackson on 16 October 1791.

Nichols was hardworking and possessed the rarest of convict qualities, sobriety. His honesty and diligence impressed Governor Hunter, who appointed Nichols as the Chief Overseer of convict gangs in Sydney.

In 1797 Nichols completed his sentence and Governor Hunter granted him 50 acres (20 hectares) of land in the Concord district.

The rise of Isaac Nichols was meteoric. In 10 years, he increased his land holdings to 1400 acres (566 hectares), opened an inn on George Street, established a shipyard and built the Governor Hunter, a 33-ton trading schooner.

By 1806 Nichols was one of the wealthiest businessmen in the colony. 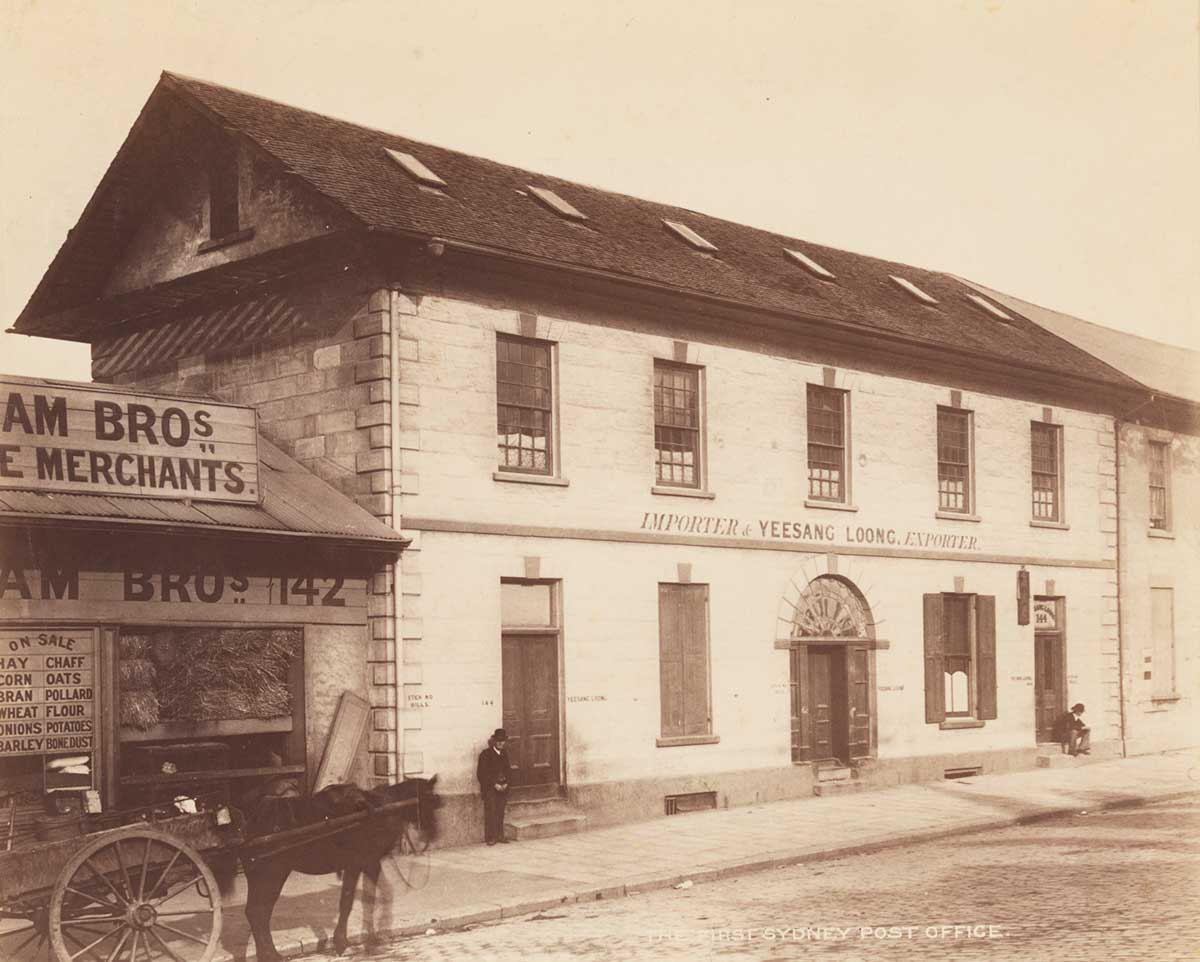 On 23 June 1810 Governor Macquarie ratified the appointment of Isaac Nichols as Postmaster and Nichols’s house became the first post office in the colony.

Around 1812 Nichols created a postmark that read ‘Sydney NSW’. Although undated, these postmarks are considered the precursors of the stamp in Australia.

As Postmaster, Nichols collected the incoming mail and published a list of people who had received mail in the Sydney Gazette. Nichols set the prices for collecting mail and kept the revenue as remuneration.

The cost of collecting mail was one shilling for a letter, and up to five shillings for a large parcel. Nichols hand-delivered mail to the most influential people in the colony.

The post office was run as a private business until 1825 when the New South Wales Legislative Council passed the first Postal Act. This transferred postal services to the Governor, who determined a postmaster’s wage and set the prices for mail collection.

The Postal Act also authorised the Governor to appoint postmasters outside of Sydney.

The first Postmaster was appointed in Van Diemen’s Land (Tasmania) in 1812, and mail was brought from Sydney in sealing and whaling ships.

Postmasters were appointed in the Swan River colony (Western Australia) in 1829, Victoria in 1836, South Australia in 1837 and Moreton Bay (Queensland) in 1842.

In 1828 the first postmen began direct delivery in Sydney. Outlying settlements were serviced by contractors on horseback or in coaches.

Each of the colonies operated their own postal service until they were united at Federation. From 1901, all postal services and telecommunications were operated by the Post Master General’s Department.

The postal system has expanded with the growing population and technological changes. From humble beginnings with an aspirational convict, Australia Post now delivers 2.6 billion letters per year.

Kelly Burke, The Stamp of Australia: The Story of our Mail – From Second Fleet to Twenty-first Century, Allen & Unwin, 2009.