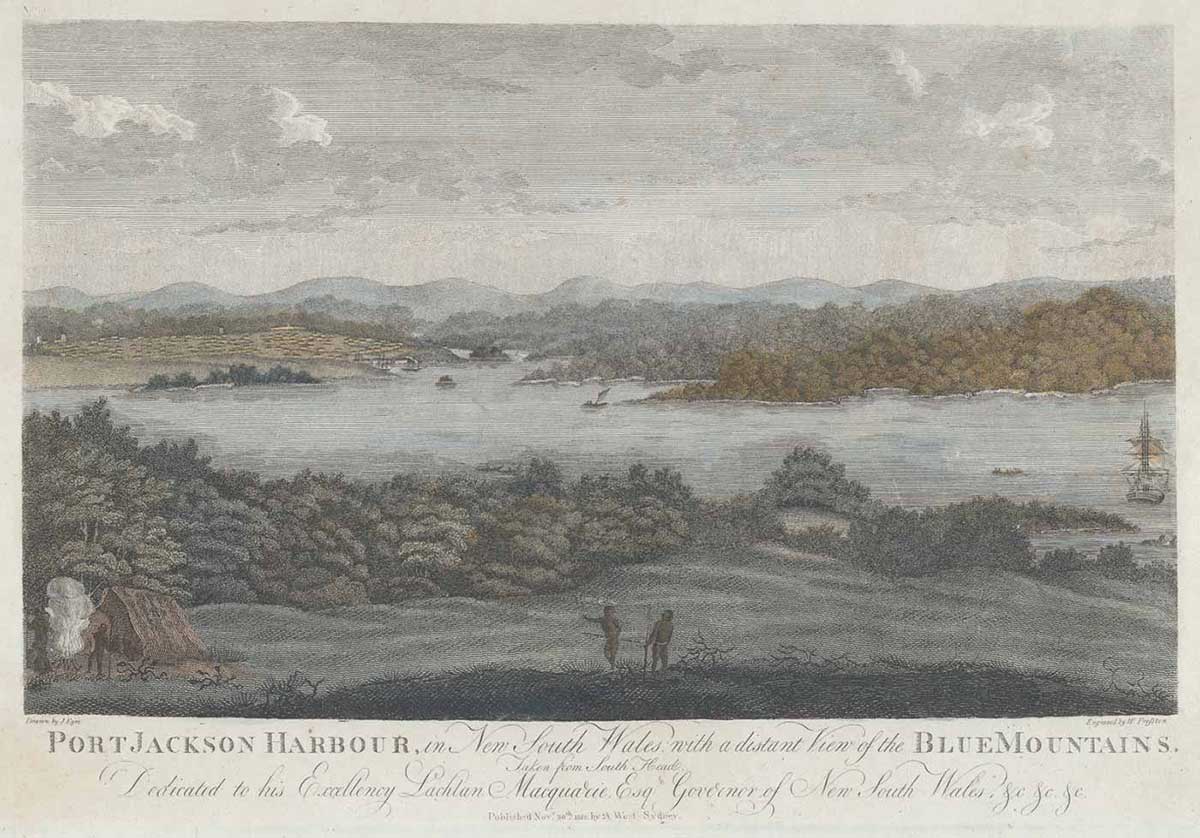 Port Jackson Harbour, in New South Wales: With a Distant View of the Blue Mountains. Taken from South Head by John Eyre

Captain Arthur Phillip RN was the commander of the First Fleet of 11 ships that sailed into Botany Bay, New South Wales, in January 1788.

Three days later he chose a site at nearby Sydney Cove, in Port Jackson, and on 26 January began to establish a convict settlement.

Phillip proved himself to be an enthusiastic and thorough leader who dealt in commonsense fashion with the challenges he faced in the early years of settlement.

Anxious to render a very essential service to my country by the establishment of a colony which, from its situation, must hereafter be a valuable acquisition to Great Britain, no perseverance will be wanting on my part, and which consideration alone would make amends for the being surrounded by the most infamous of mankind. Time will remove all difficulties. As to myself, I am satisfied to remain as long as my services are wanted; I am serving my country, and serving the cause of humanity.

In planning for the voyage, Phillip had displayed an awareness of the potential problems that might come with setting up a colony on the other side of the world.

As governor, he was responsible for nearly 1400 convicts, naval personnel and their dependants. He had complete authority over them, and the right to regulate nearly all aspects of their lives.

Phillip is generally regarded as an enlightened leader for his time, who tried to reform, as well as discipline, his convict charges.

He also sought to establish harmonious relations with the Eora people, the traditional owners of the land in the Sydney area. Local man Bennelong not only acted as an intermediary between Phillip and the Eora, but also seems to have enjoyed a genuine friendship with Phillip.

Phillip took Bennelong and another man, Yemmerrawannie, to London when he returned there in 1792.

From desperation to hope

The fledgling colony faced starvation as the lack of skilled farmers, spoilt seed, poor soils and unfamiliar climate saw the failure of the first crops. Phillip’s humane insistence that convict and free should share alike the reduction of their meagre rations was not universally popular; nor were his gifts of land to deserving convicts.

But both actions ensured the colony’s survival and initiated an egalitarian spirit still prized in Australia today.

Arthur Phillip joined the Royal Navy as a boy in 1751, and served with distinction in the British and Portuguese navies in the Atlantic and Indian oceans. He was appointed the first Governor of New South Wales on 12 October 1786.

Despite the misgivings of some, including the First Lord of the Admiralty, he possessed the ideal qualities for the position of colonial governor: he was accustomed to command, experienced in transporting convicts and familiar with the rudiments of farming.

At Sydney Town, Phillip proved himself to be an enthusiastic and thorough leader who dealt in commonsense fashion with the challenges he faced in the early years of settlement.

Ill-health forced Phillip’s return to England in 1792. He was prevented from returning to Sydney, as he had wished to do, by his illness, and resigned his commission in 1793.

Later, having recovered his health, Phillip returned to the Navy and served in the Napoleonic wars, attaining the rank of admiral. He died at the age of 75 on 31 August 1814.

In July 2014 a plaque was laid in Westminster Abbey to mark the bicentenary of Phillip’s death. 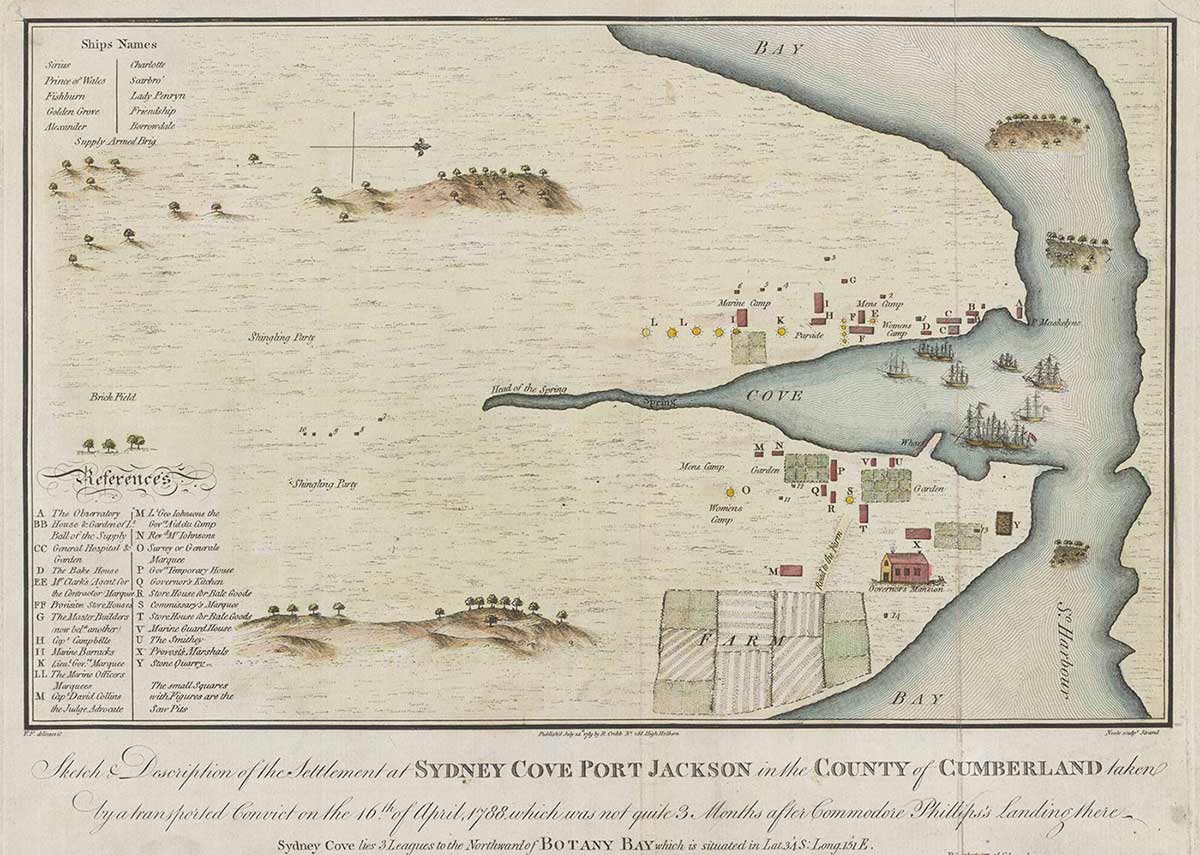 Sketch & Description of the Settlement at Sydney Cove, Port Jackson by Francis Fowkes

The arrival of the First Fleet changed forever the lives of Australia’s first peoples – the Aboriginal and Torres Strait Islander peoples. British settlement brought with it violent conflict, displacement and exile, and devastating diseases such as smallpox and tuberculosis.

Phillip took seriously his orders to maintain friendly relations with the Eora, and sought to avoid confrontation. However, within a few years of the fleet’s arrival relations were deteriorating. Phillip himself was speared during a meeting with Eora at Manly in 1790.

Later that year, in December, the warrior Pemulwuy killed Phillip’s gamekeeper, a man with a brutal reputation. Phillip retaliated by ordering punitive expeditions against Pemulwuy and others.

From 1792 Pemulwuy resisted the settlement of his country by leading raids on stations and military camps near the Parramatta, Hawkesbury and Georges rivers. In response, settlers were effectively authorised to shoot Aboriginal people on sight.

Pemulwuy had a number of close escapes, including being shot and severely injured by a party of settlers in 1797, before he was killed on about 1 June 1802.

In April 1788, almost three months after the First Fleet arrived in Sydney Cove, convict Francis Fowkes produced an annotated sketch map of the colony (above). It shows the settlement developing around the Cove and what became known as the Tank Stream.

The map identifies Governor Phillip’s residence and the government farm, which lay to the east of the Tank Stream (at the bottom of the map). The military encampment was on the western side while most of the convict tents were pitched to the north of this in the area later known as The Rocks.

Hopes for a prosperous future

Phillip sent a sample of Sydney clay to Sir Joseph Banks in 1788. Banks passed it to Josiah Wedgwood who made it into commemorative medallions. The design of the medallion, and a poem it inspired by Erasmus Darwin, express an optimistic belief in the colony’s future.

Convict love token 1792This love token is typical of tokens made by convicts from coins that they hammered flat and engraved with messages of affection and endurance. Convicts who were about to be transported to Australia gave the tokens as mementos to the loved ones they were leaving behind. Some tokens include the length of sentence, either seven or...