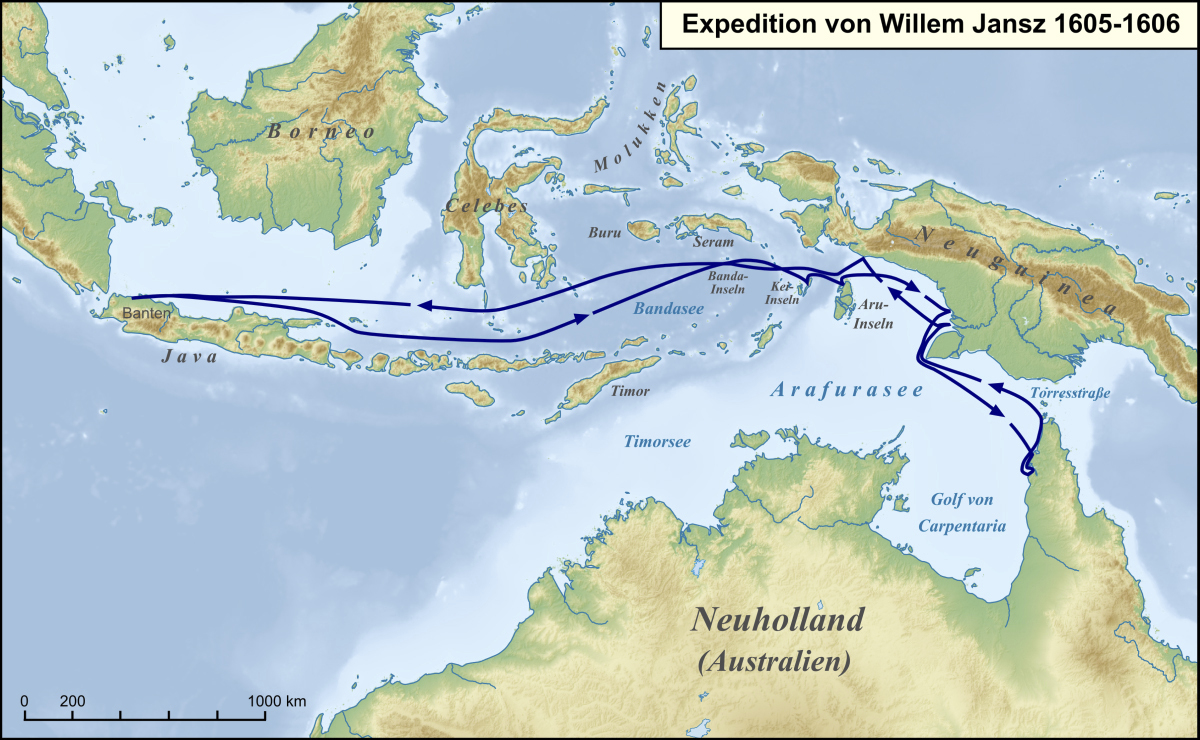 In late February and early March 1606 Willem Janszoon, captain of the Dutch East India Company ship the Duyfken, became the first European to make recorded contact with and map part of the Australian continent.

After sailing about 197 nautical miles down the west coast of Cape York, the Duyfken returned to the port of Banda in present-day Indonesia after a clash with the Wik Indigenous people led to the death of about nine crew members.

The eighteenth, heere departed a small pinnasse of the Flemmings, for the discovery of the Island called Nova ginnea, which, as it is said, affordeth great store of Gold.

During the 16th and early 17th centuries, European competition for control of trade in Asia was fierce. Until the late 1500s, the Portuguese dominated trade in South-East Asia with the help of Spanish and other international interests.

However, in 1568, 17 of the northern Dutch provinces went to war with the Spanish. This led to instability between the Portuguese and the Dutch and, after 1590 while Portugal was briefly controlled by the Spanish, Portuguese traders were forced to close their ports to Dutch merchants.

To undermine the Spanish and find a way to make independent trade profits, Dutch traders began to compete with the Portuguese, sending private fleets of vessels to the ‘East Indies’ (now Indonesia) to forcibly take over Portuguese settlements, create new Dutch ports and trade with local people.

Established in 1602, the Dutch East India Company (or VOC) served to coordinate the activities of the northern Dutch shipping companies in the East Indies. Competition between private ventures had nearly caused the collapse of Dutch trade in the region and the VOC served as a regulating body.

The company was an official representative of the Dutch Government and had the power to broker trade deals, administer ports, form its own armies and declare war with other countries over resources.

After strategic victories over Portuguese and English traders, the VOC became the dominant force in the region between the Cape of Good Hope and the East Indies, exporting goods such as tea, coffee, spices, porcelain and precious metals to Europe until 1799.

Willem Janszoon and the Duyfken

As part of a private fleet before the formation of the VOC, the yacht Duyfken (‘little dove’) first sailed to the East Indies in April 1601, under the command of Admiral Wolfert Harmensz.

The ship took part in a battle against the Portuguese and Spanish, and sailed to the island of Ceram to undertake reconnaissance, before returning to the Netherlands filled with valuable spices in February 1603.

Later that year, the VOC purchased the Duyfken and the yacht set sail for the East Indies in December as part of a fleet of 12 ships. This fleet was the first to be fully equipped and controlled by the VOC.

Captained by Willem Janszoon, a mariner from Amsterdam, the Duyfken completed a number of different assignments around the East Indies between 1603 and 1605, including running mail and supplies between ports.

In November 1605 the VOC sent Janzsoon and the Duyfken on an exploratory mission to ‘Nova Guinea’, which was assumed to be close to (or perhaps even part of) the great-unknown southern landmass.

Their goal was to search for land and resources (especially gold) that could be exploited by the company.

While the voyage is mentioned in a number of contemporary and later VOC documents, official ship’s logs detailing the exact route taken by the Duyfken to ‘Nova Guinea’ no longer exist.

However, contemporary entries in the diary of English East Indian Company Captain John Saris do show that by June 1606 the Duyfken had returned to the East Indies:

The fifteenth of June 1606 have arrived Nockhoda Tingall … told me that the Flemmings Pinnasse which went upon discovery for Nova Ginny, was returned to Banda, having found the iland: but in sending their men on shoare to intreate of Trade, there were nine of them killed … so they were constrained to returne, finding no good to be done there.

In 1933 the ‘Duyfken Chart’ was discovered in a library in Vienna. This map is an extremely accurate charting of the west coast of Cape York created by the crew of the Duyfken. While it is the first known map of any part of Australia, it is likely that the crew had presumed that the land they charted was a continuation of the coast of ‘Nova Guinea’, not an entirely new continent or the great south land.

The map shows where the crew made landfall along the coast, and where they decided to turn around and return to Banda after some of them were killed in a skirmish with the Wik people. The conflict arose because the Duyfken’s crew were trying to abduct members of the tribe.

The exploratory voyage of the Duyfken was considered unsuccessful by the VOC as no peaceful trade relationships were established with local populations and no easily exploitable resources were found. The VOC saw no reason to continue to take an interest in the area.

During the early 1600s a number of other VOC ships, like the Eendracht captained by Dirk Hartog, had accidental contact with Australia.

Any assessments made of the potential value of the continent were similar to the report of the Duyfken, and early Dutch exploration and mapping of Australia continued mainly as a way to mitigate the risk posed by Australia as a vast shipping hazard.

After its 1606 journey the Duyfken remained in the East Indies running supplies and transporting goods between ports for the VOC. In late 1607, the ship was beached on Ternate Island in the Moluccas to investigate leaks. Deemed to be beyond repair, it was abandoned.

In 1993 the Duyfken 1606 Replica Foundation charity was established in Western Australia. The organisation raised $3.7 million to build a complete replica of the Duyfken to ‘tell the little known story of Australia’s first recorded European visitors and to counter [the historical myth] that Dirk Hartog was the first European to step ashore in Australia …’.

Completed in 1999 the ship has not only recreated the voyage of the original Duyfken but also sailed to Texel (which used to be a major VOC port) in the Netherlands. The vessel is currently anchored in Perth where the public can take tours or go sailing on the ship as a way to re-live an important part of Australia’s maritime history.

TD Mutch, The First Discovery of Australia: With an account of the Voyage of the Duyfken and the Career of Captain Willem Jansz, Sydney, 1942