1616: Dutch navigator Dirk Hartog lands on the island off Western Australia that now bears his name 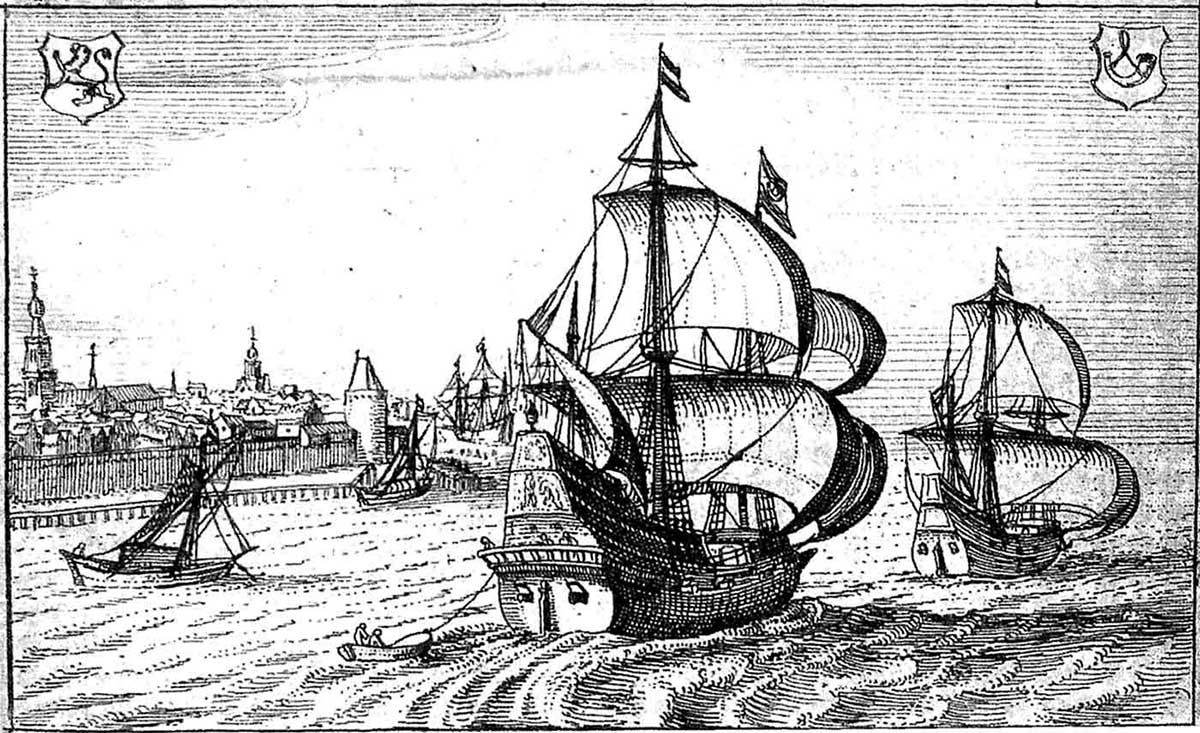 The Eendracht and the Hoorn leaving the port of Hoorn, Netherlands

On 25 October 1616 Dirk Hartog became the first European to set foot on the shores of Western Australia, and only the second to record encountering the Australian continent.

Landing on a rugged offshore island (now known as Dirk Hartog Island), he left a pewter plate describing his ship’s arrival and voyage.

Dirk Hartog was a successful Dutch private shipping merchant commissioned by the Vereenigde Oost-Indische Compagnie (VOC or the Dutch East India Company) as a ship’s captain.

The VOC was established in 1602 to coordinate the activities of Dutch shipping companies in the East Indies (now Indonesia). The company was an official representative of the Dutch government and had the power to broker trade deals, administer ports, form its own armies and declare war with other countries over resources in the region.

The VOC became the dominant force between the Cape of Good Hope and the East Indies. It sent goods such as tea, coffee, spices, porcelain and precious metals from the East Indies and India to Europe until the company folded in 1799.

In 1606 another VOC captain, Willem Janszoon, had become the first European to map part of the Australian continent. Janszoon had sailed along the eastern coastline of the Gulf of Carpentaria and mapped the area as far as Cape Keerweer.

In 1616 Hartog was appointed captain of a newly built VOC ship, the Eendracht (‘Unity’). Departing on its maiden voyage from the Dutch port of Texel on 23 January, the ship was bound for the East Indies with a fleet of other VOC trading vessels.

Separated from the fleet by an Atlantic storm, the Eendracht reached the Cape of Good Hope alone. Hartog continued towards the East Indies using the ‘roaring forties’.

This route, pioneered in 1609 by Hendrik Brouwer (another VOC Captain), used the prevailing westerly winds between latitudes 40 and 50 degrees south to increase sailing speed, nearly halving the journey time from Holland to the East Indies.

In the 17th century there were no instruments to determine longitude, so deciding when to turn north towards the East Indies port of Batavia was an educated guess.

It often depended on sighting the Saint-Paul or Amsterdam islands, located about half way between the Cape of Good Hope and the west coast of Australia, but these were easily missed.

Because he did not accurately judge how far east the Eendracht had sailed, on 25 October 1616 Hartog found himself just off the western coast of Australia.

He soon landed on a rugged and uninhabited island (now called Dirk Hartog Island), and so became the first European to set foot on the shores of Western Australia, and only the second to officially record encountering the Australian continent.

Hartog stayed to explore the island for about three days. He and his crew found the island unsuitable for prolonged settlement or VOC investment, though they made note of a vast mainland in the distance to the east.

To record their visit to the new land, Hartog had a pewter dinner plate flattened and inscribed with details of their landing and further journey plans. This plate was nailed to a post and placed on high ground at the northern end of the island, a spot now known as Cape Inscription.

Leaving the island on 27 October, Hartog sailed north up the coast of Western Australia towards Batavia. Naming the continent Eendrachtsland in honour of his ship, Hartog used the voyage to create the earliest nautical maps of Australia's western coastline.

On 14 December the Eendracht reached the East Indies before returning to Holland nearly two years later. Hartog left the VOC but remained a skipper within European waters. He died in 1621.

Dirk Hartog’s plate remained undisturbed on the island for 81 years after his landing.

In 1697 another VOC captain, Willem de Vlamingh, came ashore and found the marker half buried in sand. Removing the degraded plate, de Vlamingh created a new one, copying Hartog’s inscription then adding the details of his own visit to the island.

De Vlamingh returned to the Netherlands with the Hartog plate, the oldest European artefact recovered from Australian shores. It is now held by the Rijksmuseum in Amsterdam.

In 1801 a French expedition led by Nicolas Baudin landed on the Island. The de Vlamingh plate was located by the young cartographer, Louis de Freycinet, who bought it back to the corvette Naturaliste. Captain of the Naturaliste, Jacques Hamelin, ordered de Freycinet to return the plate considering it poor form to remove it.

In 1818 de Freycinet returned, this time in charge of his own ship, and took the de Vlamingh plate back to France. The plate was misplaced until the 1940s when it was relocated and, after the Second World War, was gifted to the Australian people by the French government. The plate is now on display in the Maritime Museum in Fremantle, Western Australia.

Many other explorers also spent time in the area around Dirk Hartog Island after its namesake’s visit. In 1699 Englishman William Dampier arrived at the island during his voyage to explore and map the coasts of ‘New Holland’.

Naming the surrounding area Shark Bay because of the large number of sharks spotted, he spent a week in the region mapping the coast and collecting plant specimens.

In 1772 Frenchman Francois de Saint Aloüarn arrived at the island and delegated to a junior officer, Jean Mengaud, the task of claiming the western half of ‘New Holland’ for King Louis XV. Mengaud performed a ceremony, burying two bottles sealed with lead and French coins at Turtle Bay on the island. It was not until 1998 that the coins and lead seals as well as one bottle were recovered.

Fifty years after de Saint Aloüarn buried his bottles, Phillip Parker King, the English captain of the Bathurst, also made his mark on the island, inscribing his initials and the year 1822 on one of the remaining posts.

After more than a century of private settlement and sheep farming, much of Dirk Hartog Island has now become a national park. Some privately owned tourism businesses still operate there, offering accommodation, fishing charters, eco cruises and 4WD tours.

The island is also part of the Shark Bay World Heritage Site, acknowledging its special place in the history of European interaction with the Australian continent.