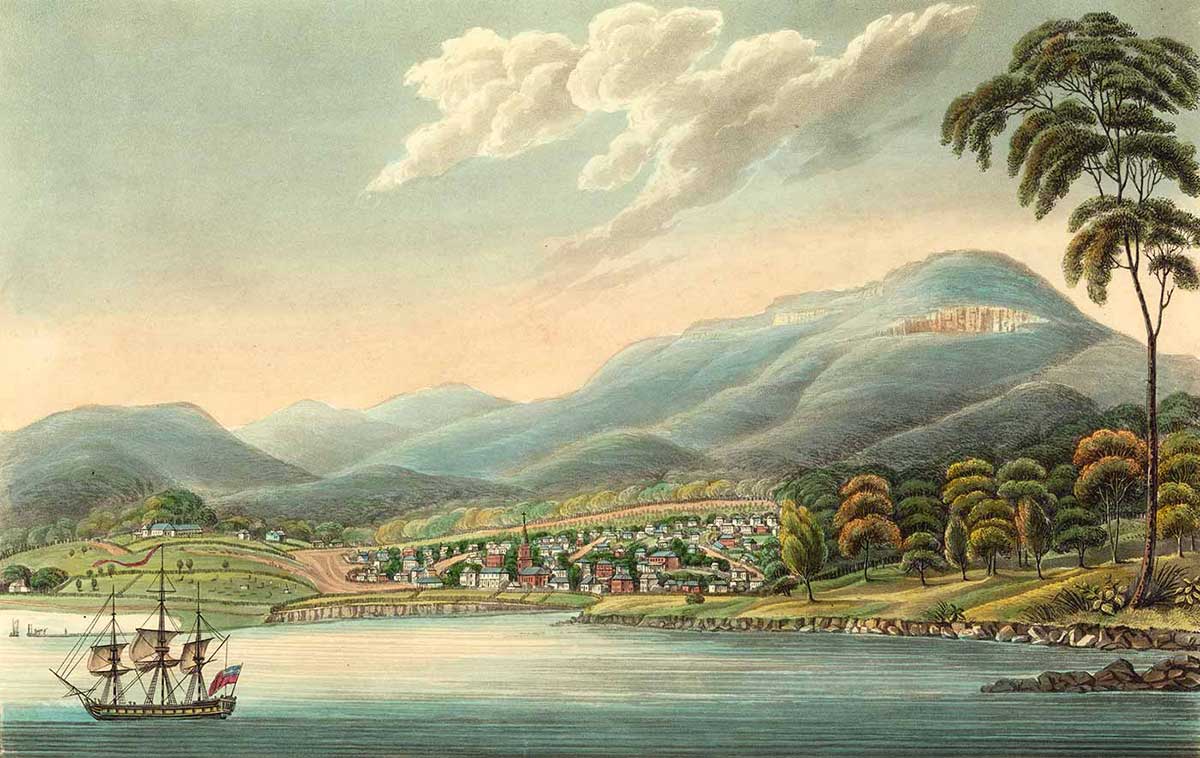 On 4 June 1824 Andrew Bent printed and distributed the Hobart Town Gazette without the approval of the censor. This was the first time a newspaper had been published in Australia without government authorisation.

Bent continued to publish his uncensored paper and received permission to do so from the New South Wales Governor. However, the Van Diemen’s Land administration tried to close his newspaper and charged him with libel on four different occasions, even going so far as to imprison him.

The hour that gives existence in a British Colony to a Free Press, requires not the aid of our feeble pen to extol its worth, or magnify its importance. That hour is pregnant with the embrio virtues of countless worthies yet unborn. And those who love light rather than darkness, must worship it as the dawn of mental glory.

In the early days of the colony there was no such thing as a ‘free press’.

All newspapers were censored by the government because, as Governor Darling later argued, censorship of the press was necessary because newspapers could foment dissent within the convict population and endanger the safety of the colony.

In London in October 1810 Andrew Bent was convicted of burglary and sentenced to death. However, his sentence was commuted to transportation for life and in January 1812 he arrived in Sydney.

On 1 June 1816 Bent became the printer of the Hobart Town Gazette and Southern Reporter. The newspaper was under the control and censorship of the government. When Lieutenant Governor William Sorell arrived in Hobart in 1817 he took a personal interest in vetting the newspaper.

In 1821 Governor Macquarie granted Bent a full pardon and within two years he was able to build new printing premises and a substantial home in Elizabeth Street.

In 1823 free settler Henry Emmett was appointed by Sorell as the clerk responsible for censoring the paper. He received the title ‘editor’ and a yearly wage of £100 which was administered by Bent. Sorell allowed Bent to buy the government printing presses with a government loan.

In 1824 the amicable arrangement between Bent, Emmett and the government came to an end. In May 1824 with the opening of the new Supreme Court of Van Diemen’s Land, Bent wished to publish full reports of the court proceedings. However, Bent did not have time and Emmett had no desire.

Bent needed a full-time reporter and editor. Evan Henry Thomas, who claimed to have an education in ‘stenography and Classics’, had recently arrived in Hobart. Educated individuals were at a premium in the colony and Bent wanted to hire Thomas immediately. He needed Emmett’s salary to do this.

Emmett was, not surprisingly, averse to giving up his wage and a terse exchange of written and verbal correspondence took place between the printer and editor that destroyed their relationship.

May 1824 also marked the arrival in Van Diemen’s Land of the new Lieutenant Governor George Arthur.

Arthur’s approach to the administration of Van Diemen’s Land was markedly different to Sorell’s, with management focusing on law and order over economic development.

Arthur had been instructed by the colonial office to create the most efficient and terrifying convict system possible, and while free settlement would continue the wants and needs of the colonists would be a secondary consideration.

To implement this system, Arthur needed the press to be tightly controlled.

On 4 June 1824 the dispute between the government censor and the private newspaper publisher led to Bent printing and distributing edition number 422 of the Hobart Town Gazette without the approval of Emmett. This was the first uncensored newspaper published in Australia.

As Emmett wrote later to the Lieutenant Governor, he had ‘no doubt the proofs [had been] purposefully withheld’. Emmett made a complaint to Arthur who decided Bent was overstepping the accepted boundaries for ex-convicts.

Former lieutenant governor Sorell became involved and advised Bent to resume working with the government censor, but Bent continued to publish uncensored newspapers and Arthur started proceedings to take over the press.

The Gazette was now legally free of censorship but Bent had gone over Arthur’s head to appeal his case and had created powerful enemies.

Meanwhile, on 14 October 1824, the first edition of Robert Howe’s Australian, the first uncensored newspaper on the mainland was published in Sydney.

Bent and the future of the free press

Bent began publishing letters and commentary from unidentified sources attributed to ‘A Colonist’, which became increasingly strident in their criticism of the government.

Arthur wrote to the secretary of state for the colonies, the Earl of Bathurst in London, expressing ‘great perplexity’ at finding the ‘Official Gazette of the Island converted into a powerful engine against the government’.

On 1 August 1825 Bent was charged with libel, sentenced to six months imprisonment and fined £518. Arthur went further and the government printed its own newspaper using exactly the same title and edition number as Bent’s publication.

Bent lost all his government printing contracts but continued to publish newspapers. He was again prosecuted for libel in 1828, 1830 and 1836.

Bent and his family left Tasmania in 1839. They moved to Sydney and published a paper, Bent’s News and New South Wales Advertiser as a weekly for nine months until March 1840.

In 1841 they moved to the Macleay River where Bent became a cedar merchant and hotelier. Tragically, his hotel burned down, then his entire cedar stock was washed away in a flood, and he had a fall that incapacitated him for six months.

Bankrupted, Andrew Bent moved into the Sydney Benevolent Society Asylum and died there on 26 August 1851.