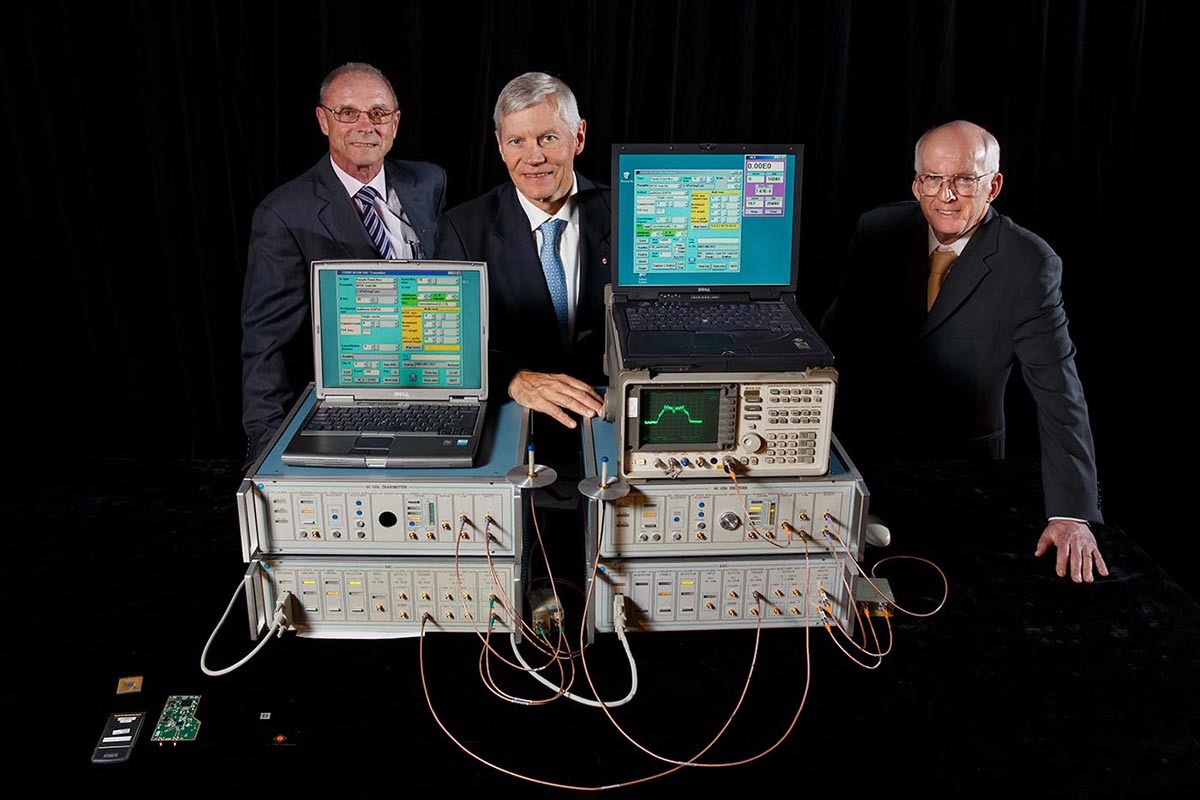 The work of CSIRO scientists lies at the heart of wireless networks now in use around the globe.

CSIRO’s groundbreaking work in radioastronomy, involving detailed knowledge of the structure and behaviour of radio waves, led to a successful solution to the problem of how to move large quantities of data around indoor environments.

By 2012 CSIRO had licences with 23 companies which had generated a revenue in excess of $430 million.

From the citation of the European Inventor Awards 2012 presented to the CSIRO team:

[This] invention made the wireless LAN as fast and powerful as the cabled solutions of the time, and is the basis for the wireless networking technology (wi-fi) now used in billions of devices worldwide. O’Sullivan and his team thus ushered in the age of high-speed, always-on wireless connectivity we enjoy today.

The history of wireless local area networks (WLAN) stretches back more than a century to the work of Guglielmo Marconi, the Italian inventor who began experimenting with radio waves in 1894. WLAN uses long radio waves, which Marconi discovered could carry complex signals.

In the First World War, both sides used radio technology. In the Second World War the military was able to encrypt radio transmissions by transferring messages rapidly between frequencies. This was called spread-spectrum technology and was crucial to the later development of WLAN.

In the 1930s the American physicist Karl Jansky discovered that the universe emits radio waves. He built an antenna capable of receiving those signals, and radio astronomy was born.

John O’Sullivan was a young Australian electrical engineer working in radio astronomy in the Netherlands during the 1970s. One of his tasks was to analyse hundreds of cosmic radio signal recordings.

O’Sullivan was frustrated with the monotony of the work. ‘I guess I’m inherently lazy,’ he has since said, ‘but I was starting to think … there must be a better way of doing this’. So he invented what would become one of the keys to cracking wireless communication – a Fast Fourier Transform (FFT) computer chip.

The Fourier Transform (FT) is a mathematical equation that transforms one form of communication to another. It has the capacity to break radio waves down into their constituent frequencies and reassemble them.

The FFT chip could perform thousands of these operations (and so the fast) almost simultaneously and therefore rapidly interpret the radio signals. 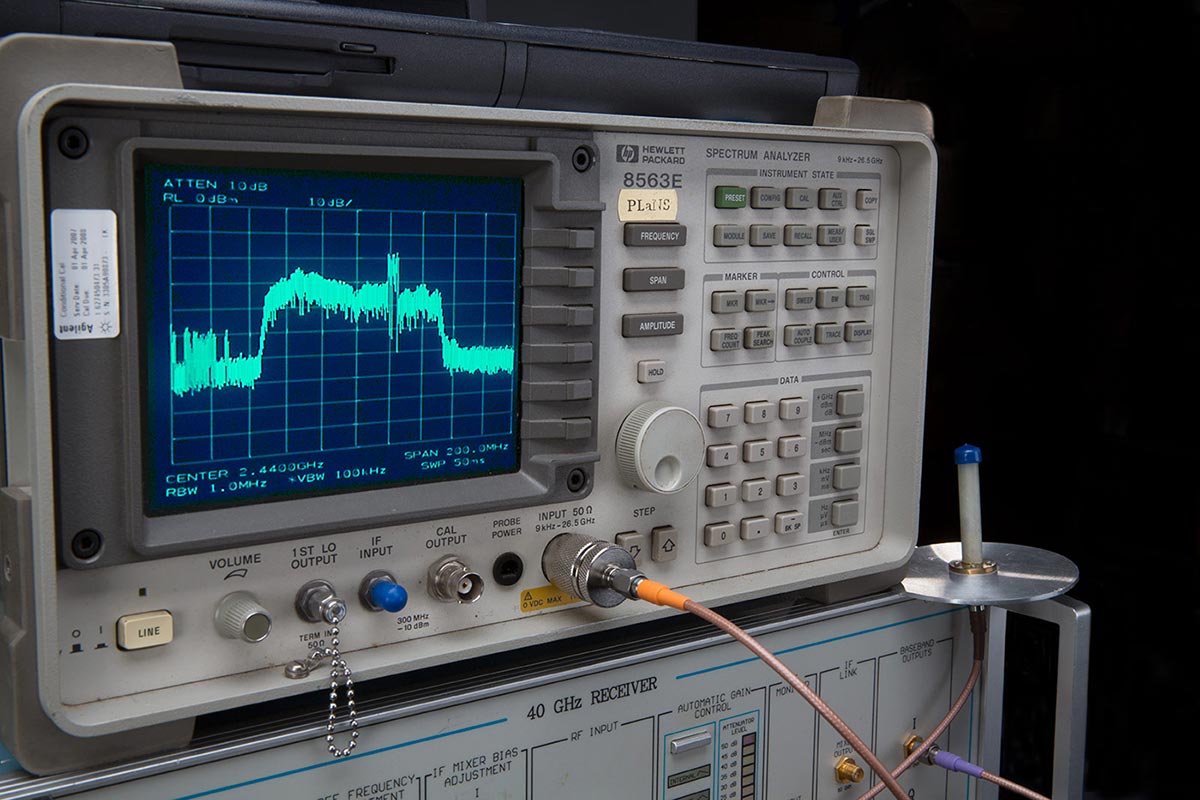 In 1983 O’Sullivan returned to Australia to work with the Commonwealth Scientific and Industrial Research Organisation (CSIRO) on the receiving systems for the new Australia Telescope in Narrabri, NSW.

It was a time of diminishing research budgets and O’Sullivan’s Signals Processing Group (SPG) was charged with finding industrial applications for the technologies they were developing.

Their research led to commercial applications in ultrasonic proximity detection for coal mine safety, ultrasound processing and CT scanning.

One of the underlying connections between these technologies was the Fourier Transform equation. It was able to interpret the signals used in each application.

In the mid-1980s O’Sullivan worked with Austek Microsystems, an Adelaide-based computer chip manufacturer, to create the first commercial chip developed around his original FFT chip. These chips had many applications in astronomy and medical imaging, and held records for processing speeds for many years.

The Signals Processing Group had a goal of earning 30 per cent of their funding from these commercial activities but this was proving difficult and O’Sullivan believed they needed to focus their attention on one major investigation with worldwide impact.

The decision to solve the WLAN problem was a bold one. Portable computing was just taking off and contemporary processing speeds were so slow that there could be no immediate commercial application.

Ambitiously, the team set their target data transfer rate at 100 megabits per second (Mbps), the same rate as the best optical fibre networks at the time. Existing wireless networks were transmitting at only between one and two Mbps.

This wildly optimistic target proved crucial because it forced the project to be framed in a completely different way. The team could not just upcycle standard technology; they had to approach the issue from a multitude of different angles.

The primary difficulty with short-range wireless transmission was how radio waves bounce off almost any surface and arrive at their destination at different times. Like echoing sound waves, these delays led to the break up and distortion of waves. This is referred to as multiple path propagation.

To transfer large quantities of data wirelessly the data needs to be separated into small portions and transmitted on multiple radio frequencies simultaneously, and then reassembled in the right order by the receiver.

The key to this deconstruction and reconstruction was the Fourier Transform equation that O’Sullivan had worked on in the 1970s. As with the stripping down and reassembling of cosmic radio waves, that same process could be applied to low power radio waves.

In 1992 the first Australian WLAN patent was filed for, the US patent was filed for in 1993 and approved in 1996. This led to the creation of prototypes and the founding of Radiata Inc by Dave Skellern and Neil Weste from Macquarie University. They took out a non-exclusive patent on the technology from CSIRO in 1997.

In September 2000 Radiata demonstrated a chip compliant with the new IEEE 802.11a wi-fi standard at the Networld-Interop conference in Atlanta. On the strength of this demonstration Cisco Systems bought the company for $567 million.

By 2002 the first unlicensed WLAN products had been released on the market and CSIRO began efforts to persuade those computer chip manufacturers to pay royalties. They had no success and in 2005 resorted to litigation.

The legal action evolved into a David versus Goliath scenario. Dell, Intel, Microsoft, Netgear, Hewlett-Packard and Apple all sued CSIRO to declare its patent invalid. Eventually CSIRO, a relatively small government research body, was up against 14 of the largest tech companies in the world.

In 2009 Hewlett-Packard was the first of the litigants to break ranks and sign an out-of-court agreement. Then, one by one, the other 13 companies followed suit, leading to a reported settlement for CSIRO of over $205 million.

Emboldened by the settlement, CSIRO went after the big mobile phone operators in the USA – Verizon Wireless, T-Mobile USA and AT&T – and came to another out-of-court settlement. By 2015 CSIRO had received over $450 million in settlements and over $150 million of that has been placed in trust for future research.

40 GHz Receiver unitThis receiver unit was used by CSIRO in the invention of the original Wireless Local Area Network (WLAN) prototype. It was developed with other components including a 40 GHZ transmitter unit, an analogue to digital converter, a digital to analogue converter, and a Fast Fourier transfer (FFT) chip. This unit was used to detect ...

Wi-fi prototype
Listen Wires, wi-fi and the future
From the vault – communications
Science and technology
Friends