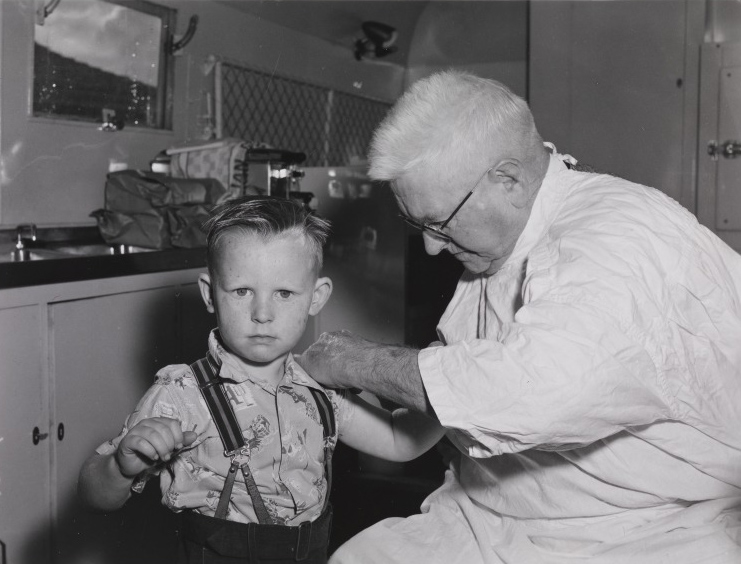 Doctor vaccinating a child for polio in a mobile clinic as part of an anti-polio campaign in Western Australia, July 1956

Polio was among the most frightening diseases to affect Australians during the 20th century.

The incurable and unpredictable viral disease mostly targeted children and could cause permanent paralysis, even death. It sometimes reached epidemic proportions across the world.

It wasn’t until the 1950s and 1960s that two Americans, Jonas Salk and Albert Sabin, separately developed effective vaccines.

Gillian Thomas, who caught polio as a baby in 1954:

They put me into a horrible-looking brace called a Thomas Brace where you just laid spreadeagled and they tied your legs and arms – all the bits that were paralysed in fact, all got tied in, because all of me except a bit of one arm was paralysed. I don't remember anything about it, because I was so young, but when I look at the picture now, I think what a horrible thing to do to a child. 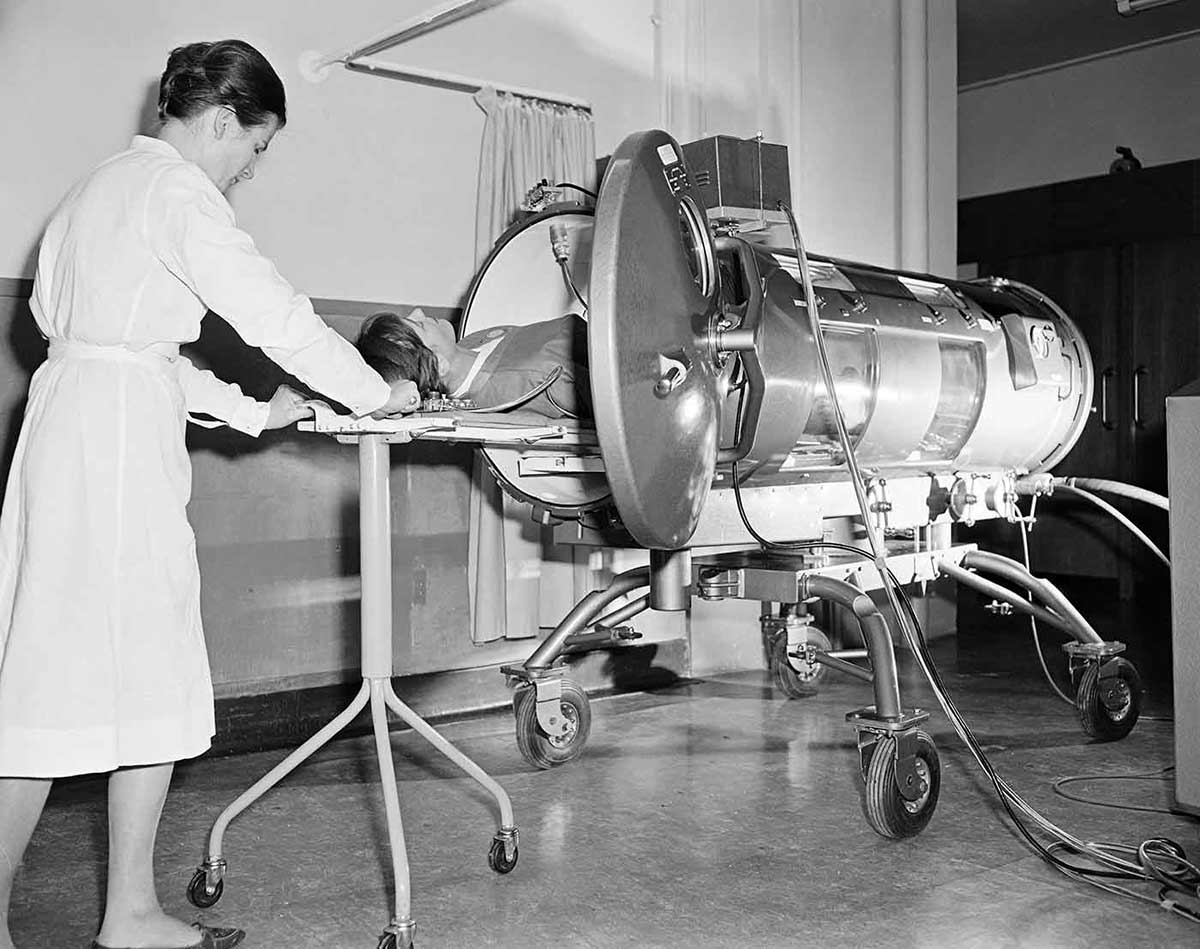 Poliomyelitis, or simply polio, is a sometimes fatal disease caused by a gastrointestinal virus that is spread through faeces and mucous, and ingested orally.

It is highly contagious, but in the majority of cases polio has either no effect at all or, at worst, no more than flu-like symptoms. However, in about one per cent of those infected the virus spreads to the nervous system, causing paralysis, usually of the legs. Of those affected in this way, five to 10 per cent die.

As most people infected with polio have no signs of illness, they remain unaware they have been infected. For several weeks they shed the virus in their faeces. During that time, polio can spread rapidly through a community. The disease may infect thousands of people, depending on the level of sanitation, before the first case of polio paralysis emerges.

Polio generally affects children. More than 50 per cent of cases are children under three years old. An additional cruelty of the disease is that about 40 per cent of patients who suffered paralytic polio in childhood can experience renewed paralysis as adults. This is called post-polio syndrome.

An Egyptian inscription from about 1400 BCE portraying a priest with a withered leg suggests polio is an ancient disease.

In 1789 British doctor Michael Underwood made the first clinical description of the polio. Fifty years later, German doctor Jacob von Heine conducted the first serious investigation of the disease and found it to be contagious.

The world’s first recorded polio epidemic took place in the United States in 1894. In 1908 Austrian doctors Karl Landsteiner and Erwin Popper discovered that polio was caused by a virus.

Polio was known in Australia by the late 1800s, but the worst epidemics took place in the 20th century. It became a notifiable disease in Tasmania in 1911 and in all remaining states by 1922. Between 1937 and 1938, 1,000 children contracted polio in Tasmania, second only to Iceland.

From 1944 to 1954 polio was responsible for more than 1,000 deaths in Australia. In America in the 1950s, polio killed or paralysed tens of thousands of people.

In the early 20th century, suffering from polio was considered shameful and was associated with dirt and poverty. It is contracted from water, food or objects that have been in contact with faeces or mucous of an infected person.

In Australia at this time, inadequate sanitation and poor understanding of disease transmission meant that anyone could catch it, but the urban poor, rural communities with poor sanitation and children who put things in their mouths were at greater risk.

Until the Whitlam government’s National Sewerage Program in the 1970s, hundreds of thousands of homes, poor and affluent alike, were not connected to sewers. This was despite the fact that by the 1950s, Australian governments knew that polio was faeces-borne.

Infected patients, usually children, were often isolated in infectious diseases wards for weeks during which time they were not allowed to see their parents. The standard treatment was to immobilise affected limbs by strapping them to braces.

Even when patients were considered safe to interact with their families, many months of painful rehabilitation could follow in an attempt to restore movement to nerve-damaged limbs. Patients who could leave hospital sometimes remained disabled for life.

In 1932 Queensland nurse Sister Elizabeth Kenny rejected immobilisation as a means of rehabilitation and began treating the physical effects of polio using warm compresses and massage.

Such was the popularity of her treatment that Sister Kenny clinics opened around Australia and in England. She also spent 11 years in the US where she was greatly lauded. Her treatment is considered the forerunner of modern physiotherapy.

But polio could also compromise a person’s ability to breathe by paralysing their diaphragm muscles. Large artificial respirators – the so-called ‘iron lungs’ – were built to accommodate the patient’s body up to their neck.

The frequently changing air pressure within the machine made it possible for air to flow in and out of the patient’s lungs when they were unable to breathe for themselves.

While the ‘iron lung’ saved lives, the experience of living in these enormous machines was, for children especially, a terrible ordeal. Many patients were respirator-dependent for months or years – a few remained dependent their whole lives.

In 2009 June Middleton died at the age of 83 in Melbourne. She was the world’s longest surviving polio patient in an iron lung, having spent 60 years in the device.

In 1955 Dr Jonas Salk and his research team at the University of Pittsburgh in the United States, developed the ﬁrst polio vaccine, which was administered by injection.

This was followed in 1961 by an oral vaccine developed by Dr Albert Sabin.

Debate raged over the benefits of the two kinds of vaccine. Salk’s vaccine, which used a killed virus, was easier and quicker to produce but required regular booster shots.

Sabin’s attenuated (weakened but still live) virus vaccine did not require booster shots but, if not manufactured properly, ran the risk of reverting to its virulent state and infecting the person with the full-blown disease. It also prevented the virus from replicating in the patient’s intestines and so stopped the ongoing transmission of the disease.

It is estimated that the Sabin and Salk vaccines together save an estimated 600,000 lives each year worldwide.

Dr Percival Bazeley of the Commonwealth Serum Laboratories (CSL) was sent to work with Salk in 1952 and returned to Melbourne in 1955 to begin manufacturing the dead-virus vaccine. The first Salk vaccines were distributed across Australia in June 1956 and 25 million doses of the vaccine were produced by CSL under Dr Bazeley’s directorship.

Many parents were enthusiastic about the vaccine but by no means all. By 1964, 83 per cent of New South Wales children were vaccinated, but only 72 per cent of children in Victoria.

These vaccination rates were not high enough. The eradication of a disease relies on ‘herd immunity’, which occurs when the vaccination of a significant portion of a population (or herd) provides protection for individuals who have not developed immunity. The lack of herd immunity contributed to another outbreak of polio in Australia in 1961 and 1962.

Sabin’s oral vaccine was first used in Australia in 1966.

In October 2000 the World Health Organization declared the Western Pacific region, which includes Australia, to be polio-free.

There are an estimated 400,000 polio survivors in Australia, many of whom still live with the long-term effects of the disease.

However, by the mid-1980s wild polio was still endemic in about 125 countries. Queensland accountant Sir Clem Renouf, who was then World President of Rotary International, decided to launch an eradication program, similar to that which had eliminated smallpox. In 1985 he persuaded Rotary clubs around the world to raise money to make this happen.

Having raised $247 million, Rotary began work in South America. The World Health Organization, realising that Rotary was meeting with success, joined forces with Rotary and other non-government organisations and launched the Global Polio Eradication Initiative in 1988.

Polio has now been eradicated in most countries, but as of 2017 remains endemic in Afghanistan, Nigeria and Pakistan. High immunisation levels remains crucial even in countries where polio has already been eliminated.

Hot-air steriliserThe absolute necessity for sterilising medical and surgical instruments in the laboratory to prevent the spread of infectious made the hot-air sterilisers, or hot-air ovens, important tools. A wide range of sterilisers were available during the early twentieth century as awareness of the importance of sterilisation increased. A...
On display

Centres for Disease Control and Prevention