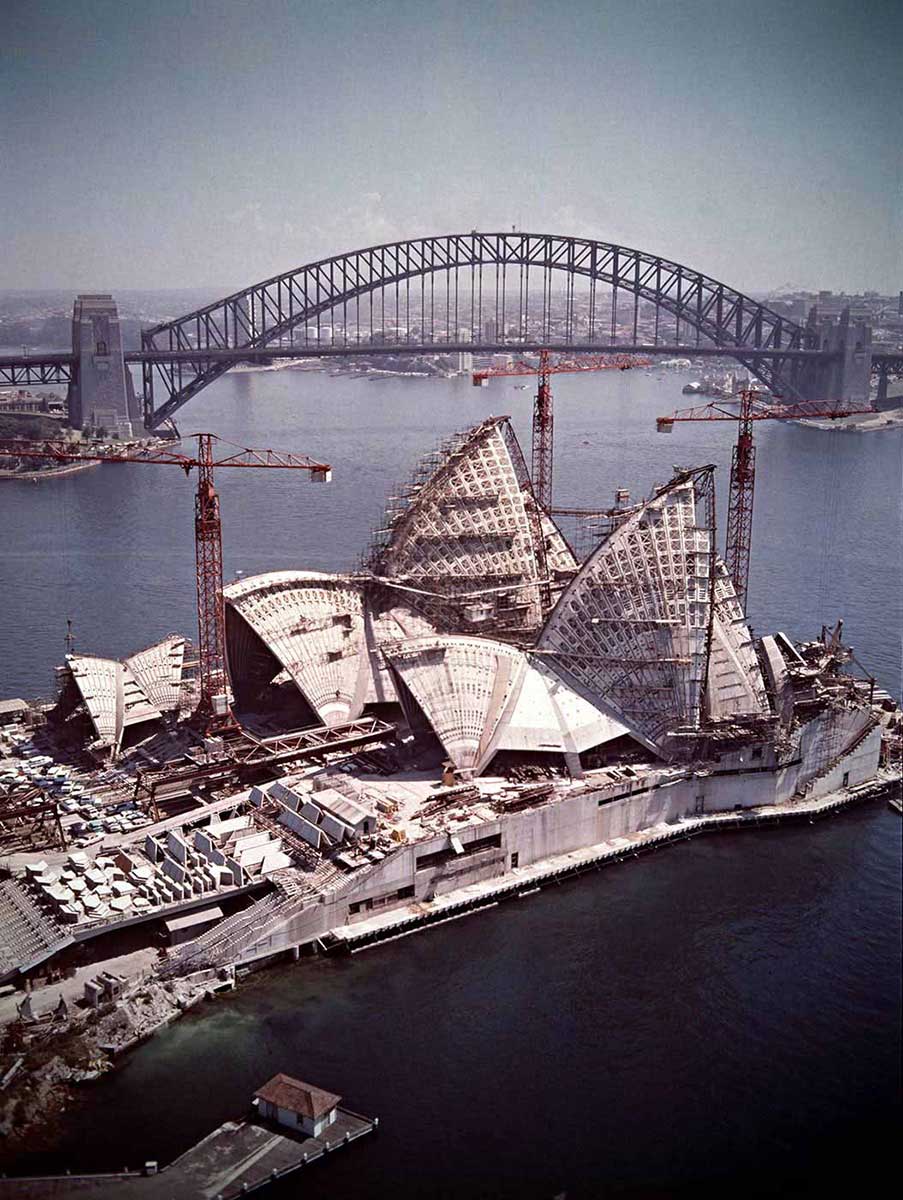 The Sydney Opera House is one of the 20th century’s most iconic buildings. It broke new ground for design and engineering around the world.

Since its opening in 1973 it has become a symbol the world immediately associates with Sydney and Australia.

The story of the Opera House is a drama that for more than 15 years grabbed national headlines and pitted the artistic vision of the architect Jørn Utzon against the politics and budgets of the New South Wales Government and the limits of architecture and construction.

Utzon made a building well ahead of its time, far ahead of available technology, and he persevered through extraordinary malicious criticism to a building that changed the image of an entire country. It is the first time in our lifetime that such an epic piece of architecture gained such universal presence. 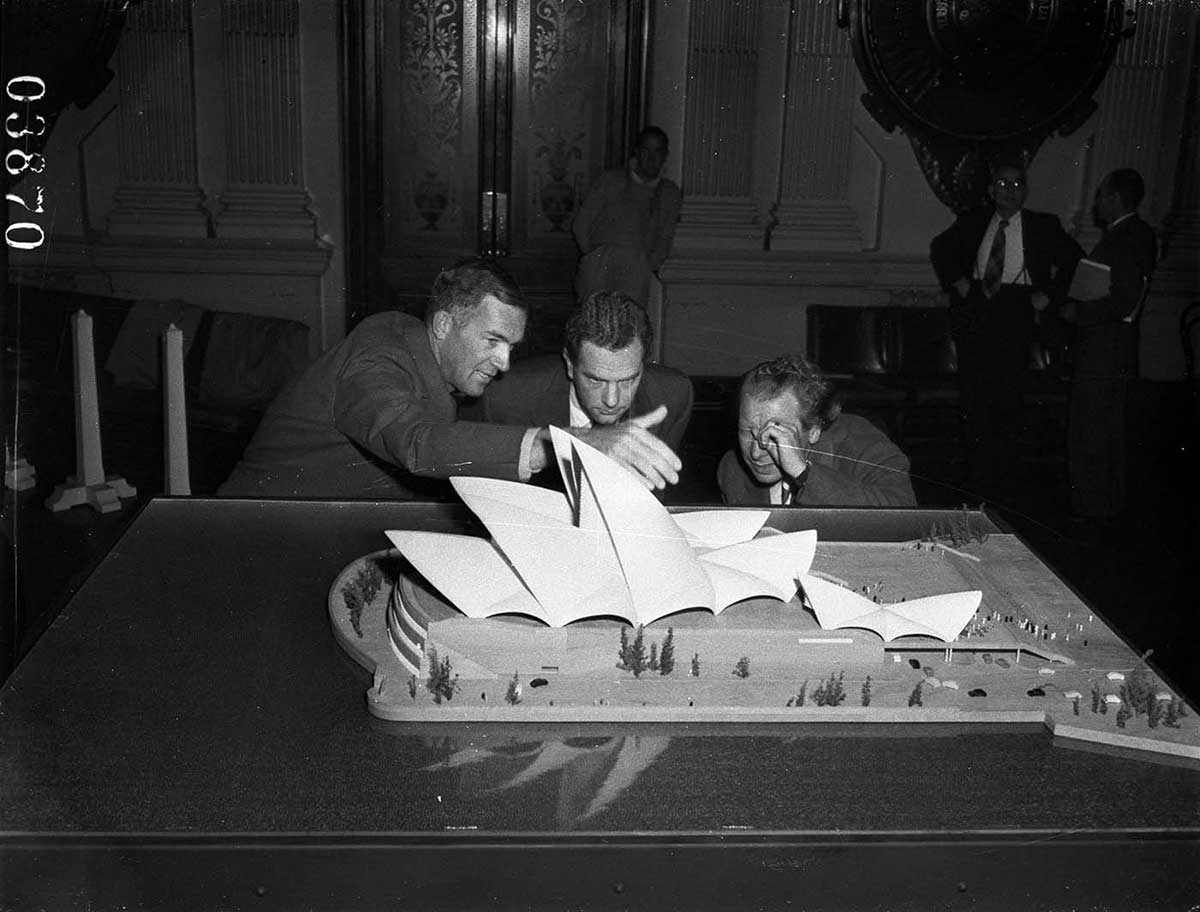 Sydney grew from 500,000 to 1.5 million people during the first half of the 20th century, but the city’s cultural life was thought to have lagged behind its population growth.

In 1947 the renowned British conductor Eugene Goossens was appointed to lead the Sydney Symphony Orchestra. A few years later, he publicly called for a world-class concert hall:

We must have an Opera house within five years. Sydney is taking its place among the world’s major symphonic groups. A fine hall is essential if the public is to hear the orchestra at its best.

In 1954 Goossens met with New South Wales Premier Joseph Cahill and the two agreed that Sydney needed a major performance venue. For 1950s Australia, it was a bold and far sighted decision.

A year later, the premier announced an international competition to design an opera house to be built at Bennelong Point, then occupied by a tram depot.

There is no record of the evaluation process but legend has it that the respected American architect Eero Saarinen arrived after the three other members of the judging panel had shortlisted designs. Saarinen was underwhelmed by their choices and looking through the rejected plans came across Jørn Utzon’s – design number 218.

Saarinen championed the entry and convinced the panel that this was the winning submission. In January 1957 Premier Cahill announced Utzon’s design as the winner and in July committed $7 million to the Opera House’s construction with a completion date of December 1963.

Utzon was a 38-year-old Danish architect who had worked with a number of famous Scandinavian designers and was particularly interested in organic architecture, a style that manipulated and evoked natural forms. He had won a series of architectural competitions in Denmark, but had yet to design a building outside his home country.

Utzon’s proposal was a striking series of nestled white roofs that appeared to float above a massive podium structure inspired by Mayan temples.

It fitted with Utzon’s belief that architecture should have a transcendent quality. As he said, 'The opera house should take people from their daily routine into a world of fantasy, a world they can share with the musicians and actors.' 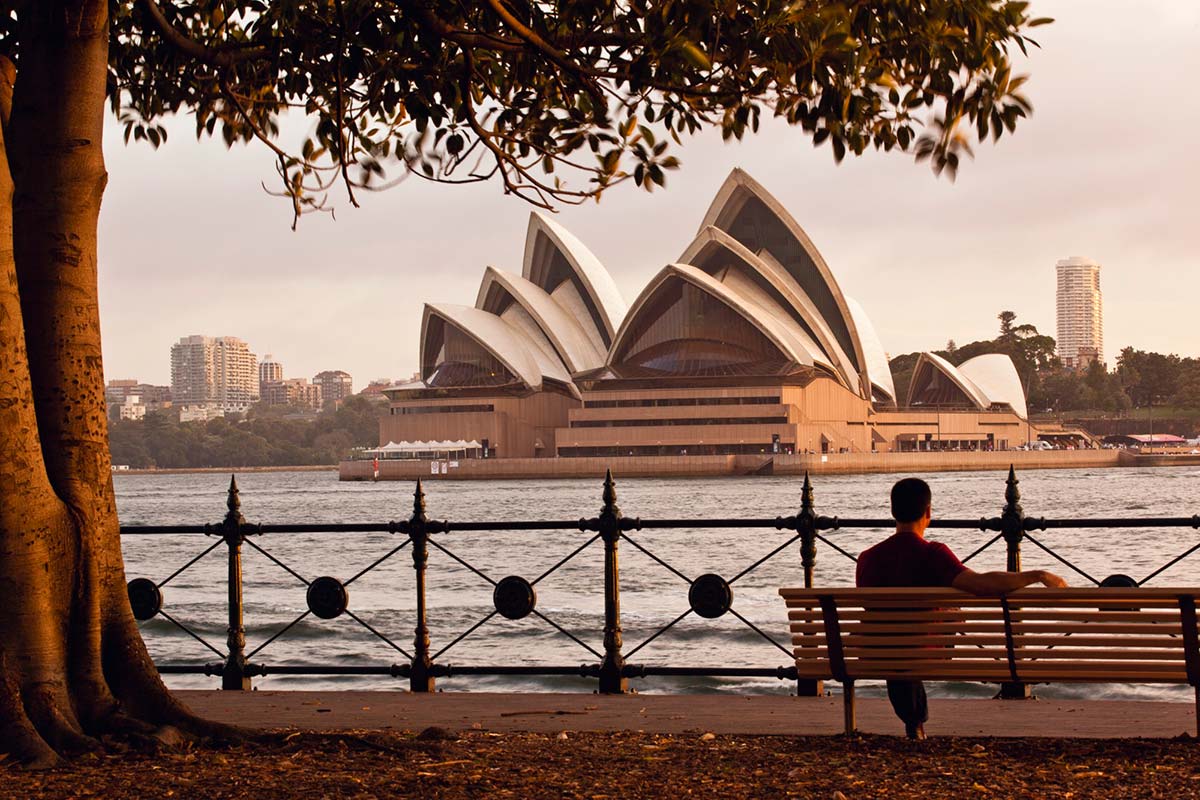 Utzon’s drawings had not been properly assessed by engineers before submission so over the next five years considerable assessment and remodellings went back and forth between Utzon, the consulting engineers Ove Arup and Partners and the Sydney Opera House Executive Committee.

The architecture was groundbreaking and the engineering to produce the gracefully floating roofs was at the edge of the possible. With each new design the cost increased and the completion date moved. In the words of Sir Ove Arup, constructing it was 'an adventure into the unknown'.

The shells were the most challenging aspect of the build. The Arup engineers had spent four years trying to create a roof design that was replicable between the 10 separate shells and could therefore be prefabricated on site.

Eventually Utzon came up with a deceptively simple answer: the curvature of each individual roof shell could be extracted from a single sphere. He demonstrated this by cutting four sail-like segments from the surface of an orange, each of which could be a different size and shape but all curving in precisely the same way.

This solution allowed ribs of varying size to be formed from sections cast in a common mould, then arranged to create the different size shells. This became known as the ‘spherical solution’ and eventually 2194 pre-cast concrete sections each weighing 15 tons were formed on site to create the flowing roofline people recognise today.

At about this time Utzon and his family moved to Australia. However, the projected budget had now reached $35 million, already five times the original estimate with a completion date of December 1965.

Eventually the mounting costs and delays became a public concern and a political issue. In the May 1965 state election, after 24 years in power, the Labor Party was defeated by theLiberal/Country Party coalition. The leader of the Country Party, Davis Hughes, became Minister for Public Works.

Hughes refused to accept what he considered was Utzon’s chaotic approach to managing the Opera House project and eventually cut off funding, so Utzon was unable to pay his own staff.

On 28 February 1966 Utzon met with the minister to discuss the $103,000 he was owed. Hughes would not release the funds and Utzon was forced to offer his resignation. The minister immediately accepted it.

Over the next few days there were protests on Sydney’s streets as architects, artists and unionists called for Utzon’s return. Attempts were made to broker an agreement between the architect and the government but to no avail and Utzon left Sydney with his family on 28 April never to return to the city or see his completed masterpiece.

In the wake of the resignation, the government appointed a new panel of experts under Ggvernment architect Ted Farmer to complete the Opera House. The project was now onto stage three, the interiors and crucial acoustic design.

In December 1966 the panel submitted a complete ‘Review of Program’ and in the process significantly altered Utzon’s interior designs. Again work proceeded slowly as the build pushed the envelope of engineering possibility.

Finally, the Sydney Opera House was opened by Queen Elizabeth II on 20 October 1973. It was 10 years overdue and, at $102 million, 14 times the original budget.

However, Australia was now home to one of the greatest buildings of the 20th century – an instantly recognisable piece of exhilarating architecture that remains a credit to this country and one with which Sydney and Australia are instantly associated.