1872: Completion of the Overland Telegraph from Darwin to Port Augusta, South Australia 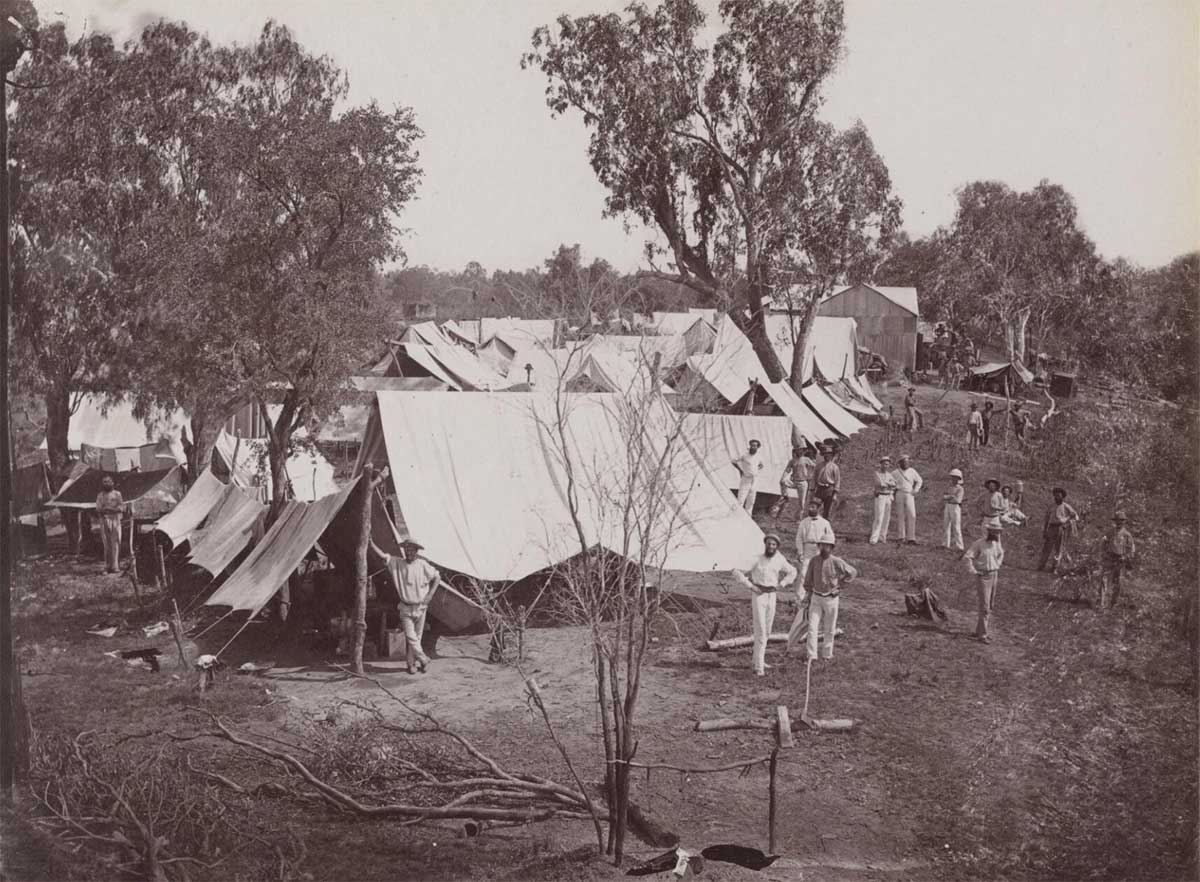 On 22 August 1872 the construction of the Overland Telegraph line between Adelaide and Darwin was completed. It has been described as ‘the greatest engineering feat carried out in nineteenth century Australia’.

Within months it was linked to the Java-to-Darwin submarine telegraph cable, and Australia’s communication time with Europe was reduced from months to hours. Australia’s isolation from the rest of the world was lessening.

We have this day, within two years, completed a line of communications two thousand miles long through the very centre of Australia, until a few years ago a terra incognita believed to be a desert.

In the early days of the colony of New South Wales communication with Britain, the place that many settlers considered their homeland, could take years. Ships carrying letters between England and Sydney took up to eight months one way and a reliable mail service was really only available to government officials.

Formal postal services began in 1809 with Lieutenant-Governor Foveaux’s appointment of Isaac Nichols as the first postmaster of the colony.

By the 1850s the pressure to reach the goldfields as quickly as possible brought new, more efficient ships into service on the Britain to Australia route. These clippers used the ‘Great Circle’ route that tracked far south of the Cape of Good Hope and rode the Roaring Forties winds to cut the travel time to Australia to two months.

These shorter voyages were a marked improvement, but communication turnaround time for the colony was still four months.

Electric telegraph technology developed simultaneously in Britain and the United States with the first patents registered in 1837.

The idea of communicating thousands of kilometres in mere minutes was revolutionary and proved immediately attractive the world over. By 1851 there were more than 50 companies operating telegraph lines across the USA.

Australia’s first telegraph line began operation between Melbourne and Williamstown in 1854. Within four years, Sydney, Melbourne and Adelaide were connected.

Laying underwater cables to create an intercontinental telegraph system was a major technical challenge. Different types of copper-core wires and waterproof coverings were experimented with from the 1840s.

In 1850 a successful cable covered in gutta-percha (a kind of latex) was laid across the English Channel to France. But it was not until 1865 that the first successful trans-Atlantic cable was established between Ireland and Newfoundland.

By 1870 there were telegraph cables linking England with places as far away as Japan and Java. The possibility of radically improving Australia’s connection with the rest of the world was now within reach.

For this improved connection to happen another major engineering challenge would have to be overcome – a telegraph line needed to be built between southern and northern Australia. In such a large, dry continent with so little communication infrastructure this was one of Australia’s greatest ever engineering undertakings.

As late as July 1861, with the loss of the Burke and Wills expedition, traversing the interior safely seemed impossible. However, after the John McDouall Stuart’s successful return crossing from Adelaide to the Arafura Sea in 1862 the idea of a trans-continental telegraph line was reinvigorated.

Individual Australian colonies recognised the economic benefits of hosting an overland telegraph line. Competition developed between South Australia and Queensland over where the line should run. However, South Australia was the only colony to control an entire north-to-south route, having acquired the Northern Territory in 1863 through the prompting of local pastoral interests and the George Waterhouse government.

South Australia took the first step by building a 300-kilometre line north from Adelaide to Port Augusta in 1870. It then entered into negotiations with the British Australian Telegraph Company, which was laying an underwater cable from Java to Darwin.

The company had already opened negotiations with Queensland on a route through their territory. To undercut these discussions, South Australia agreed to pay for the construction of a telegraph line between Port Augusta and Darwin. The contract stated the line would be built by 1 January 1872 with a budget of £128,000.

South Australia hoped that by being the first point of contact between Australia and the rest of the world would stimulate the colony’s business environment.

The management of the contract was taken over by South Australia’s Superintendent of Telegraphs, Charles Todd.

The northern and southern sections were to be built by private contractors while the South Australian Government would be responsible for the remote 1000-kilometre central section.

In July 1870 Todd appointed John Ross to lead the exploration party that would survey the route, linking waterholes and areas with sufficient supplies of timber for the telegraph poles. Ross generally followed Stuart’s trail, which was itself a traditional trade route created and travelled by Aboriginal people for millennia.

The southern and central sections were completed within the time stipulated but the northern section fell behind schedule after the wet season hit in November 1870. Todd concentrated his resources in the north, and the southern and northern lines were connected at Frews Ponds on 22 August 1872, only seven months behind schedule.

The line featured 36,000 telegraph poles and 11 repeater stations (necessary to boost the strength of the electrical signal), each about 200 kilometres apart. The Overland Telegraph cost £239,588, almost double the original budget.

Only months after the completion of the Overland Telegraph it was connected with the newly finished Java-to-Darwin submarine cable. Australia was now connected to the world. News that had taken months to reach England could now be transmitted within hours.

Sending a telegram was still prohibitively expensive with each word costing the equivalent of a day’s wage for a labourer. However, the service was an instant success transmitting over 4000 telegrams, mainly for business and government, in its first year of service.

Overland Telegraph as a Defining Moment

The Overland Telegraph changed the way Australia related to the world and the country’s extreme isolation was broken.

Newspapers printed sections by-lined ‘by Electric Telegraph’ and businesses clamoured for news from the European markets. Telegraph offices, especially in rural areas, became centres of trade where information and banking were transacted and orders placed.

The telegraph line also opened up the centre of the continent. Within a year of its construction gold was being mined around Pine Creek (near Katherine) and within 10 years the cattle industry had been established in the Northern Territory.

Prospectors and graziers used the repeater stations as centres from which to explore and stake claims on the land. Alice Springs, which was established as a repeater station, became the administrative hub for central Australia.

1871-72 Port Darwin to Java telegraph cableThe cable is a section of the 1871 Java to Port Darwin underwater telegraph cable, the first to connect Australia via Asia to Europe and England. The materials used to seal and protect the cable are consistent with those used at this time. The cable sample was recovered from the Timor Sea on 13 March 2016, at 11° 58.3'S / 126°00...

Peter Taylor, An End to the Silence: The Building of the Overland Telegraph Line from Adelaide to Darwin, Methuen, Sydney, 1980.