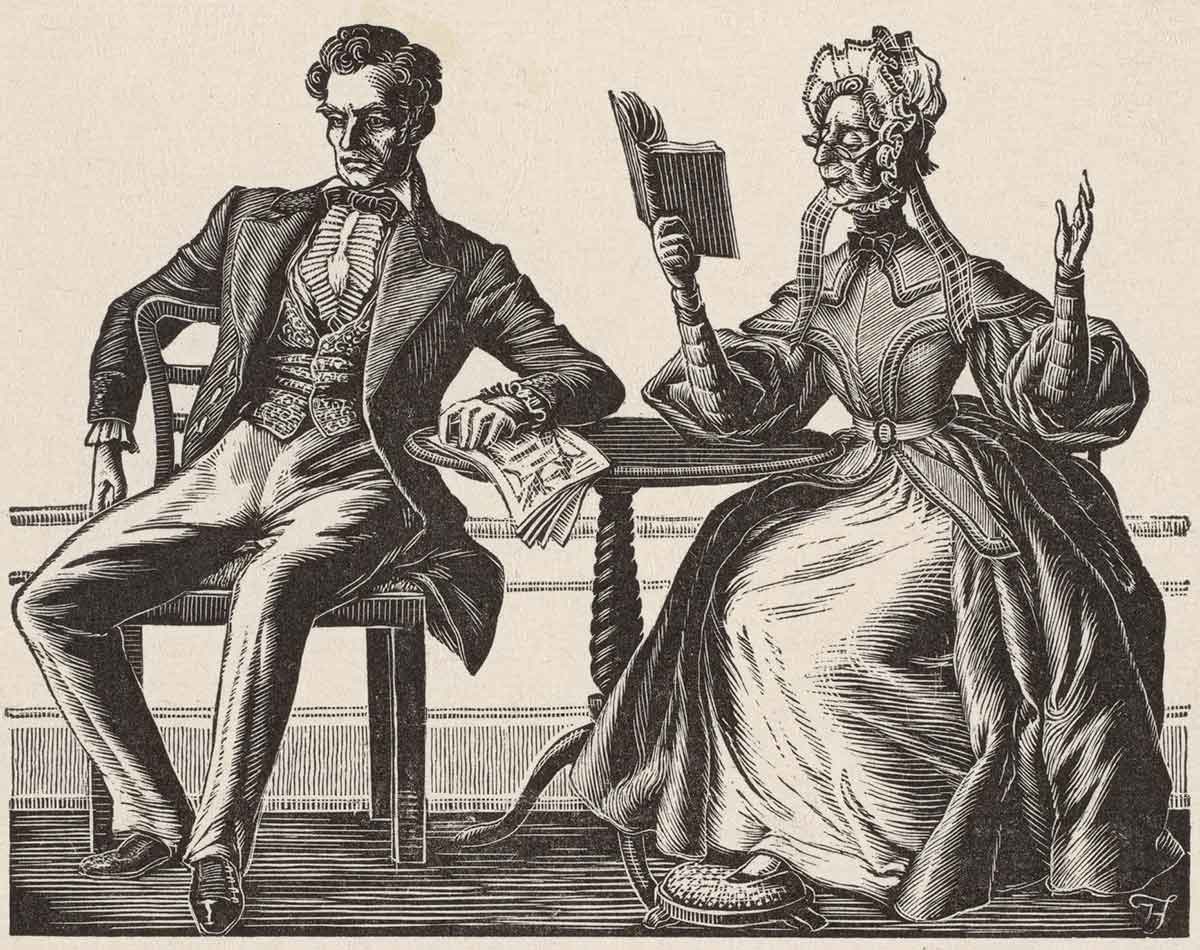 Reading was a popular pursuit in the 19th century. Miss Jenkyns Reading ‘Rasselas’ by Joan Hassall, illustration for Cranford by Elizabeth Gaskell

Quintus Servinton: A Tale Founded upon Incidents of Real Occurrence, the first novel written and published in Australia, was printed in Hobart in 1830–31.

A morality tale and story of convict life, the experiences of the novel’s central character closely resembled the life of its author, Henry Savery, who was transported to Van Diemen’s Land for forgery in 1825.

Review of Quintus Servinton, 1832, the Spectator:

Quintus Servinton is a remarkable publication in several points of view: it is the first novel from the Antipodes; and it is the production of a press that never produced a book before …

A small handprinting press arrived in New South Wales with the First Fleet in 1788, but lay idle until 1795 when convict George Hughes learnt how to use it. The earliest surviving document printed on the press, dated 30 July 1896, is a playbill for a performance of Jane Shore.

For many years, the presses in the colonies were largely concerned with publishing official government orders and regulations and government-sanctioned newspapers.

The first bound book, New South Wales General Standing Orders, was published in 1802 by the Government Press in Sydney. The first novel was written and published in Hobart by convict author Henry Savery in 1831. 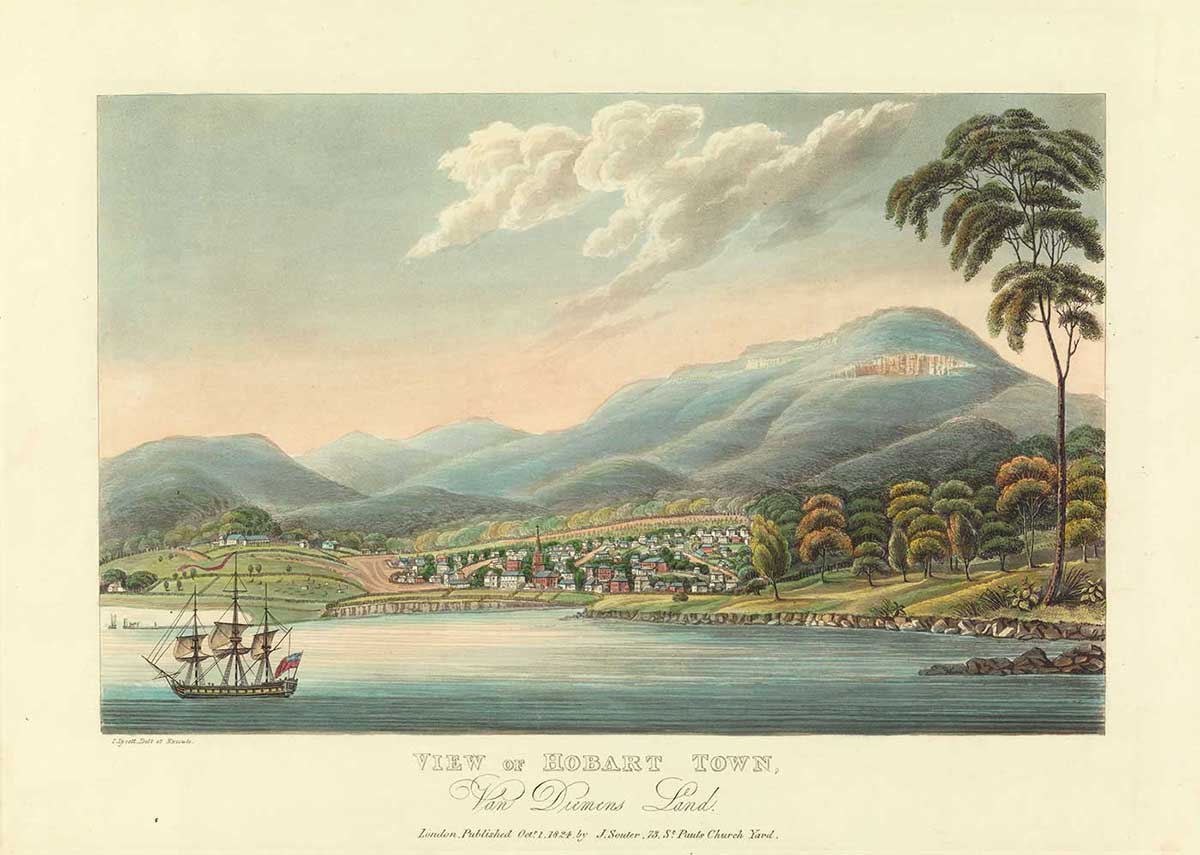 Savery was born on 4 August 1791 in Butcombe Court, Somerset, England, and was the son of a prominent banker.

After attending boarding school, he became involved in sugar-refining and newspaper businesses in Bristol, both of which failed. Savery returned to sugar refining with a new partner in 1822, but over-reached himself financially and resorted to forging bills of credit.

Savery tried to escape to the United States by ship in 1824 but was arrested after throwing himself overboard to evade capture. Savery pleaded guilty, leading to a death sentence that was commuted to transportation after the intervention of powerful relatives.

Educated convicts were scarce in Van Diemen’s Land. Savery’s accounting and writing skills were valued by colonial authorities and private settlers alike when he arrived in 1825. He was employed in the Colonial Secretary’s office, which incensed the local press who felt that convicts should not hold privileged government positions and tried to embarrass the unpopular Lieutenant-Governor George Arthur.

News of this controversy reached England, forcing Arthur to explain his actions to the British Government. As a result, the administration in Hobart ordered that all of Savery’s possessions be auctioned off in 1828.

Savery’s wife Eliza and son Oliver arrived in Hobart shortly afterwards, on the promise of reuniting with him in comfortable circumstances. They found him penniless and without social standing. Eliza had also grown close to Algernon Montagu, the colony’s new Attorney-General, who had chaperoned her to Hobart at her family’s request.

Savery attempted suicide, but was saved and imprisoned for debt. Eliza and Oliver Savery returned to England in 1829 and Savery never saw them again.

Reinvention as an author and Quintus Servinton

During his time in prison, Savery wrote a series of satirical sketches of colonial life which were published in Andrew Bent’s Hobart newspaper Colonial Times under the title 'The Hermit in Van Diemen’s Land'.

As it was illegal for a convict to publish, Savery used the pseudonym Simon Stukeley. The sketches were collected into one volume in 1829, thereby becoming the first book of essays published in Australia.

Savery also began writing Quintus Servinton during his incarceration. He completed the manuscript after being assigned from prison to work as a tutor in New Norfolk, 38 kilometres north-west of Hobart.

Melville also arranged for Quintus Servinton to be published in England by Elder, Smith & Son in 1832. In both cases, the book appeared anonymously.

The novel tells the story of Quintus Servinton, whose troubled life was predicted before his birth by a fortune-teller. It is a cautionary tale that charts Quintus’s course through life from boarding school to business owner, to forger and transported convict.

The book is a thinly veiled account of Savery’s life and the title provides clues about the author. ‘Quintus’, a name derived from the Latin word for ‘fifth’, referred to Savery’s place as the fifth surviving son in his family. ‘Servinton’ was an old family name.

As a novel about convict life written by a convict, Quintus Servinton provides a rare, firsthand account of an educated convict in Australia. The initial reviews were encouraging, though not effusive, and sales of the book did not meet Savery’s expectations.

Review of Quintus Servinton in the Spectator, 1832:

We can say truly that it is an affecting story, at times even powerfully written, and full of curious details.

Quintus Servinton has a happy ending. Savery himself was not so fortunate. In the years after his release from prison, his prospects fluctuated.

He was granted a ticket-of-leave in 1832, which was temporarily revoked when Savery was again caught up in anti-Governor Arthur sentiment. He was given a conditional pardon in 1838 but his attempts at farming failed.

In 1840 he was found guilty of forgery and sentenced to transportation for life for a second time. He was sent to Port Arthur, the notorious prison for secondary offenders, where he died on 8 February 1842.

Savery is remembered by the Henry Savery National Short Story Award, organised by the Fellowship of Australian Writers in Tasmania. He is also commemorated with streets bearing his name in Canberra and Victoria.

The honour of writing Australia’s first novel goes to Mary Leman Grimstone, whose book, Woman’s Love, was written in Hobart between 1826 and 1829. It was published in London in 1832.

Quintus Servinton has been reprinted twice: in 1964, with a biographical introduction by Cecil Hadgraft, and in 1984 as The Bitter Bread of Banishment by UNSW Press.

Henry Savery in the online Australian Dictionary of Biography