Elyne Mitchell, author of The Silver Brumby novel and various non-fiction works, lived most of her life at Towong Hill in the Upper Murray region of Victoria. Her life was profoundly influenced by the nearby Snowy Mountains which in turn shaped her writing. 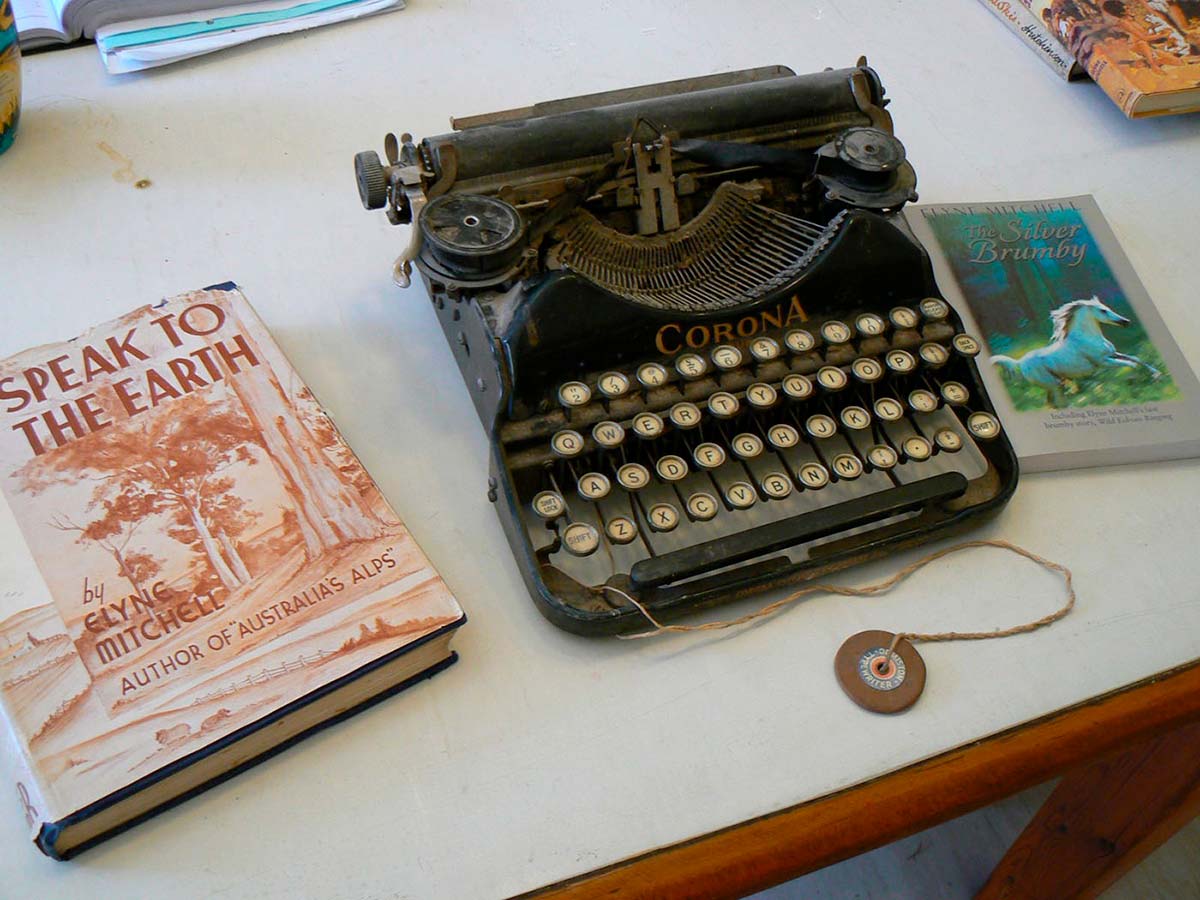 Elyne Mitchell's typewriter, with copies of Speak to the Earth (first edition) and The Silver Brumby (latest edition)

Mitchell often illustrated her work with her own photographs. The Corryong Library was renamed in Elyne Mitchell's honour in 2001 and a rural women's literary award also bears her name.

In 1988 she was awarded the Medal of the Order of Australia for services to literature. In 1993, Charles Sturt University awarded her an Honorary Doctorate of Letters. She also won Children's Book Council awards.

Mitchell was the daughter of General Sir Harry Chauvel, commander of the Desert Mounted Corps in the First World War. Her husband Tom was a prisoner of war in the Second World War and later a member of the Victorian Parliament.

Elyne Mitchell is best remembered for her Silver Brumby series of children's novels. She wrote the first book, The Silver Brumby, for her daughter Indi.

Towong Hill was isolated and far from libraries, and Mitchell was not satisfied with the reading matter available for her daughter, which lacked Australian content. At that time children's literature was dominated by British publishers.

Mitchell wrote The Silver Brumby with the mountains and brumbies as her setting and characters. In a tribute written by Jeff Prentice, Mitchell said Indi, aged 10, was 'crazy about ponies'.

The book started off as a short story but soon Indi was 'waiting at the typewriter for the next instalment'. The typewriter acquired by the Museum is one of those used by Mitchell in her long writing career.

The Silver Brumby, first published in 1958, is still in print. The popularity of this first brumby book led to the writing of a 13-volume series. The books have been read by thousands of young Australians, and people overseas – the series was published in over 40 countries. The Silver Brumby was made into a feature film in 1993, starring Caroline Goodall and Russell Crowe.

Since the book first appeared, the presence of brumbies (feral horses) in Kosciuszko National Park has become a major land management issue. Many people feel strongly either for or against the horses' presence in the park. 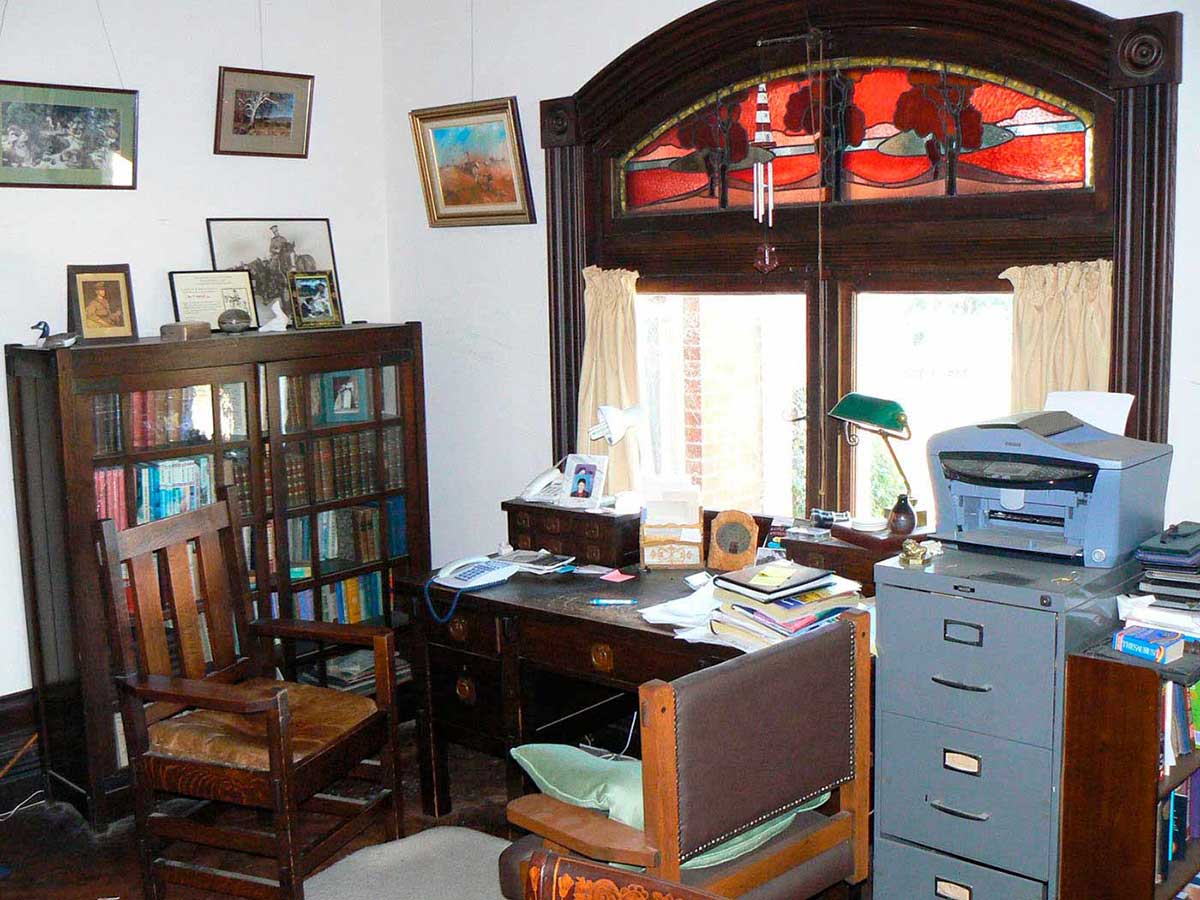 Elyne's study at Towong Hill, where she wrote her books

Woman of the high country

Mitchell's work focused on the Snowy Mountains, including the Main Range, the Cascades and other areas which she popularised in the Silver Brumby series. She wrote of the mountains as being for her a symbol of 'a profound belonging to the Australian land'.

In non-fiction books like Australia's Alps, Speak to the Earth and Towong Hill, Mitchell evoked a powerful sense of place. Her deep love of the mountains, the Upper Murray, station life and nature are central themes in much of her work. Her relationship with nature evolved over time as seen in several of her works.

Mitchell was a champion skier internationally; she skied the Snowy Mountains whenever she could. She did many significant exploratory ski journeys in the Snowies in the 1930s-40s and was the first woman to ski parts of the steep western faces. She skied until she was 77.

Horses were an important element in Mitchell's rural life as well as her fiction, and she made many long rides through the mountains as well as helping run Towong Hill cattle station.

Elyne Mitchell's adventurous spirit is reflected in the 1948 trip she did with husband Tom and two companions when they drove a jeep across the Snowies – the first vehicle crossing of the mountains.

The typewriter is a Corona Four and, judging by the serial number, was manufactured in September–October 1936. It was used by Mitchell at various times during her long life. She also used Remington typewriters and, from 1993, reverted to longhand writing that was word-processed by an assistant.

Corona was an extremely popular brand of typewriter, made in the United States. It was first launched in 1912 and various models were manufactured. Many famous authors used Corona or Smith-Corona typewriters, including: Ernest Hemingway, Tennessee Williams, ee cummings, TS Eliot, Allen Ginsberg, Sinclair Lewis, Dorothy Parker and Kurt Vonnegut.

The Museum is grateful to Elyne Mitchell's son John for donating the typewriter. 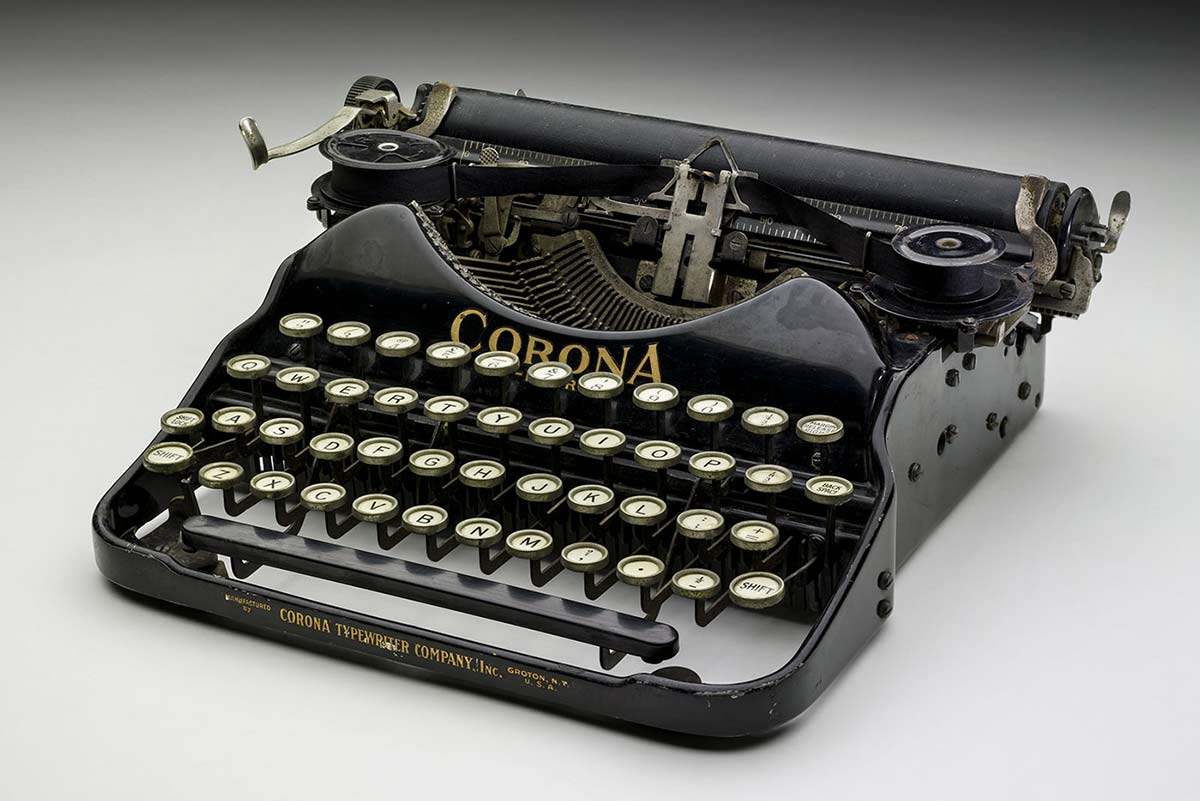