Oscar's sketchbook contains drawings by a young Aboriginal man who grew up in Far North Queensland in the late 1880s.

Oscar's pencil drawings range from scenes of traditional ceremonies, to interactions with Europeans and places he visited in the surrounding area. It is a rare record of life in the late 19th century from an Aboriginal person's perspective.

In 1899 Augustus Henry Glissan, the manager of Rocklands Station, near Camooweal in Far North Queensland, posted a small blue-lined notebook to family friend Charles Bage, a medical practitioner in Melbourne.

Inscribed on the book's front cover were the words 'Drawn by Oscar, Cooktown boy, aged 18 years'.

At some time Bage must have passed the book on to his colleague Sir Colin MacKenzie, whose collection was to become the nucleus of the Australian Institute of Anatomy. In the early 1990s, nearly 100 years since it had left Rocklands, Oscar's sketchbook was rediscovered by National Museum of Australia staff.

Thus, by a series of fortuitous links, this seemingly insignificant little notebook produced in remote Australia at the end of the 19th century, had been kept and passed on. As a result, the set of 40 pencil drawings, which are the only identified works of the 19th-century Aboriginal artist known as 'Oscar', have been preserved in the Museum's collection. 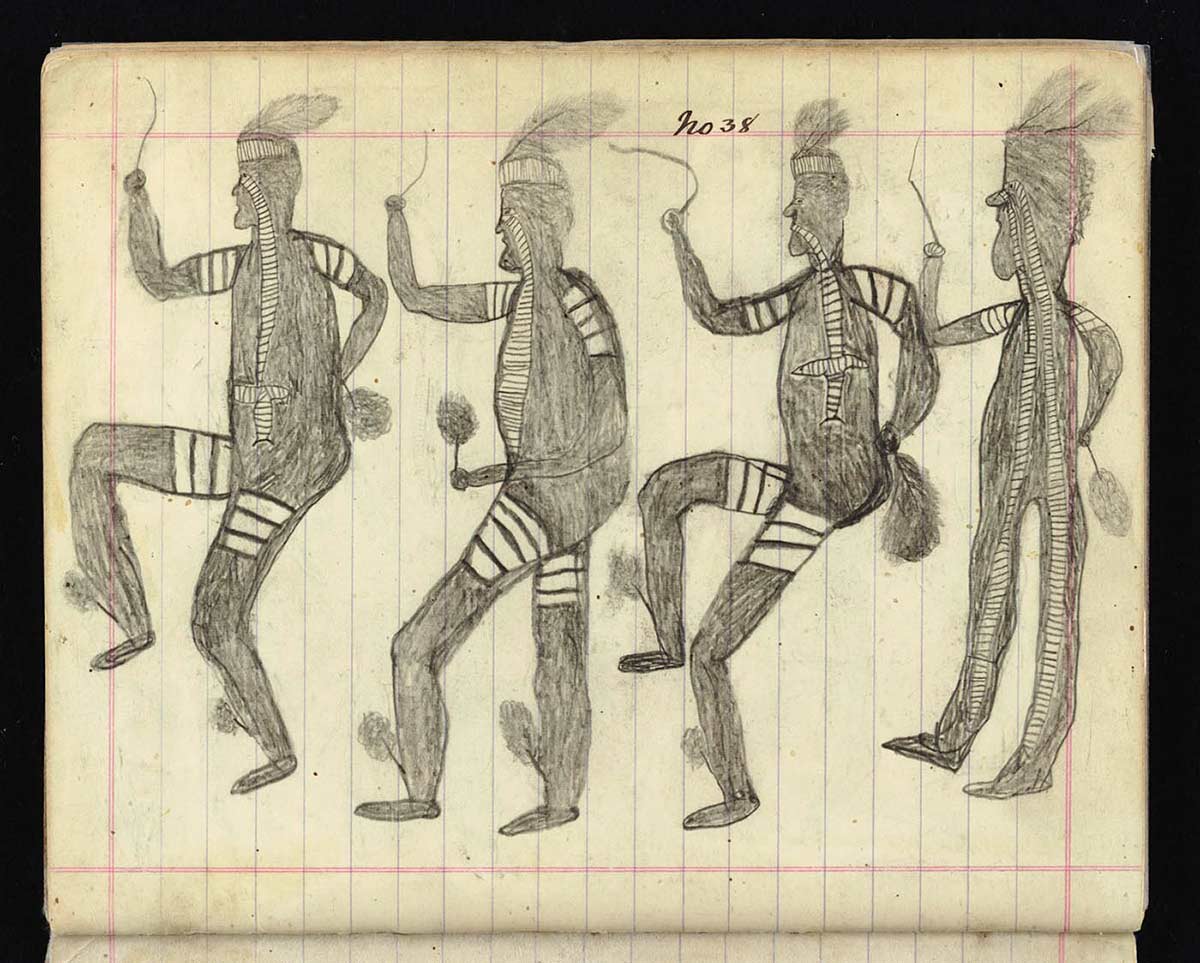 Glissan obtained Oscar in 1887 from the police at Cooktown, when Oscar was about nine or 10 years old. The police brought him by steamer to the Gulf of Carpentaria where he was given to Glissan, who took him on the long return journey to Rocklands on horseback.

Oscar had never ridden a horse before and Glissan recalls that the child had a 'bad time' lasting the distance of 240 miles but that he had remained as a stockman at Rocklands ever since, and that he 'rides well now'.

Explaining the drawings he was sending to Bage, Glissan wrote:

Ever since the boy came here he has had a liking for drawing & some of his etchings on stone with charcoal and chalk are so really well done, that I thought some day I would get him a book and some coloured pencils & let him have a good try at it.

Glissan added an index to the sketchbook which gives titles to all the sketches, briefly describing and locating them. The drawings appear to present an autobiographical account of Oscar's life.

Nearly half are concerned with the Palmer River goldfields area around Maytown and Cooktown. The drawings depict both the traditional life of the Indigenous tribesmen, especially ceremonies and fight scenes, and the interchange between Aboriginal, European and Chinese cultures.

Palmer River Govt Officials is a lively caricature of mining wardens pursuing Chinese miners. Oscar's sense of humour is shown in similar drawings such as Some Cooktown Swells. 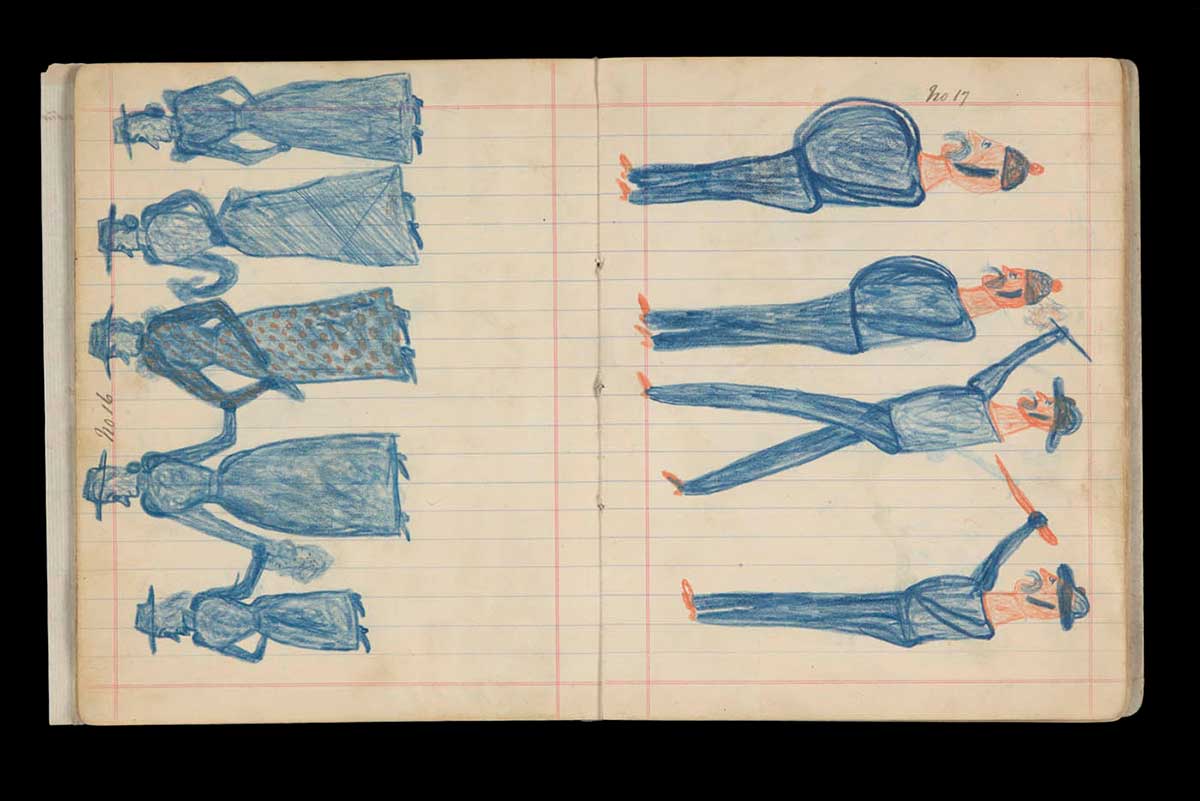 The remaining drawings illustrate aspects of Oscar's life at Rocklands. This series includes graphic depictions of the brutality of the Queensland Native Police Force, such as Murderer Hoppled to Tree. Troopers dispatching.

Only one drawing refers to Oscar's working life and, significantly, Boss Ordering Boys to Bathe (Cold Weather) probably contains images of both Oscar and Glissan.

Oscar is probably the small figure at the end of the line of 'boys' while the 'boss' is undoubtedly Gus Glissan. Photographs taken in the 1890s show that Glissan was tall and solid, with a luxuriant moustache.

Oscar's life was perhaps typical for his time and place. The disruptions and violence caused to traditional Indigenous life by the Palmer River gold rush in 1873 led to dispossession from his tribal lands, either by being orphaned or stolen from his family.

Obtained by Glissan as a 'boy' or stockman, Oscar was forced to adapt to a completely different way of life. What is unique in Oscar's story is that he was encouraged to tell his life in drawings, and equally remarkable is the fact that his small volume has been preserved.

This is an edited version of an essay by registrar Carol Cooper, which first appeared in the Captivating and Curious publication.

Sketchbook with contents drawn by Oscar, Cooktown boy, aged 18 yearsAn exercise book with green-black marbled paper on the front and the back covers, and a green fabric spine. A label attached to the front cover reads "Drawn by Oscar. / Cooktown boy / Aged 18 years". It also has a stamp of the Australian Institute of Anatomy in Canberra on it. The sketchbook contains 40 drawings in lead and col...