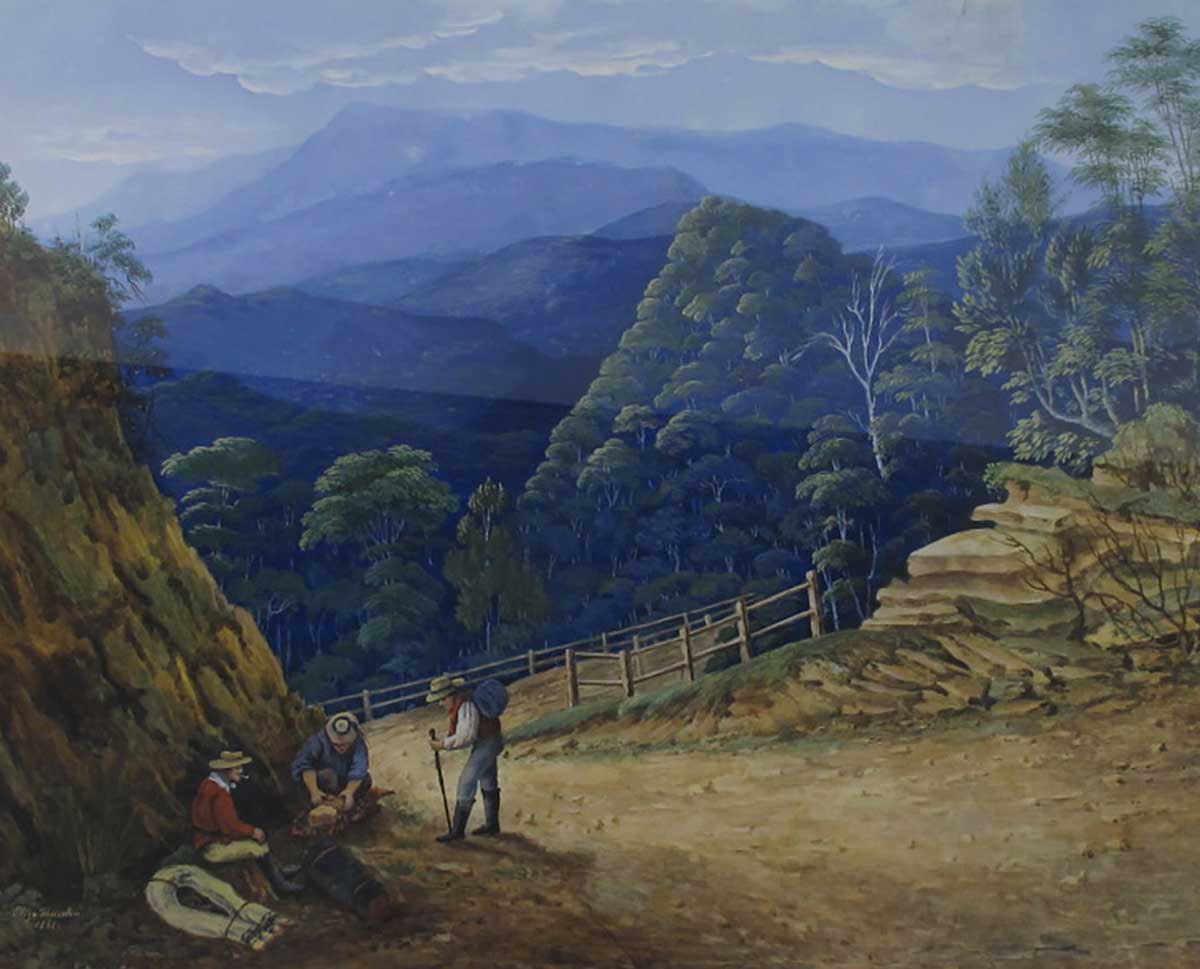 In 1813 Gregory Blaxland, William Charles Wentworth and William Lawson became the first European settlers to successfully navigate a path across the Blue Mountains.

Their feat opened the inland to pastoralism and set in motion a pattern of land disputes that would result in the dispossession of First Nations peoples across the continent.

At first, the colonists were too busy surviving to consider trying to cross the mountains. However, by the time Governor Lachlan Macquarie arrived in 1810, a combination of drought, insect plagues and exhaustion of the soil around Sydney made finding fresh lands imperative.

To Gregory Blaxland and William Wentworth, Esquires, and Lieutenant Lawson, of the Royal Veteran Company, the merit is due of having, with extraordinary patience and much fatigue, effected the first Passage over the most rugged and difficult part of the Blue Mountains. 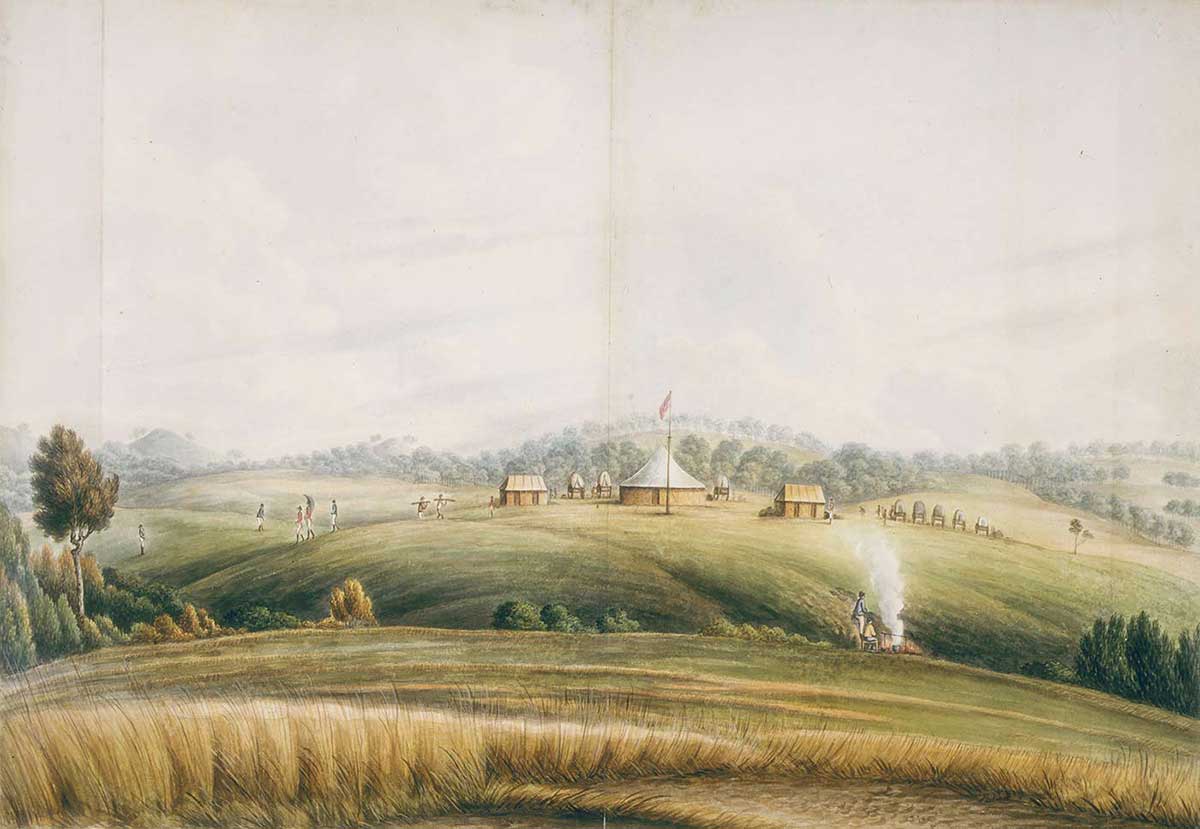 The Plains, Bathurst by John Lewin

As Sydney established itself, the Blue Mountains formed a barrier to the westward expansion of the new colony. Local Gundungurra, Dharawal, Wiradjuri, Wanaruah, Darug and Darkinjung peoples used two main routes to cross the Blue Mountains. Most Europeans saw the range as a forbidding maze of sandstone bluffs, deep gorges and dense bush.

At first, the colonists were too busy surviving to consider trying to cross. However, by the time Governor Macquarie arrived in 1810, a combination of drought, insect plagues and exhaustion of the soil around Sydney made finding fresh lands imperative.

Blaxland, inspired by the need for more grazing land for his flocks and frustrated by the Governor’s refusal to grant him more coastal land, decided to attempt to cross the Blue Mountains. Macquarie granted permission for the venture, and Blaxland invited Wentworth and Lawson, a trained surveyor, to join him.

On 18 May 1813 they departed from Emu Plains with James Burns, a local guide familiar with the bush and its Aboriginal pathways, as well as four convict servants. The expedition crossed the mountains in three weeks, adopting the novel method of traversing the ridges instead of looking for a route through the valleys as previous explorers had done.

Consequences of the Blue Mountains crossing

Macquarie rewarded the three men with grants of land. He then sent surveyor George William Evans to explore beyond the point that Blaxland, Wentworth and Lawson had reached and report on the extent and fertility of the land. Evans did this, and so became the first European to completely cross the Great Dividing Range.

Macquarie then set William Cox, a former army officer turned builder, the mammoth task of constructing a road suitable for carriages and stock to traverse. Macquarie made the first official visit to the Bathurst Plains in April and May 1815, lavishly praising the achievement of Cox and his convict labourers.

On 4 May 1815, three days before he would hoist the British flag and commence laying out the town of Bathurst, Macquarie first met some of the First Nations people of the area, the Wiradjuri.

We found here also three adult Male Natives and four Native Boys of this new discovered Tract of Country, who shewed great surprise, mixed with no small degree of fear at seeing so many strangers, Horses and Carriages – but to which they soon appeared to be reconciled on being kindly spoken to.

Initial relations were cordial, because the new settlement remained a small government outstation. It was not until grants were made to settlers that hostilities broke out. In 1820, there were 114 Europeans. In only four years, this grew to more than 1,200. Another drought, the arrival of flocks of sheep and the fencing of land disrupted their food supplies to such a degree that the First Nations peoples around Bathurst realised that their way of life was fundamentally threatened.

We have now commenced hostilities against them in consequence of their killing a great number of shepherds and stockmen, but afraid we shall never exterminate them, they have such an extensive mountainous country for them to flee from their pursuers.

Responding to urging from settlers, Governor Darling declared martial law on 14 August 1824. Over the next four months, a vigorous military campaign was launched against the local First Nations people, resulting in at least 100 deaths.

Mikey Robins discusses the Blaxland clock and the first European crossing of the Blue Mountains in 1813.