1797: Introduction of the merino sheep to Australia 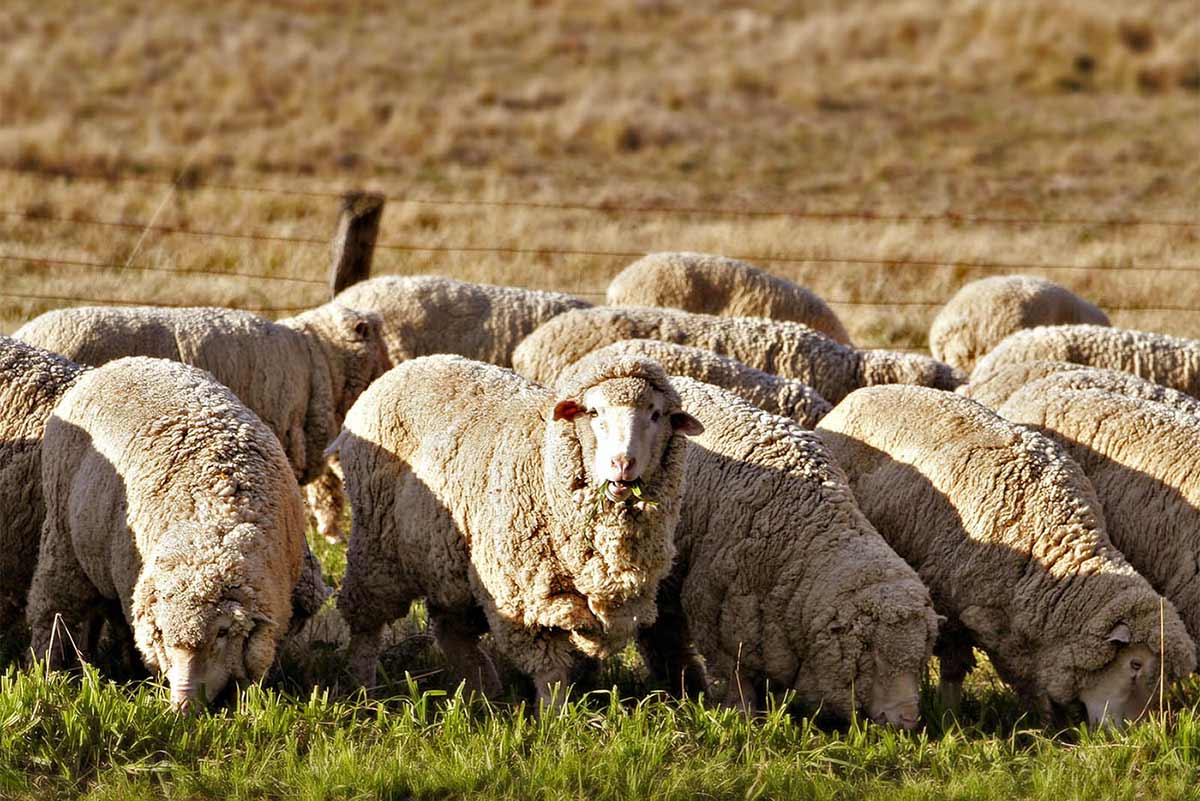 In 1797 the first merino sheep were landed in Australia. Unlike earlier breeds, this Spanish variety was much better suited to the Australian environment and was a formidable wool producer.

The first Australian-produced fleece was sold in England in 1807 and by the late 19th century, wool had become Australia’s major export.

The industry has gone through cycles of extreme growth and contraction, but today Australia still produces more than half of the world’s merino wool.

Each officer ha[d], on his own account, given up during the passage the comforts of his accommodation on board and filled them with such animals as their respective cabbins [sic] were capable of taking in. This, altho’ a private consideration, is nevertheless a public benefit to the colony, and is much to be commended.

Human domestication of wild animals began with the dog more than 12,000 years ago and sheep and other livestock followed soon after. Over millennia, various sheep breeds have been developed across the world in response to local conditions and selective breeding.

As such, two separate varieties of the Spanish merino sheep emerged over hundreds of years. Settled merinos (estantes) had coarser wool in response to the harsher weather conditions they endured in winter, while the transient merinos (transhumantes) were moved to seasonal pastures throughout the year and so developed finer, softer wool.

The Spanish monarchy owned one of the finest flocks of transient merinos in Spain and tightly controlled access to the breed. Exporting merinos was banned, on pain of death, prior to 1765.

After this date, limited numbers of the renowned Escorial flock were sent to breeders in other countries and closely monitored. The royal family made gifts of their merino sheep to loyal subjects as rewards for valuable service and to seal diplomatic alliances.

The first sheep in Australia arrived with the First Fleet in 1788. There were 29 fat-tailed sheep listed on the fleet’s manifest, collected from the Cape of Good Hope in South Africa. Intended as a source of meat, they were not well suited to the Australian environment and, like the Indian sheep that were later imported, did not produce good quality wool.

Captain Henry Waterhouse and Lieutenant William Kent brought the first flock of 26 merinos from the Cape of Good Hope to Port Jackson in 1797.

The sheep came from a flock originally given to Prince William of Orange in the Netherlands by King Carlos III of Spain. In 1789, the Prince had sent two rams and four ewes to the warmer Dutch colony at the Cape of Good Hope to be cared for by Colonel Robert Jacob Gordon.

Gordon returned the original breeding animals in 1791 when ordered to do so by the Dutch government, but kept their offspring. Gordon’s wife inherited the sheep after his death, and sold them for £4 per head to Waterhouse and Kent.

The flock was divided between the HMS Reliance and the storeship Supply for the journey back to Australia. Bad weather nearly doubled their expected time at sea, and more than half the sheep perished.

Captain John Macarthur, an officer in the NSW Corps, offered Captain Waterhouse 15 guineas a head for the surviving sheep on the condition he could buy them all.

Waterhouse refused the offer and grazed his sheep at The Vineyard, a 140-acre property on the Parramatta River he had bought on his return from the Cape. He kept his merino flock segregated, allowing them to breed only with one another.

As his flock increased, Waterhouse distributed a few sheep between Macarthur, the Reverend Samuel Marsden, Lieutenant Kent and Captain Thomas Rowley. When Waterhouse returned to England in 1800, William Cox bought most of the flock from him, including several of the original sheep from the Cape. The remainder went to Macarthur. 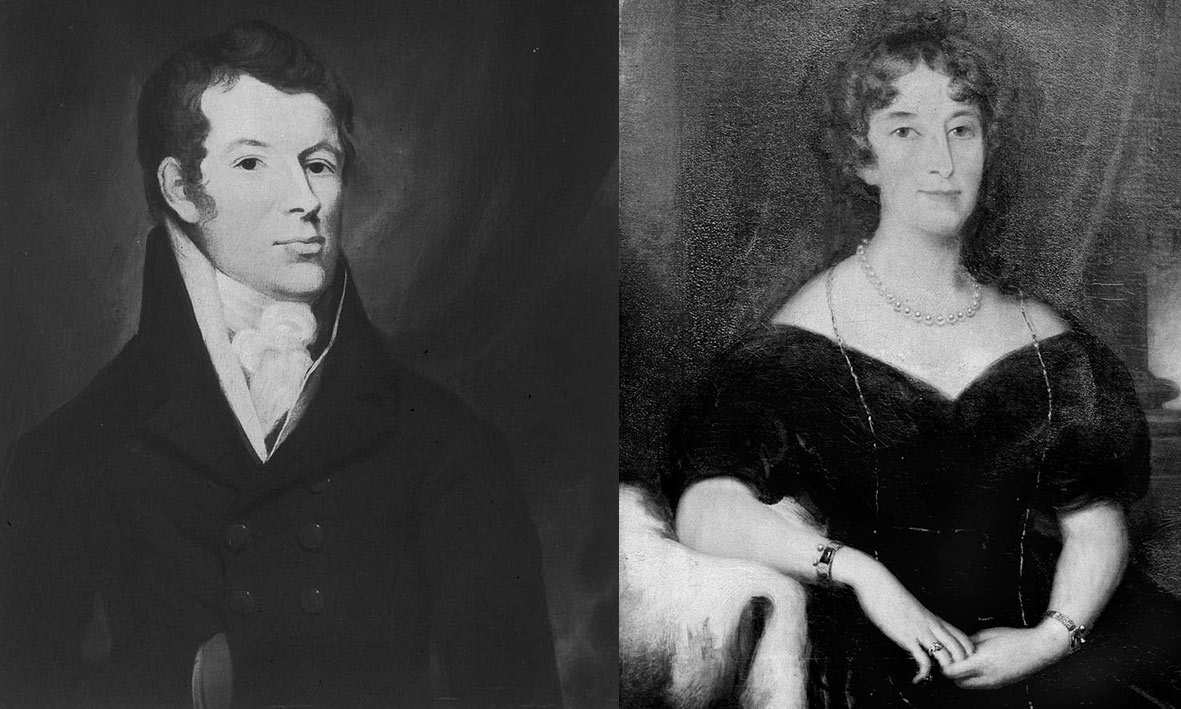 Posthumous paintings of Captain John Macarthur and Elizabeth Macarthur, about 1850

Macarthur and his wife Elizabeth established Elizabeth Farm at Parramatta after the Governor granted him 100 acres there in 1793. Appointed Paymaster of the NSW Corps and Inspector of Public Works, Macarthur controlled much of the colony’s resources and had unrestricted access to convict labour.

His land grant was cleared using convicts and, as owners of the first farm in the colony with 50 acres or more cleared and cultivated, the Macarthurs were awarded a further 100 acres. The Macarthurs worked together to expand their pure merino flock, breeding more than 4,000 by 1803.

John Macarthur was absent from the colony for extended periods of time – from late 1801 to mid-1805, and from 1809 until 1817 – defending charges of misconduct in England and avoiding arrest in Sydney. During this time, Elizabeth and John’s nephew Hannibal developed and managed the flock and wool production.

In 1807 the Macarthurs sent the first bale of Australian wool to England for sale. Auctioned at Garraway’s Coffee House in London, it sold for 10 shillings four pence per pound. In 1813, Australia’s first commercial shipment of wool, from Elizabeth Farm, arrived in England valued at more than £8,000, based on the previous sale price. 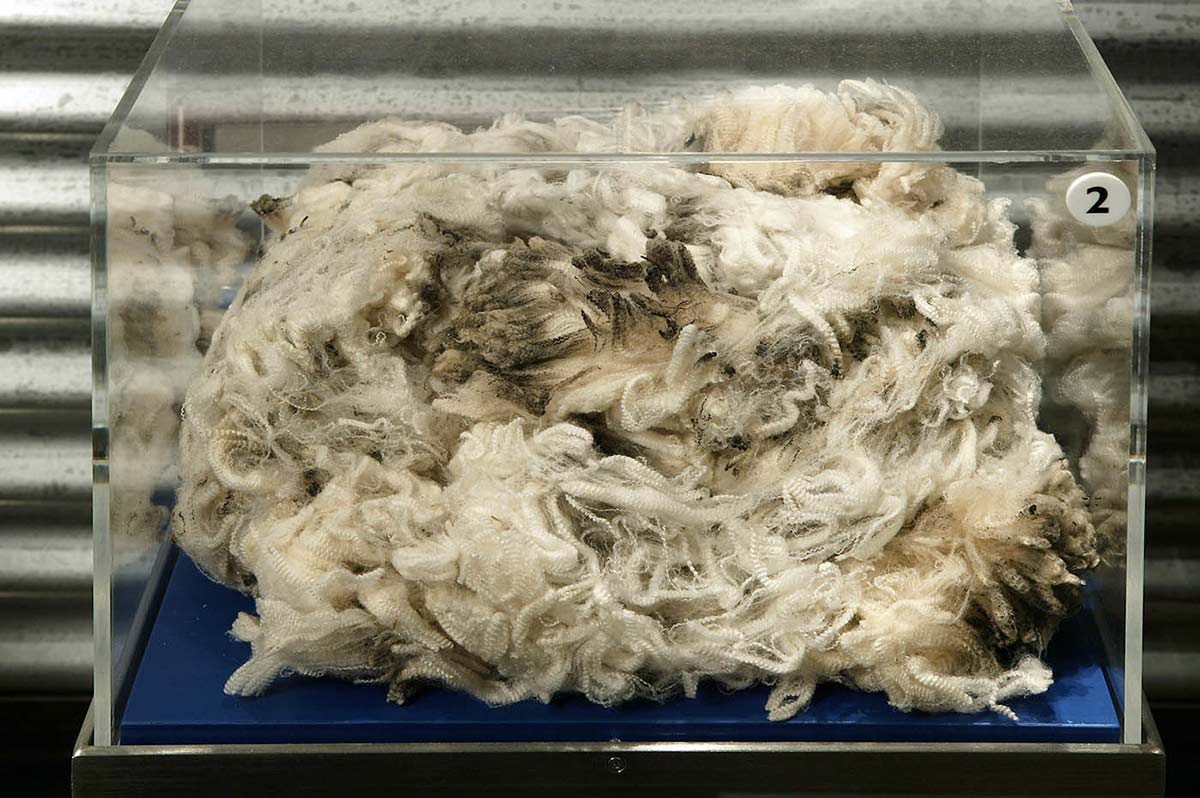 In later years, at their Camden Park stud, the Macarthurs bred their flock with other merinos from around the world to ensure their sheep remained healthy. This increased the quality of their wool and the number of merino bloodlines available in the colony.

Although many in Australia and Britain regarded him as a rogue, Macarthur worked hard to start Australia’s wool industry. It was fortuitous that the production and export of Macarthur’s Australian wool took place when the British Government was looking for a dependable supply during the ongoing Napoleonic wars in Europe.

By lobbying influential administrators, Macarthur was also able to secure extensive land grants for merino farming. This allowed him to produce consistently fine quality wool from a rapidly expanding merino flock, making the colony a reliable source that rivalled Spain and Saxony (in Germany). By the late 19th century, wool was Australia’s main export.

The first flock of merinos greatly increased in the 1820s with another 5,000 imported from Europe and South Africa.

In the second half of the 19th century, Australian merino breeders intensively crossbred their sheep with other international merino bloodlines. This produced larger, more robust sheep that could yield up to 10 times more fleece than the original Spanish variety. Their wool was finer, more densely crimped, cleaner, more elastic and stronger, and thus better suited to the expanding woollen textile industry in Europe.

Bumpy ride on the sheep’s back

The wool industry has been an integral part of the Australian economy for 200 years, but has experienced a series of boom and bust cycles.

Flock numbers decreased by almost half to 54 million during the devastating Federation Drought (1895–1902) and sheep numbers would not return to their pre-drought levels until 1926. However, during the First World War the industry received a boost when the British Government bought Australian wool at favourable fixed rates.

The unit price for wool again improved dramatically during the Second World War as demand increased for uses such as uniforms and blankets.

By the 1950s, the industry was booming and it was said that ‘Australia was riding on the sheep’s back’. In 1950–51 the gross value of wool production made up 56 per cent of the total value of all agricultural industry production.

However, the good times did not last for long. The mass introduction of synthetic fibres in the second half of the 20th century greatly affected the industry, and by 1970–71 wool represented only 15 per cent of Australia’s total agricultural production.

In the 1970s the federal government introduced a minimum reserve price scheme that subsidised the industry. By 1990 it was apparent the scheme was economically unviable and, when it was discontinued, the industry stalled.

Wool sample boxGlass-fronted wooden box, displaying a wool sample. Painted on a wooden banner at the top of the box: "A. LUCIAN FAITHFULL. SPRINGFIELD.". Handwritten on a piece of card below this is: "ENTERPRISE / SAMPLE 195".

Charles Massey, Breaking the Sheep’s Back: The Shocking True Story of the Decline and Fall of the Australian Wool Industry, University of Queensland Press, St Lucia, Queensland, 2011.