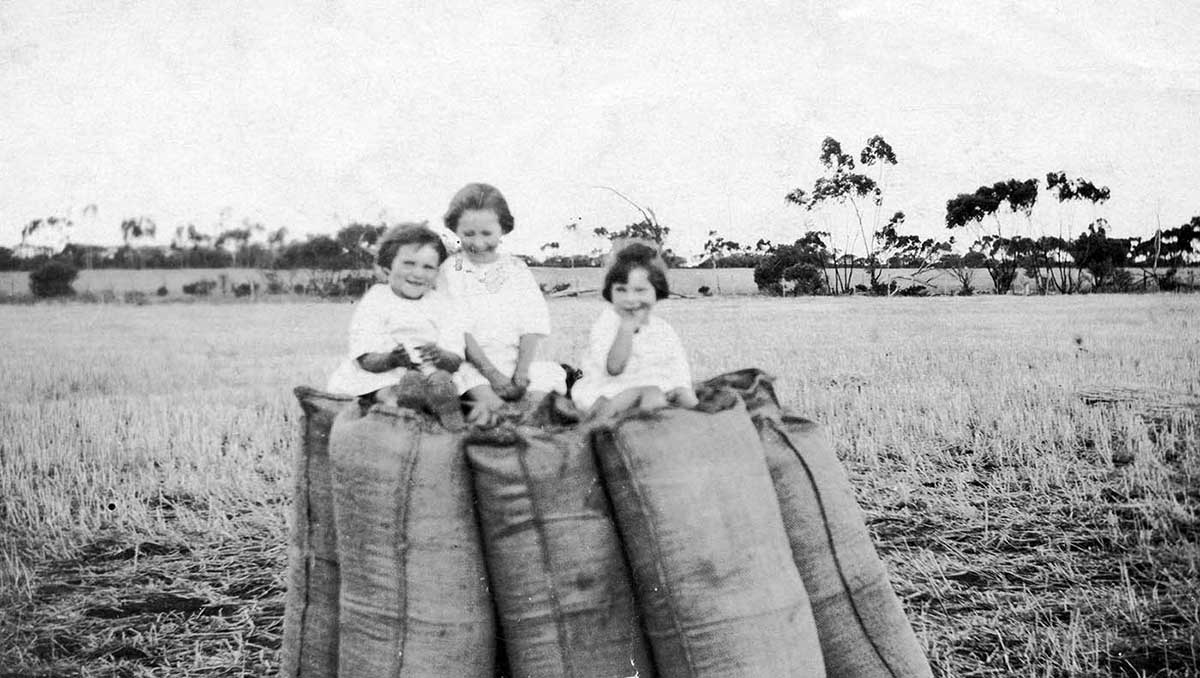 Florence, Doris and Melvie Garth – daughters of returned soldier Tom Garth and his wife Kate – at their soldier settlement farm ‘Glenyarri’ in the Carnamah district of Western Australia

During the First World War, state and federal governments agreed to coordinate efforts to build farming communities of returned soldiers and their families.

Officials modelled soldier settlement on prior efforts to populate the Australian inland by splitting up large pastoral estates into small farms.

The schemes ultimately proved to be a failure, and had profound social and ecological effects.

The heavy rain and floods of last June resulted in a considerable spread of the salt, and the late rains of August did further damage. The position at present is that about 400 acres of this Northern portion are quite bare, and apparently useless.

In the 19th century and well into the 20th, Australian policy-makers held fast to the ‘yeoman ideal’, a somewhat romantic belief in the virtue of agricultural activity and the societal value of small-scale farming communities.

During the First World War, popular imagery of the sturdy, independent yeoman merged with that of the noble, patriotic digger to create a powerful symbolic character: the soldier settler, a worthy figure capable of promoting social stability and economic productivity.

From as far north as the Atherton Tablelands in Queensland, to Kangaroo Island in South Australia, every state saw new settlements develop.

The Western Australian Government settled more than 5,000 returned soldiers, many from the British Army, on farms. By 1929 just over 3,500 remained on the land.

Difficulties encountered by soldier settlers across Australia during the 1920s sparked a Commonwealth investigation to account for losses. In 1929 Justice Pike identified the main causes of settler failure as a lack of capital and land, settler unsuitability, and falling prices for agricultural produce.

Soldier settlement in the Carnamah district

Carnamah grew into a thriving service centre as soldier settlers, many already married, arrived to establish farms and families. The labour-intensive nature of farming created demand for workers. As the population rose, the new arrivals formed sporting and social clubs that met regularly at Carnamah or in smaller centres elsewhere in the district.

When the soldier settlers first arrived, most of the Carnamah district remained undeveloped bush and pastoral land. Settlers made and bought devices to clear the scrub for cropping.

As in many parts of Australia, the subsoils beneath the slightly undulating country of the Carnamah area are rich in salts. Settlers replaced native trees, shrubs and grasses – a plant community able to hold and use water efficiently – with bare, cultivated earth and short rooted annual crops. Water seeped below and brought destructive salts to the surface.

Returned soldier Tom White and his wife Hilda called their Carnamah district farm ‘Rosedale’. As the decades passed, clearing and cropping on Rosedale had unfortunate consequences. The creek running past the homestead turned saline, and any trees remaining beside the waterway sickened and died.

‘Salt encroachment is bad’ in the Rosedale area, an inspector reported in 1948. Of the 997 acres held by the White family, the inspector classified 66 acres as ‘Salt useless’ and 196 acres as ‘Rising salt’.

Falling wheat prices in the late 1920s and the economic depression of the early 1930s caused hardship for many farmers in the Carnamah district. As families departed, mechanisation enabled surviving farmers to work much larger areas.

Today, the broad-acre reality of modern agriculture in the depopulated, marginal farming district of Carnamah bears little resemblance to the hopeful visions of a new yeomanry that underlay soldier settlement.

White wooden 'make-do' stool made by soldier settler Harry Newman at Narrogin, Western Australia, in 1922Soldier settler, Henry 'Harry' Newman made this stool around 1922 from pine kerosene packing cases and broom handles. The stool served many uses within his growing family. Originally a kitchen stool, its legs were shortened and it was adapted for use as a nursing stool. Kerosene was commonly used on farms and kerosene containers...

‘A land fit for heroes? A history of soldier settlement in New South Wales, 1916–1939’, an online collaboration between Monash University, University of New England, Department of Veterans’ Affairs, and State Records NSW