Artist and farmer Diana Boyer has a deep engagement with contemporary ecological and political issues affecting the land and people of rural Australia.

Diana was born and trained as a botanist in Argentina. In Australia she worked as an artist and a farmer, spending more than 25 years on Bobbara Creek, a family farm in the Binalong district of southern New South Wales. 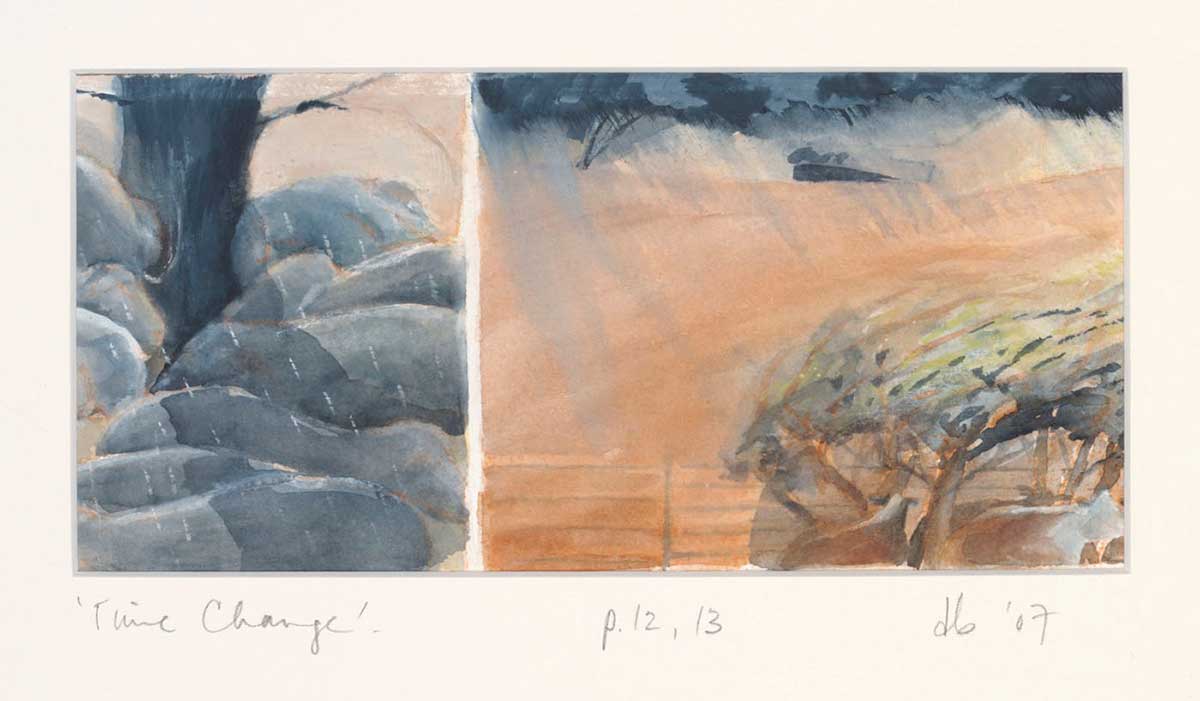 The impact of climate change on farm activity and the land informed Diana's work as an artist. 'I wish to record these experiences, whilst remaining sensitive to their ambiguity, and the humour necessary for survival,' Diana wrote in 1997.

The sketchbooks, photographs, paintings and artworks in the National Museum's Diana Boyer collection record one woman's life and work while acknowledging a broader dynamic social and ecological context.

Diana Boyer was born in Argentina in 1948. She studied botany at the National University of Buenos Aires in the early 1970s.

Diana witnessed violent conflicts between student protesters and soldiers acting on behalf of the military government. Largely in response to this political turbulence and the brutal persecution of dissidents, Diana and her husband Norman decided to leave Argentina. They migrated to Australia in 1980 and in 1981 they bought Bobbara Creek.

The Boyers ran a mixed grazing and cropping farm near Binalong, about 100 kilometres north-west of Canberra, while Diana continued to work as an artist.

After a series of wet years in the 1980s and 1990s, drought took hold across south-east Australia. Temperatures rose. As scientific warnings mounted of an impending climate catastrophe, Diana's work focused on the local ecological effects of global warming in the Binalong district.

One of Diana's major works was the Time Change animation completed in 2006. Using a series of watercolour works, the powerful and at times whimsical animation shows the life of a female farmer in the Binalong district in the future, when global warming has profoundly altered patterns of farm activity and the land.

Diana's training as a botanist and artist came to the fore with her 2006 Time Change animation. These original watercolour works were used in the animation, which shows the life of a future Australian female farmer, when global warming has profoundly altered patterns of farm activity and the land. 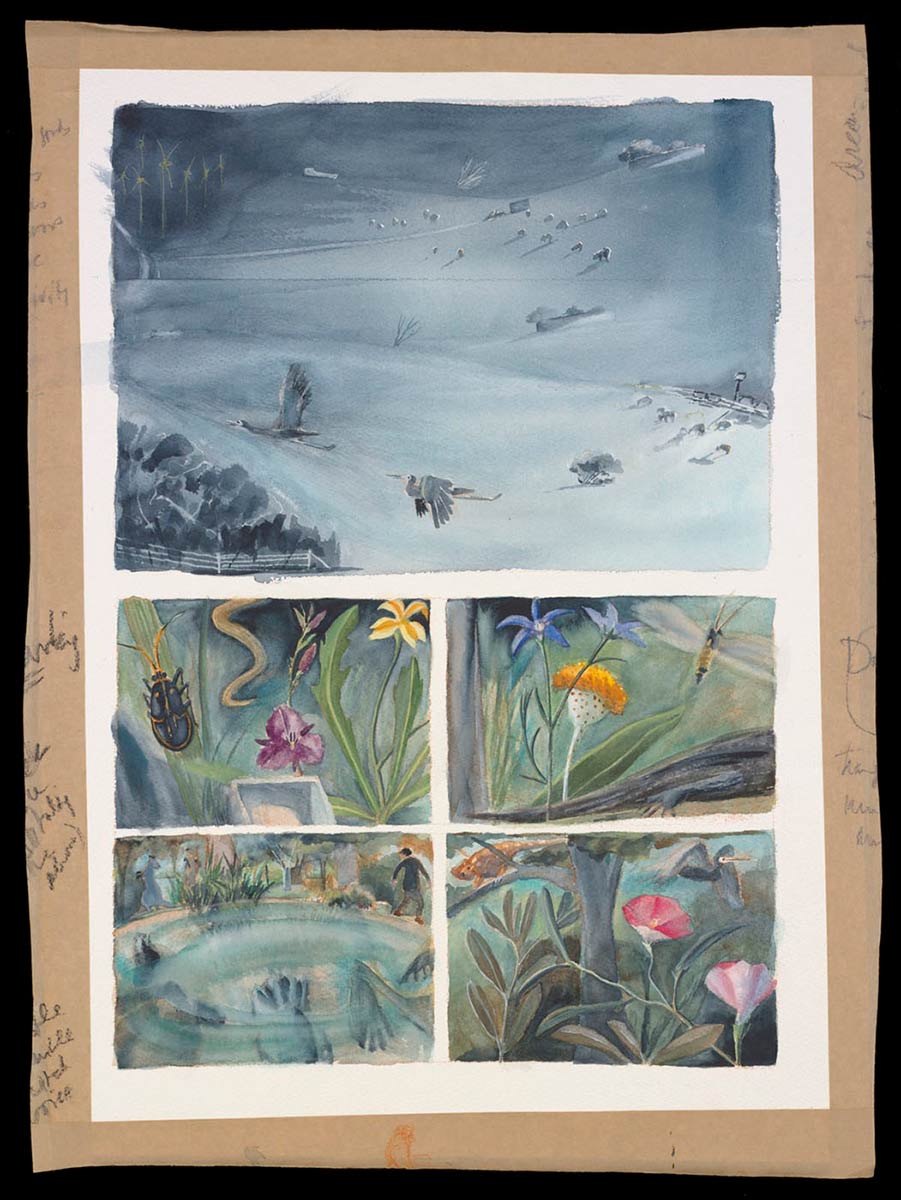 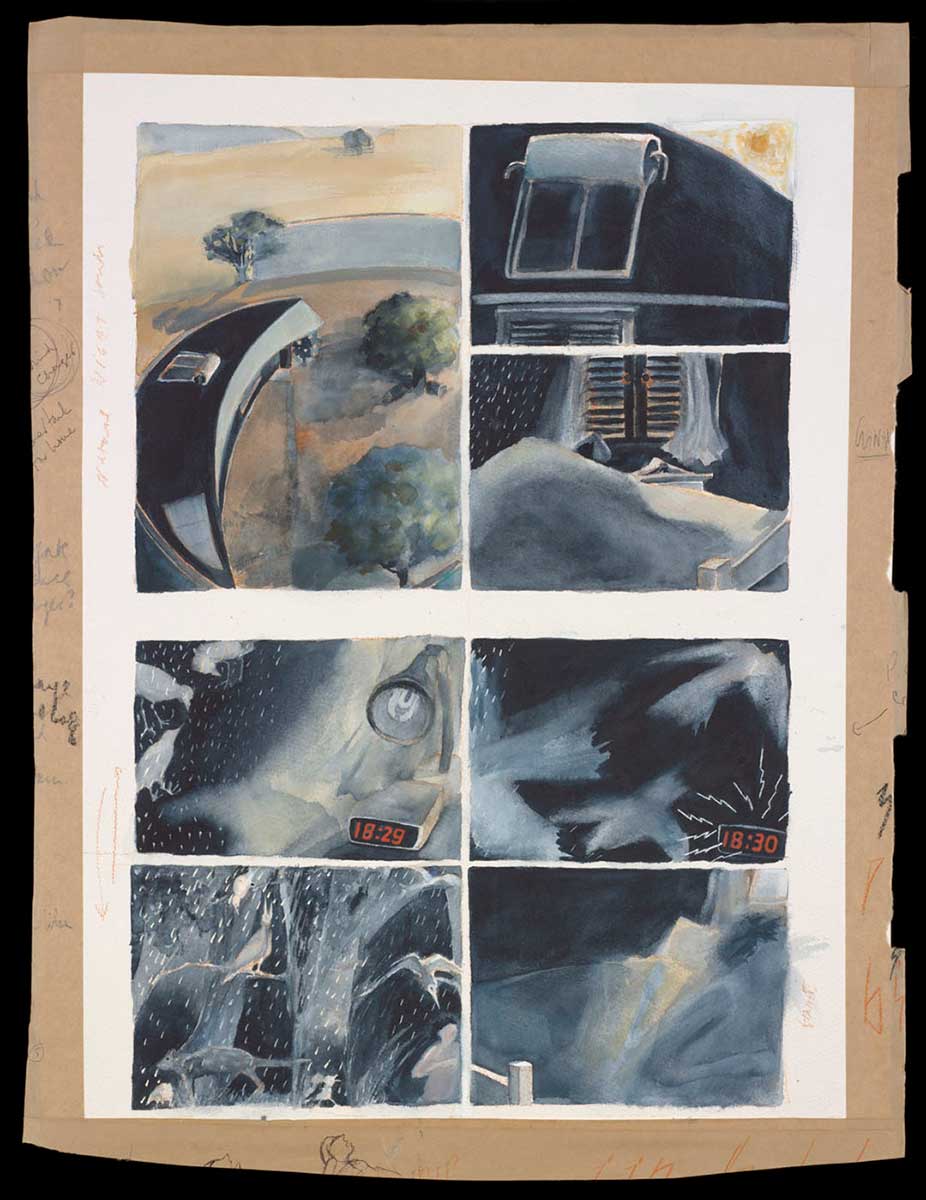 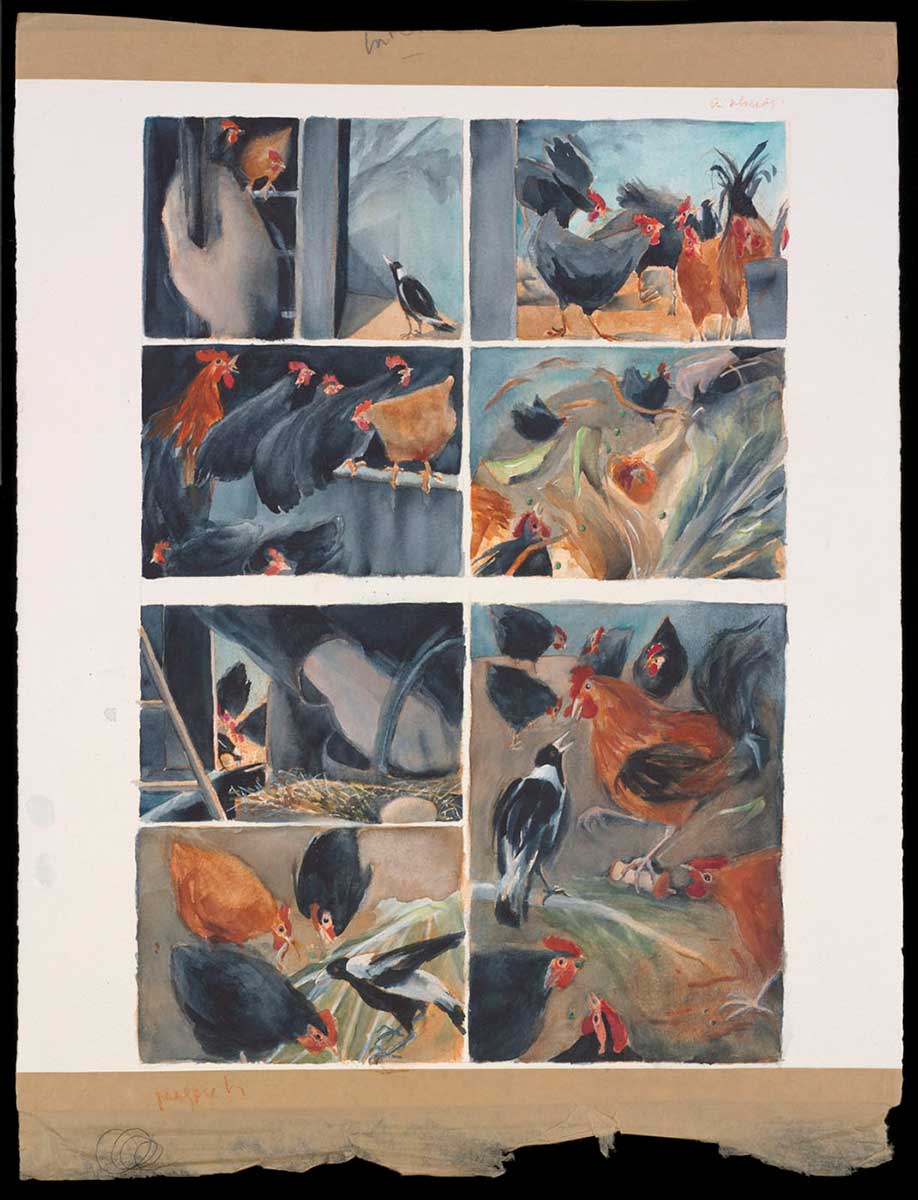 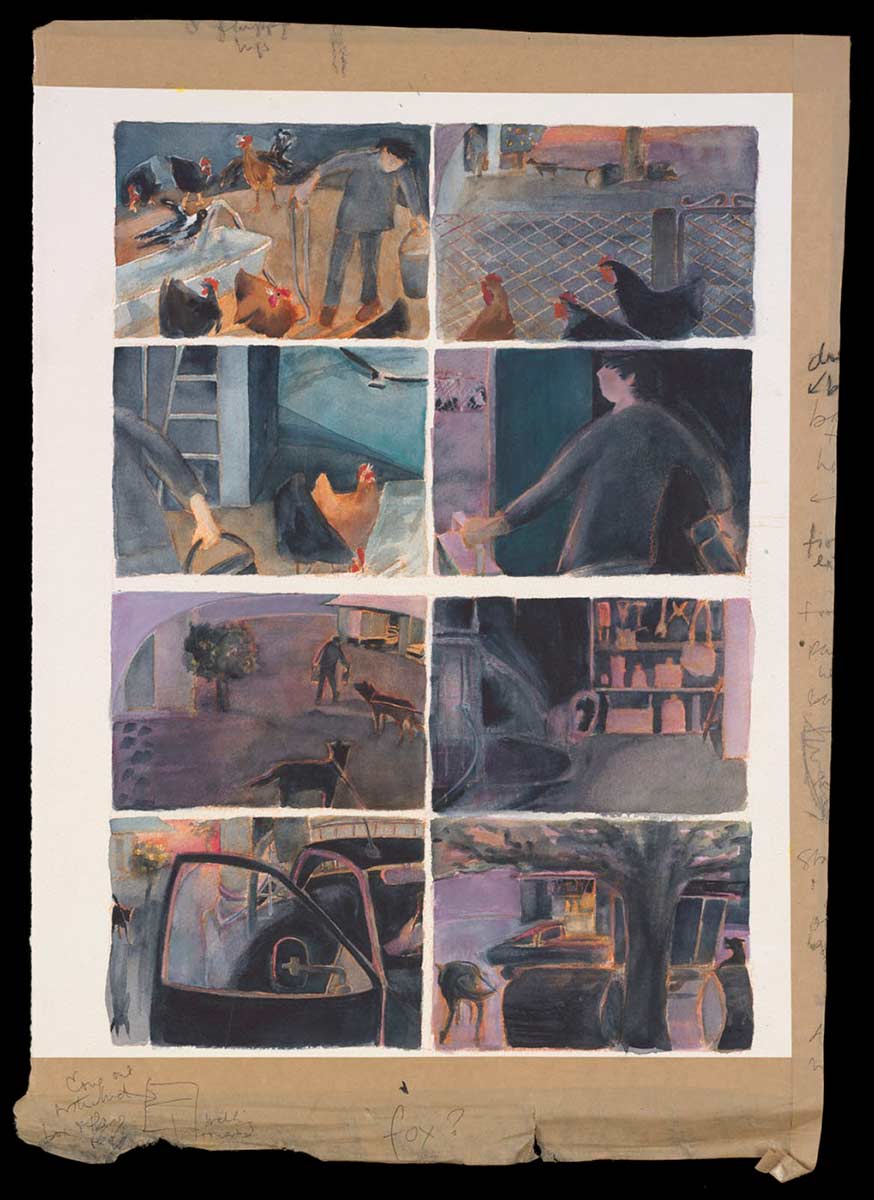 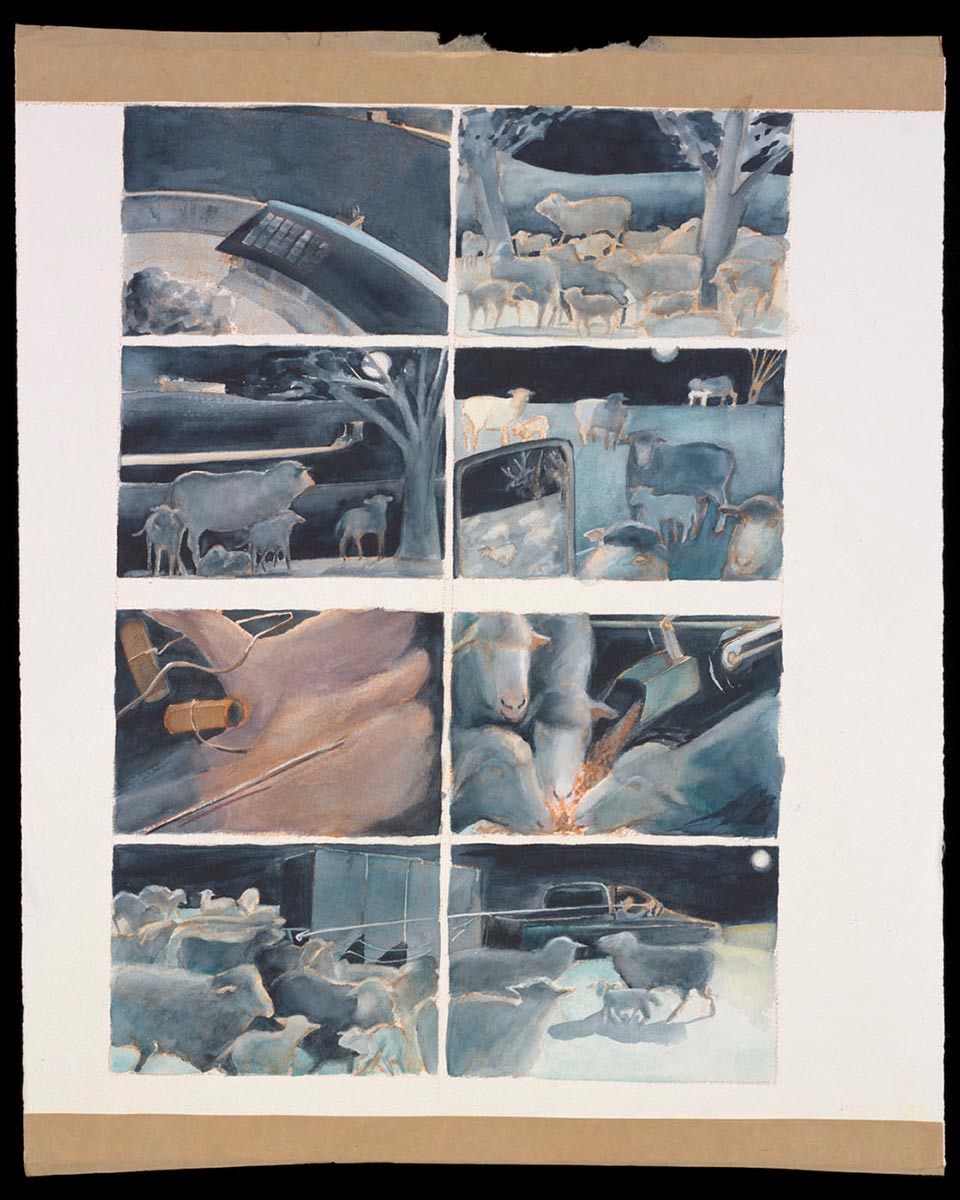 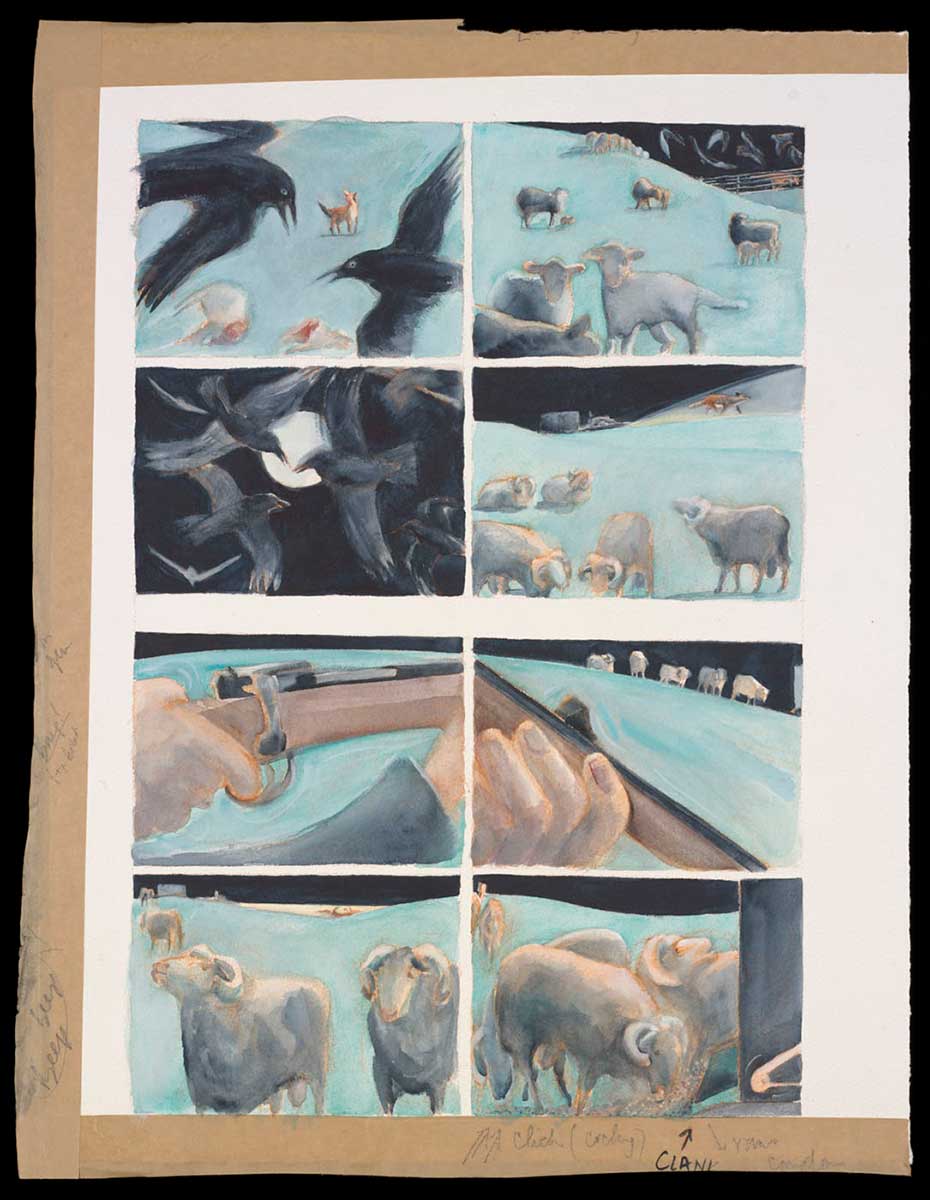 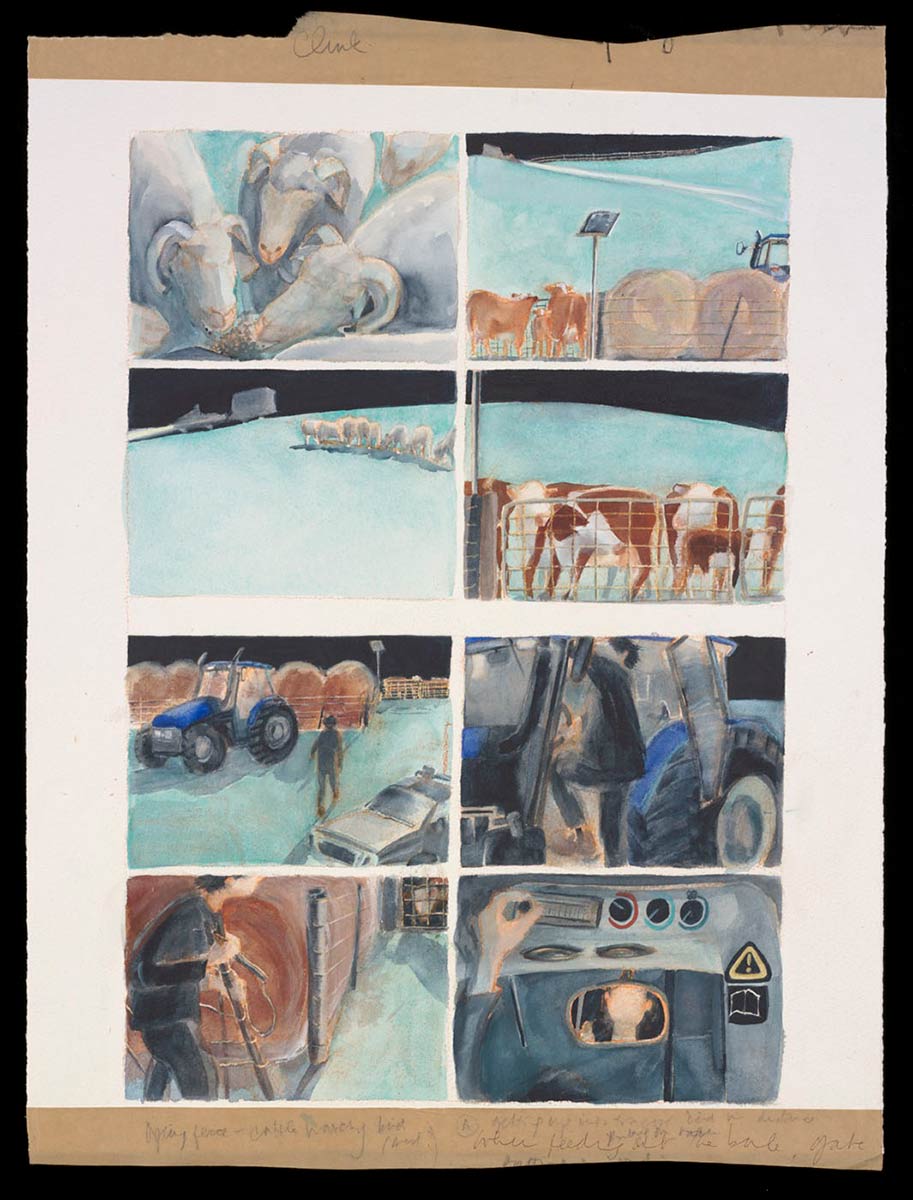 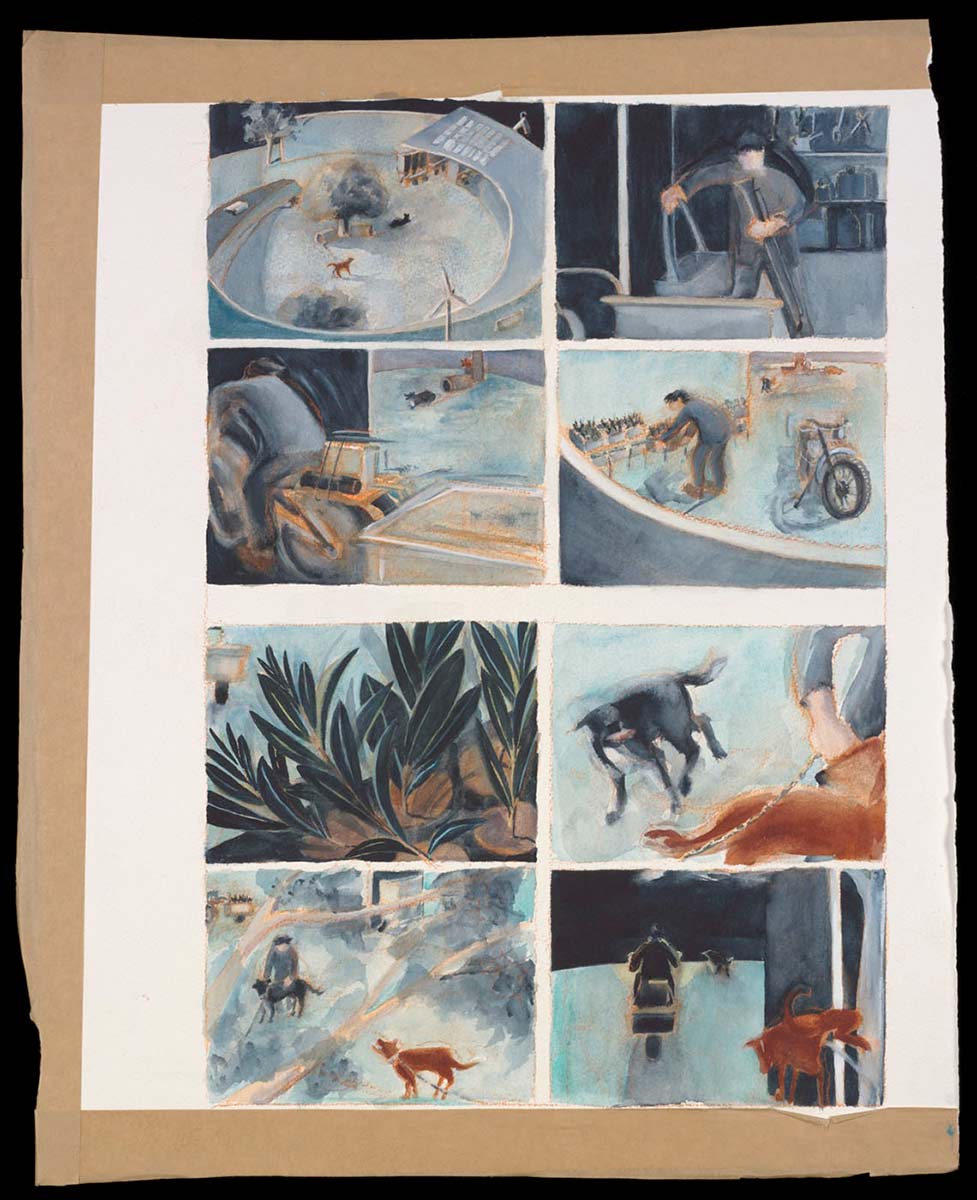 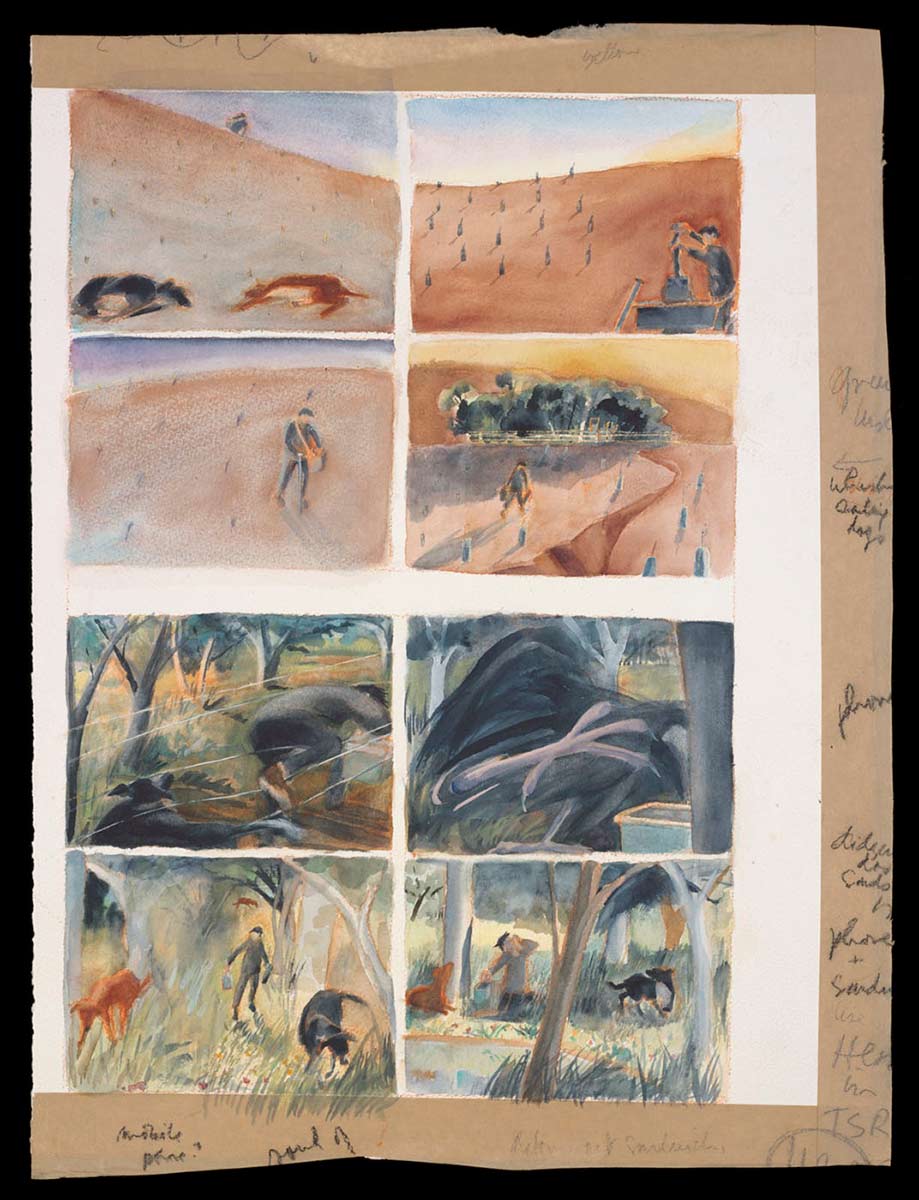 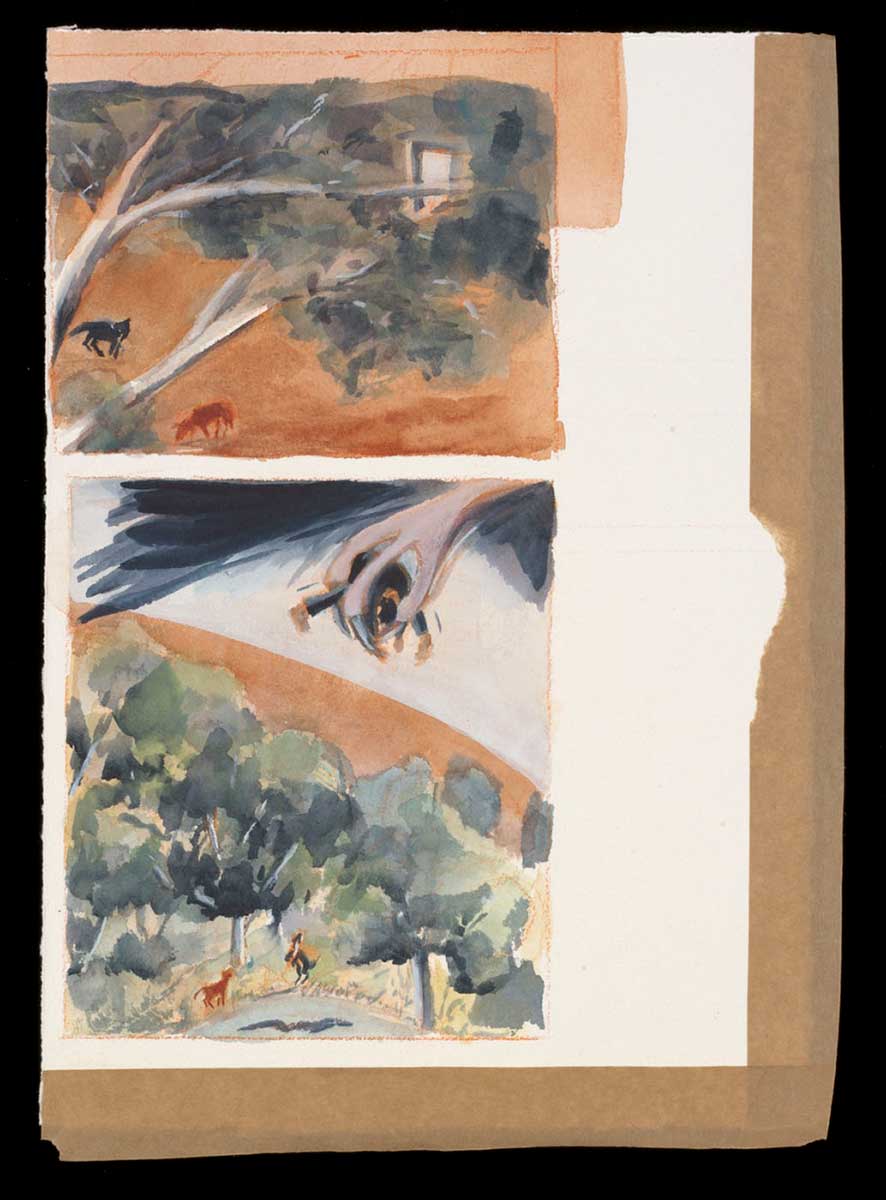 Homestead scenes and rain at night

A fox among the lambs

Tree planting before a rest in the reserve

Snatched away by a mysterious giant creature

Diana completed an Associate Diploma in Printmaking at the Canberra Institute of the Arts in 1988, and a Graduate Diploma in Painting at Monash University in 1997. Between 1987 and 2007 she regularly exhibited her artworks at regional venues and in Canberra.

Diana inherited her talents in botany and art from her parents. Her mother, a painter, encouraged Diana to draw and paint as a child. Her father was a keen amateur botanist.

The Museum's collection reflects Diana's skill in observing and recording ecological and social details and processes.

A series of annotated sketchbooks record the history of Diana's presence in the paddocks of Bobbara Creek, working with livestock, fencing and planting, sketching and noting bird calls.

In 2005 Diana drew and painted species she encountered on the Bobbara Creek Travelling Stock Reserve, a rare and diverse remnant of grassy box woodland near her farm. She wrote:

Spring 2005 will be remembered not only for its burst of post-drought activity, but also for its length. Just when we thought it was ending, more rain fell and the cycle started again. Early on the white-winged choughs started building their large mud nest, two trees down from the one they were in the year before.

A dusky woodswallow used the peeled back bark as an opportunistic nest, while a willy wagtail in the same tree briskly set to work for several days. I have seen how, with great care, two adults emptied their nest of five growing fledglings, placed them on the branch, and then worked non-stop for a whole day enlarging the nest. By nightfall they were all put back in again. Do they often miscalculate?

The National Museum's Diana Boyer collection records the imaginative and emotional responses of one migrant woman settled in a specific Australian place over the course of almost three decades.

In 2008 Diana spoke about the relationship between her migration and her art making:

I think that when you move, you have to find something that you can do that is meaningful to you, and that will in some way help you come to terms with where you are. Although Binalong is a very beautiful little place and a lovely part of Australia, I think I needed to understand why I was there.

A 1989 series elaborated a sense of connection between Diana and her family in Argentina, generated by the setting sun. At a particular time of year, Diana explained, the sun sets across south-east Australia just as it begins to rise in Argentina:

I am watching the sunset, through the kitchen window as I speak to my mother in Argentina. She can see the sunrise as she answers my call. When I rang to wish my grandmother a happy birthday, she said: 'Well, my dear, although I have reached one hundred years, you are living the day before I am.'

Perhaps it is not so important if one migrates from city to city but in the country, the sky becomes the point of reference. I was relieved to find the Southern Cross here as well.

Diana's work was also influenced by the relative absence of imagery showing women working on farms, and several of her works reflect this theme. The farmer in the Time Change animation is a woman.

Diana and Norman sold Bobbara Creek in 2007. The Diana Boyer environmental art collection was donated to the Museum in 2008.