The 111 medals from the David Allen collection document the history of agricultural shows and rural industries across Australia. They range in date from the mid-19th to the early 20th centuries and help to reveal the meanings settlers placed on agricultural and pastoral activities. 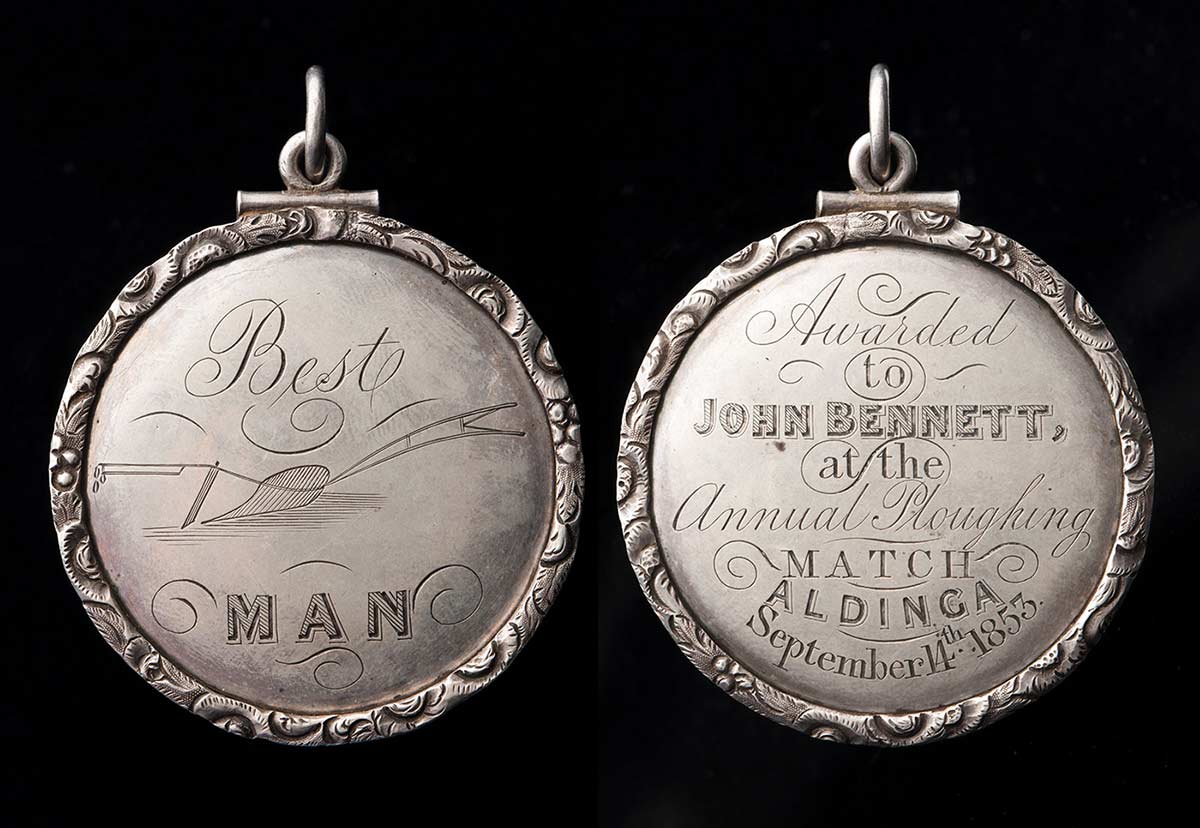 David Allen began working in the numismatic industry in 1971. He drew on his expert knowledge, contacts and access to a broad selection of medals to develop a large collection of rare and significant Australian agricultural show medals. This collection was offered for auction in 2011.

Although little is known of each medal's provenance prior to its acquisition by Allen, all but one of the medals purchased by the National Museum is inscribed with details of the awarding show society, class, date and recipient. This will help the Museum to gather precise and detailed provenance for each medal. 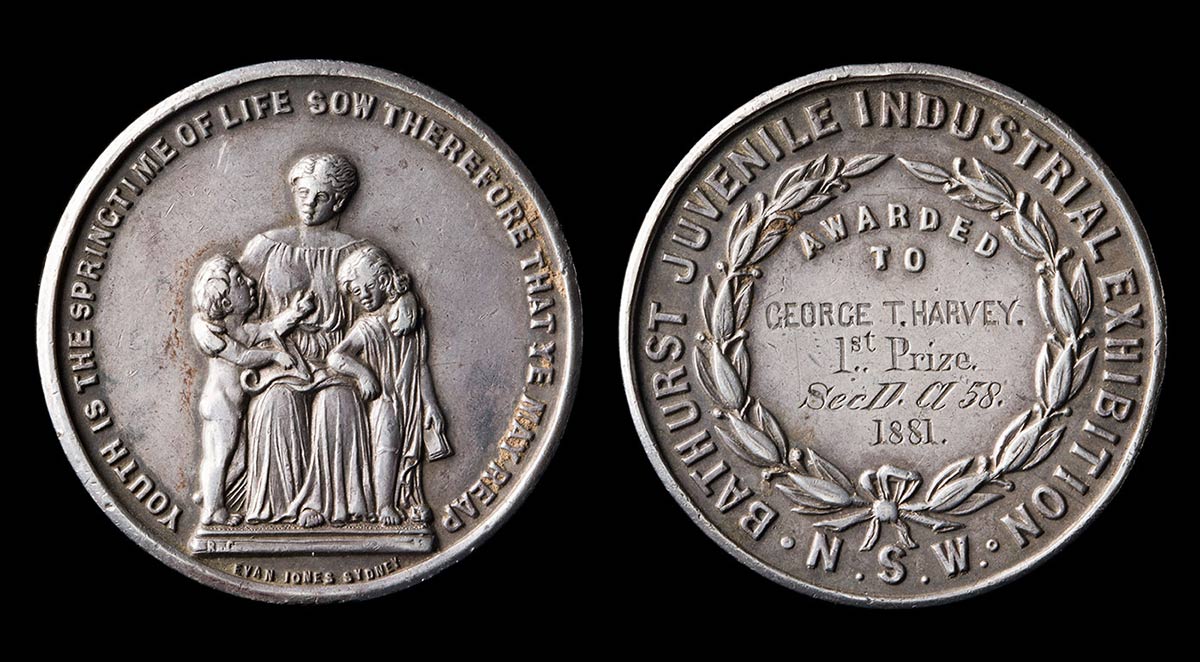 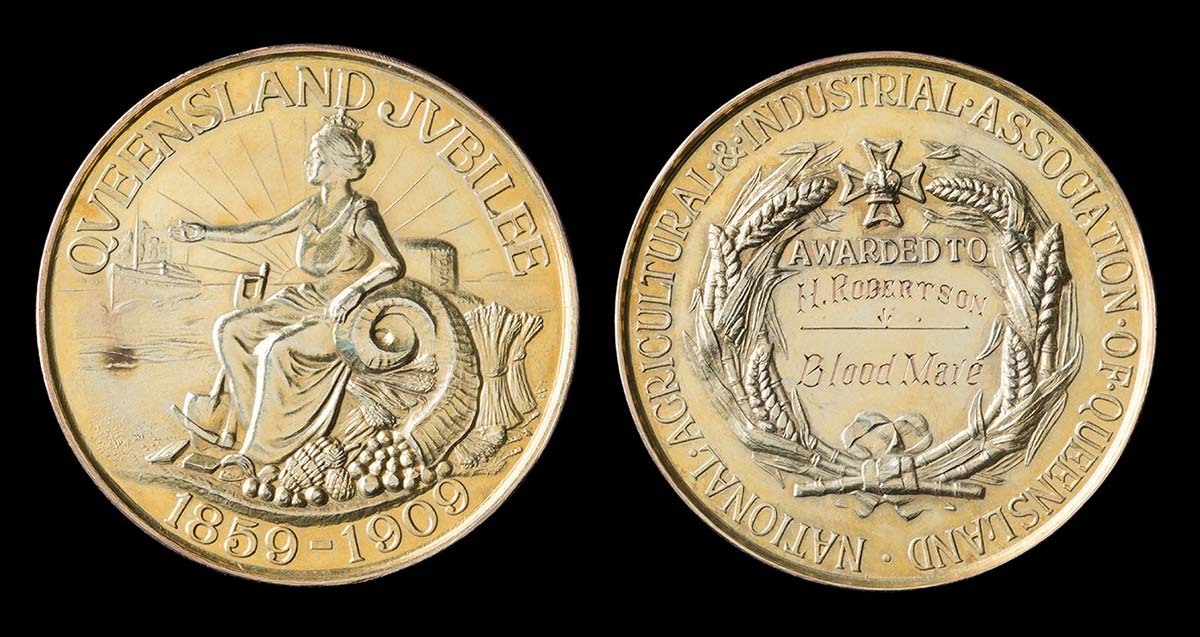 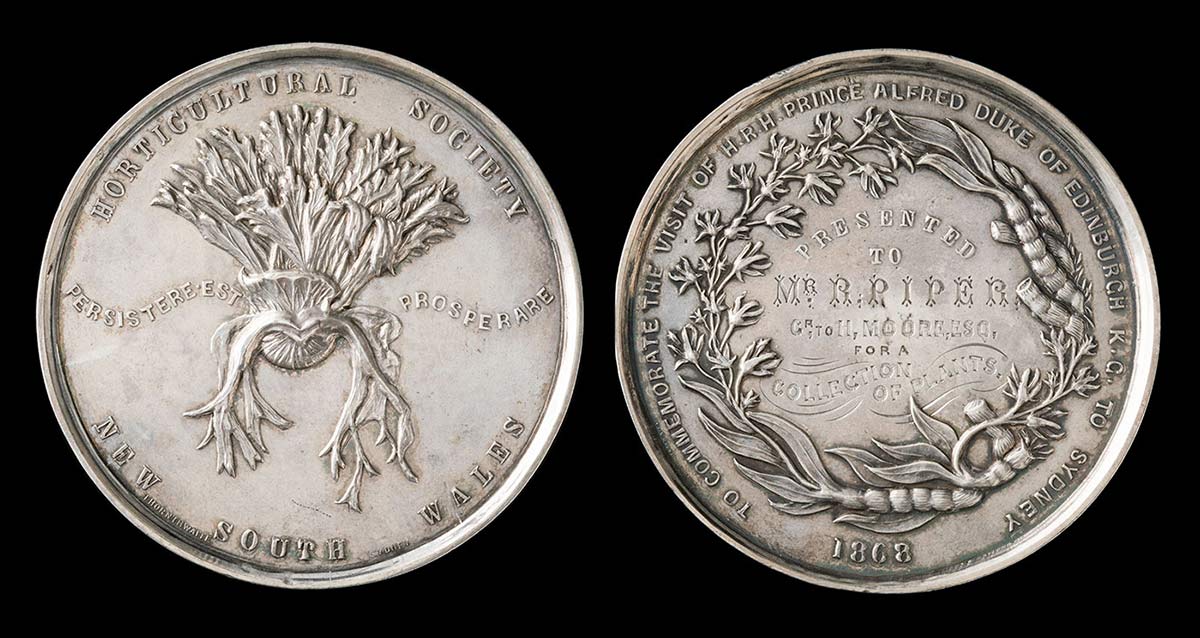 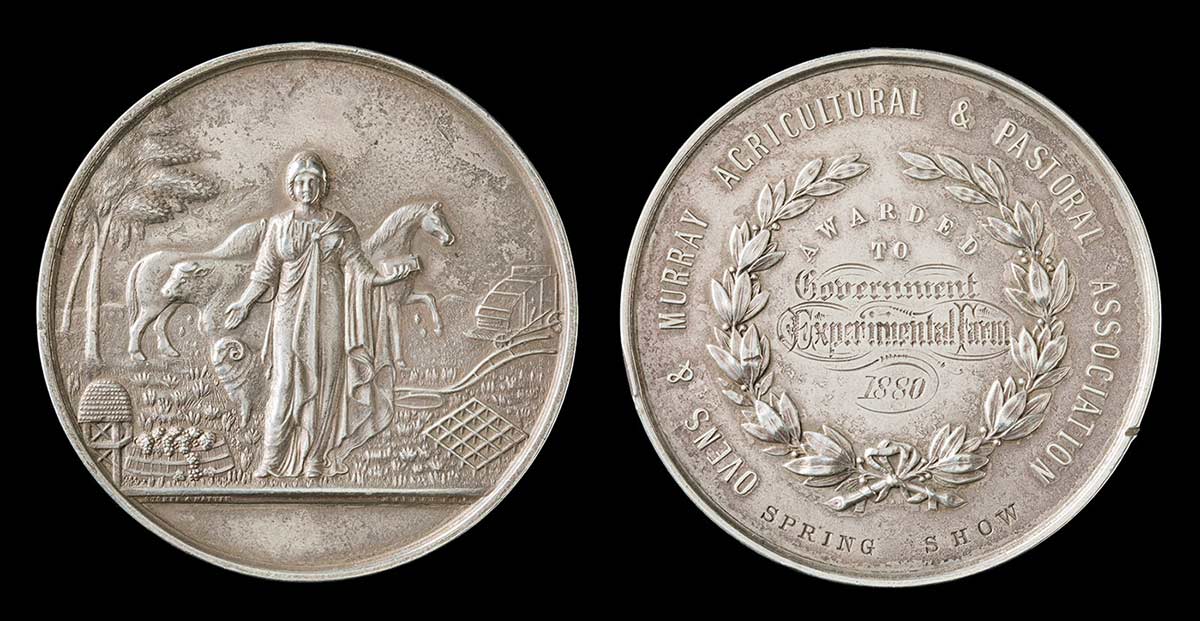 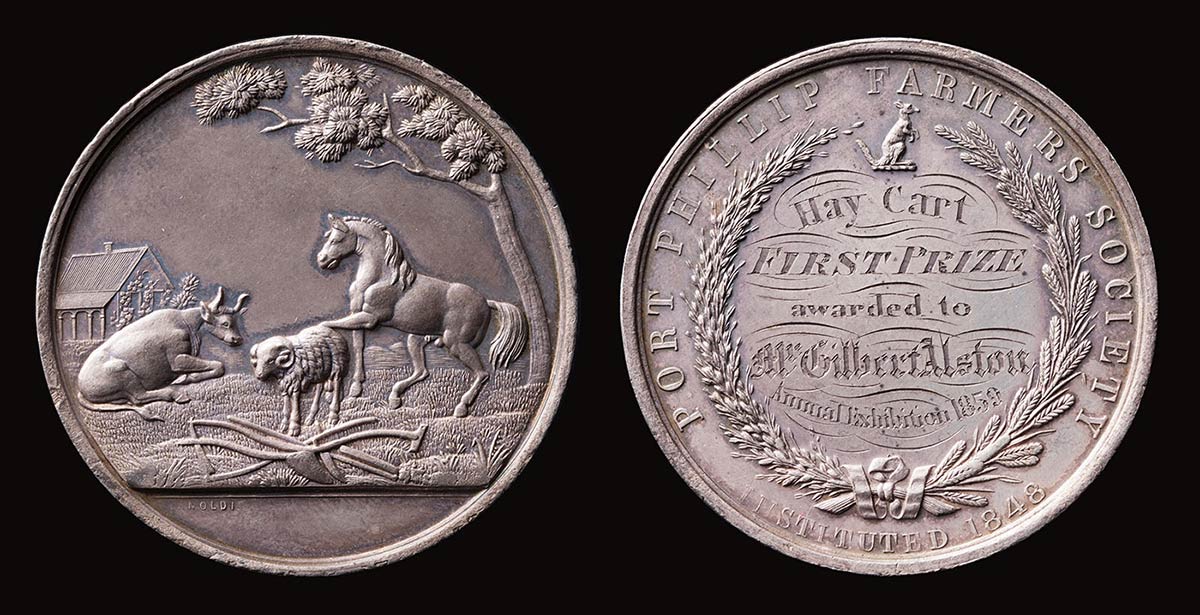 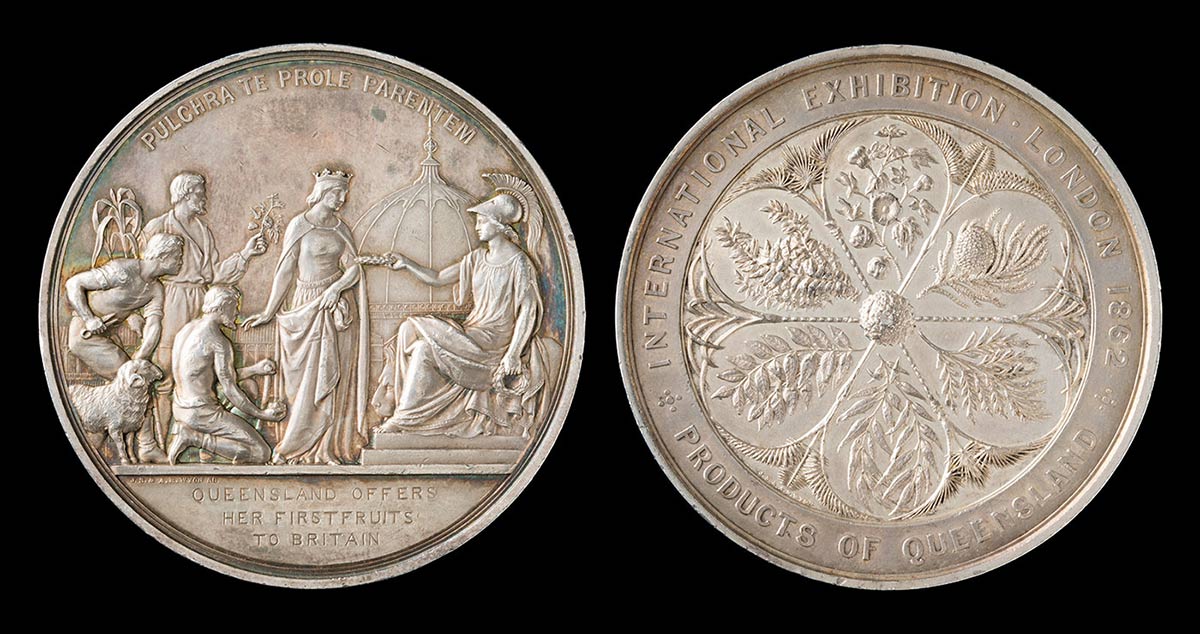 Many of the medals purchased by the Museum are associated with significant individuals and organisations, including those listed below.

The Port Phillip Farmers Society was formed in 1848 by a group of farmers on Moonee Ponds Creek. As gold-rush Victoria boomed, the society was the only body in the colony interested in the affairs of the farmer.

In 1855 the society convinced the Victorian government to make its first contribution to aid agriculture in the colony, an amount of 500 pounds to supplement the prizes as the annual show and ploughing matches.

It also successfully lobbied government to develop a Government Experimental Farm, which opened at Dookie in the Benalla district in 1877, and worked to convince government to establish a Board of Agriculture and contribute to various competitions to improve stock and crops.

The Australasian Implements Company was a significant South Australian based manufacturer of agricultural implements played a central role in the development of this industry during the late 19th century as Australia's wheat production boomed.

These medals are strongly related to the Museum's existing Sunshine Harvester Works holdings. The Australasian Implements Company was one of several South Australian companies involved in the escalation of the 1911 Sunshine strike from a state to a national industrial action.

John Buncle (about 1822–1889), owner of a thriving agricultural implements and machinery manufacturing business, and president of the Melbourne Chamber of Manufactures, was an enthusiastic supporter of intercolonial free trade and Federation.

Gilbert Alston (1826–1908), a blacksmith from Bulla Bulla, Victoria whose bluestone cottage is listed by the National Trust of Victoria.

Joachim Matthias Wendt (1830–1917), an Adelaide watchmaker and jeweller. He produced a series of presentation caskets for the Duke of Edinburgh's visit in 1867, and his work, at its best, is regarded as some of Australia's finest 19th century silversmithing.

Agricultural and industrial associations formed across Australia in the 19th century to foster the development of modern farming systems by promoting new scientific and technological methods.

The annual show emerged as a key arena in which the hard work and skill of primary producers was acknowledged and rewarded. For rural families, shows also served a significant social function, providing a venue and regular occasion to gather and develop and celebrate community ties.

Kate Darian-Smith and Sara Wills in their 1999 book Agricultural Shows in Australia: A Survey found that modern rural agricultural shows continue to participate in establishing systems of value for breeding stock and remain important social events for country families. Urban shows have emerged, and are now marketed as rare opportunities for city dwellers to engage directly with rural life and food production.

Almost from their inception, agricultural and industrial associations awarded prizes for class winners at shows. Initially these were inscribed medals and cups. Later they were more often rosettes and ribbons. These awards record the histories of classes and recipients, the spread and character of rural activities, and the broader cultural purposes of agricultural shows.

Show prizes like these medals feature diverse representations of industrial equipment and rural produce, characterising agricultural activity as a process of generating wealth and prosperity by making Australia’s difficult and unfamiliar environments fruitful and productive.

They include images of ploughs, steam engines, wheat sheaves, fat lambs, mining sites and beehives, often teamed with allegorical figures representing progress, and inscriptions such as ‘Speed the Plough’ and ‘Sow therefore that ye may reap’.

They help to reveal the meanings settlers placed on agricultural and pastoral activities, as their work connected Australian rural places to continental and global networks of industry and trade.