A 13-metre high windmill which stood on Kenya station in central Queensland for more than 80 years helps to tell a story of graziers extending their operations into drier areas of Australia. 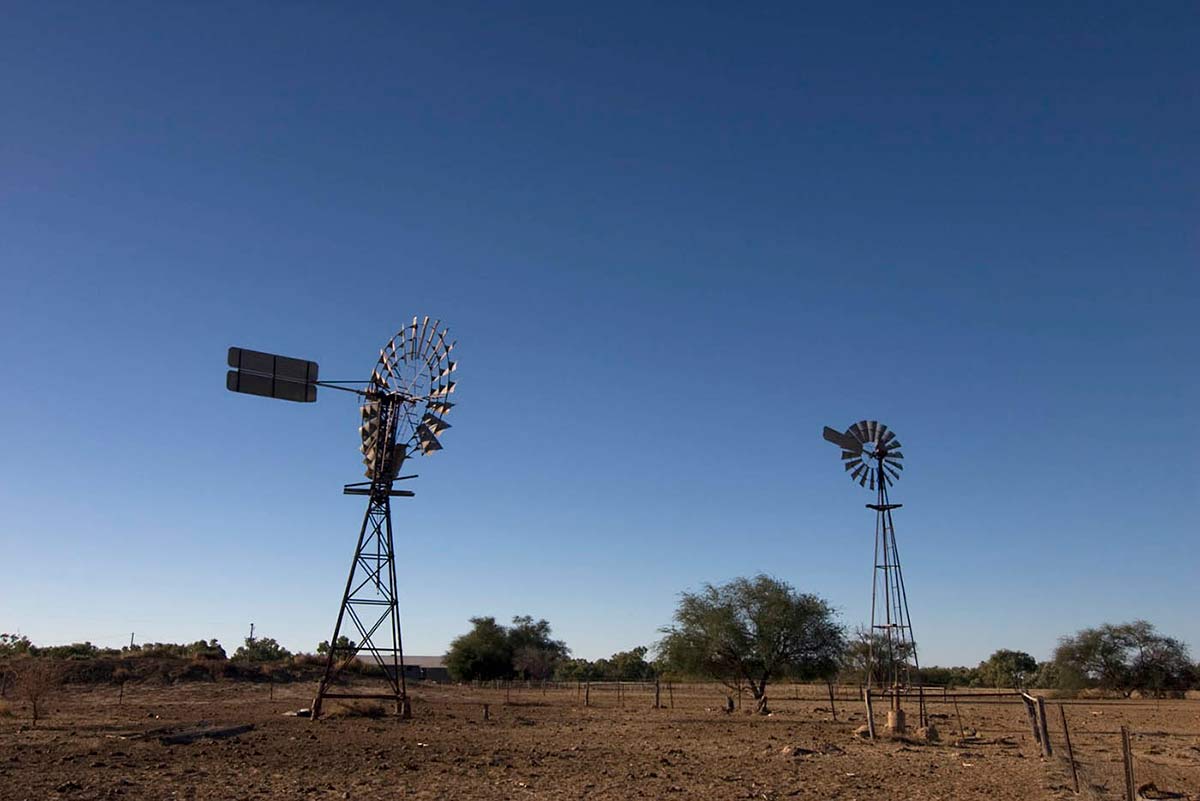 The Simplex windmill, right, as it stood on Kenya station for more than 80 years

This Simplex windmill was made by the Intercolonial Boring Company in Brisbane in the 1920s. It provided water for stock on Kenya until 1988, when a new and deeper artesian bore came into service.

The windmill is now part of the National Museum's National Historical Collection. It was donated by John and Pamela Seccombe and taken apart on Kenya before being moved 1760 kilometres to Canberra.

Giant of the outback. A windmill from Kenya station 7:01

Third generation grazier John Seccombe outlines the history of the Simplex windmill and describes his delight at its life beyond Kenya station, as part of the Museum's collection. Edited captions to come.

The Simplex windmill stood on Kenya station, near Muttaburra, and north-east of Longreach in central Queensland. Kenya was originally part of Kensington Downs, a property which neighboured Bowen Downs.

Bowen Downs was the first pastoral lease to be taken up in the Mitchell pastoral district. In the 1860s pioneers William Landsborough and Nat Buchanan secured land along the Thomson River after forming a partnership with Scottish Australian Investment Company manager Robert Morehead, sub-manager Mathew Young, and Landsborough's friend Edward Cornish.

The district features vast and grassy plains and intermittent waterways. In the early days the grazing of stock was confined to creek and river frontages.

In the late 1880s engineers discovered abundant supplies of artesian water in the Great Artesian Basin, deep below the rolling downs.

The basin is the largest artesian groundwater basins in the world. It covers an area of more than 1.7 million square kilometres, or about one-fifth of Australia, from Cape York in Far North Queensland, to Dubbo in the south.

When engineers tapped into the basin, water flowed endlessly from bore heads into drains snaking across the open plains. A myriad of new opportunities opened up for pastoralists.

The sinking of artesian bores represented a vigorous and successful attempt by graziers who used new technology to extend their operations into drier areas.

Shareholders of the Scottish Australian Investment Company learned in 1891 of successful efforts to find artesian water on Bowen Downs:

The subject of Water-boring has been mentioned several times, and I am glad to say that, so far, what we have done has been very successful. You will see by the Report that at Bowen Downs we have been very fortunate. We have three bores down that are producing a large quantity of water, we are now putting down a fourth, and the latest accounts show that this fourth boring is down 200 feet ... You will readily understand what an enormous benefit these sources of water are to us in every way. They supply the dams and rivulets through a long course of country, and they make large areas, which would not otherwise be so, available for pastoral purposes.

Landholders installed windmills to draw underground supplies to the surface in areas where the Great Artesian Basin did not extend.

Fan wheeled windmills were first designed and built in Britain during the 18th century. The first commercially produced windmills used in Australia were imported from the United States, where companies had been making and selling mills for pumping water since the middle of the 19th century.

Australian made windmills appeared on the market from the 1870s. The Intercolonial Boring Company, manufacturer of the Simplex, began making windmills in Brisbane around this time.

Late in the 19h century, and throughout the 20th century, windmills allowed pastoralists to graze livestock in areas previously limited by dryness.

The Simplex windmill, now in the Museum's collection, drew water from McLauchlin's bore on Kenya station from the 1920s.

Donors John and Pamela Seccombe's family have a long connection with Kenya. John's great uncle and aunt Claude and Georgina acquired and named the land in a Queensland government ballot in 1929.

John explained that the Queensland Government introduced the ballot system after the First World War, as part of a scheme to promote closer pastoral settlement. Successful applicants paid only the value of fixed improvements. Kenya had few: no homestead, only two paddocks, some sheep yards, and the windmill and bore.

The windmill provided water for stock until 1988, when a new and deeper artesian bore came into service. The Seccombe family were moving out of sheep and into cattle. Cattle needed more water than the older windmill technologies and shallow bores could supply. Also, the casings on McLauchlin's bore were rusting through and in need of replacement.

The Seccombe family had watched the old windmill slowly fall apart since it was decommissioned. A summer storm blew away some of the sails and to preserve the historic structure, the Seccombe's sought to donate the windmill to a museum.

The National Museum acquired the windmill in 2009. Longreach windmill contractors Brian Rose and sons dismantled the mill and it was transported 3,500 kilometres to Canberra. The Roses have a long association with windmill contracting in central Queensland and Brian thinks his grandfather may have erected the Kenya mill.

Conservators re-assembled the windmill in a National Museum laboratory to explore preservation options and prepare the six-metre wide sail for display in the Landmarks gallery in 2011.

This mill turns clockwise, as do the more common Southern Cross windmills.

Reassembling the top of the Kenya station windmill

The development of the Australian pastoral industry at Bowen Downs in Central Queensland, one of four places to be featured in the ‘Never enough grass’ module of the National Museum’s Creating a Country gallery, is outlined by curator George Main.
Open player in a new tab
Presenters: George Main
Tags:
00:00 / 57:08
Facebook
Twitter
Pinterest
Messenger
Email