Jack Howe was a shearer whose feats in the sheds of central Queensland made him a legend. In 1892, Howe sheared 321 sheep in one day using hand shears – a record that still stands today.

This mechanical handpiece was presented to Howe by the Wolseley Sheep-Shearing Machine Company in January 1893. It acknowledged Howe's October 1892 record for machine shearing, of 237 sheep shorn in a day using the new technology. 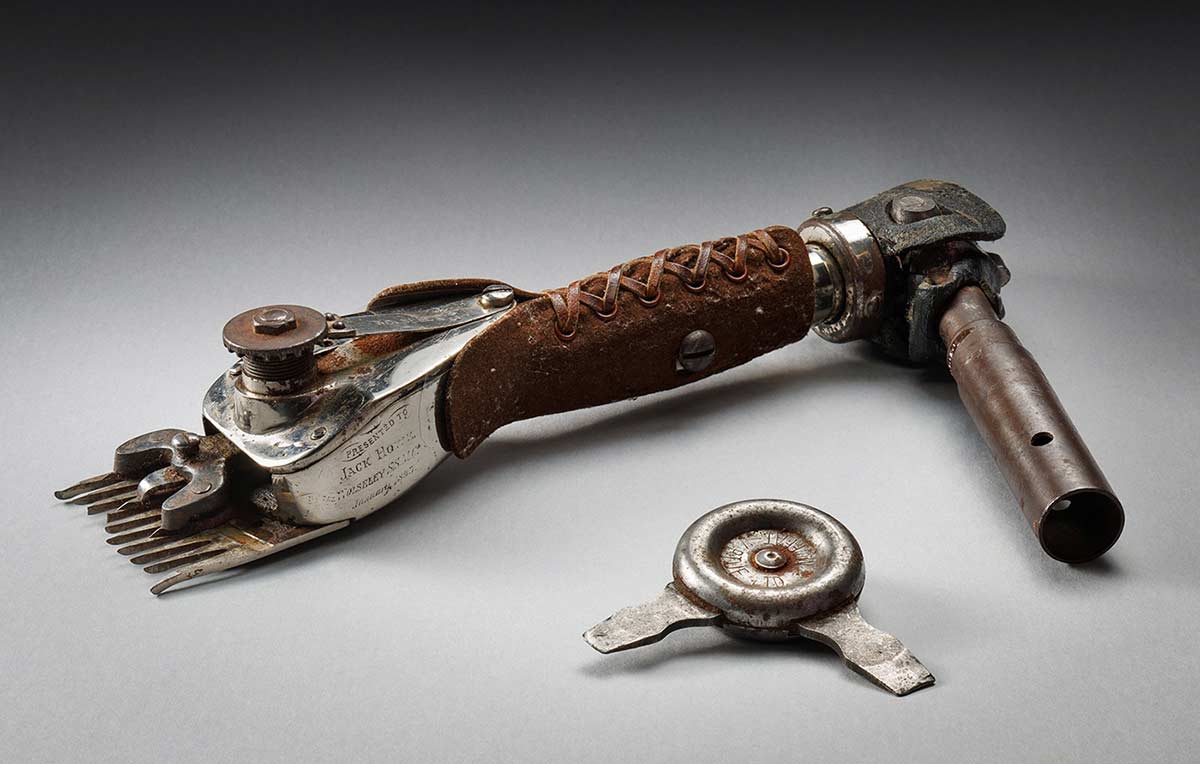 John Robert Howe was born in Warwick in southeast Queensland in 1861. Known as Jack or Jackie, he worked as a shearer and settled in the Blackall district of central Queensland. He became famous, a gun shearer, setting records that stood for decades.

Physical descriptions paint Howe as a giant of a man, with hands the size of small tennis racquets and wrists as strong as steel. He set records even when other shearers tried to distract him, by tickling him or jumping on his back. His presence in a shed was said to lift tallies far above normal, as men tried to compete with him.

At Alice Downs station in Queensland in October 1892, Howe sheared 1437 sheep in a week. A few days later, he broke another record, shearing 321 sheep in seven hours and 40 minutes.

Howe performed both feats using blade shears and, despite the introduction of machine shearing technology, his record tally of 321 sheep remained intact until 1950.

In the same 1892 season, Howe also broke the record for machine shearing at Barcaldine Downs, where he sheared 237 sheep in one day using the new technology.

Howe's record-breaking tallies earned him two gold medals. Coleman and Sons, a eucalyptus distillery in Cootamundra, New South Wales, had previously announced it would award a gold medal worth more than £10 for the highest tally of hand-shorn sheep, and a gold medal valued at over £5 for the largest tally shorn by machine.

When Howe quit shearing in 1900, he became a publican and owned hotels in Blackall and Barcoo.

He had been an active member of the Shearers’ Union and he continued to advocate for workers’ rights as a member and president of the Blackall Workers’ Political Organisation. He was also a member of the fledgling Australian Labor Party. Howe died in 1920, aged 58.

The shears awarded to Howe by Wolseley remained in the Howe family until they were sold to the National Museum at auction in 2013.

New technology and the Wolseley machine

Shearing by hand was a lengthy and arduous process that required great skill.

Many pastoralists dreamed of a machine that could remove the fleece from a sheep quickly and efficiently, without having to rely on skilled labour.

Born in Dublin, Frederick York Wolseley migrated to Australia in 1854. He worked on and later owned sheep stations in New South Wales, and experienced the problems of blade shearing firsthand.

Although he was not the only one to experiment with a sheep-shearing machine, he was the first in Australia to manufacture a commercial one.

The Wolseley Sheep-Shearing Machine Company Limited was established in Sydney in 1887 before transferring to England in 1889, first to London then later to Birmingham.

Wolseley remained as managing director until his retirement in 1894.

Frederick Wolseley was a great promoter of his shearing machine, and the company had a strong presence at agricultural shows. Throughout 1892, the year Jack Howe set his records, rural newspapers published the tallies from shearing sheds equipped with Wolseley machines.

There was a rumour that Wolseley had offered Jack Howe £12 a week plus expenses to demonstrate the machines at the Chicago World's Fair. This did not come to fruition but, in recognition of Howe’s achievements, the company presented him with these shears in January 1893. They have been well used.

Mechanical shears presented to Jack Howe by Wolseley Sheep Shearing Machine CompanyThis mechanical shearing handpiece was owned by record-holding shearer, Jack Howe. John 'Jack' Howe was born in 1861 near Warwick in Queensland. Physical descriptions of the period painted him as a giant of a man, with hands the size of small tennis racquets and wrists as strong as steel. He set records even while other shearer...