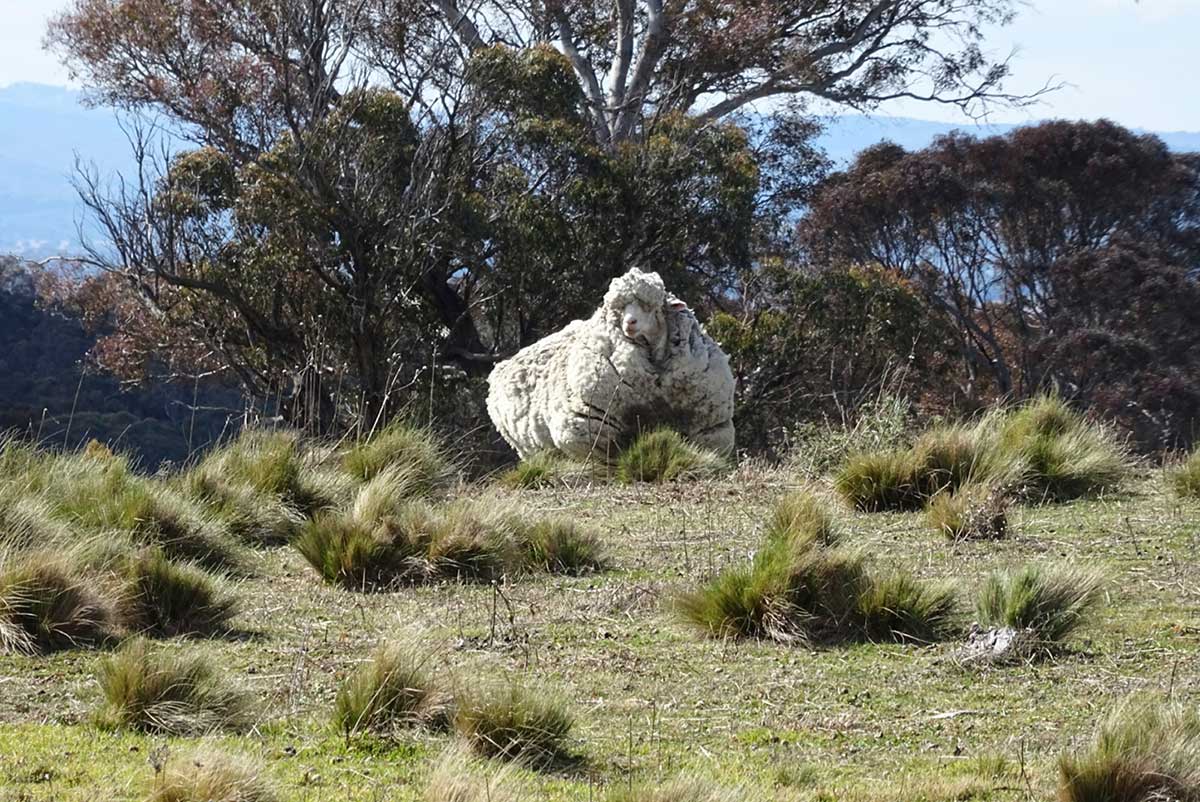 Chris the sheep where he was found at Mulligans Flat in northern Canberra, 2015

A merino sheep fleece that set a record as the world’s heaviest is part of the National Museum of Australia’s collection. The RSPCA ACT donated the 41.1 kilogram fleece from a wether named ‘Chris’.

In August 2015 personal trainer Sue Dowling, who was walking on the outskirts of northern Canberra with a client, noticed a sheep with a heavy fleece in a nearby paddock. They dubbed the merino Chris after ‘Chris the unhappy sheep’ from the British comedy series Father Ted.

When she noticed Chris wasn’t moving, Dowling called the RSPCA, who rescued Chris and took him to the Weston shelter.

The significant weight of Chris’s fleece meant that he was weak and having difficulty walking, and had become slightly bow-legged.

It is likely Chris had only weeks to live, as he would soon have become unable to move, and been left starving, suffering heat stress in the approaching warm weather, vulnerable to predators like foxes and dogs as well as parasites and potentially severe flystrike.

Veterinarians recommended that Chris have his fleece removed as soon as possible. Because of concerns about shock, he was sedated, and then shorn by Australian champion shearer Ian Elkins. Once the fleece was removed, it became clear that Chris had skin infections from the urine and compacted faeces in the wool.

The ‘world’s woolliest sheep’ was an international media story. Chris’s fleece was recognised by the Guinness Book of World Records as the world’s ‘heaviest sheep fleece’, breaking records previously set in New Zealand.

Modern domesticated sheep raised for wool have been bred not to lose their fleece, as wild sheep do. If the fleece isn’t cut off, it will continue to grow. Based on the length of Chris’s wool, it is estimated he had gone without shearing for at least five years.

It is not known how Chris came to be living without human care. He had been de-sexed, and had markings. Several farmers from New South Wales and around Canberra came forward to claim him but none could match his markings. Who owned him remains a mystery.

After recovering at the RSPCA, Chris was adopted, and in 2016 was living on a farm in New South Wales. He died in October 2019.

The fleece taken from Chris was damp, dirty, smelly and showed evidence of insect activity. It needed treatment so it could be preserved and displayed.

The fleece was carefully packed and placed in a freezer. Due to the density of the fleece it took days before it was fully frozen. After the fleece was kept frozen long enough to kill any insects, it was dried in a vacuum freezer. The fleece was then laid out to plump up again ready for display.

Fleece from 'Chris the sheep'The RSPCA ACT collection consists of a fleece shorn from Chris the Sheep, a medium-wool merino rescued from paddocks near Mulligan's Flat in the Australian Capital Territory carrying more than 5 years' growth of wool. When Chris was shorn the resulting fleece weighed 41.1kgs, a new Guinness World Record for 'heaviest fleece'. Th...
On display

Images of Chris being shorn on the ABC website

The Misadventures of Chris the Sheep children's book