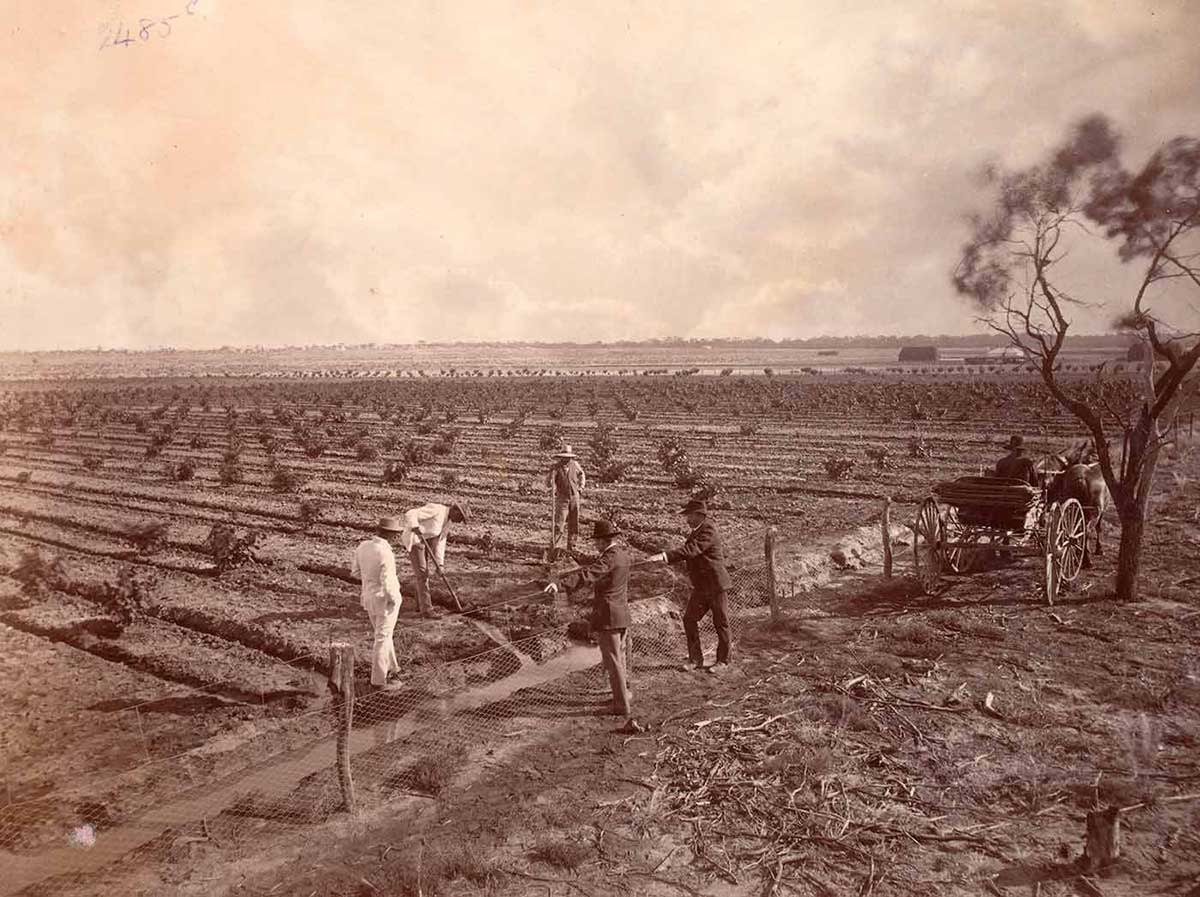 In 1884, after a series of series of droughts, the Victorian Government began investigating large-scale irrigation.

The Chaffey brothers had built a successful irrigation colony in California before deciding to investigate Australia’s potential.

In 1887 the Chaffeys started building Australia’s first ‘irrigation colony’ at Mildura and Renmark on the Murray River.

The first harvests in the mid-1890s were exceptionally good but by 1896 the Chaffeys’ Mildura Irrigation Company was in liquidation and hundreds of settlers faced foreclosure.

It is felt that the very exceptionally desirable and advantageous conditions of colonial settlement that are here offered will be sure to attract people of the right sort, namely the industrious, temperate, thrifty, intelligent, skillful and good living of all classes.

From 1877 to 1884 Victoria suffered a series of debilitating droughts, so water supply was a key area of government interest.

In 1884 the Victorian Government appointed the future prime minister Alfred Deakin, who took a genuine interest in these matters, as Chairman of the Royal Commission on Water Supply and Irrigation. In this role, he travelled to Italy, Egypt and South Asia to study irrigation systems.

But it was his 1885 trip to the western United States that helped initiate great change in Australian agriculture. In California he met the Chaffey Brothers – two Canadian entrepreneurs who had created an ‘irrigation colony’ on the arid Cucamonga plains near Los Angeles.

Enticed by Deakin’s reports of the irrigation potential in Australia, George Chaffey arrived in Melbourne in February 1886.

From there, he travelled to the northwest of the colony along the Murray valley and became enthusiastic about the river’s irrigation potential.

Deakin, who believed that irrigation represented the future of Australian agriculture, assured him the government would make available 250,000 acres at reasonable rates.

Mildura and the Sunraysia region

George Chaffey contacted his brother William in California and convinced him to sell their interests in America and join him in Australia. George then selected a derelict sheep station at Mildura as the centre of their first irrigation settlement.

In October 1886 the brothers signed an agreement with the Victorian Government guaranteeing the Chaffeys would invest £300,000 in the area that would later become known as Sunraysia over the next 20 years.

But in November 1886 a Bill introduced to the Legislative Assembly to authorise the agreement was vehemently opposed with the Chaffeys being described as ‘cute Yankee land grabbers’.

Eventually the Bill was amended to invite other parties to submit tenders for the project.

Work begins in Renmark and Mildura

Meanwhile Sir John Downer, Premier of South Australia, came to Melbourne to meet the Chaffeys and offered them 250,000 acres of Murray riverfront in his state.

The brothers took up the offer and selected an acreage in the Renmark area.

By May the Victorian Government had received no other tenders for the Mildura project and so the brothers decided to buy the land and move ahead with what was now a 500,000-acre project.

The brothers got to work laying out irrigation channels and the streetscapes of Mildura and Renmark.

A large land sales program, including the publication of The Australian Irrigation Colonies, to attract settlers ran in Australia and Britain and. December 1890, 3,300 people lived in Mildura and 1100 in Renmark – about half of them new British immigrants.

The Chaffeys adapted plans and systems from their American enterprises to the Australian site. They developed a series of steam-driven pumps to raise water 28 metres up from the Murray River, first into King’s Billabong, then into a series of channels to irrigate the 33,000 acres initially laid out.

Disputes and decline in the Murray River basin

The first harvests were abundant but almost immediately disputes about water rights, land boundaries and the relationship with the Chaffeys’ Mildura Irrigation Company erupted among the settlers.

As long as the Chaffeys had money coming in from the sale of their land the situation was manageable, but as the 1893 recession set in across Australia their real estate revenues dried up and quarrels among the settlers became political.

BC Harriman, formerly of the Crown Land Department, informed the residents that the Mildura Irrigation Company’s practices were illegal and the settlers’ complaints were brought before the Victorian Parliament.

The respected water engineer Stuart Murray was tasked with investigating the grievances. He discovered that some complaints were valid and this finding was enough to push the government to set up the Mildura Irrigation Trust, which took over responsibility for the project. On 10 December 1895 the Chaffey brothers company went into liquidation.

The first generous harvests proved to be a false promise for the early orchardists. Harvest yields stabilised but there were problems in transporting the fruit to market as there was no rail connection. The settlers relied on river boats to transport the crop, but in 1893 the Murray River dropped to record low levels and the harvest was stranded.

In the same year, the great bank crash of 1893 sent the country into a recession and the promised rail link to Melbourne and Sydney was put on hold. When the Chaffeys went into liquidation the banks foreclosed on hundreds of local farmers.

At the same time, the salinity problem that still plagues the Murray River basin emerged, whereby increased water flows from irrigation brought shallow salt deposits to the surface and reduced the soil’s fertility.

Resurgence of the Sunraysia district

George Chaffey returned to the United States but William stayed in Mildura. He was becoming a stalwart of the community and helped the Sunraysia district become what some have described as the 'fruit basket of Australia'.

By 1903 the long-promised rail link finally arrived in the region and banking had stabilised, the Mildura Irrigation Trust was competently managing the irrigation system, and plans to control the salinity problem were underway.

Despite limited success in its early years, the Chaffey’s project was the first large scale irrigation scheme undertaken in Australia and became the model for others around the country.