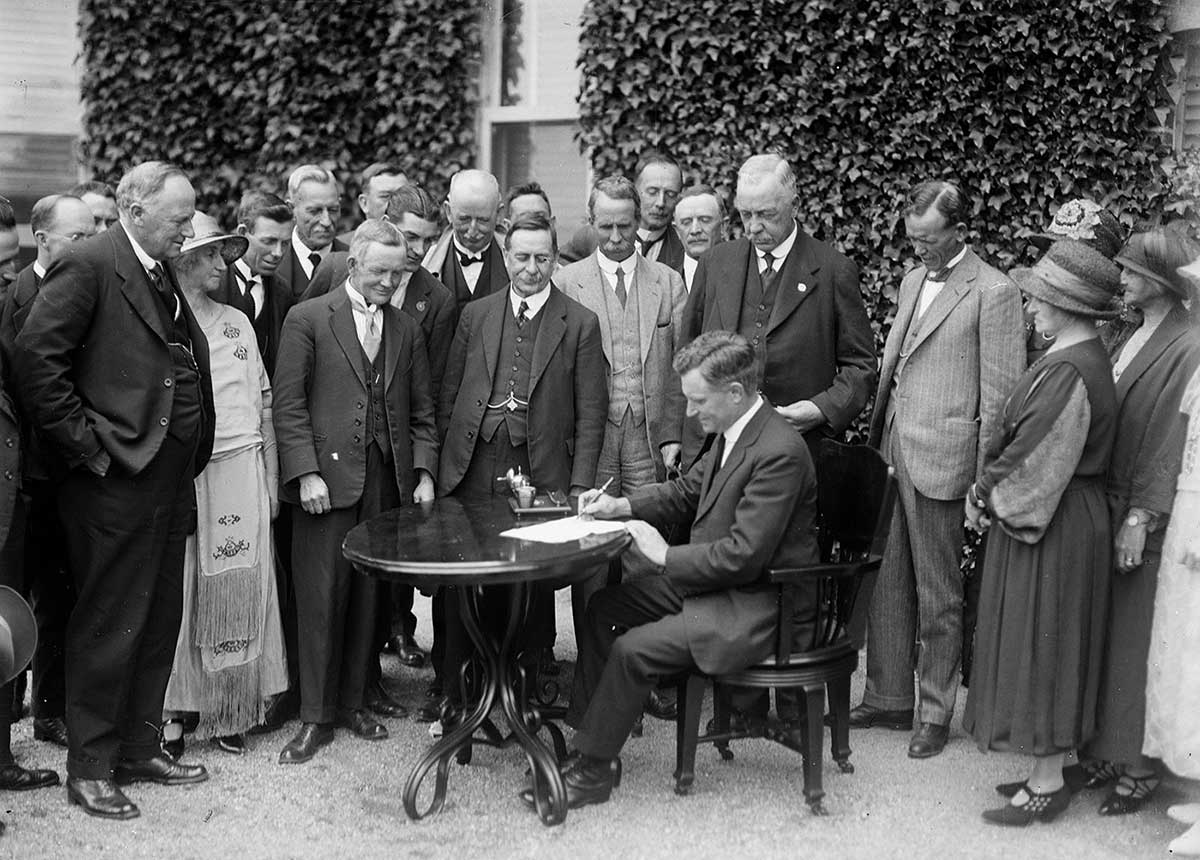 The Country Party was founded in 1920 by a group of state-based Country Party members who had been elected to federal parliament the previous year.

In the next federal election, the party gained 14 seats and the new party secured the balance of power. They aligned themselves with the Nationalist Party – the forerunner of today’s Liberals – a coalition that has continued to this day.

Since the 1920s, the party has championed the rights of the nation’s rural population and forced all other political parties to pay greater attention to the development of rural Australia.

The most important thing is that we have a total national concept of the Australian need. … So we conceive our role as a dual one of being at all times the specialist party with a sharp fighting edge, the specialists for rural industries and rural communities. At the same time we are the party which has the total co-ordinated concept of what is necessary for the growth and safety of the whole Australian nation.

Agrarian protest movements had been a feature of rural Australia from the late 19th century onwards. The Victorian Farmers Union (VFU), the Western Australian Farmers and Settlers Association (WAFSA), the Queensland Farmers Alliance and the New South Wales Farmers and Settlers Association (NSWFSA) were all active as political lobby groups at the start of the 20th century.

After Federation in 1901, Australian conservative politics was split between protectionist and free trade factions. Because of economic concerns, the farmers’ associations generally supported the free traders.

This changed in 1909 when a united anti-Labor Party bloc was formed through the fusion of the two groups into the Commonwealth Liberal Party (CLP). The new federal party agreed to support higher tariffs on imported goods. This was beneficial to local manufacturers but detrimental to primary producers such as farmers, who needed to buy foreign-produced equipment.

The Labor Party also endorsed this high-tariff policy, which meant there was no national political force that fully represented the rights of farmers and rural communities.

The small-scale farmers’ organisations became more militant after the creation of the CLP. This was intensified by droughts across the country in 1910 and the poor response from state and federal institutions.

In that year, the Labor Party won the federal, New South Wales and South Australian elections. Fear among conservative farmers associations of the ‘tide of socialism that was sweeping the world’, and the CLP’s exclusion of farmers from important areas of influence encouraged rural organisations to become more militant and political.

In the Western Australian elections of 1914, eight rural-oriented members were voted in and subsequently formed a Country Party in the Legislative Assembly. The idea of an amalgamated, national Country Party was gaining momentum.

Economically, the First World War was devastating for much of Australia but beneficial to its farmers. Foreign markets bought almost everything Australia produced but, because the nation considered itself to be in a state of total war, the government, through pools and marketing boards, assumed control of the sale and price of primary produce for the first time since the early years of the colony.

Farmers’ opinions of the marketing schemes were mixed, and their political organisations sought to bring about change.

From 1915, their push was to reform the pools’ administrations. Later, they focused more on farmer representation on the boards and, after the war was over, on directly pressuring government to continue them as permanent marketing agencies.

Through these efforts the farmers groups gained valuable political experience and the realisation that they could have significant political influence. This encouraged primary producers across the country to seriously engage with the idea of creating state and national Country Parties.

In the 1919 federal elections, the state-based Country parties won 11 seats in NSW, Victoria and Western Australia. This prompted the creation of the national Country Party in 1920 with the Tasmanian politician William McWilliams nominated as federal parliamentary leader.

McWilliams helped lay out the principles of the organisation stating: ‘we crave no alliance, we spurn no support, but we intend drastic action to secure closer attention to the needs of primary producers’.

In 1921, Earle Page was elected to succeed McWilliams as leader.

In the 1922 federal election, the Country Party gained 14 seats and secured the balance of power. Page negotiated a coalition with the Nationalist Party but refused to work with their Prime Minister, Billy Hughes and forced them to replace him with Stanley Melbourne Bruce.

Page intensely lobbied the Nationalists and secured five of the 11 Cabinet seats for the Country Party with himself as deputy and treasurer. In the four short years since their first federal election the Country Party had become integral to the running of the nation.

The Nationalist-Country Coalition could be acrimonious, as Page’s concern for the average farmer did not always integrate with Bruce’s policies in support of big business and employers. The coalition came under strain in 1929 when, after an election forced by widespread unrest over Bruce’s handling of labour relations, the government was defeated.

However, the coalition persisted, first when the Nationalists became the United Australia Party (UAP) in 1931 and then when the UAP became the Liberal Party in 1945.

Since then, the Country Party has always worked in coalition with the Liberals with the Country leader traditionally being the deputy prime minister when the coalition is in power.

In 1975, the Country Party changed its name to the National Party in an effort to gain popularity in urban areas.

Legacy of the Country Party

Since its creation the Country and now the National Party has consistently been involved at the highest levels of decision-making in this country. Much of the credit for this must go to their longstanding coalition with the dominant non-Labor party of the time.

The Country/Nationals have consistently lobbied for equality of services and lifestyle between cities and regions. As the Country Party leader Doug Anthony said in 1972: