Three of our prime ministers have held the position for only a short time. If a prime minister dies in office, a ‘caretaker’ is appointed until a new leader can be chosen.

The first of these ‘caretaker’ prime ministers was Earle Page, a co-founder of the Country Party. He took on the job for three weeks when Joe Lyons died in April 1939.

Earle Christmas Grafton Page was born in Grafton, New South Wales on 8 August 1880. He was the fifth of 11 children of Charles Page and Annie Cox, whose father was a blacksmith and coach builder.

After attending a government primary school in Grafton, he won a scholarship to Sydney High School, matriculated after a year, and entered the University of Sydney at only 15. He began studying arts, but changed to medicine, topping his final year.

After working as a house surgeon at the Royal Prince Alfred Hospital he returned to Grafton in 1903, where he built up an extensive country practice and opened a progressive private hospital. The X-ray equipment he ordered was among the first in NSW. He was also the first person in the district to own a car.

Page married Ethel Blunt in 1906, and they had five children. Page moved into different areas of business, buying a timber mill and dairy farms, and part-owned the Grafton Daily Examiner.

He became a well-known figure in the Farmers and Settlers Association. In 1915 he founded the Northern NSW Separation League, which aimed to achieve separate statehood for the north-eastern region of NSW.

Earle Page enlisted as a surgeon with the Army Medical Corps in 1916 and spent 15 months working in military hospitals in Egypt, England and France. He returned to Australia via Canada and the USA to inspect hydro-electricity projects. In 1918 he was elected Mayor of South Grafton and set up the Nymboida hydro-electric scheme.

Page was elected to federal parliament in the Cowper seat in the 1919 general election as an Independent, but with support from the Farmers and Settlers Association. He held the seat for the next 42 years through 15 general elections.

In January 1920 he joined with 10 other farmers elected to parliament to form the Federal Country Party (CP); he became its second leader in 1921 and retained the position for the next 18 years.

As Country Party leader Page did not align his party with either the government or the Opposition in 1921–1922. Rather, he took on the role of attacking the budget of William Morris Hughes’ Nationalist government.

When the Country Party refused to work with a government led by or including Hughes, Hughes resigned as Prime Minister and Nationalist leader in favour of Stanley Melbourne Bruce, whom the Country Party was willing to support.

Known as the Bruce–Page government, the Nationalist–Country Party coalition retained power through the next two general elections. Page served as Treasurer in this government from 1923 to 1929. 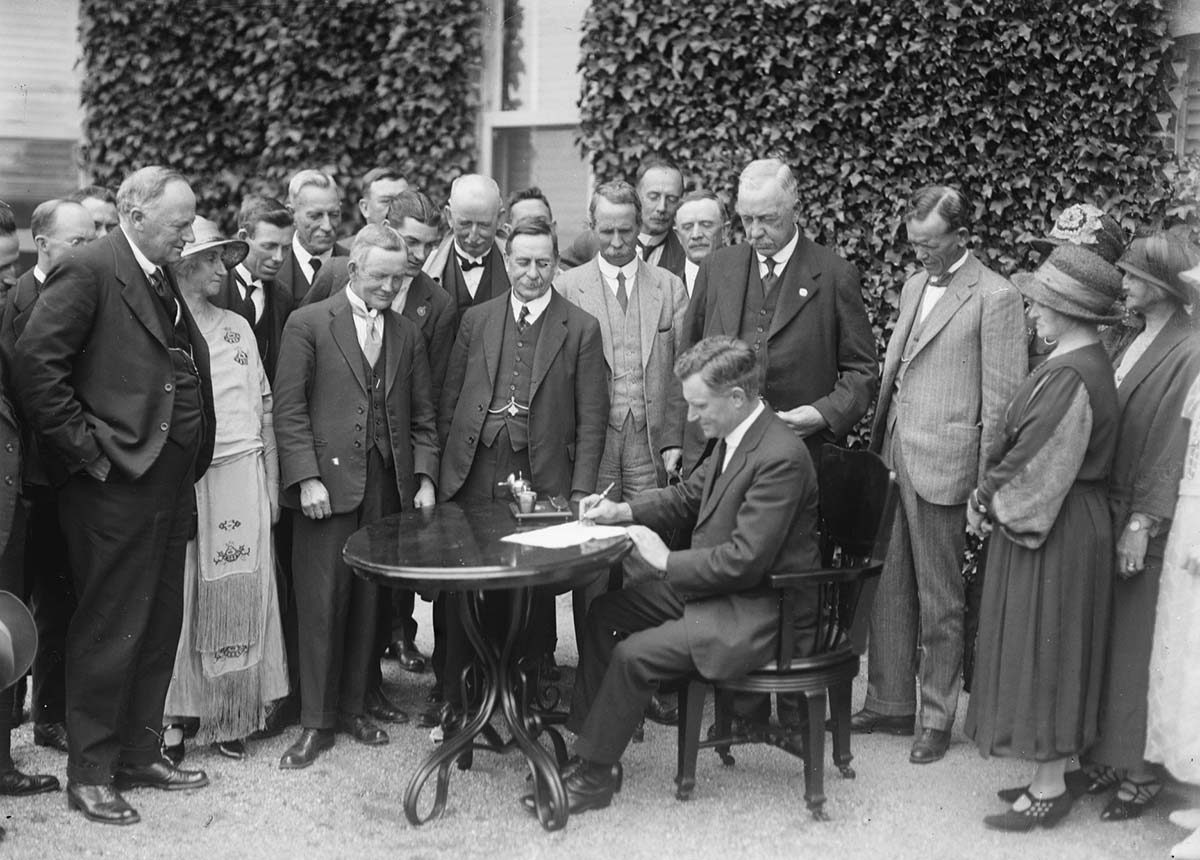 The Bruce–Page coalition adopted the ‘Men, Money, Markets’ policy for economic development within an Imperial framework. They worked to obtain labour and capital from the UK for expanding Australian industry to provide products to the British Empire, while protected by preferential tariffs.

The Bruce–Page government also oversaw the development of Canberra as the national capital; the beginning of the transfer to Canberra from Melbourne of federal government departments; and the first meeting of federal parliament in Canberra on 9 May 1927.

On 10 September 1929 the Bruce–Page government fell, when William Morris Hughes (who was expelled from the Nationalist Party in August) and five others voted with Labor against the Maritime Industries Bill.

At the subsequent general election on 10 October, the Nationalist Party was heavily defeated, and the Prime Minister, SM Bruce, lost his seat. James Scullin’s Labor government assumed office on 22 October 1929.

In November 1934 Page brought the Country Party into a coalition with Joseph Lyons’ United Australia Party. Page served as Minister for Commerce 1934–1939 and Minister for Health 1937–1939.

On the death in office of JA Lyons, Page was appointed Prime Minister in a ‘caretaker’ capacity. He spent 20 days in the position, from 7–26 April 1939, while the UAP sought a leader to replace Lyons. Page tried unsuccessfully to persuade SM Bruce to return to parliament (to replace Lyons).

When the UAP elected Robert Menzies as leader on 26 April 1939, Page refused to serve with him and proceeded to criticise Menzies in one of the most scathing of personal attacks ever made in federal parliament. Page accused Menzies of cowardice for not enlisting in the First World War and of hastening Lyons’ death through disloyalty to the former Prime Minister.

The attack on Menzies destroyed Page’s own career as a political leader. Displeasure among Country Party colleagues over his actions forced his resignation from the leadership of the party on 13 September 1939. Page was replaced as leader by AG Cameron, who took the Country Party back into coalition with the UAP in March 1940.

Page served in Menzies’ war cabinet from January–May 1941, and then as the Australian representative with the UK war cabinet 1941–1942.

Page was the Minister for Health in the Menzies–Fadden Liberal–Country Party coalition from 1949 until 1956, and as such was the architect of the government’s post-war health policy. He retired from cabinet in 1956 but remained in parliament as a backbencher until his death, spending his last years writing his memoirs, Truant Surgeon (1963).

Although dying from cancer, he was a candidate at the general election in 1961. He died in Grafton on 20 December 1961, 11 days after the election, not knowing that he had lost his seat after 42 years.