When Prime Minister John Curtin died in office in 1945, Chifley was elected by the Labor Party to take the job, which he inherited after an eight-day caretaker prime ministership by Deputy Leader Frank Forde.

After the war, Chifley, who remained Treasurer, introduced a number of social welfare reforms and laid a strong basis for postwar reconstruction.

Labor eventually lost the support of the electorate over the issue of strong government regulation of the economy.

Chifley was known to be a humble man, who never forgot the fact that he had been a train driver before he was a politician.

Joseph Benedict Chifley – always known as Ben – was born in Bathurst, NSW on 22 September 1885. Chifley’s parents were both of Irish descent. His father, Patrick Chifley, was a blacksmith. His mother was Mary Anne Corrigan.

Chifley lived and worked on his grandfather’s farm at Limekilns, near Bathurst, until he was 13, sometimes attending the local bush school. He then spent two years at the Patrician Brothers School, Bathurst, before starting full-time work as a cashier’s assistant in a general store.

He joined NSW Government Railways as a shopboy at 17, then worked as a cleaner and fireman before becoming a locomotive driver. At 24 he was the youngest first-class locomotive driver in the NSW railways. He was also an outstanding rugby union player.

At 27 Chifley became an advocate for his union, the Locomotive Enginemen’s Association. He was dismissed from the railways because of his part in the union’s national strike in 1917, but was reinstated as a cleaner on appeal.

After deciding to fight for unionists’ rights by entering parliament, he prepared himself by learning economics and finance. He became a highly competent and successful private investor and financial manager. He endeavoured to gain Labor preselection for state seats in NSW in 1922 and 1924 without success.

In 1914 he married Elizabeth McKenzie. 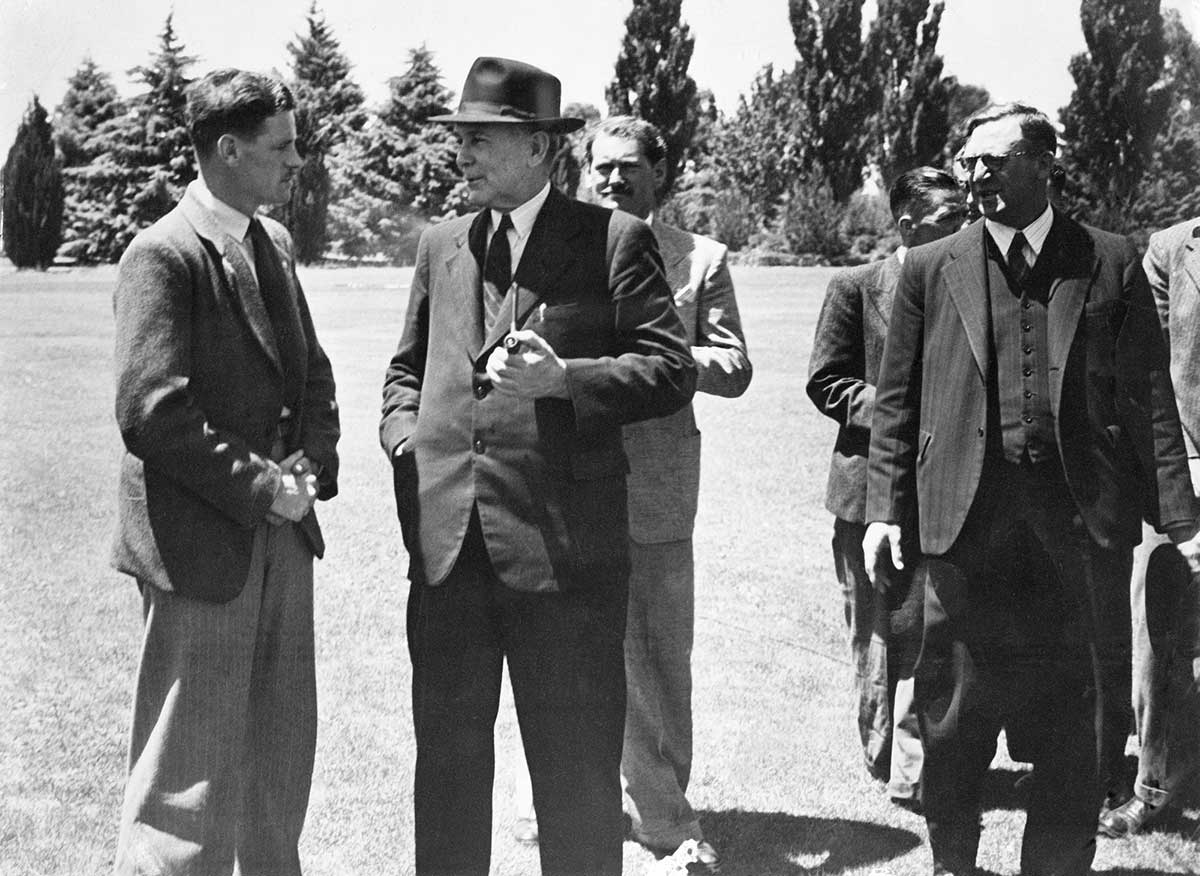 Chifley became a candidate for election to the House of Representatives in his home district electorate, Macquarie, in 1925, but was not elected. He won the seat at the 1928 election, and retained it in 1929 when James Scullin’s Labor government came to power, becoming Scullin’s Minister for Defence.

Chifley became embroiled in the long-running conflict within NSW Labor over policies for dealing with the Great Depression, which began in 1929. He supported the ‘Federal’ faction of the party against the ‘Lang’ faction (a group led by JT Lang, the NSW Premier).

Chifley lost his seat in the electoral landslide against Labor in 1931. Determined to defeat Lang, he contested Lang’s seat of Auburn at the 1935 state elections, but lost.

During his nine years of federal politics in the 1930s, he added to his reputation as a fine economist and administrator by serving as a member of the Royal Commission on Monetary and Banking Systems in 1935–1936, and as the director of labour supply and administration for the Department of Supply in 1939–1940.

Chifley became Treasurer in John Curtin’s Labor government, with major responsibility for gearing the economy to wartime production. He remained Treasurer until his loss of government in 1949. He also served as Minister for Post-war Reconstruction 1942–1945. 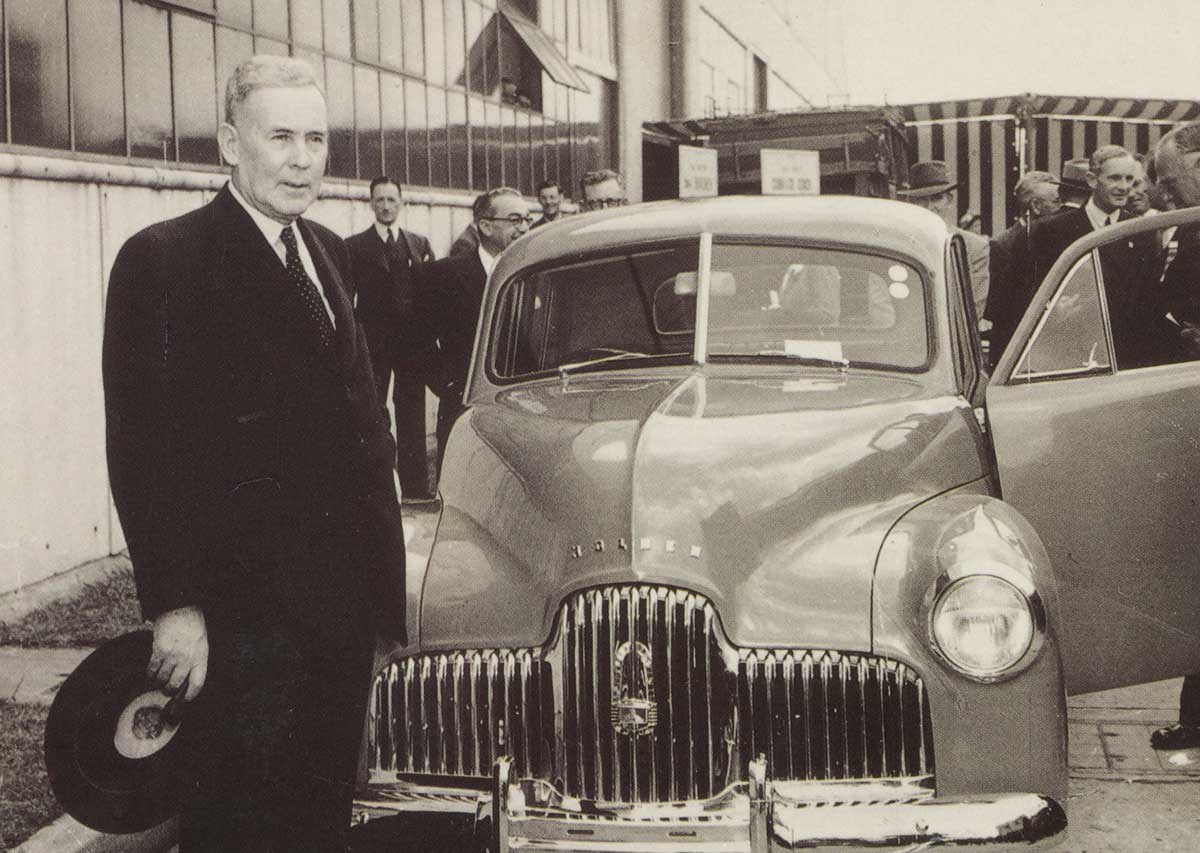 Prime Minister Ben Chifley at the launch of the first Holden car at the Fisherman’s Bend factory in Melbourne, 1948

He visited the UK, USA, Japan and New Zealand while on four overseas trips to attend conferences from 1946–1949.

Chifley was responsible for accelerating postwar reconstruction and in 1945 the Commonwealth government became a signatory to the charter setting up the United Nations.

Chifley’s government announced its objective of raising the Australian population to 20 million, and signed an agreement with the UK for free and assisted passages for immigrants, while the War Service Land Settlement Act introduced the soldier settlement scheme.

The first Holden car was launched by Chifley in 1948, and the Snowy Mountains Authority was founded in 1949.

Chifley retained office at the 1946 elections, but lost to Robert Menzies’ Liberal-Country Party coalition in December 1949.

The defeat followed a series of events and issues through which Labor’s popular support declined. These included a long-running coal strike, Communist influence in the union movement, the continuation of wartime rationing controls over the sale of petrol, and Chifley’s personal crusade to nationalise private sector banking.

Chifley continued in parliament as Leader of the Opposition after his defeat by Menzies. He died on the way to hospital after a heart attack in his hotel room in Canberra, 13 June 1951, while a ball celebrating the Jubilee of Commonwealth parliament was in progress in Parliament House.

The following notable legislation was passed during Chifley’s prime ministership: