1932: Height of the Great Depression, with 32 per cent unemployment 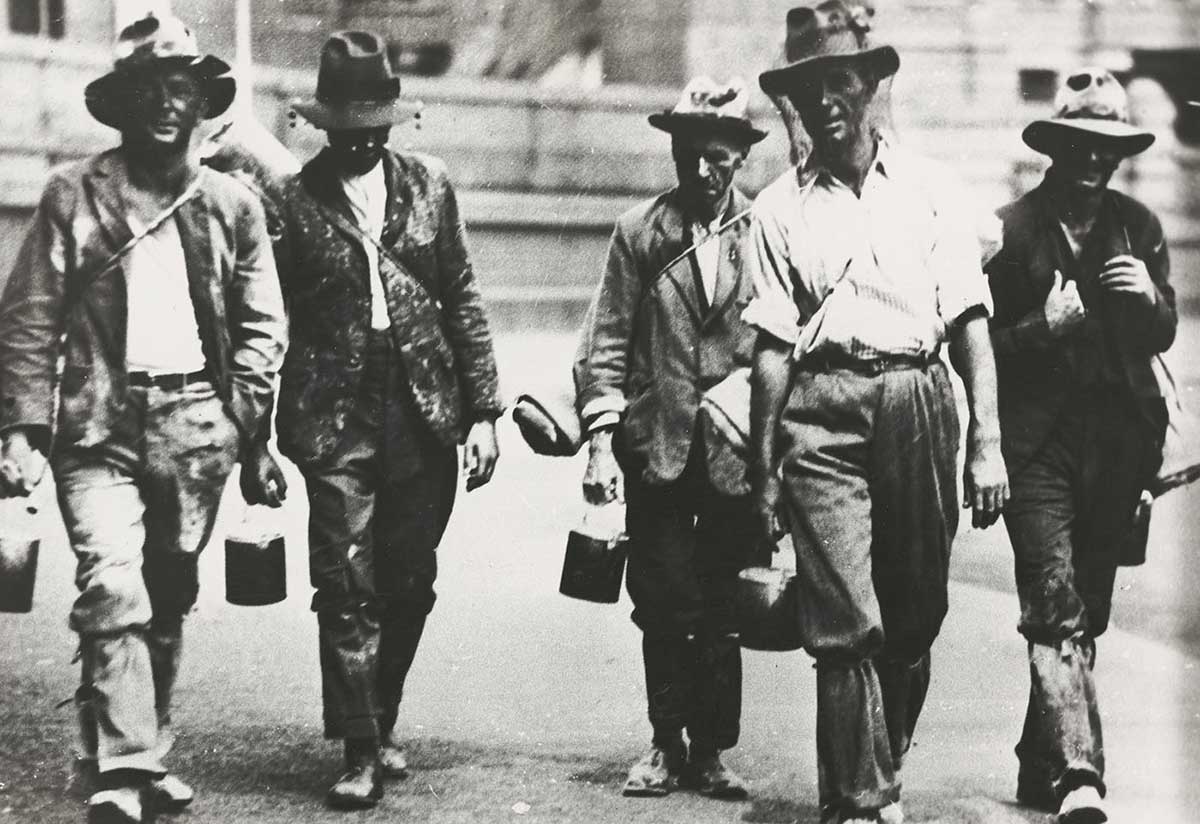 In the second half of the 1920s the Australian economy suffered from falling wheat and wool prices, and competition from other commodity-producing countries. Australia was also borrowing vast sums of money, which dried up as the economy slowed.

Then the Wall Street crash of 1929 led to a worldwide economic depression. The Australian economy collapsed and unemployment reached a peak of 32 per cent in 1932.

It took Australia almost a decade to recover from the Great Depression. 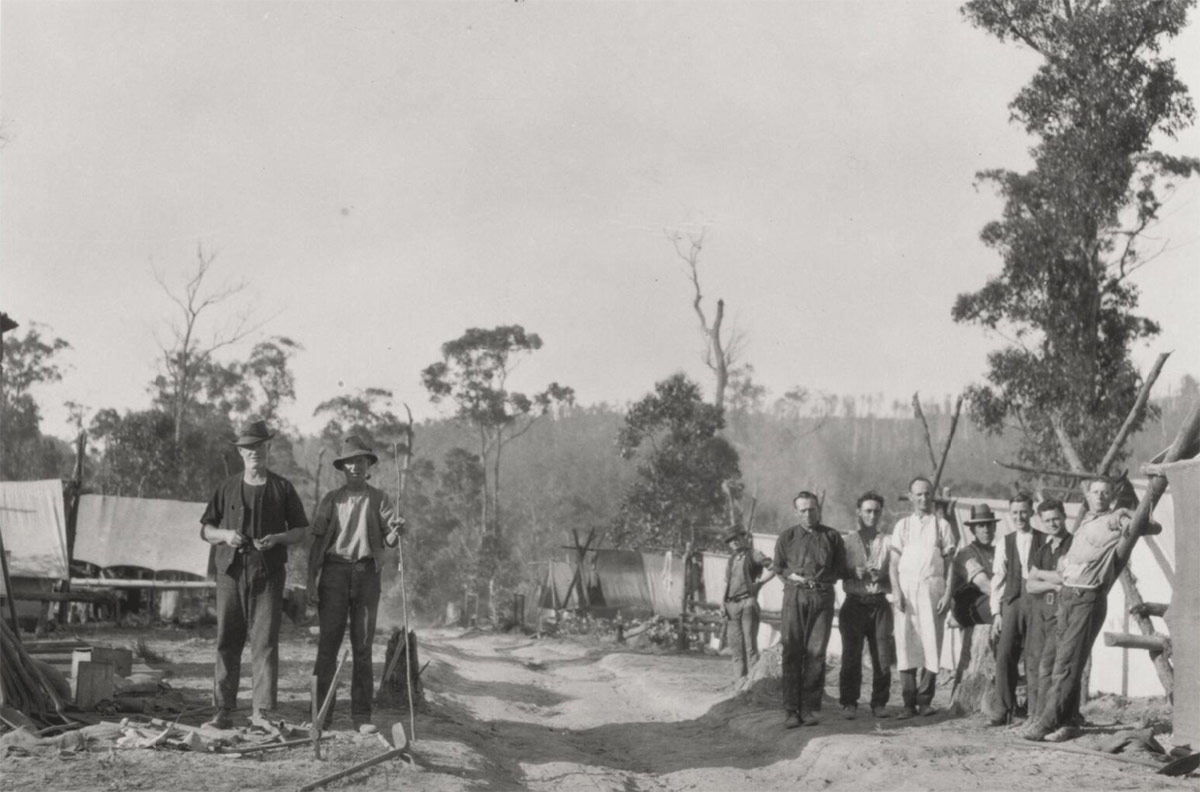 A ‘sustenance’ project during the Depression

Prosperity from the land

Australia experienced high inflation from 1919 to 1920 and then a severe recession until 1923. With the economy based on agricultural production, Australians identified prosperity with the land. Returned soldiers were resettled on rural blocks and more than 200,000 government-sponsored British immigrants arrived, many moving to country towns.

However, in the mid-1920s, just as Australia’s rural economy began to recover, so too did European countries affected by the war. The United States, Canada and Argentina began producing agricultural surpluses for market. This created a global oversupply of Australia’s major exports: wheat and sheep.

All through the 1920s federal, and especially state, governments maintained a heavy level of borrowing from overseas institutions, particularly when taxation revenues started to fall. Much of this money was directed towards public infrastructure works.

Australia was the largest borrower from the City of London during the decade, but when commodity prices fell from 1927 onwards, loan funds from London dried up.

In April 1925 Winston Churchill, as Chancellor of the Exchequer, returned Great Britain to the Gold Standard, whereby the pound sterling could be converted to gold at the rate it had been pegged at in 1913. However, the price of gold was over-estimated and British exports became more expensive on the world market.

The Australian pound was valued in relation to the pound sterling and so Australian exports were also affected by this change. Wool prices dropped steadily from the mid-1920s and wheat fell precipitously from 1930. The value of Australia’s wheat and wool exports halved in 1929 and 1930.

The 1927 federal budget left Australia with a £5.5 million deficit and Prime Minister Stanley Bruce sought to reduce spending and wages.

In 1928 federal Treasurer Earle Page handed down his sixth and most stringent budget with new taxes and deeper spending cuts to check the growing deficit.

The government also attempted to pass the Maritime Industries Bill, which would have abolished the Commonwealth Court of Conciliation and Arbitration. Strikes and labour unrest increased dramatically across Australia throughout 1928 and 1929.

The issue led to a vote of no confidence in parliament. The government lost, forcing Bruce to call and election.

The Labor Party portrayed Bruce as wanting to destroy Australia’s labour system and in the election of 12 October 1929 Labor won its then largest-ever majority in the federal parliament. James Scullin became the new prime minister and Bruce lost his own seat of Flinders, the first sitting Australian prime minister to do so.

However, on 24 October 1929, one week after Labor took power, the US stock market crashed. Amid global economic instability, this was the catalyst that sent countries around the world into depression.

The Scullin government tried a range of responses to the crisis: tariff barriers were raised; levels of migration reduced; and customs excise, the main source of federal government revenue, increased.

None had any effect and in August 1930 Scullin invited the director of the Bank of England, Sir Otto Niemeyer, to visit Australia to advise on economic policy. At a meeting of federal and state governments in Melbourne, Niemeyer recommended an approach based on conservative, balanced budgets and insisted that loan interest, much of it to British banks, be paid.

Niemeyer’s plan required another round of serious cutbacks to government infrastructure projects, wages, social welfare and defence spending. The state premiers and Scullin agreed to the plan.

The plans of both Theodore and Lang were rejected by the government and a schism developed in the Labor Party. 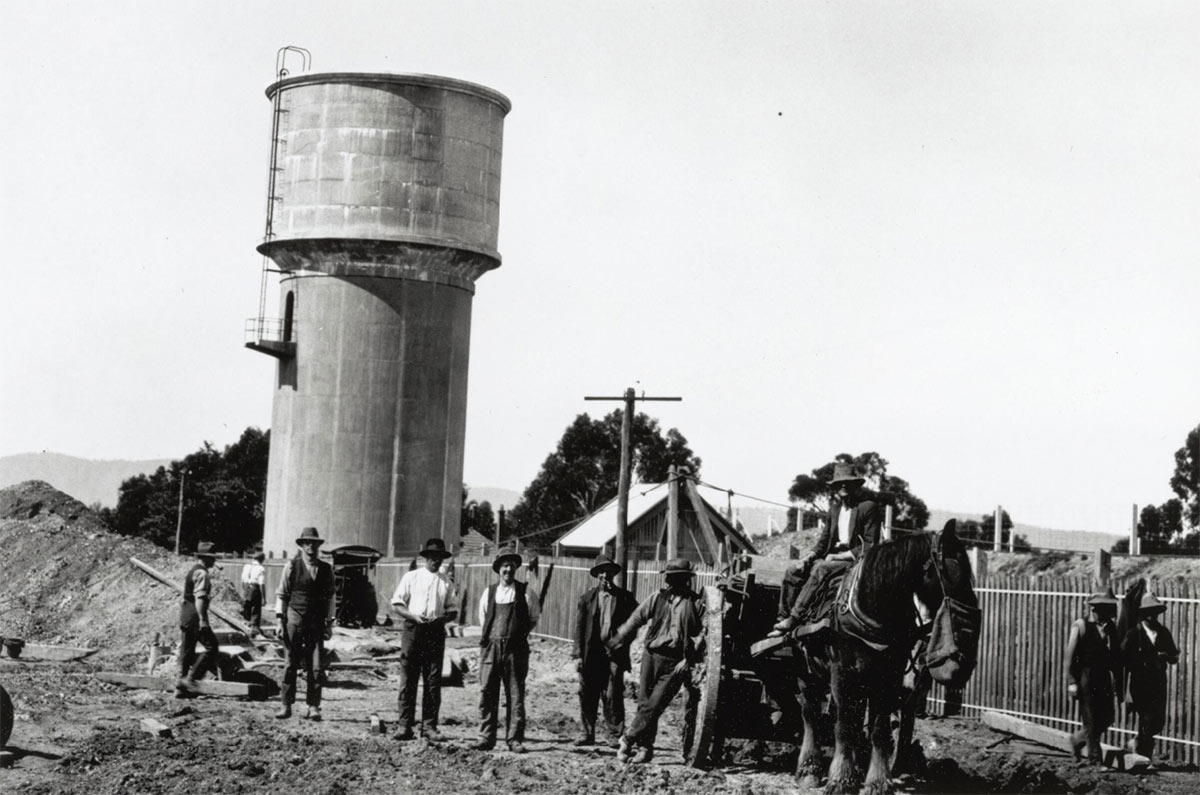 Sustenance works for Melbourne Metropolitan Board of Works

Premiers’ Plan and the Labor split

In 1931 the state and federal governments met to resolve the crisis and formulated the Premiers’ Plan, a strategy they claimed was based on the principle of ‘Equality of Sacrifice’ but which called for a massive 20 per cent cut in federal and state spending along with increased taxes.

What was intended as a compromise fragmented the party into three factions. Jack Lang and supporters of the loans default program were expelled and formed Lang Labor. Ted Theodore stayed with Scullin and formed a moderate approach to the crisis. Minister for Public Works Joseph Lyons led a fiscally conservative faction.

Lyons and his supporters resigned from government and joined the Opposition Nationalist Party to form the United Australia Party (UAP) in May 1931.

The UAP and Lang Labor successfully challenged the government in a no-confidence vote. The government fell and an election was called for 19 December 1931. The UAP won an overwhelming majority with an electoral swing of 15 per cent and Lyons became prime minister.

The UAP government under Lyons won federal elections in 1934 and 1937. The Depression was the defining event of Lyons’s time in office.

Despite the government’s attempts to manage the crisis, it was the recovery of major trading partners, especially Great Britain after it began rearming from 1936, and public works funded by state and local governments that brought about the slow recovery. By the start of the Second World War unemployment was down to 11 per cent.

In 1932 the official unemployment level reached a peak of 32 per cent. Hundreds of thousands of Australians were out of work.

The immediate effect was on individuals and families: children with not enough to eat; men, the traditional breadwinners, humiliated and powerless; women scrabbling to hold families together.

Suicide rates increased dramatically. In the absence of unemployment insurance, charity groups became the only source of relief but were unable to feed the overwhelming numbers of hungry.

National income declined by a third. More than 40,000 men moved around the country looking for work: setting up shantytowns on the edges of communities and camping in parks. The few jobs that did become available were cruelly fought over.

By 1932 more than 60,000 men, women and children were dependent on the susso, a state-based sustenance payment that enabled families to buy only the bare minimum of food.

One Queenslander commented, ‘Many spend more on a dog’. This was not unemployment insurance and was only available to people who had been without work for an extended period of time and who had no family assets.

For families still recovering from the pain of the First World War, the Great Depression was a cruel blow that scarred people for decades to come.

Legacy of the Great Depression

Memories of the Great Depression played a major role in Labor government policy in the 1940s. In 1942 income tax became a federal rather than state responsibility, giving the federal government more control of revenues.

In 1944 unemployment and sickness benefits were introduced. Full employment became a central goal for Labor and Coalition governments.

After the war, the government increased support for public housing, research and development, and higher education.

In 1949 the newly formed Liberal party under Robert Menzies took power and despite being an economically conservative government it continued many of the policies implemented by Labor.

'Heidlelberg Dress' - girl's fancy dress garment, hand-painted with cartoons and caricatures showing the work of the Heidelbe...This dress was worn by eight year old Patricia Chalcraft in a fancy dress competition around 1931. Her parents hoped it would win a cash prize so that they could afford to buy her new shoes. Alas, the dress won second prize, a book. Patricia's mother made the drerss out of old curtains and it was painted by her father with left...