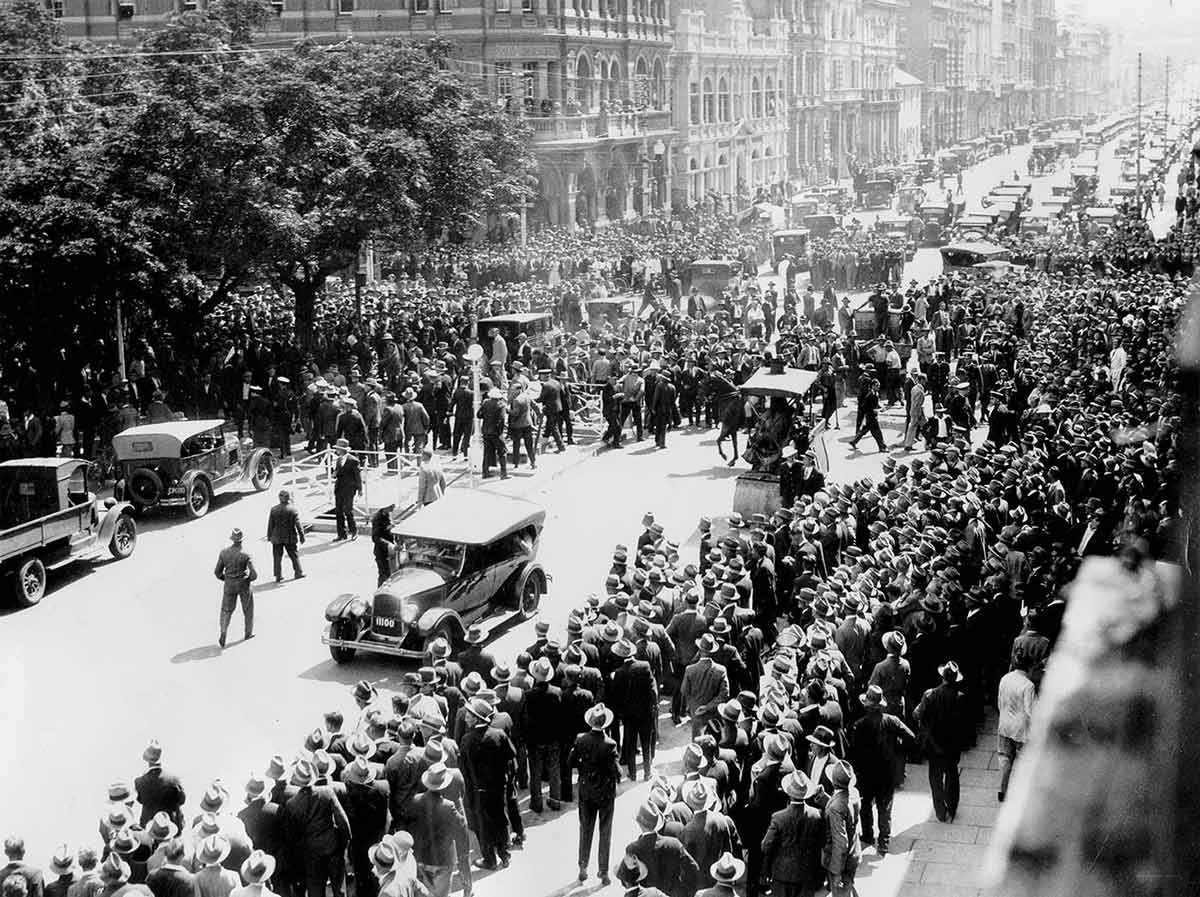 More than 1,000 unemployed men marching from the Esplanade to the Treasury Buildings in Perth to see Western Australian Premier Sir James Mitchell, during the Depression

With memories of the Great Depression still fresh in the nation’s collective psyche, the Curtin government announced in 1943 that it would create a national system of welfare, including unemployment and sickness benefits.

The following year, the government passed the Unemployment and Sickness Benefits Act and in 1945 distribution of benefits got underway.

I cannot forget how miserable those hundreds of thousands of men must have felt when they went back each night to their families after tramping the streets all day in search of work.

Unemployment, reduced wages or diminished work hours affected millions of Australians during the Great Depression of the 1930s. The only assistance for those needing help was provided by charitable bodies, but the overwhelming numbers of disadvantaged people highlighted the lack of capacity and inadequate administration of these organisations.

The economy improved in the last few years of the decade, with unemployment dropping to 11 per cent in 1939. Growing political engagement with social issues led to a bipartisan commitment to ‘full employment’ (an aspirational goal representing about four per cent unemployment).

This policy shift took place as the revenue-raising functions of the Commonwealth and the states transformed. In 1942 the federal government took sole responsibility for income tax, massively increasing its revenues and enabling an expansion of the Commonwealth’s role in social security.

John Curtin, Ben Chifley and HC ‘Nugget’ Coombs, the Director-General of Post-War Reconstruction, had all experienced the Great Depression firsthand and wanted to ensure that such an event never happened again.

Curtin was also inspired by the 1941 Atlantic Charter – an idealistic commitment by US President Roosevelt and British Prime Minister Churchill to create a postwar world free from deprivation and discrimination.

The Atlantic Charter stressed four freedoms for all humans: freedom of speech, freedom of religion, freedom from fear, and freedom from want. The inclusion of the last two liberties represented an early notion of economic security as a human right.

The United Kingdom and the United States had already implemented unemployment insurance schemes in the 1920s and 1930s respectively.

In 1943 the Curtin government announced its decision to introduce unemployment and sickness benefits. 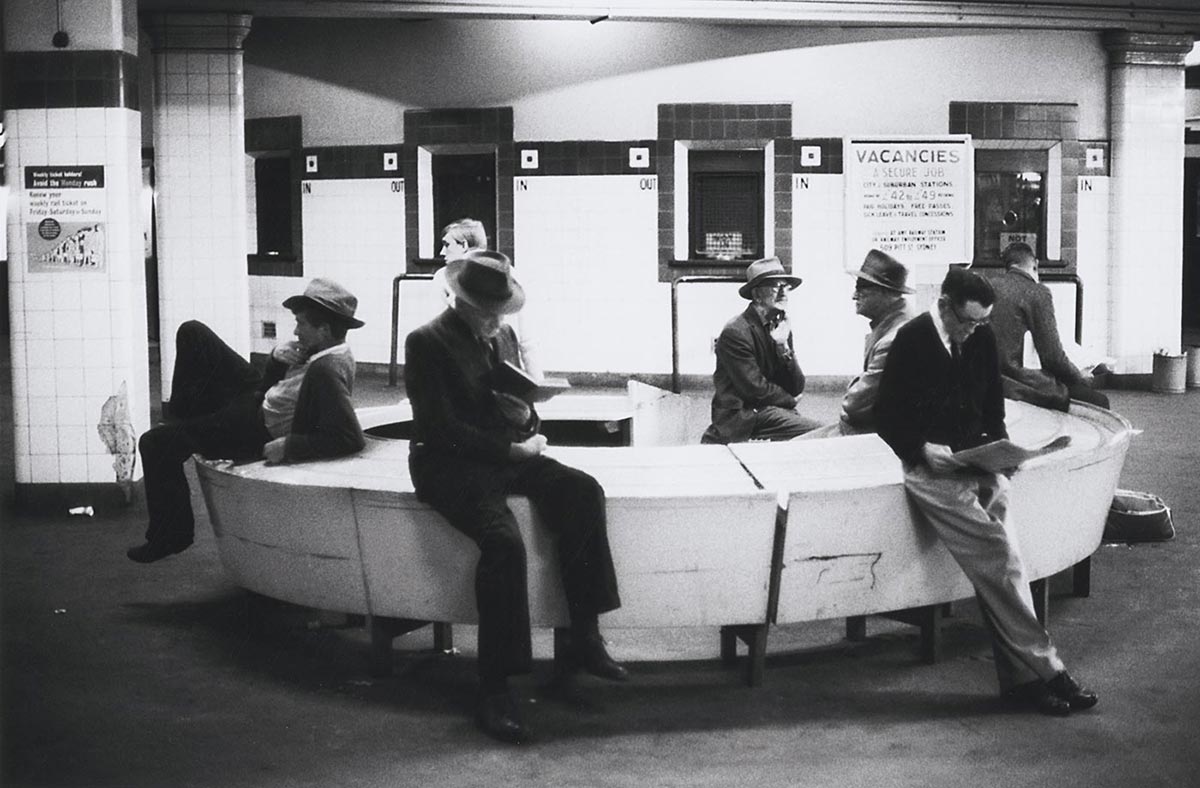 Legislation was passed in 1944 for a flat rate payment to all unemployed and those temporarily incapacitated because of sickness or accident. Distribution of benefits began in 1945.

Male and female adults aged 21 or over received 22 shillings a week. Singles aged between 18 and 20 received 20 shillings while singles under 18 received 15. Married men with a dependent wife could also get an extra 20 shillings.

Payments continued for as long as the unemployment or sickness lasted, but could be conditional on the beneficiary undertaking training, undergoing a medical examination or doing work as required.

The legislation did not pass unopposed. The Leader of the Opposition, Robert Menzies, sought a major amendment to the Act that would have made the system a contribution-based one, operating more like an insurance scheme.

Menzies believed such a scheme would be cheaper to run, and would prevent those in need from suffering a loss of self-respect by having to prove their poverty.

This suited the Curtin government’s drive for social equality and became a catalyst for the ’14 powers’ referendum of 1944, which asked Australians to give the federal government expanded responsibilities in employment, health, welfare, regional and urban development, trade and industry regulation and Aboriginal rights for five years after the declaration of peace.

All of these powers were crucial to Curtin’s vision for rebuilding Australian in the postwar world. However, the public voted decisively against the referendum’s proposal.

Nevertheless, there remained general support for the idea of federally dispensed welfare, or social security. This gave rise to the Unemployment and Sickness Benefits Act that was introduced the same year, and was followed by consolidated social security legislation in 1947.

Australia had transformed itself from a country with piecemeal social support to a fully-fledged welfare state.

Brian Dickey, No Charity There: A Short History of Social Welfare in Australia, Allen and Unwin, Sydney, 1987.