1791: Establishment of the whaling industry in Sydney

Britannia, a whaling ship that brought convicts and supplies to Sydney as part of the Third Fleet, was the first ship to harpoon a sperm whale off the Australian coast, in October 1791.

The whaling industry helped the fledgling colony survive and the industry flourished until a downturn in the 1850s and the eventual overharvesting of many species. The last whaling station in Australia closed in 1978.

A good part of the capital which had [been] so lavishly employed in the import trade, they are gradually diverting into that safer and infinitely more productive channel – the oil-fisheries … the whaling merchants are public benefactors, entitled to the gratitude of the whole community. They are stopping the inlets of Australian poverty, and opening those of Australian wealth.

Whales are a totemic animal for many coastal Indigenous groups. There is no evidence that Aboriginal and Torres Strait Islander peoples actively hunted whales, but beached whales were a valuable source of food, oil and other products. When commercial whaling began in Australia, Aboriginal people played an active role. 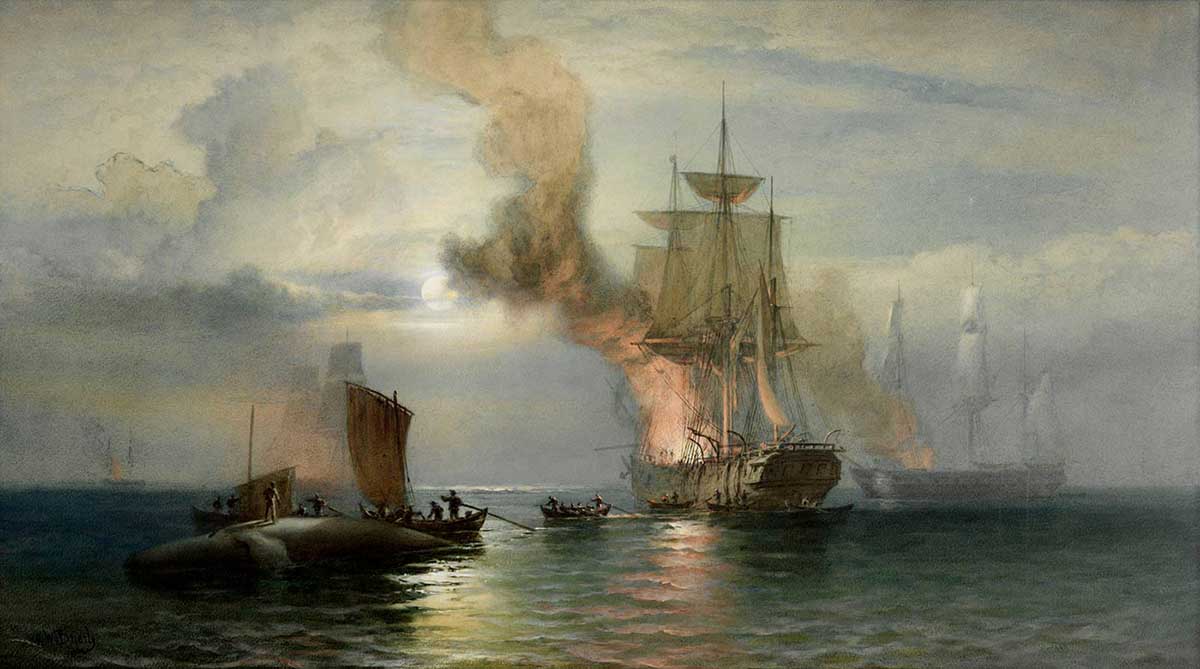 South Sea Whalers boiling blubber. Boats preparing to get a whale alongside by Oswald W Brierly

The Basque population of what is now northern Spain and south-western France are the first people known to have hunted whales commercially. Their hunts began around 1000 CE in the waters off the Iberian Peninsula.

By the 1530s they had established a seasonal settlement for whale hunting and processing at Terra Nova on the coast of Labrador in what is now Canada.

From 1611 as whale and cod populations around Terra Nova diminished, the Basque shifted their fishery to Spitsbergen in the Arctic. The area proved extremely productive and gained the attention of British, Dutch and Danish companies, which all sent ships to the area.

Much of the whale hunting and processing capacity that Britain developed in the 17th century shifted to their American colonies of Massachusetts and New York in the 18th century.

England lost these colonies in the American Revolution. In 1775 an embargo was placed on all exports to Britain including whale oil.

The embargo prompted Samuel Enderby, who had been heavily involved in the British–American whale trade through his fleet of ships, to investigate the possibility of whaling in the untried waters east of the Cape of Good Hope (the southern tip of Africa).

Captains sailing the Indian Ocean recounted seeing large numbers of sperm whales, which was the most prized species because of the quality of their oil. However, the British East India Company, the largest and most powerful company in the world at that time, had a monopoly on all trade in those waters.

Enderby and his business partners Alexander Champion and John St Barbe spent years petitioning the Committee of the Privy Council for Trade and Plantations (the government body responsible for Britain’s trade regulation) for the right to harvest whales in the Pacific and Indian oceans. In 1789 permission was granted.

Whaling in the Pacific

The first whale harpooned in the Pacific Ocean was taken by the ship Emilia off the coast of South America on 3 March 1789. Emilia returned to England with a lucrative cargo of 140 tonnes of sperm whale oil. Enderby wrote, ‘From [her captain’s] account the whales of the South Pacific are likely to be the most profitable’.

The success of this expedition led Enderby to petition British Prime Minister William Pitt to remove all restrictions imposed by the East India Company and open up the Pacific fishery.

The First Fleet arrived in New South Wales in 1788 just as the international whaling industry was rapidly expanding to meet the increasing demand for whale oil that would continue throughout the late 18th and early 19th centuries.

Until the development of petroleum in the 1850s, whale oil was the primary machine lubricant and preferred lamp oil in Europe and North America.

While Enderby was at the forefront of the international whale oil business, he also saw another commercial opportunity, noting that whaling ships were travelling to the South Pacific with no cargo before returning fully laden.

Transporting convicts and supplies to the newly established colony would provide his ships with a profitable cargo for their outward voyage.

The First Fleet had been arranged and financed through government channels. However, private contractors provided the ships, rations and crew of the Second Fleet, resulting in appallingly high death rates among the convicts.

Enderby lobbied the British Government to award the contract for transporting convicts to NSW to the whaling industry, and then let the whalers hunt in the waters of the South Pacific before returning to England with their cargoes of oil.

In early 1791 the Third Fleet set sail for Sydney. Eleven ships transported 1716 convicts. When their human cargo had been delivered, the William and Ann, Mary Ann, Matilda, Salamander and Enderby’s own ship Britannia went whaling.

Their success saw the start of the Australian whaling industry and Eber Bunker, captain of the William and Mary, went on to become a leading figure in the early colony.

Whaling in the early colony

Whaling became an essential part of the New South Wales economy and culture. Whalers were the most frequent visitors to the colony in its first decade.

Whaling was Australia’s first major industry with thousands of men and hundreds of ships eventually involved in the trade.

Whale oil and bone products were ideal commodities for the new colony as they were high-value items that could survive months at sea.

The focus of South Pacific whaling had been along the South American west coast, but the industry shifted west after war was declared between Spain and Great Britain in 1797. With British ships unable to buy provisions in the Spanish colonies, Sydney became a major whaling port.

British whalers were soon joined by Americans in the South Pacific, but it was still a few years before Sydney-based ships became involved in the trade.

Whaling was an expensive industry: fully outfitting a suitable ship cost more than £10,000. Business people were more likely to invest in the less costly sealing industry.

The discovery, with the settlement of Hobart, that the Derwent River estuary was a breeding ground for the southern right whale encouraged the launch of the first Sydney-owned whaler, the King George, in June 1805.

Small-boat, shore-based whaling conducted around Tasmania and in the bays of the south-east mainland grew rapidly. The first Sydney-based, oceangoing sperm-whaler Argo, owned by the pastoralist John Macarthur, sailed out of Sydney in 1806.

The peak of Australian whaling activity was between 1820 and 1855, with up to 1300 men working in the industry each year. With the 1851 discovery of gold in Australia, however, sailors deserted their ships en masse to travel to the goldfields. As petroleum increasingly replaced whale oil throughout the 1850s, the industry went into decline.

An industry that had provided New South Wales with 52 per cent of her exports in 1832 provided less than one per cent by 1855.

Legacy of the whalers

The whaling industry helped the fledgling colony of New South Wales survive, as the whaling ships brought much-needed food and supplies to the colonists from the 1790s. Whaling went on to become the colony’s first viable industry at the turn of the 19th century. Even into the 1820s whaling was as financially important as pastoralism.

The push to find productive whaling grounds, especially by the private companies involved in bay-based hunting operations, led to some of the first intensive European exploration of the Australian coastline.

Despite the downturn during the 1850s, whaling continued well into the 20th century with technological changes radically increasing the productivity of the whaling fleets. This efficiency led to the catastrophic overharvesting of many whale species and a public outcry to halt the industry.

Australia is today a leading member of the International Whaling Commission and deeply engaged in the fight against whaling.