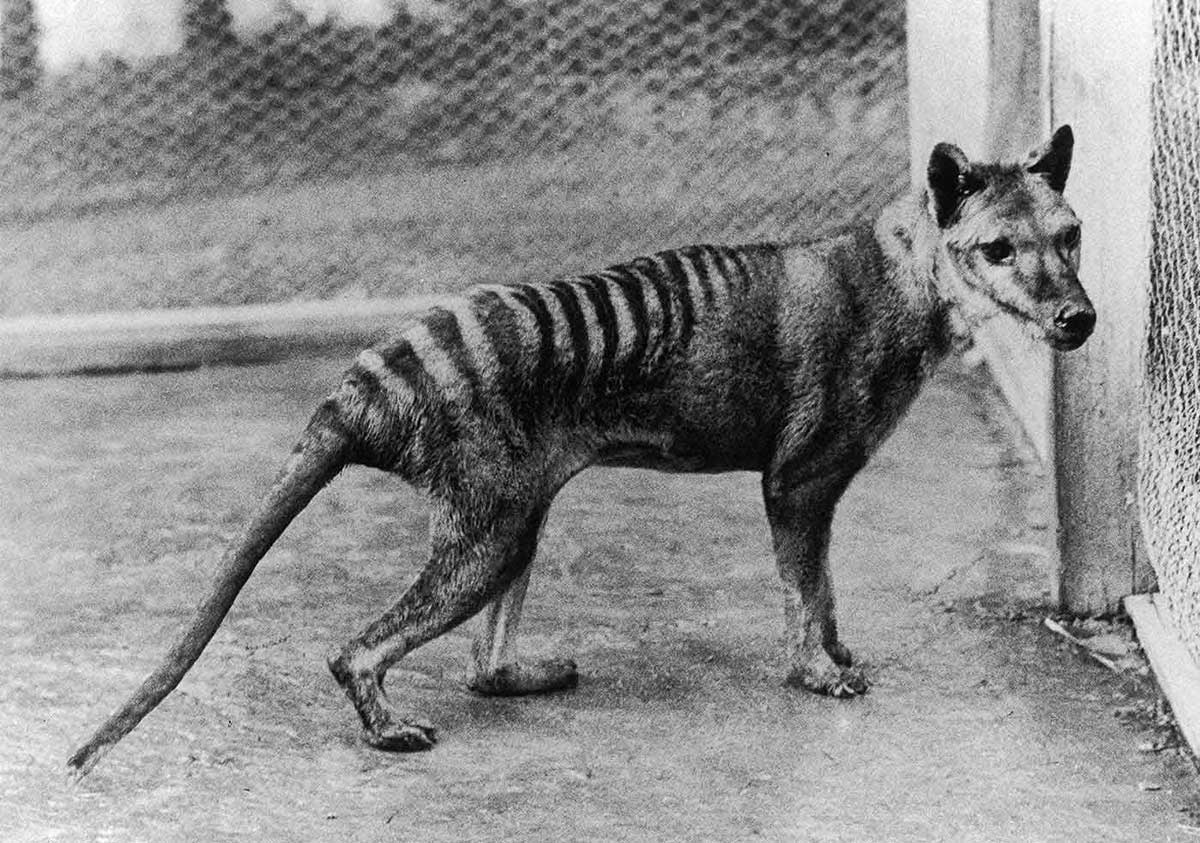 Thylacine at Beaumaris Zoo, Hobart, about 1936

On 7 September 1936 only two months after the species was granted protected status, the last known thylacine died from exposure at Beaumaris Zoo in Hobart.

It is estimated there were around 5,000 thylacines in Tasmania at the time of European settlement. However, excessive hunting, combined with factors such as habitat destruction and introduced disease, led to the rapid extinction of the species.

Has anybody seen a Tasmanian tiger lately? This is a question which the Animals and Birds Protection Board will shortly cause to be circulated throughout the state. Fears exist that this unique specimen of fauna may now be extinct … Mr A.W. Burbury said there was no reliable evidence that the Tasmanian tiger was now in existence.

The name thylacine roughly translates (from the Greek via Latin) as ‘dog-headed pouched one’.

The world’s largest marsupial carnivore, the thylacine was commonly known as the Tasmanian tiger, due to the distinctive stripes on its back.

Despite its fierce reputation, the tiger was semi-nocturnal and was described as quite shy, usually avoiding contact with humans.

The fossilised remains of thylacines have been found in Papua New Guinea, throughout the Australian mainland and Tasmania.

A number of factors, including the introduction of the dingo, led to the extinction of the thylacine in all areas except Tasmania about 2,000 years ago. The thylacine population in Tasmania at the time of European settlement is estimated at about 5,000.

The establishment of the first colonies in Tasmania in the early 1800s also brought the farming industry. Settlers cleared large areas of land and cultivated livestock such as sheep and cattle.

Despite evidence that feral dogs and widespread mismanagement were responsible for the majority of stock losses, the thylacine became an easy scapegoat and was hated and feared by the Tasmanian public.

As early as 1830 bounty systems for the thylacine had been established, with farm owners pooling money to pay for skins. In 1888 the Tasmanian Government also introduced a bounty of £1 per full-grown animal and 10 shillings per juvenile animal destroyed. The program extended until 1909 and resulted in the awarding of more than 2,180 bounties.

It is estimated that at least 3,500 thylacines were killed through human hunting between 1830 and the 1920s. The introduction of competitive species such as wild dogs, foreign diseases including mange, and extensive habitat destruction also greatly contributed to thylacine population losses.

Note: Researchers in 2022 confirmed it was a myth that the last thylacine in Beaumaris Zoo, Hobart, was a male or named Benjamin.

Last of its kind?

The last known shooting of a wild thylacine took place in 1930, and by the mid part of that decade sightings in the wild were extremely rare. Authorities from scientific and zoological communities became concerned about the state of the decimated thylacine population and pushed for preservation measures to be undertaken.

However, a shift in public opinion and the start of conservation action came too late. The species was granted protected status just 59 days before the death of the last known thylacine, which died in Hobart's Beaumaris Zoo from suspected neglect on 7 September 1936.

Further efforts to capture specimens for zoos and museums were unsuccessful and none were ever found.

Since then, many expeditions have been organised to search for the thylacine in the Tasmanian wilderness and there continue to be many reported sightings by people who believe the animal is still about.

Despite this, there is no conclusive evidence of the continued existence of the thylacine and the animal has been officially extinct since 1986.

Today controversy surrounds the thylacine and its potential as a candidate for ‘de-extinction’. Various scientists have undertaken research into cloning the Tasmanian tiger and bringing the species ‘back from the dead’. Many arguments surround this process but the reality of producing a healthy thylacine from available DNA samples remains extremely expensive and complex.

The National Museum of Australia holds one of the most significant thylacine-related collections in the world, including what is believed to be the only surviving complete ‘wet specimen’ (a biological specimen kept in preserving fluid). Other pieces include two thylacine pelts, skeleton, and more than 30 body parts that were preserved by the Australian Institute of Anatomy.

Pelt of a Thylacine (Tasmanian Tiger), which was shot in the Pieman River - Zeehan area of Tasmania in 1930This is the pelt of an adult thylacine, which was shot in 1930 and was one of the last wild thylacines. The thylacine (Thylacinus cynocephalus, or 'dog-headed pouched-dog'), also known as the 'Tasmanian tiger' or 'Tasmanian wolf' was a carnivorous marsupial. Fossilised remains of thylacines have been found in Victoria, South A...