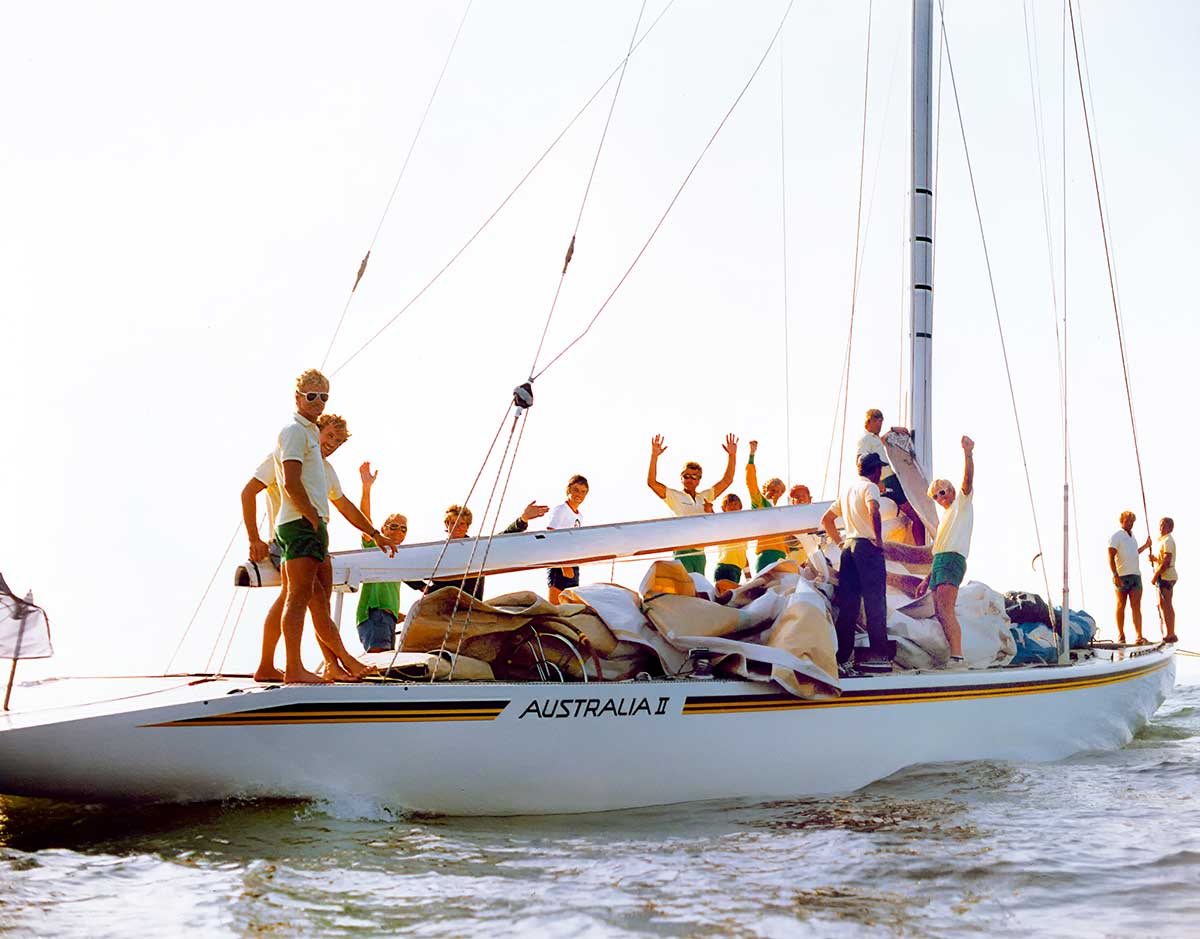 At 5.21pm on 26 September 1983, off the coast of Rhode Island, the yacht Australia II crossed the finish line to win the America’s Cup.

In the best of seven races, Australia II was 1–3 down after the first four races. In the final race Australia came from behind to win 4–3. It was the first America’s Cup race in 132 years that a country other than the USA won.

Any boss who sacks anyone for not turning up today is a bum.

The America’s Cup began life in England as the Royal Yacht Squadron’s £100 Cup, awarded to the winner of a race around the Isle of Wight.

In August 1851 the race was won by the schooner America (after which the Cup was subsequently named) representing the youthful New York Yacht Club.

The Earl of Wilton, Commodore of the Royal Yacht Squadron, had invited the Americans to take part, and theirs was the first foreign yacht to enter the race.

In a ploy repeated by the Australians in 1983, the Americans in 1851 played up the radical new design of their yacht and hinted that they had a secret advantage below the waterline. Actually, it was the combination of a new hull design and less sail aloft that gave America the edge.

With this single victory, America transformed yachting into an international competition. The New York Yacht Club Commodore John Cox Stevens and the members of his ownership syndicate sold the winning schooner before returning home.

They donated the trophy to the New York Yacht Club in 1857 under a Deed of Gift which stated that the trophy would be 'a perpetual challenge cup for friendly competition between nations'.

The New York Yacht Club’s first defense of the Cup took place in 1870. Britain repeatedly challenged for the Cup, with one competitor, Sir Thomas Lipton, mounting five challenges between 1899 and 1930.

As the years passed, it was the prospect of breaking this extraordinary winning streak that made the America’s Cup so coveted.

Australian involvement in the America's Cup

Britain and Canada were the only two nations to challenge for the Cup until 1962 when an Australian syndicate headed by Sir Frank Packer and based at the Royal Sydney Yacht club challenged in Gretel. Although the Cup was successfully defended by the Americans, the competition was close and Gretel was the first boat to win an America’s Cup match race since 1930.

The Australians returned in 1970 with Gretel II but were unsuccessful. The Gretel II campaign was famously controversial, particularly when having won a second race, the Australians were stripped of their win by the NYYC. Future captain of Australia II, John Bertrand, competed in his first challenge on board Gretel II.

Entrepreneur Alan Bond entered the Cup challenge process in 1974 with Southern Cross. While both Southern Cross and Australia failed in their three attempts, they provided crucial training for the historic 1983 challenge.

Her outstanding characteristic was a completely new winged keel design, which the team kept hidden until it was revealed to fans after the final race.

Australia II dominated the Challenger series, winning the Louis Vuitton Cup, and the NYYC embarked on a legal challenge to disqualify the Australian yacht. The boat was ruled a legal 12 Meter and allowed to participate in the regatta.

The America’s Cup is a best of seven race tournament. Australia II, skippered by John Bertrand, lined up for the first race against the American defender, Liberty, skippered by Dennis Conner, on 13 September 1983.

Race three was abandoned as neither yacht could complete the course in the time limit, and was restarted the following day. Australia II won by three minutes and 14 seconds, which brought relief and jubilation to the Australians and their supporters.

However, when Liberty won race four, it seemed that it might be all over for the Australian campaign.

Australia II had to win every one of the next three races to take the Cup. The fifth race started poorly, with the Australians giving the Americans a 37-second lead. However, the Americans lost this precious advantage due to equipment failure. Australia II won by one minute and 47 seconds.

Race six took place on 22 September 1983. Even if Australia II hadn’t gone on to win the Cup, it would have made history by winning this race. It was the first time a defender had gone three-all, and it was the biggest winning margin recorded.

About 2,000 boats turned out to watch the historic seventh race on 24 September 1983, which disappointingly, had to be abandoned due to unstable weather conditions. Rescheduled for 26 September 1983, the race started after only one postponement.

The Australians started well but lost their early lead. Things looked grim, with Liberty increasing its lead at every mark. Designer Ben Lexcen couldn’t bear to watch. He went below on the Bond launch, Black Swan, and stared at the NYYC officials’ boat.

Lexcen was only alerted to Australia II’s amazing comeback during the fifth leg by the change of demeanour of those on board the officials’ boat.

Two vital differences on this leg let Australia II regain the lead. The spinnaker was set and held better than Liberty, and Australia II was able to find a few extra lifts of wind.

Once in the lead, Australia II was under ferocious attack from Liberty on the final leg. The American yacht tacked 45 times in attempting to regain the lead. At 5.21pm Australia II crossed the finish line 41 seconds ahead of Liberty. 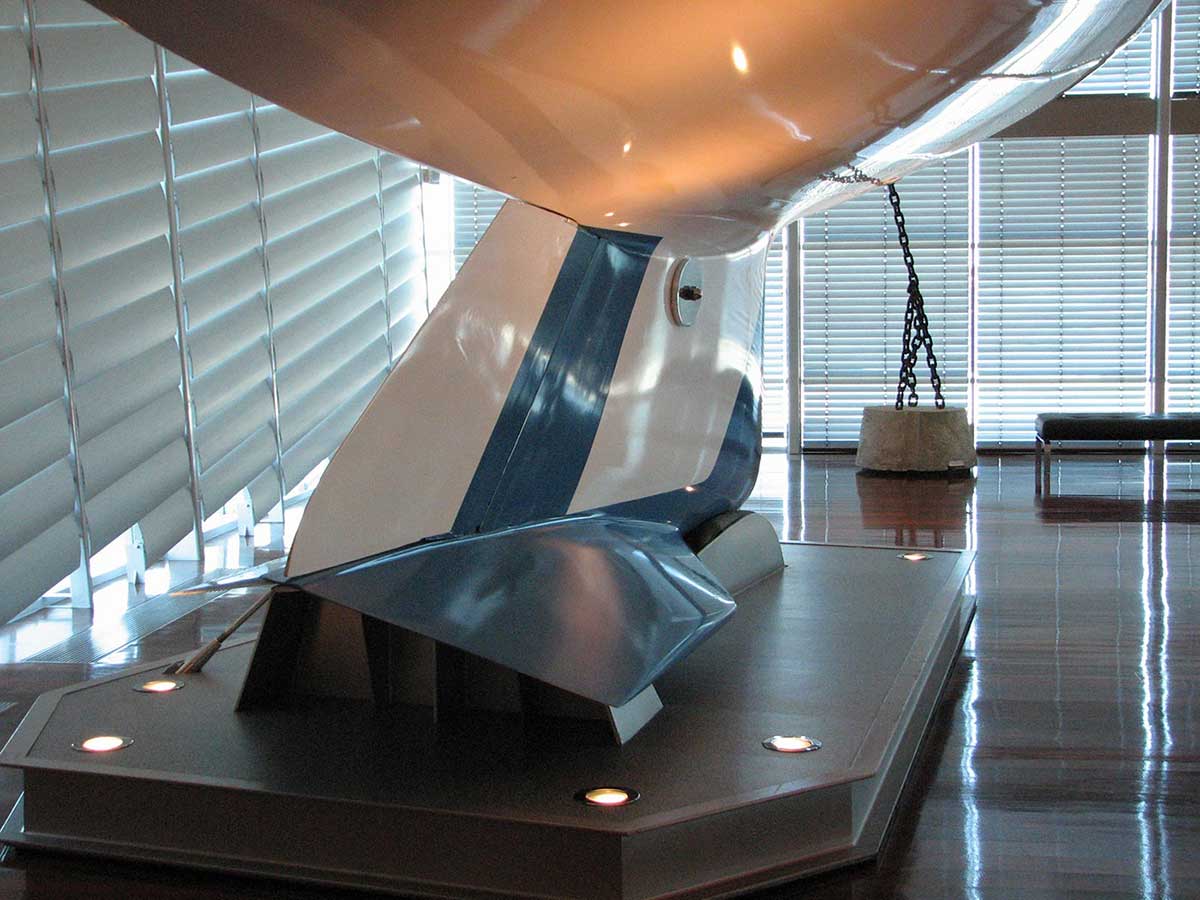 In Australia, the final race took place in the early hours of the morning, but much of the nation stayed up to watch the historic victory on television. The America’s Cup, previously of interest only to the yachting fraternity, suddenly had a galvanising effect on the public mood.

According to author Lou d’Apulget:

The 1983 challenge was a never-to-be-repeated summer-long epic that wiped wars, politics and economics from the pages of newspapers and brought the subject of boat racing into such unlikely places as the Oval Office of the White House.

On 15 May 1984 the federal cabinet decided to buy Australia II from Alan Bond.