A rare 1813 New South Wales holey dollar – the first currency minted in Australia – is held in the Museum's collection. 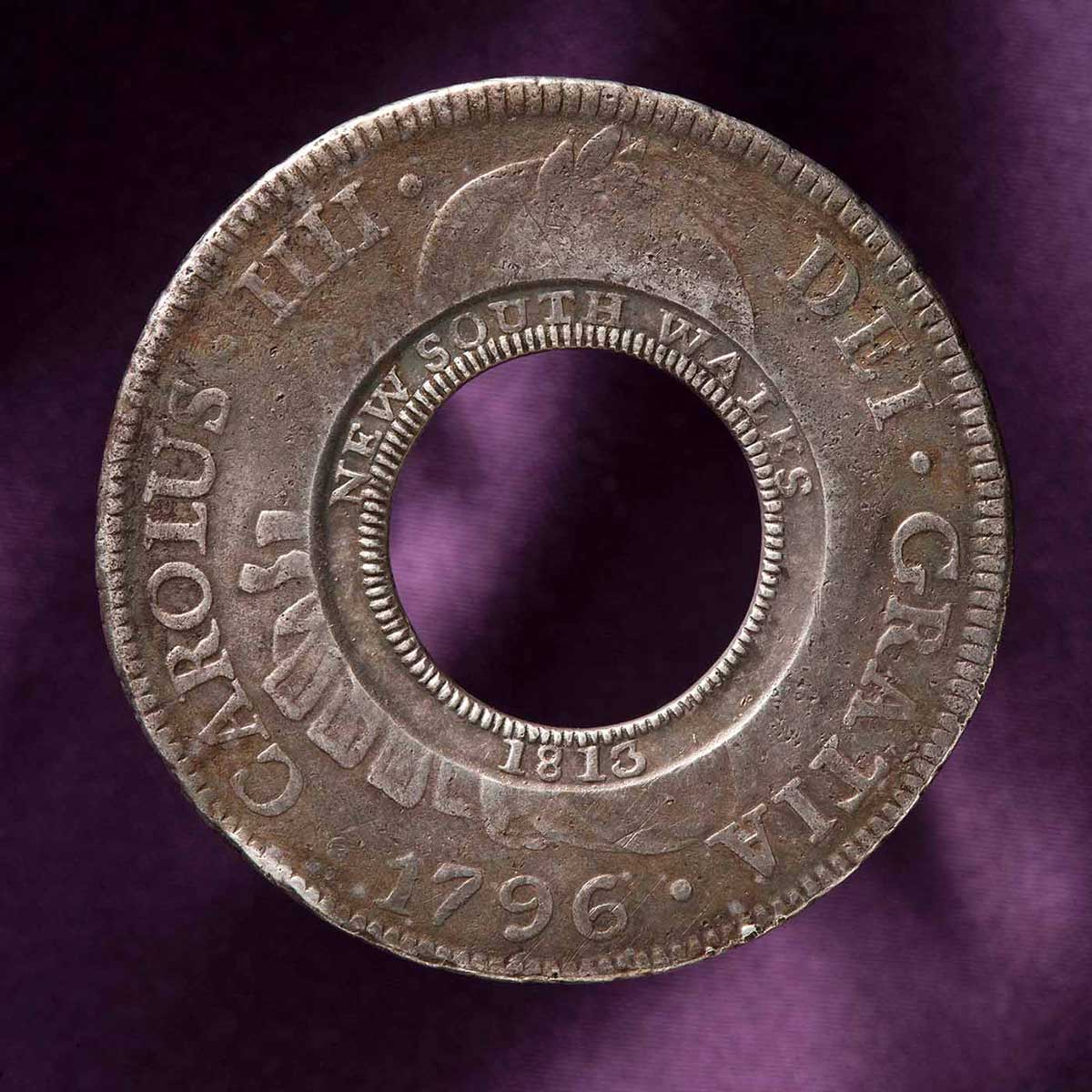 The holey dollar was created to address a shortage of coins in the new colony. Governor Lachlan Macquarie imported 40,000 Spanish reales in 1812 and had convicted forger William Henshall cut the centre out of each, to double the number of available coins.

The coins were counterstamped and the outer ring became known as the holey dollar, with the centre renamed the dump.

Macquarie set the value of the holey dollar at five shillings, with 15 pence for the dump. These coins went into circulation in 1814 and were replaced with sterling coinage from 1822. The National Museum's holey dollar is one of about 300 in existence.

'Holey dollars speak eloquently of the creative and improvisatory attempts to create an orderly administration in colonial Australia,' said National Museum Director Andrew Sayers when it was first acquired. 'The holey dollar we have acquired for the National Museum is a finely preserved example of this iconic object from the era of Macquarie.'

Foreign coins were common in the early years of the New South Wales colony. British coins circulated with Dutch guilders and ducats, Indian mohurs and rupees and Portuguese johannas. Much of this coin left the colony as a result of trade with visiting merchant ships.

In 1800 Governor Philip Gidley King issued a proclamation giving fixed values to the most common coins in circulation in New South Wales. This helped to ensure a ready supply of coinage for local trading and stabilised the value of each coin used in the colony.

King fixed the Spanish dollar at a value of five shillings but many still left the colony as payment for goods arriving on ships from the Americas, Asia and the Cape of Good Hope.

Governor Lachlan Macquarie set out to secure a reliable supply of coins for the colony. A special shipment of 40,000 coins arrived in the colony from Madras aboard the Samarang on 26 November 1812. These coins were Spanish silver eight reale coins, known as 'pieces of eight', and they were commonly used as an international trading currency.

It is likely Macquarie was aware of an earlier system used in another British colony, the West Indies, where captured Spanish dollars were cut and counterstamped so they could not be re-exported.

By having the centres stamped out of these coins, Macquarie distinguished them as belonging to the colony of New South Wales and prevented them from going straight out again. In doing so, he created the first currency minted in Australia.

William Henshall and the holey dollar

Convicted forger William Henshall was chosen to cut and counterstamp these coins. Henshall worked as a metal plater and cutler in England. On an 1811 New South Wales muster list he was listed simply as a 'convict', without reference to his trade. It is believed Macquarie probably learnt about Henshall's metal-working skills by reputation.

In researching the history of Henshall and the holey dollars, numismatic experts Peter Lane and Peter Fleig found that Henshall arrived in the colony of New South Wales after being sentenced in 1805 to seven years transportation for his involvement in counterfeiting.

He provided authorities with information about other forgers and ways of combatting the crime in exchange for an assurance his wife and family would accompany him to New South Wales. Henshall arrived in the colony and was granted an absolute pardon on 12 September 1812, six months before his sentence was due to end.

Macquarie provided Henshall with a workshop in the basement of a building known as 'The Factory' to make the holey dollars and dumps.

Macquarie initially anticipated that the task of converting the 40,000 Spanish coins would take three months, but the project took over a year to complete. Henshall had to experiment with making the necessary machinery, which proved difficult. It seems that a drop hammer, as opposed to a screw press, was used to stamp the coins.

Henshall stamped the coins with their new value and 'NEW SOUTH WALES 1813'. He incorporated his 'H' initial into the spray of leaves of the counterstamp design and also inscribed his initial between the words 'FIFTEEN' and 'PENCE' on the dump reverse dies.

The first batch of new coins was delivered to Deputy Commissioner-General David Allen on 25 February 1814. The final batch was delivered in August of the same year.

Henshall left the colony for England in 1817. It is not known what became of him. 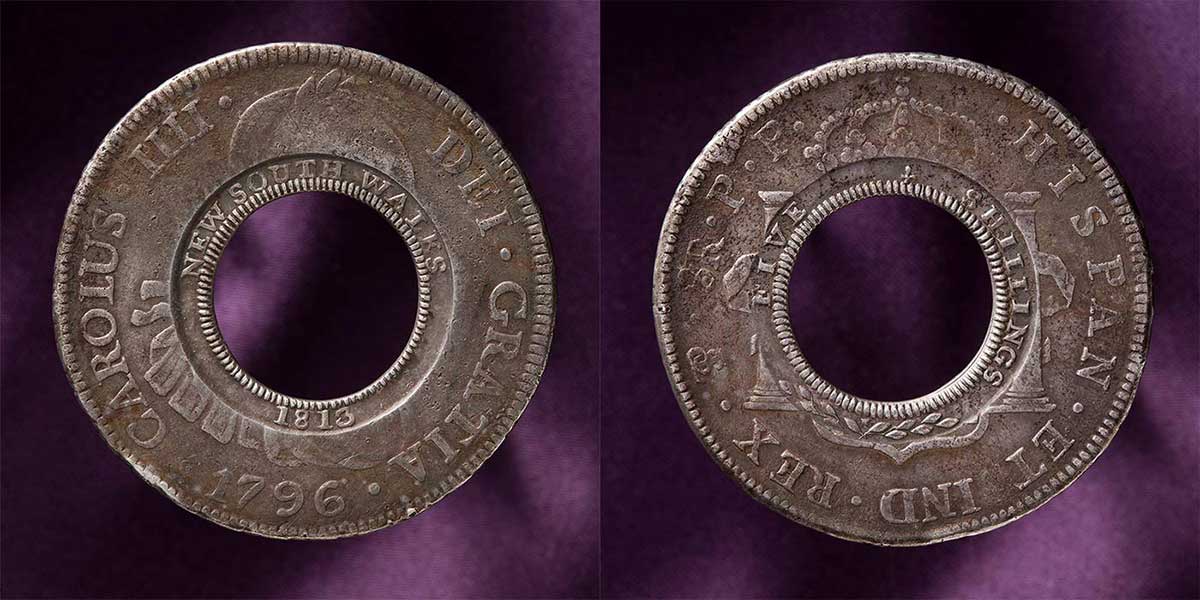 The reverse of the holey dollar (right), marked 'FIVE SHILLINGS', for the new colony

The New South Wales colonial administration began recalling the holey dollars and dumps and replacing them with sterling coinage from 1822. When the holey dollar was finally demonetised in 1829, most of the 40,000 coins in circulation had been exchanged for legal tender. The coins were then melted down into bullion.

The few coins that survived were typically in the hands of wealthy colonists, banks or companies who could afford to hold on to the demonetised currency.

Experts estimate that around 300 holey dollars and just over 1000 dumps remain today. Of the almost 300 known holey dollars, the majority of the host coins were struck in Mexico. This example was struck in Potosi, Bolivia. Lane and Fleig have identified it as one of only five surviving holey dollars to originate from that mint.

An early owner of the coin purchased by the National Museum was Roy W Farman, a renowned numismatist collecting in the 1930s and 1940s. He sold this coin, along with 15 other holey dollars, to Ramond Jewell, probably in the 1950s. Jewell, a country motel manager, was the foundation president of the Numismatic Association of Australia.

In a 1993 obituary Peter Lane wrote that Jewell was an active member of the Numismatic Association of Victoria and a collector of stamps and coins, most notably holey dollars and dumps.

Jewell moved out of collecting stamps and coins in the 1960s to pursue other collecting areas, including Phantom comics and Worcester porcelain. He sold this particular holey dollar at auction in 21 July 1965 to another private collector.

By the 1820s England had improved coin production and adequate supplies were made available to its colonies. Local banknotes and paper tokens were issued by the Bank of New South Wales and circulated from its establishment in 1817.

In 1853 Queen Victoria consented to the establishment of a branch of the Royal Mint in Sydney. Other branches followed in Melbourne in 1872 and Perth in 1899. Australia's first gold sovereigns and half sovereigns were turned out in 1855.

By the late 1870s Sydney and Melbourne gold coins were accepted as legal tender in Britain and most other colonies using British coin.

The mining of gold from the 1850s triggered prosperity and the development of banking across Australia. In 1851 there were eight trading banks and 24 branches.

By 1890, 33 new banks had been launched and the number of branches exceeded 1500. Commercial banks issued bank notes but they did not constitute a national paper currency and the public remained wary.

A banking crisis in the early 1890s produced calls for a national or central bank, uniform banking laws and a national currency. During the debates over Federation the matter of a national currency was left unresolved and Australia's currency remained a mixture of British copper, silver and gold coins.

It was not until 1910 that all new Australian currency was marked 'Commonwealth of Australia' and British currency was progressively withdrawn. In 1966 a new decimal system introduced coins and notes that depicted Australian imagery while retaining the image of the British monarch.

1813 Holey dollarThis holey dollar is an early example of the first coins minted in Australia. In the early years of New South Wales, coins were scarce so British and foreign coinage circulated side by side. Colonial administrators soon found that their sterling coinage as well as foreign coinage was often 'exported' in order to pay for goods ...